It's back from the dead - more photos from the Japan archives!  Just when you thought I was finally done with my series of incessant ramblings and photo sneezes.

In all seriousness, there are still lots of great places I haven't blogged yet, even in the shadow of the the amazing areas I saw in the previous posts on Kiso Valley.  Up ahead are all the areas from Western Japan that we visited, starting with this short series from Nara.

Less than an hour from Kyoto, Nara was the capital of Japan during a brief period long before the glory days described in Shogun.  Most of its remaining cultural icons are within or centered around the main park of modern-day Nara.  Within that park are approximately 1200 wild deer that roam freely.  The deer are extremely tame, and have evolved over hundreds of years of interactions with Japanese people to where they will even approach you and bow for food.  They have existed in the park for so long that they are considered sacred, making it a serious crime to bring harm to one.

Jer and I got up early the next morning after getting to Jason's apartment, and 4 relatively short and well-transitioned train rides later, we were in the heart of Nara.  After hoofing it for about a mile through the relatively urban center of Nara, crowds of people easily indicated when we were nearing the park.

As an advance warning... a lot of these are taken with my or Jer's point 'n shoot.  Why yes, I did bring my real camera that day, and yes, I took a few hundred photos that day, since you asked.   For the first time in our history as photographers, my memory card went corrupt that night when I was trying to unload them to my passport drive.  I was crushed, but at the same time so thankful that it happened on the first day that Jer was there and taking a lot of the same photos as myself.    It never happened again, thankfully.  After I got home, I was able to recover about 20% of them, so not all was lost in the end. 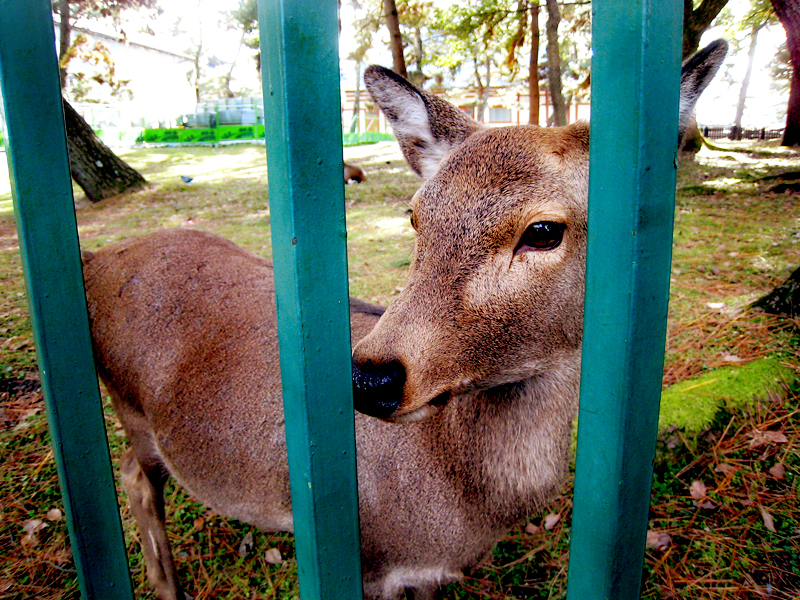 It wasn't long before the first deer started showing themselves, hoping that you were kind enough to spend the 150 yen on a stack of toasted crackers on their behalf. 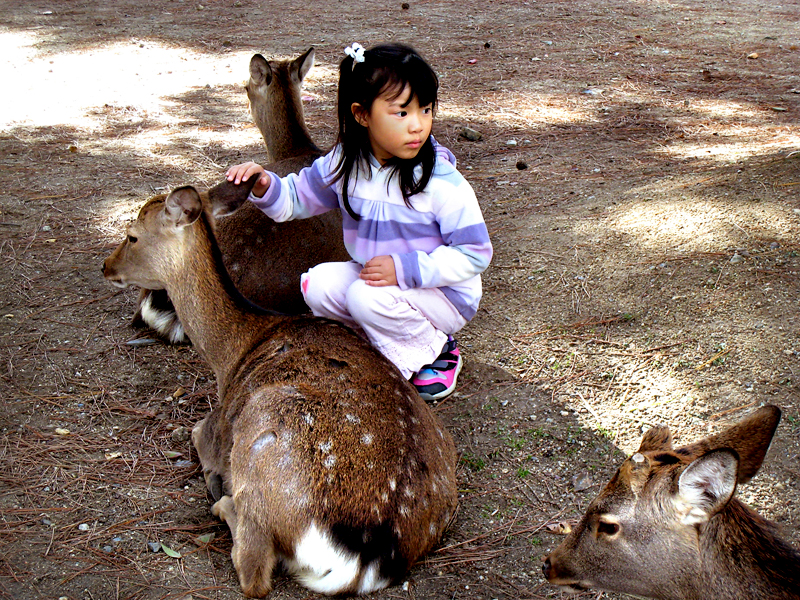 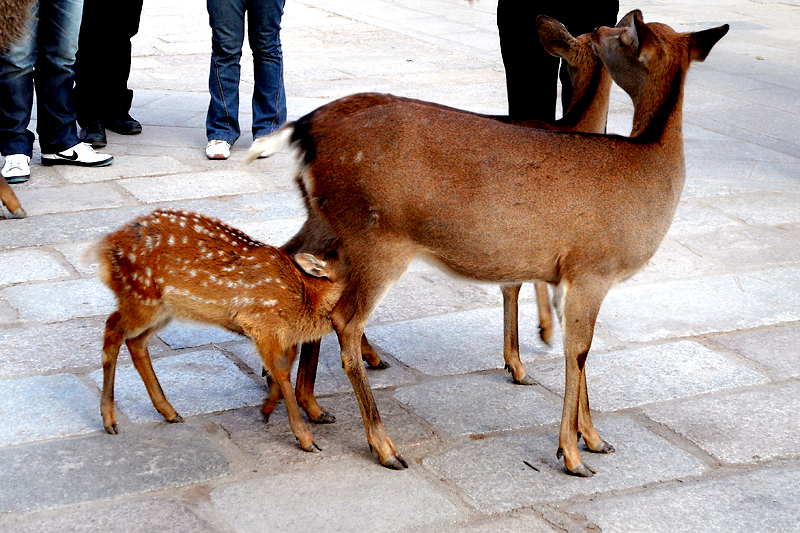 Public breastfeeding, and not a single person was offended. 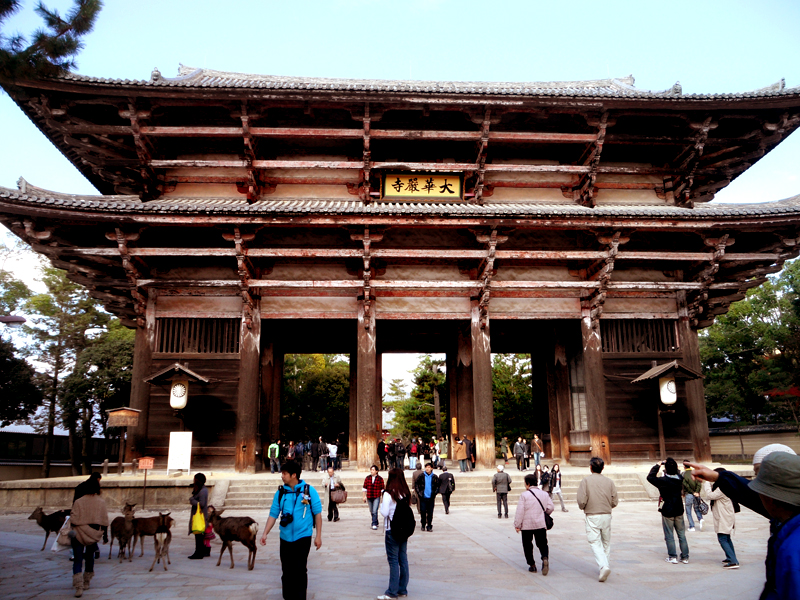 First stop was at naturally the biggest draw for Nara, the Todai-ji (lit. "Eastern Great Temple") temple.  The main hall consists of the largest wooden building in the world, housing the largest Buddha in Japan.   Sounds like something worth seeing, indeed.  This gate, or nandaimon, was no slouch itself.  Back in the day, these gates were actually attached to perimeters around the entire complex, and also could have had multiple layers.  No wonder calling something a "temple" is a compliment to how sturdily it's built. 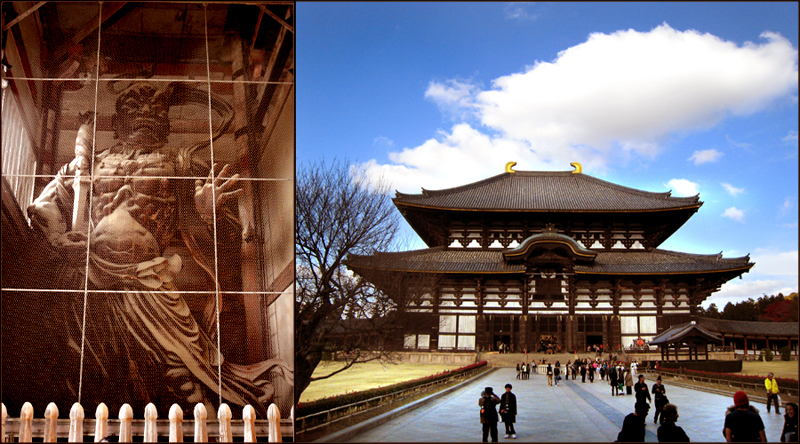 As I saw multiple times and have commented upon - super holy places equals super big and scary guardians.  On the right is when the main hall of Todai-ji comes into view.    Look, even if I published a full-res version of that photo, it wouldn't even begin to depict the size of that structure.   It's huge, and it's all one giant open room when you get inside of it.  Big Buddha needs room to stretch his arms in there. 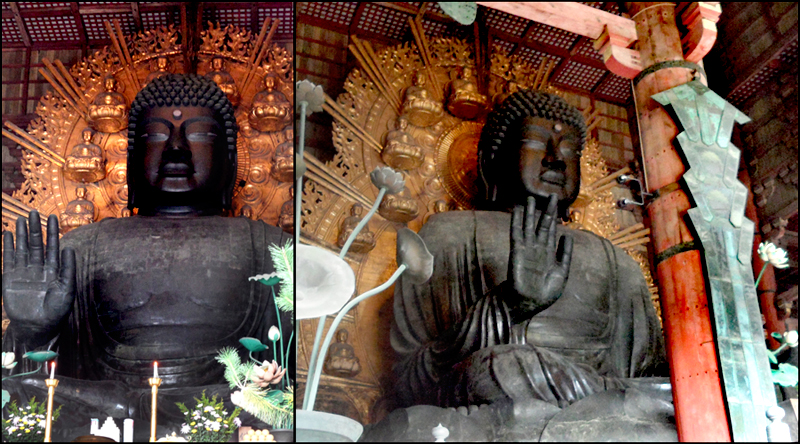 Same deal as what I mentioned before... wow, was that thing huge.  The statue itself is 50' tall, and each of those small statues behind it is probably bigger than a person.  See this for a scale comparison.  Something very interesting to me is that the hands of each Buddha statue each mean something significant.  You wouldn't think so, but the hand appearing to say "stop" is actually a welcoming gesture.

Afterwards, we headed down some of the numerous paths in the park towards the other end, sticking our heads into a few nooks while looking for the other main attraction, the Kasuga Grand shrine. 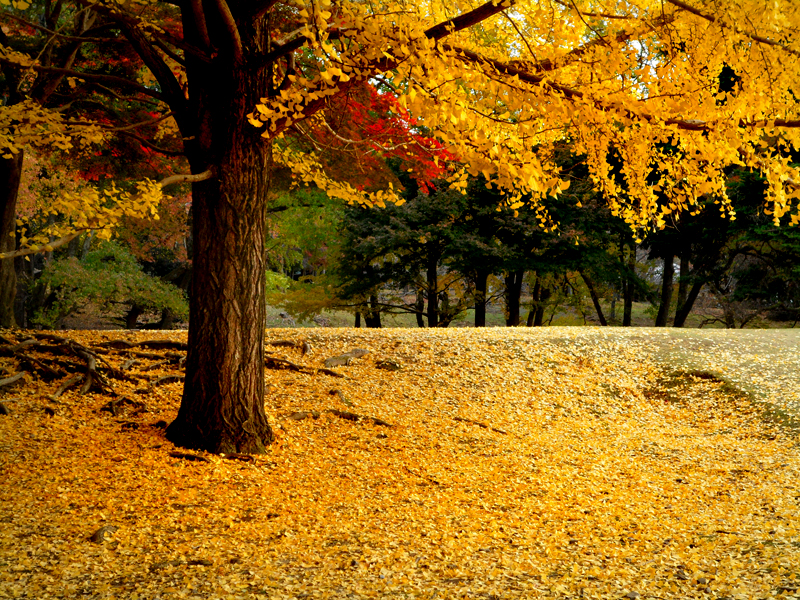 After the momiji Japanese maple trees, ginkgo trees were a very close second as far as my favorite fall colors.  The maples had the deep reds and oranges and perfect leaf shapes, but there was nothing quite like a solid wall of yellow leaves  covering the ground while plenty were still in the trees. 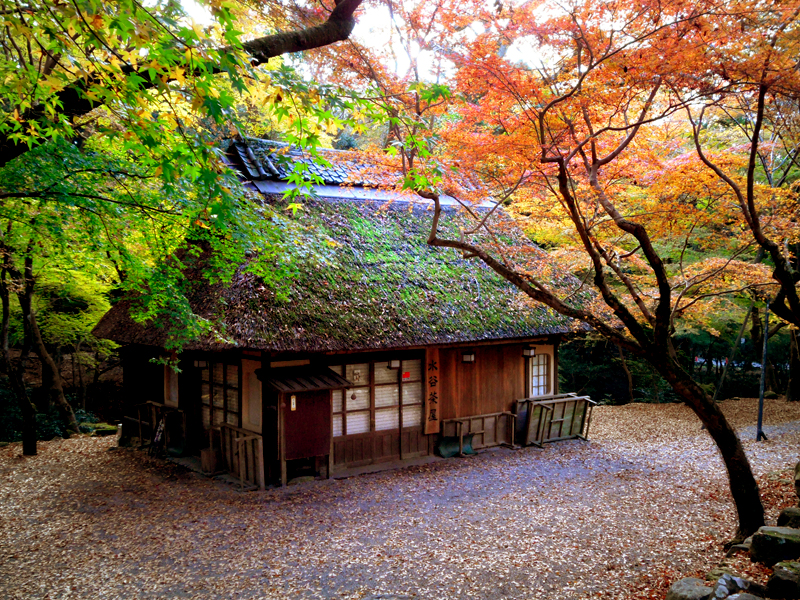 Reproduction of a typical thatched-roof house. 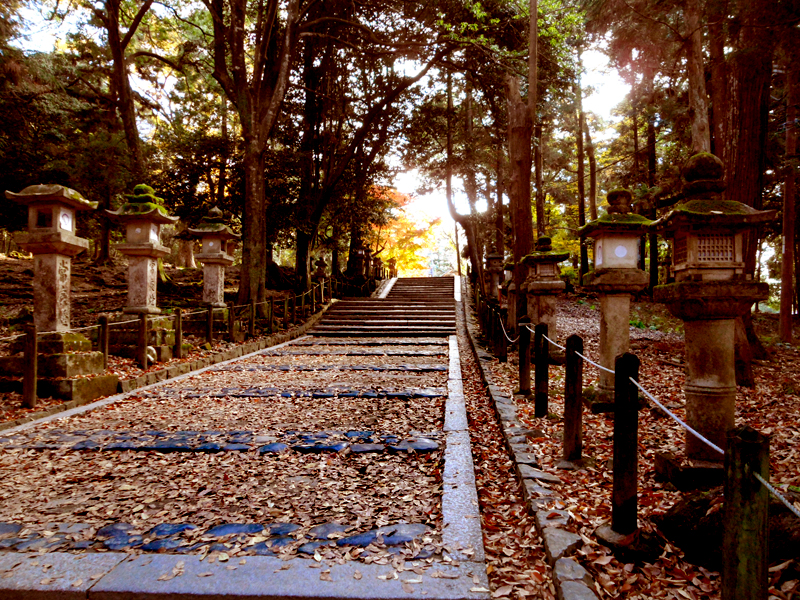 Something I was really looking forward to seeing, and was definitely not disappointed to see - stone lanterns.  No two were exactly alike, yet in groups they somehow where the image of uniformity. 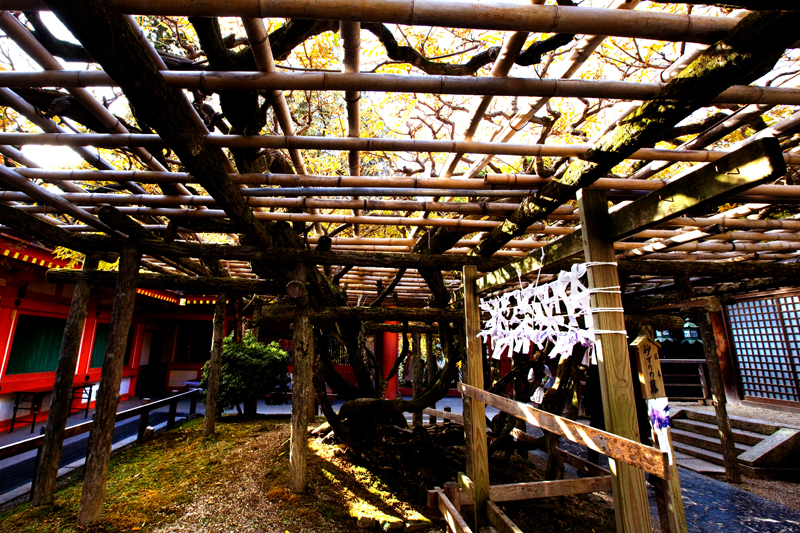 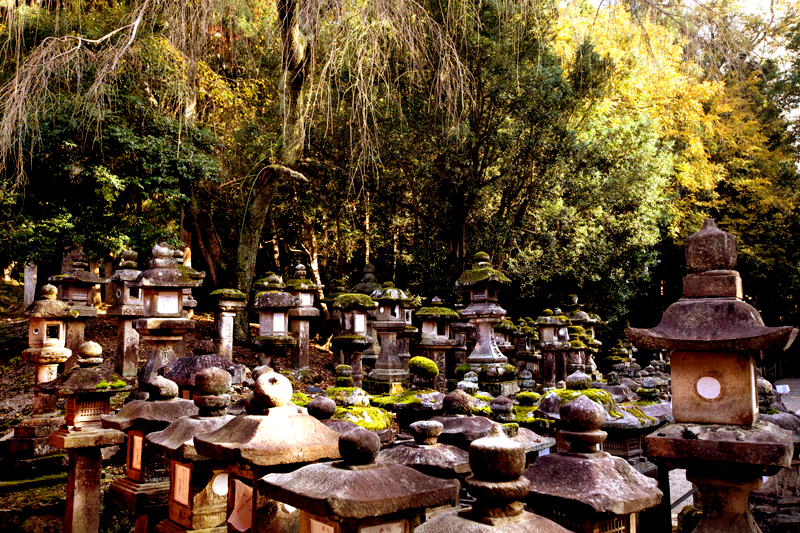 A literal sea of lanterns.  Each one was uniquely donated to the shrine over a long period of time. 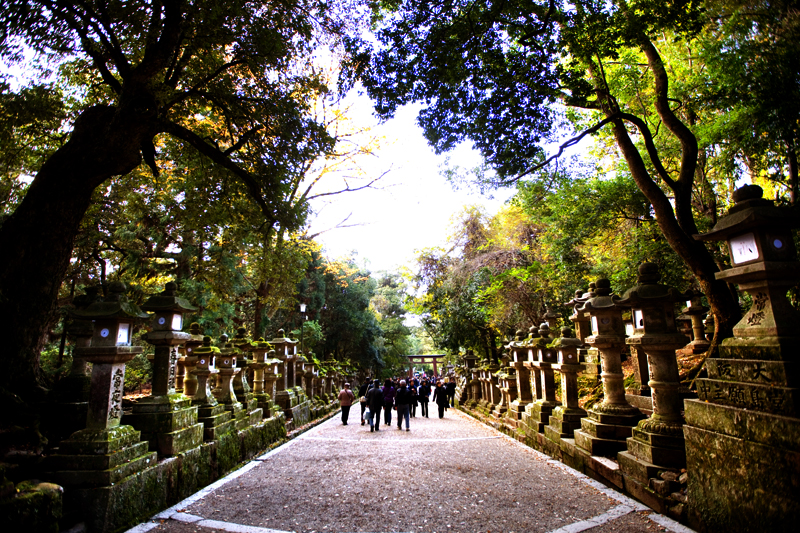 The sea of lanterns went clear past the torii that you can see at the end of this walkway.  There was the occasional pleasant surprise of a deer or two hanging out between the lanterns, content to sit and people-watch. 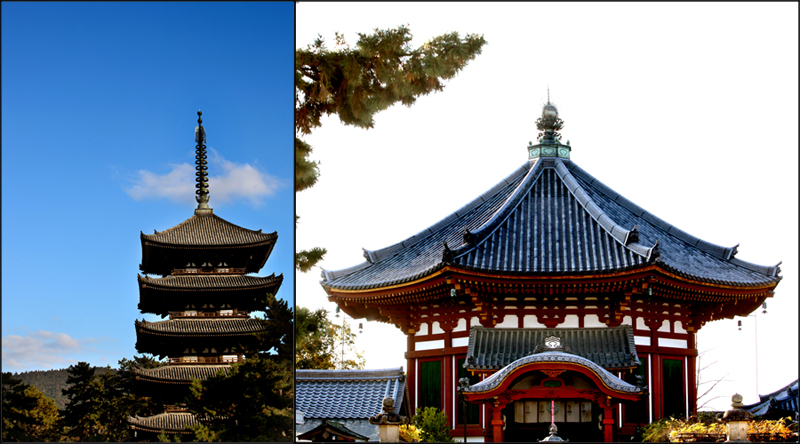 On the way back to the station towards the end of the day, we stopped by the third of the three largest areas in Nara park, the Kofuku-ji temple.  The grand hall was still under renovations that still have not been completed today, but it was very quiet and still worth the stop.   As a bonus, I got to see a massive 5-storied pagoda. 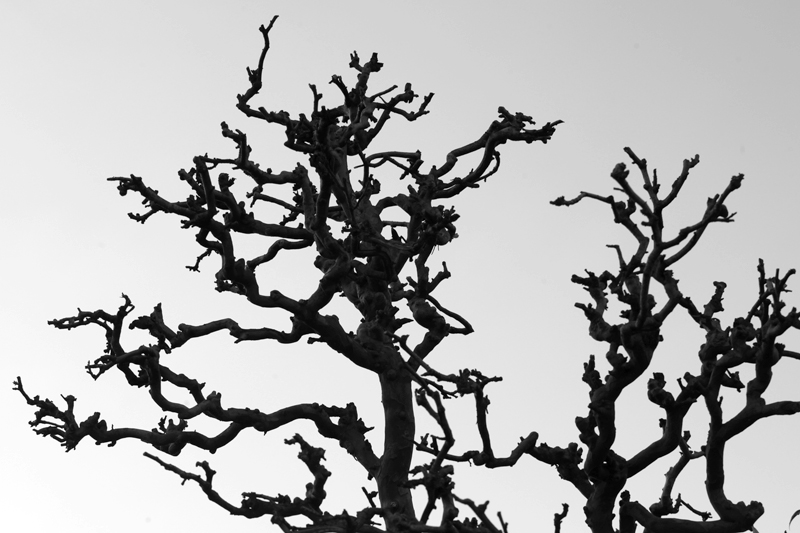 And this gnarly (har!) tree.

Literally across the street from Kofuku-ji, we were instantly transported back to typical urban Japan.  The reputation for the sudden start and stop of historic and preserved places within the urban jungles is indeed no exaggeration. 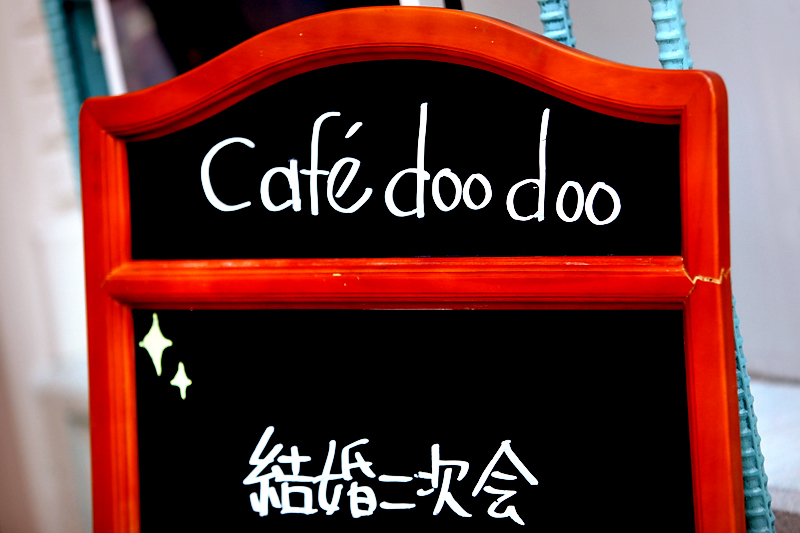 Wouldn't be a complete post without at least one photo of a sign to make you cock your head, Corgi-style. 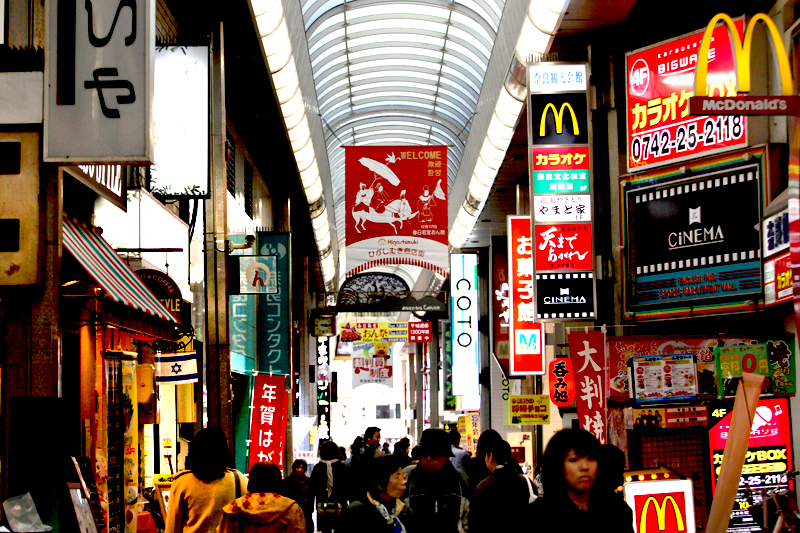 Yup.  Next door to a place hundreds of years old.