OK, now it's time for something a little different.  Day number three takes us back from the smaller towns on the outskirts of Tokyo, to right smack in the middle of the largest metropolis in the world.  This series is Akihabara, known as the "Electric Town" section of Tokyo.  Just a couple of stops from the main Tokyo station, it is known worldwide as the technology center of Tokyo. 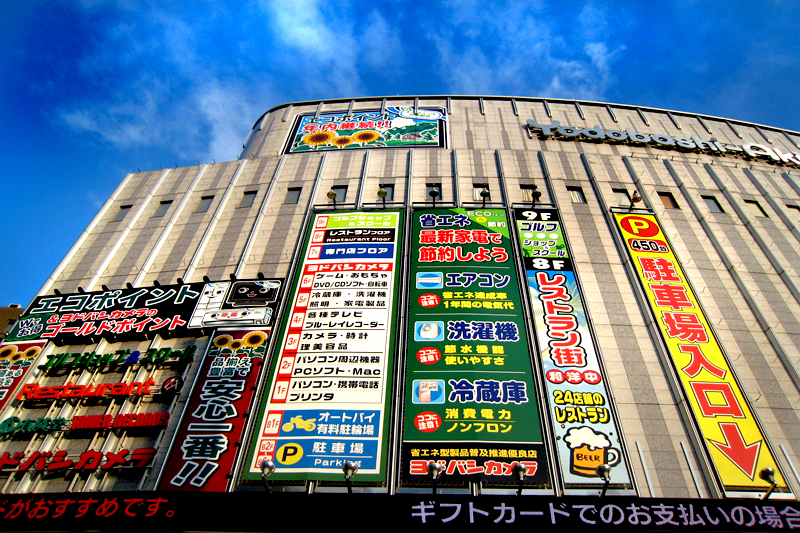 Right outside of the Akihabara station was my first stop - Yodobashi Camera.  Yes, it is 9 stories tall.  No, only one floor is actually cameras, and that floor alone dwarfs B&H Photo/Video of NYC.  Yes, beer can apparently be procured somewhere inside.  That place blew my mind.  If you took a B&H, Sears, Best Buy, Toys R Us, and Apple Store, and stacked them all on top of each other, it wouldn't amount to this one place. 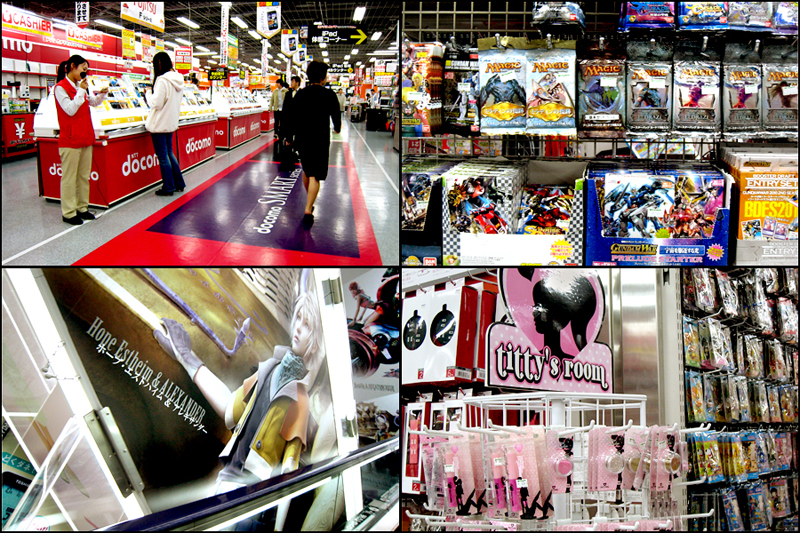 (top left) docomo is pretty much their Verizon.  As soon as you walked into the store you heard that saleswoman on the microphone, blasting out what I can only assume were the specials du jour.  (top right) MAGIC cards in Japan!  I almost bought a pack just to try and read, but then I would have been obligated to play until the wee hours of the night when I visited Jason later on in the trip, like we did back in the day before we became old men.  (bottom left)  All the escalators had full murals of Final Fantasy characters.  Rock.  On.  (bottom right)  I'm... not sure what to say about that one.

Seeing is believing - enjoy this clip of me meandering through a few aisles while Japanized versions of American music blares in the background. 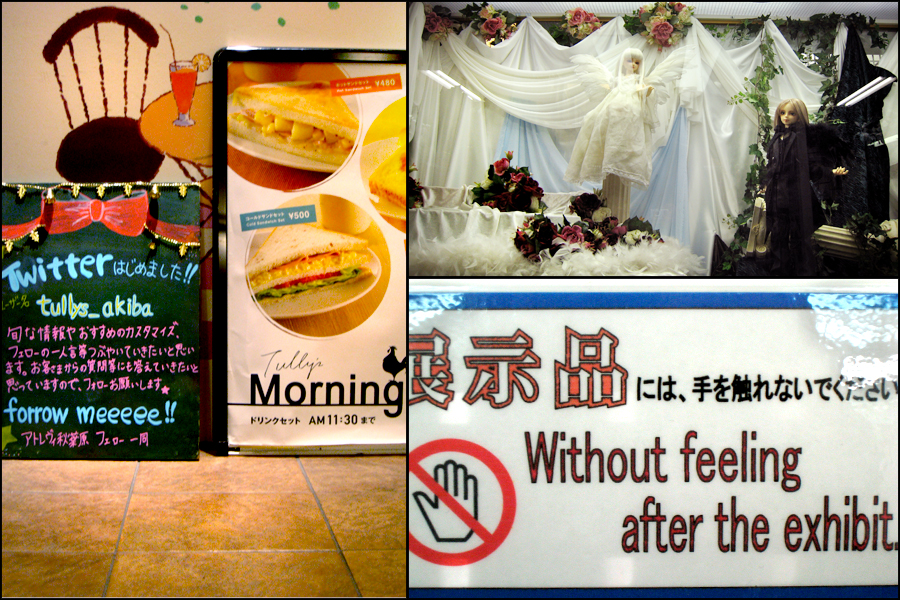 (left)  I love when a coffee break results in another gem of an Engrish picture.  (top right)  this photo comes from the next stop, the old radio market, which I'll get to next.   Tucked away in an upper floor was a doll shop, which was kind of a creepy place.  Apparently while our "nerds" are painting DnD figurines and building model trains, theirs are building intricate fantasy dolls with completely positionable joints.  Can't sleep... dolls will eat me...  (bottom right)  This is quite possibly the biggest epic fail of an English translation of my entire trip. 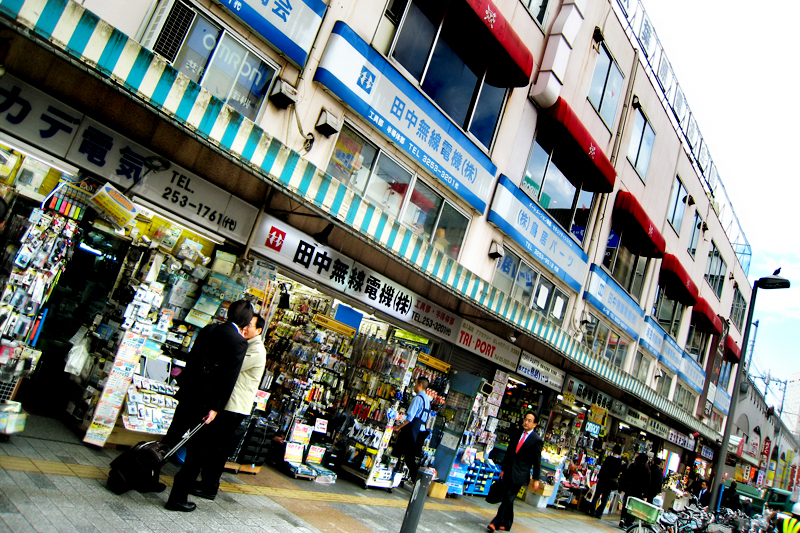 Possibly the most historic building of Akihabara - the radio market.  This area sprung up after WWII when many radio and electronic technicians of the Japanese army came home and started up the only business they could make money at - radios and... electronics.  It was a big key in the regrowth of Tokyo after the war.  Obviously the demand for such products have gone down, but the building preserves the small electronic stand atmosphere quite well. 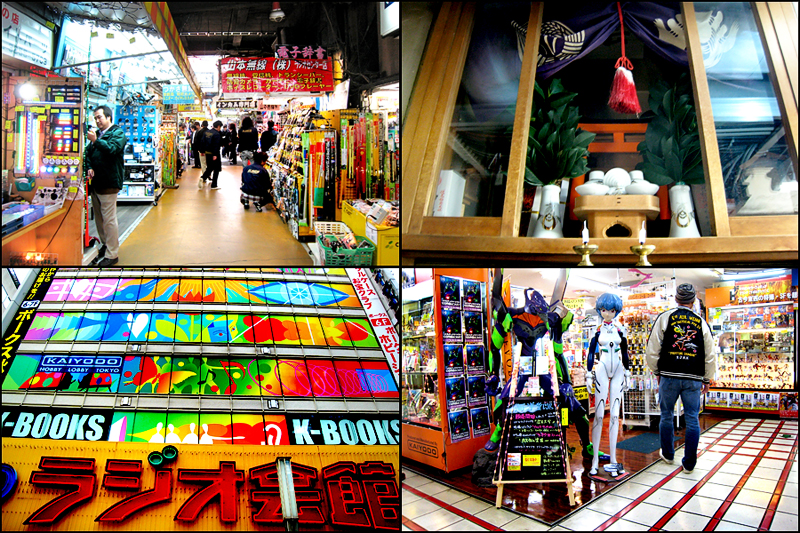 (top left)  one of many covered walkways loaded with tiny electronic shops (top right) A mini shrine right in the middle of the building, which was quite the paradox.  I don't typically think of electronics as items needing a "blessing".  Maybe that would help with all the times I end up cursing out said electronics... (bottom left)  B&N and Borders, are you paying attention??!  This is how you get noticed and attract shoppers!  (bottom right)  Forget lifesize cutouts of Anna Kournikova when you can have lifesize models of badass blue-haired superheroines. 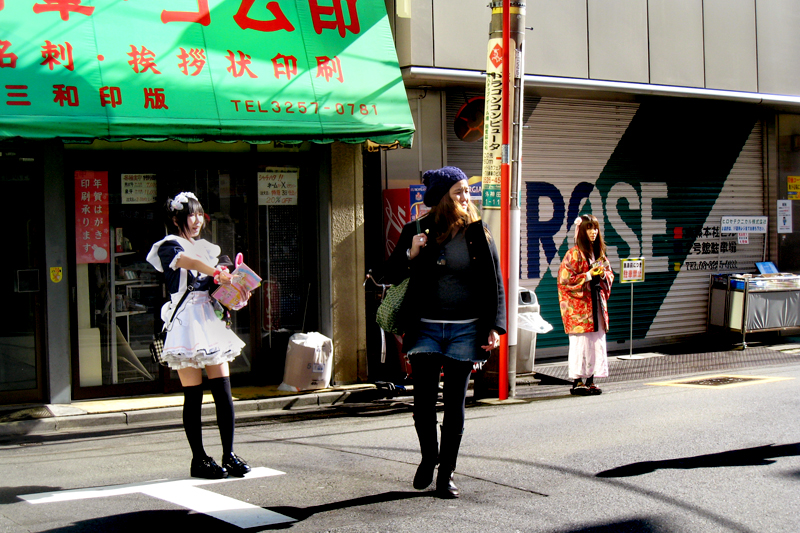 Ah, yes... the infamous "maids" of Akihabara.  Maid cafes are an interesting subculture of Tokyo, particularly in Akihabara.  It all somehow stems from anime, which I gladly admit that I know approximately zero about (ok, so I watched Death Note... so slightly more than zero).  In short, these street hawkers are trying to get people to come inside and pay an obscene amount of money to have an underage girl in a maid outfit spoon-feed you and take their photo with you.  As a bit of a reassurance, any kind of physical contact will apparently result in you thrown into a pit of ill-tempered yakuza, so I'd rank this just a a step higher than say, a topless bar, on the ladder of morality.  /soapbox 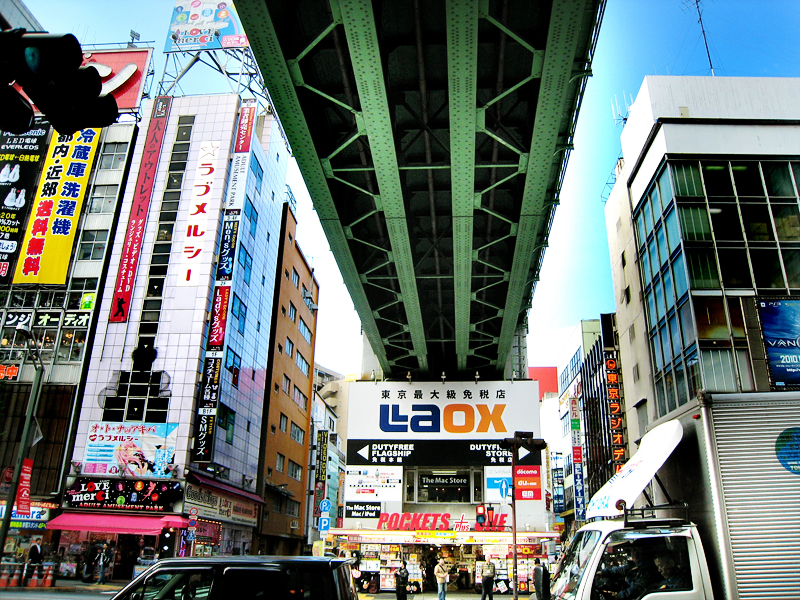 I wandered this store for 30 minutes and walked out slightly annoyed at the inauthenticity of the products.  Most of it was stuff you can buy at any store at home, for much less.  Duty-free be darned.  But I did get a super-authentic samurai t-shirt and a limited edition (only 5,000,000 ever made!) refrigerator magnet.  Lesson learned there. 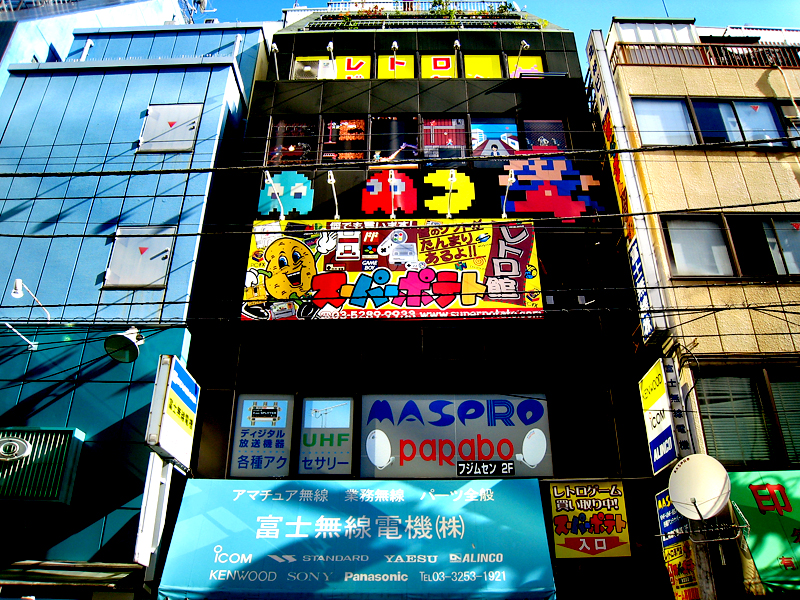 Warning - incoming geek overload!  I am so glad that I paid the $6 for the Akihabara audio tour, because otherwise I would never have heard of this place.  The name - Super Potato.  Or in the words of some, a mecca for any child of the 80's.  I couldn't help but begin bebopping the Mario theme as I approached the elevator feeling like I had just come contact with a bouncy star. 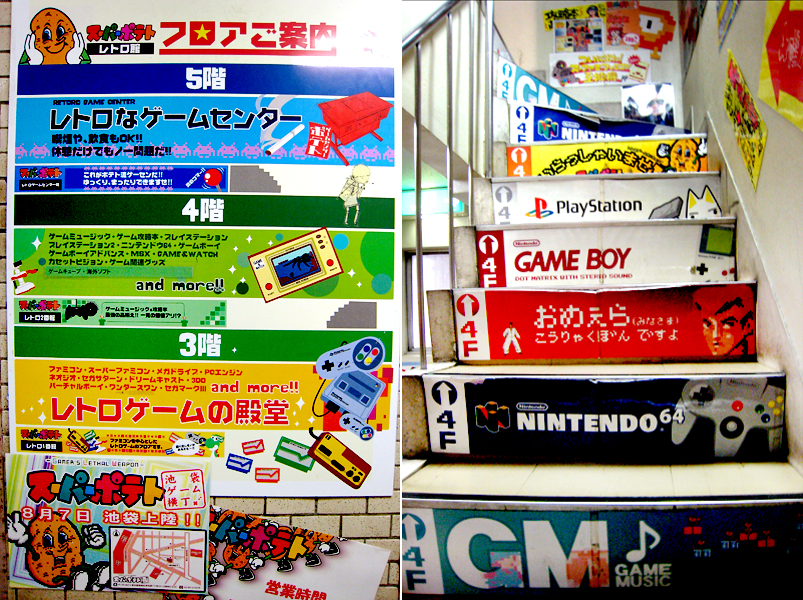 Inside - ARGH stop teasing me!  I want to see the goods! 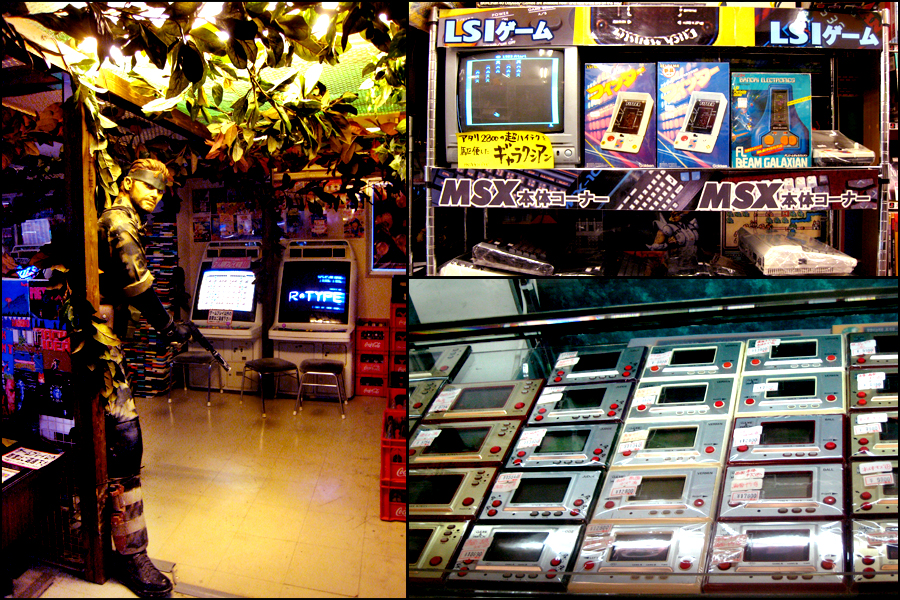 (left)  I'm looking for Solid Snake.  And a clean pair of shorts.   (right)  Entire case of original Game & Watch games, selling for around $200 each.  The rest of the store (all 3 floors of it) definitely did not disappoint.  They had wall-to-wall cases full of original games and systems from the 80s and even the 90s, many of them in their original packaging.  For way less than what you'd pay on E-Bay, too!  I had to pick me up a few of the Japanese versions of the Final Fantasy series for my Wall of Game at home. 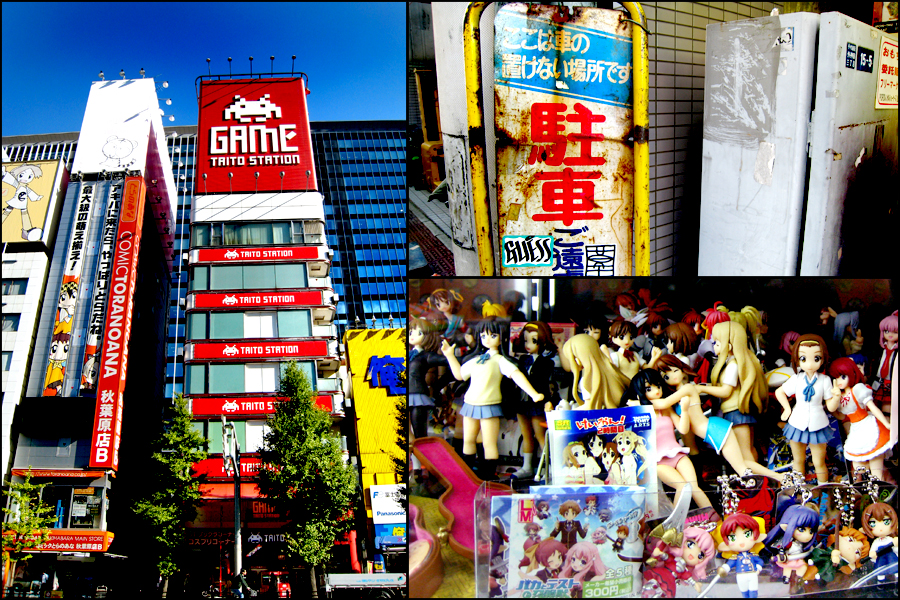 (left) If you've seen Lost in Translation or any movie that shows any kind of arcade scene in Japan, it probably happened in one of these Taito Stations.  I pretty much tracked down all the games I could remember from LiT, but felt a little gypped because they weren't accompanied by the awesome grungy characters that were manning them in the movies.  There goes that fantasy!  (top right) Just a cool grungy sign I found in an alley.  (bottom right)  Anime girls in nonexistent skirts and arranged in a way that simply cannot be an accident.  Perverts. 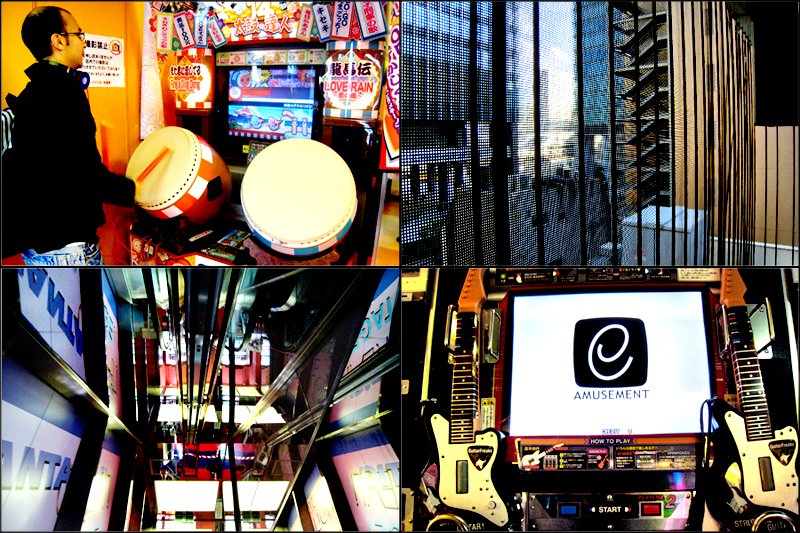 (top left) Continuing my thought from above - I watched this guy play, and he played those drums about as well as I play the field.  I came to Japan to be wowed by their video game prowess.  Sheesh.  After he played, I spent surprisingly the only money I spent in an arcade the entire trip and gave it a whirl.  All that Donkey Konga practice paid off and I was rewarded with a free game.  Eat that.  (top right, bottom left) Just some cool architecture in the stairwells and elevators.  (bottom right)  I was really hoping to see a punk rock Japanese kid playing this thing with a cigarette being held in his mouth by a mere millimeter, but I had to settle for the "this proves I was there" photo.

Note - I took several video clips in here and in some other places I saw in Shinjuku and Shibuya, so stay tuned for a more comprehensive post later on. 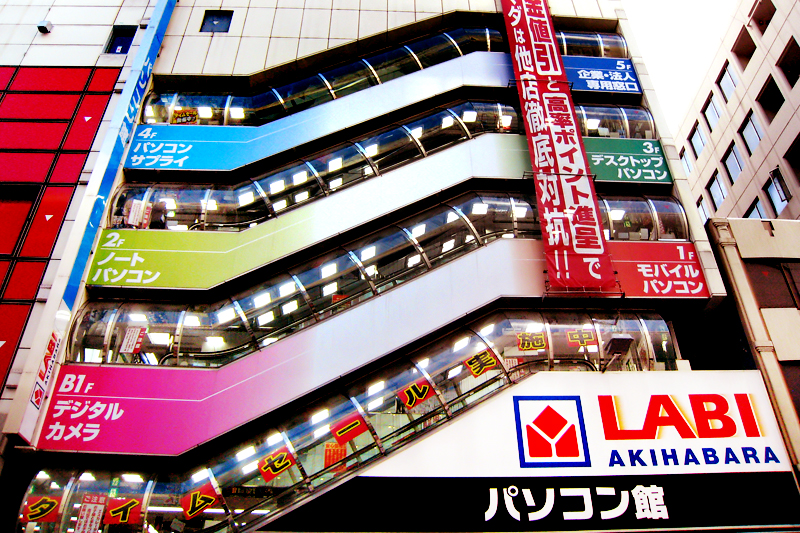 Escalators or a playpen for that hamster from The Nutty Professor.  You decide. 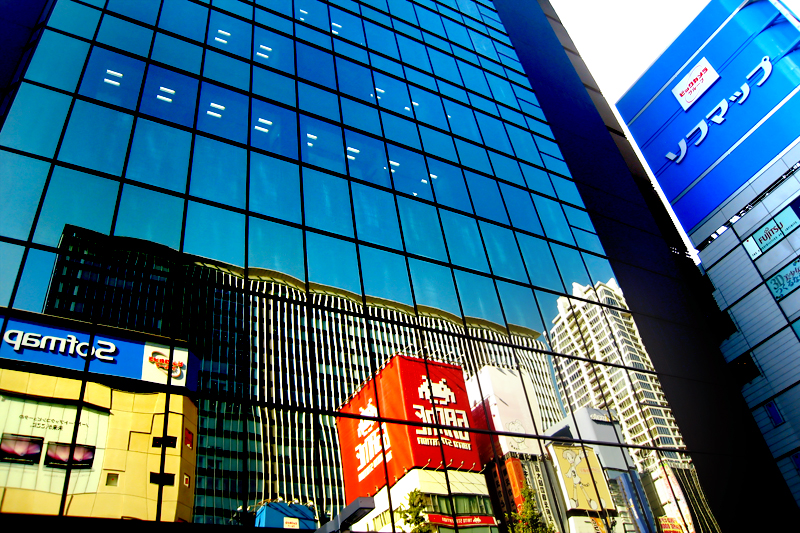 As a photographer, I am powerless to the pull of reflective surfaces.  I was like a pinball while walking down the main street, as a result.

Akihabara definitely did not disappoint, and a large part of that was due to that great audio tour.  Even then, all you have to do is walk down the main street in this area and duck into every store you see, and there'll be something for the inner nerd in everyone.  Day 3, success!