Bad news - this post will be sorta short.  Good news - less opportunity for me to ramble.  Also, every one of these was taken at night and with my point-and-shoot camera, so the quality will be a bit lacking again.

Without furtho ado - Jer was a bit jet-lagged and we stayed at the apartment for a little while catching up with Masa, so we decided to take a short trip to Yokohama that night.  Yokohama is an hour away by train, yet was still basically a part of Tokyo, to further put into perspective the size of the metropolitan area. 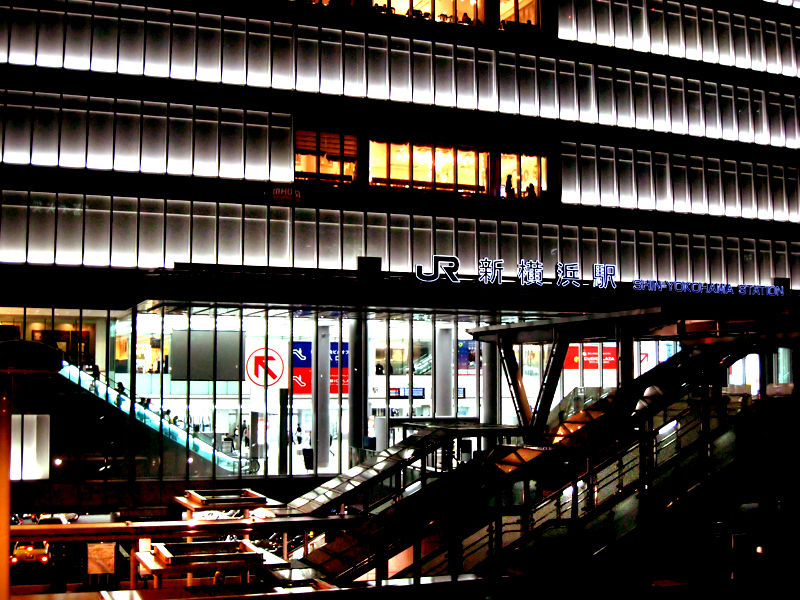 The main station of Yokohama - one of the most modern-looking ones I had seen on the trip. 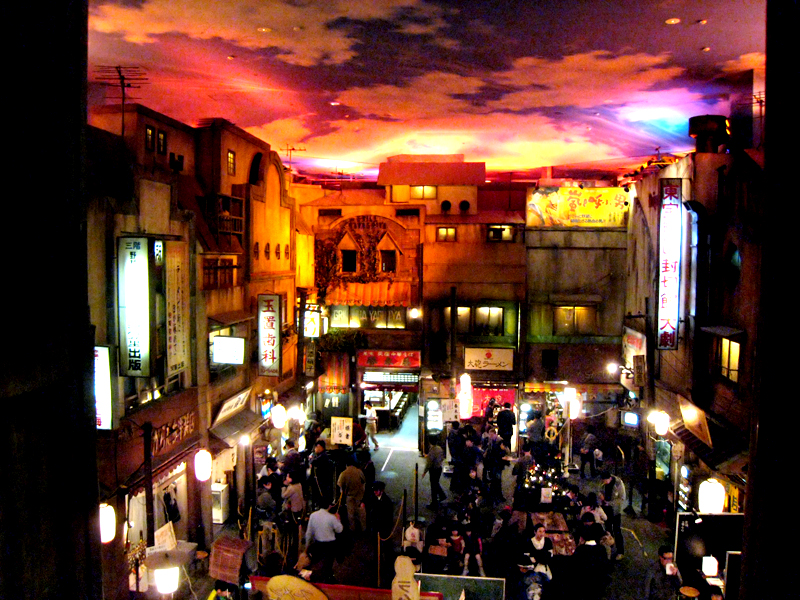 First stop in Yokohama - an honest-to-goodness museum centered around ramen noodles.  Considering how much of the stuff Jer ate while in college, I knew he'd get a kick out of that kind of place.  For some reason, they themed the whole place like a section of WWII-era Tokyo, back when the noodles became popular.  Inside were 7 or 8 mini restaurants where you could either buy a whole bowl of noodles, or buy a sample-size so you could try more than one style.  Kind of touristy, but it was something different. 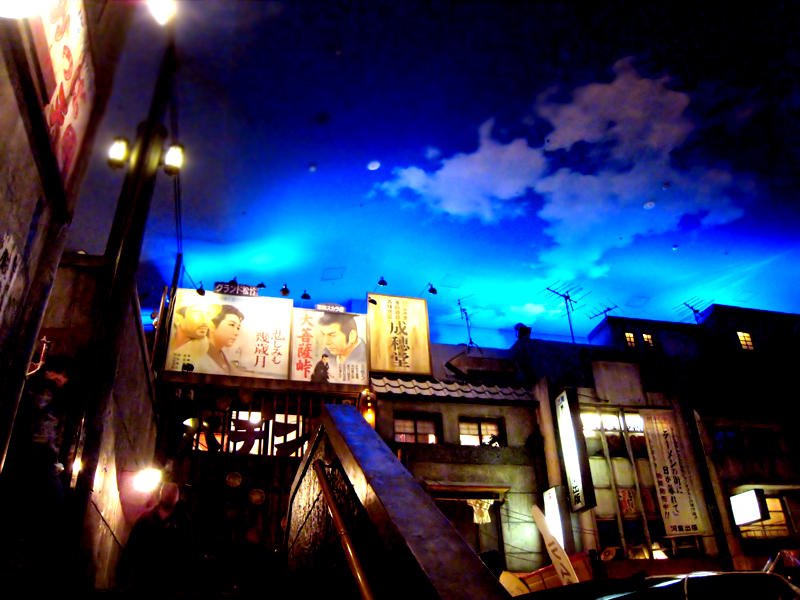 Another view in the museum, showing the painted-on night sky. 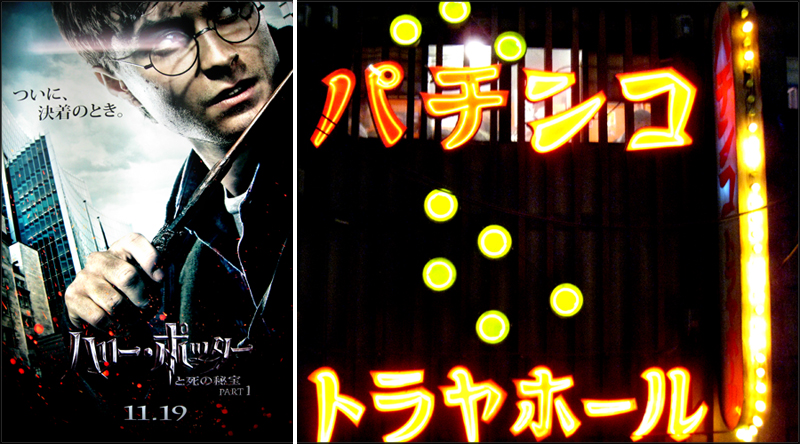 Top right - some neon signs inside the museum.
Top left - one thing I was really looking forward to during my vacation was getting a chance to practice reading katakana characters, which the Japanese use to phonetically spell out words borrowed from other languages - English, primarily.  So, I enjoyed being on the lookout for things I'd recognize, such as "Harii Pottaa".  Yes, I know the picture was kind of a dead giveaway, but that didn't stop me from sharing this particular shot with you, did it? 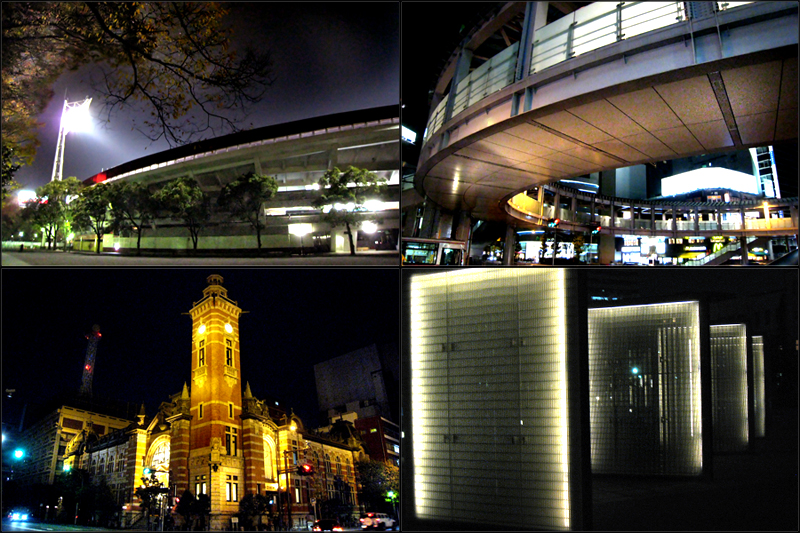 After the museum, we walked a couple of miles to the waterfront park, passing by 1) the Yokohama pro baseball stadium, 2) cool pedestrian overpasses, 3) a VERY Western-influenced church, and 4) ... repeating rectangles of light. 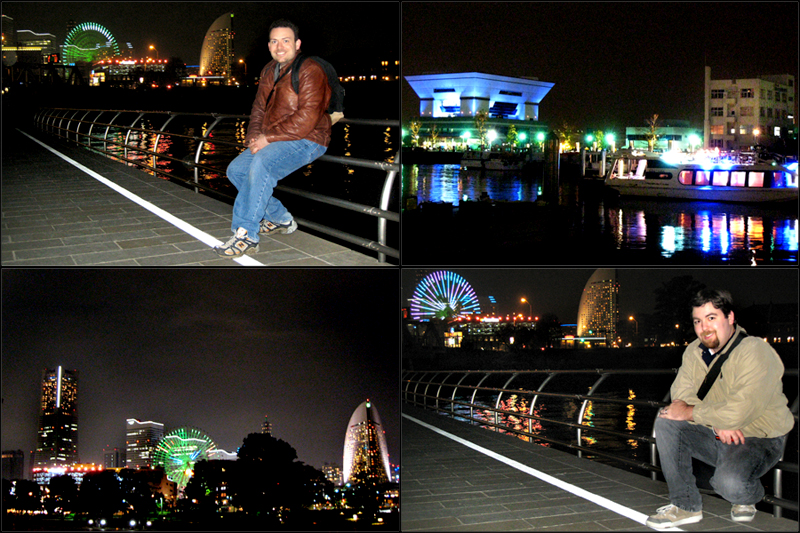 The classic Yokohama skyline, plus a couple of shots of us, plus some psychedelic lights reflecting in the water. 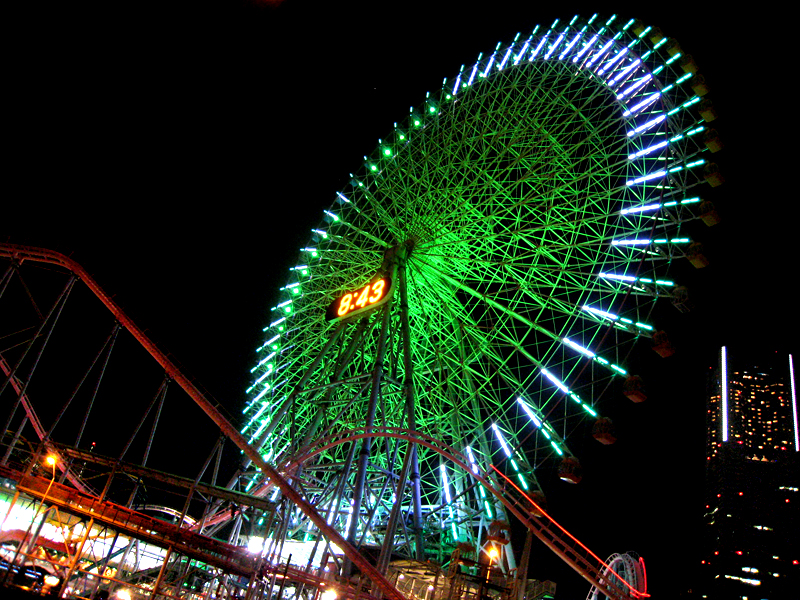 The famous Yokohama ferris wheel, or "kanransha" in Japanese.  I only remember that word because Asuka must have repeated herself 6 or 7 times before I could pick out all of the syllables that make up "kanransha".  By the way, "kanransha" is technically 5 syllables to the Japanese, instead of 3.  I won't even try to explain that one. 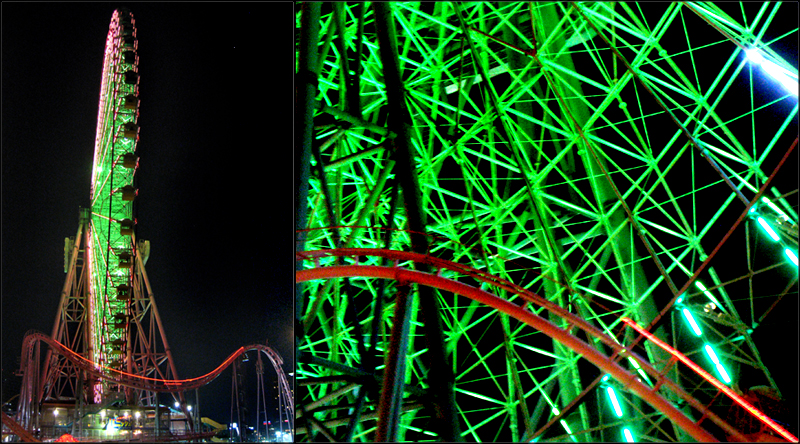 After that, we walked a couple more miles past some tall luxury condominium skyscrapers and the Yokohama convention center before arriving back at the station that would take us back home.  We needed a good night's sleep, because the real adventures were about to begin!  Next up - our trek across Japan towards Kobe, with the first stop at the castle town of Matsumoto.