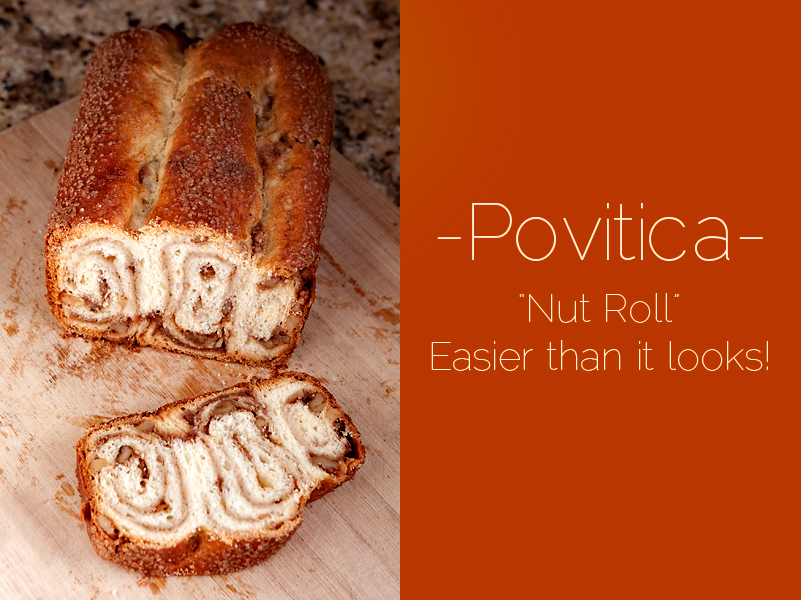 I was so excited to try this recipe.  I'm in the middle of a love affair with homemade yeast breads, and when I came across this recipe for povitica - a sweet bread made by rolling out yeast-leavened dough very thin, filling it with something nutty and sweet, and rolling it up - I knew I had to try it.   The surprise comes at the end when you slice into this beauty and unveil the beautiful swirl pattern on the inside.

As a bonus?  It is an absolutely delicious bread.  Here's how to do it:

(psst.. printable recipe is at the bottom of this post) 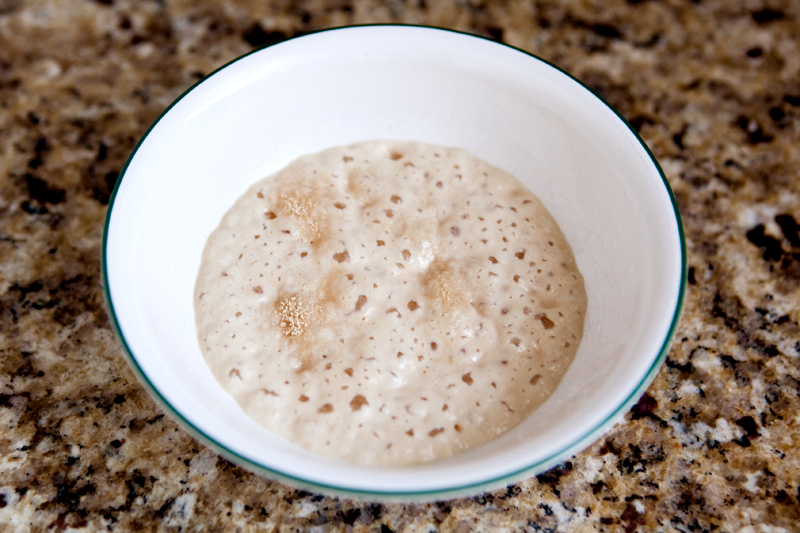 In a small bowl, stir together a little sugar, flour, and warm water.  Sprinkle active dry yeast on top, cover loosely with plastic wrap, and set aside for about 5 minutes until it starts to bubble. 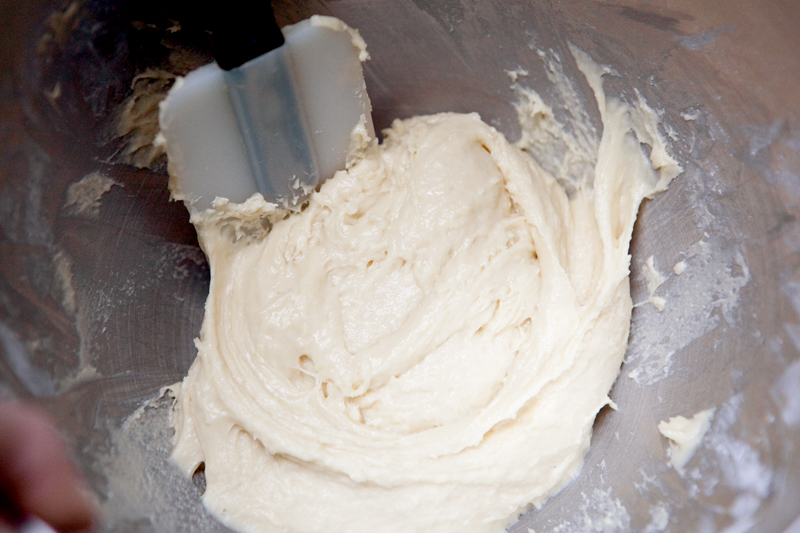 (not pictured) Heat some milk in a sauce pan to just below boiling, stirring constantly, and then allow it to cool for a few minutes.  In your mixer, add the scalded milk to some sugar and salt until combined.  Add an egg, melted butter, a little flour, and the yeast mixture.  Keep adding flour until the dough begins to "clean the bowl", meaning that it will scrape itself off of the sides of the bowl as the mixer turns. 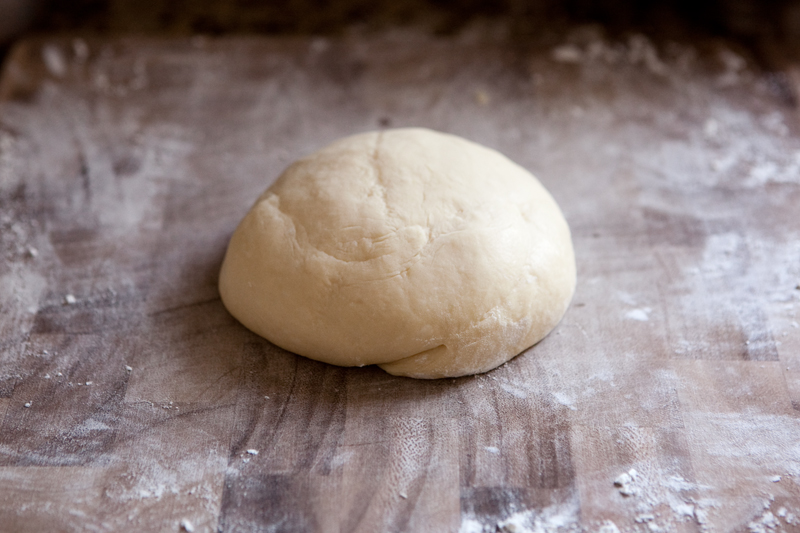 Turn the dough out onto a floured surface and began to knead, while adding small amounts of additional flour until the dough is smooth and not sticky.  This is a lovely dough that comes together quite nicely, so it's easy to tell when you've added enough flour.

Place your dough ball into a mixing bowl sprayed lightly with cooking spray, cover with plastic wrap and a dish towel, and let it rise in a warm place for about 90 minutes, or until it has doubled in size.  I like to sit rising doughs under warm lights in my kitchen.  Seems to do the trick! 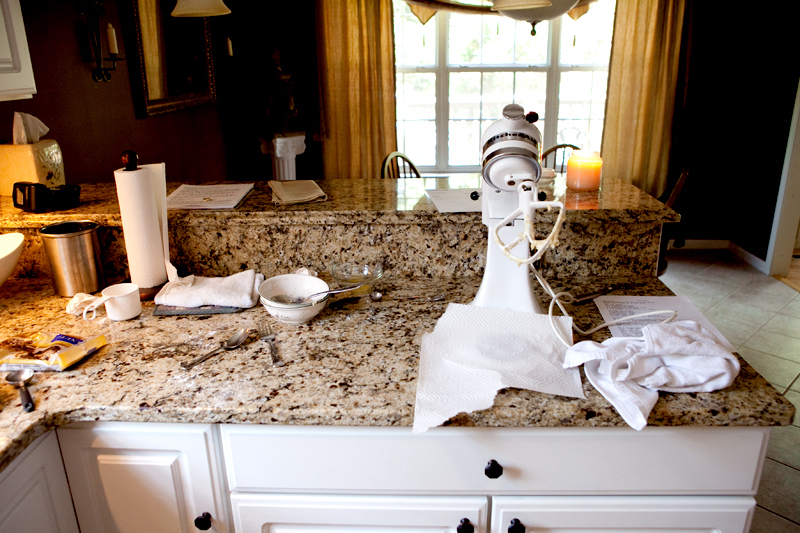 Since you've got some time to kill, maybe you can clean up the mess you've made so far!  Also, this is a good time to throw together your nut filling.  There are several methods to making a filling, so feel free to experiment, but full instructions for what I did are included in the printable recipe at the very end of this post. 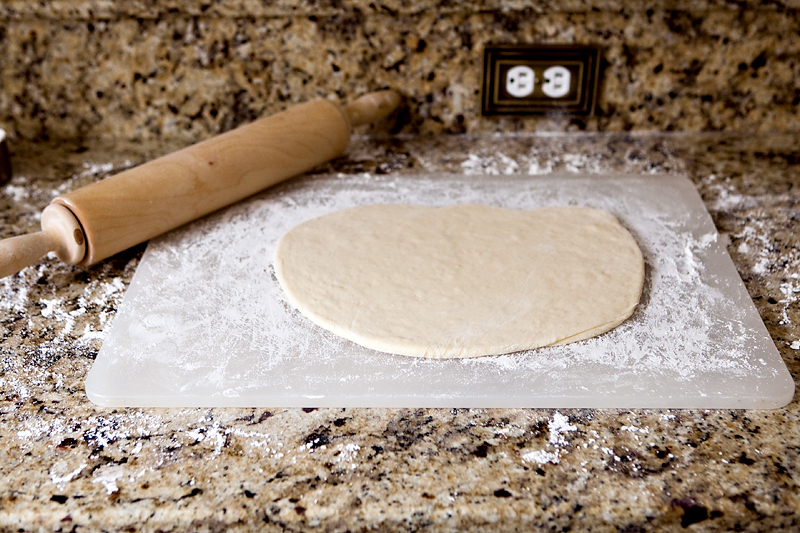 Once the dough has risen, move it to a floured surface and with a floured rolling pin, roll it out until it's about 10x12 inches in size (that's an estimate - it doesn't have to be exact).  Brush with a little melted butter. 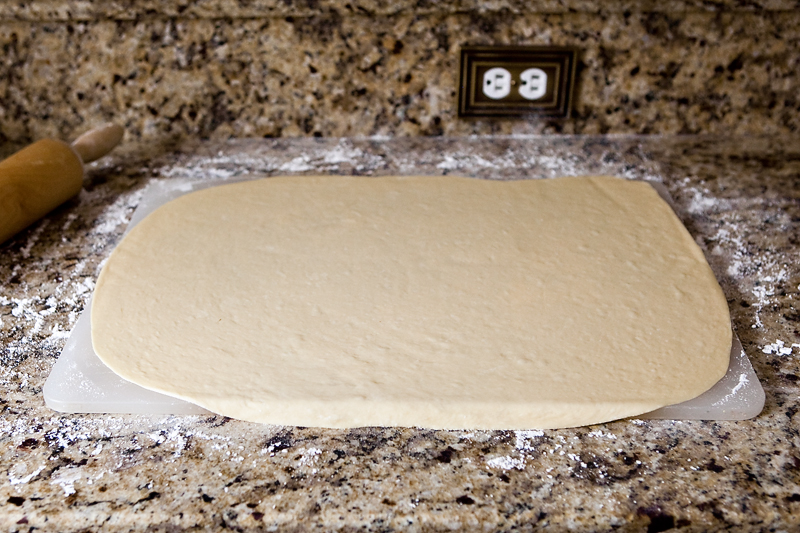 Continue to roll out the dough until it is very, very thin.  Thankfully, this dough is fantastic to work with, so as long as you keep your surface floured (I kept lifting up the dough to sprinkle additional flour as needed) you shouldn't have problems with sticking or tearing. 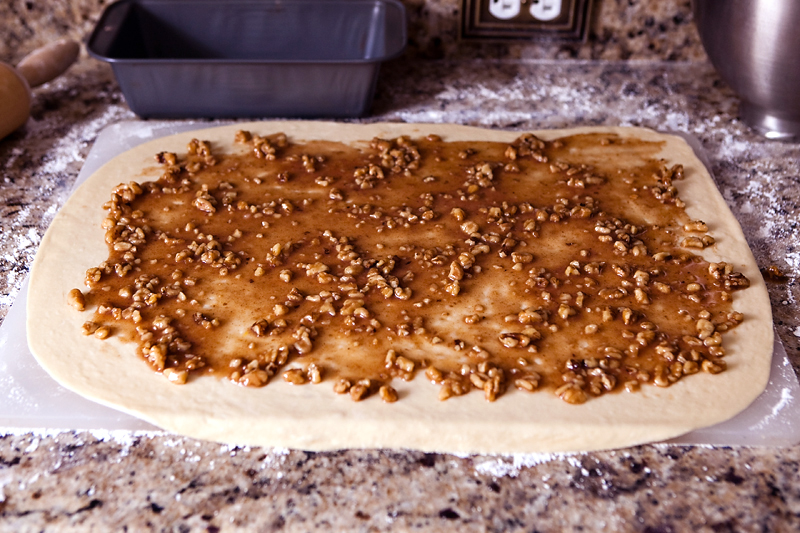 Now you can spread that yummy nut filling on top, leaving a little space at the edges.   From my research, most people grind the nuts completely, but I left mine in chunks.  It made my final pattern a bit less uniform, so you may want to go ahead and grind yours.  Regardless, the finished product was delicious, so do whatever you want! 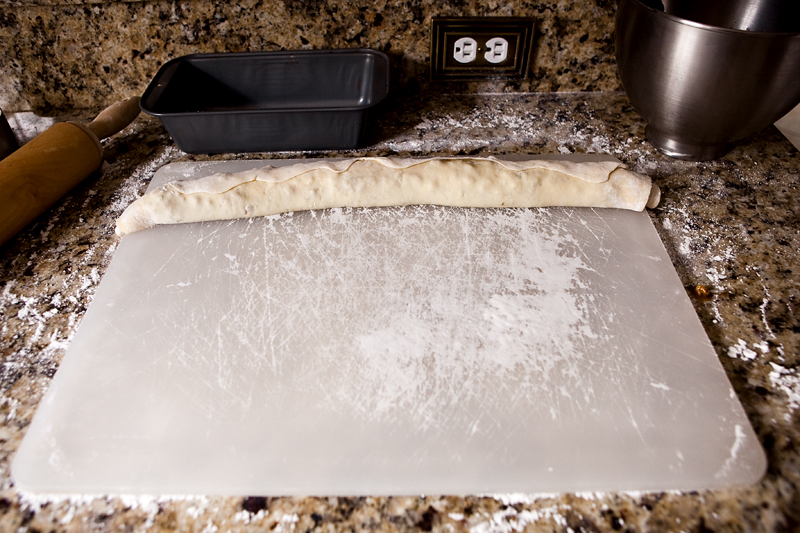 Begin slowly rolling up the dough like a jelly roll until you're left with a big dough log of nutty goodness.   Once it's completely rolled, gently lift and pull the log starting at the center and moving out toward the ends, so that you lengthen the log slightly. 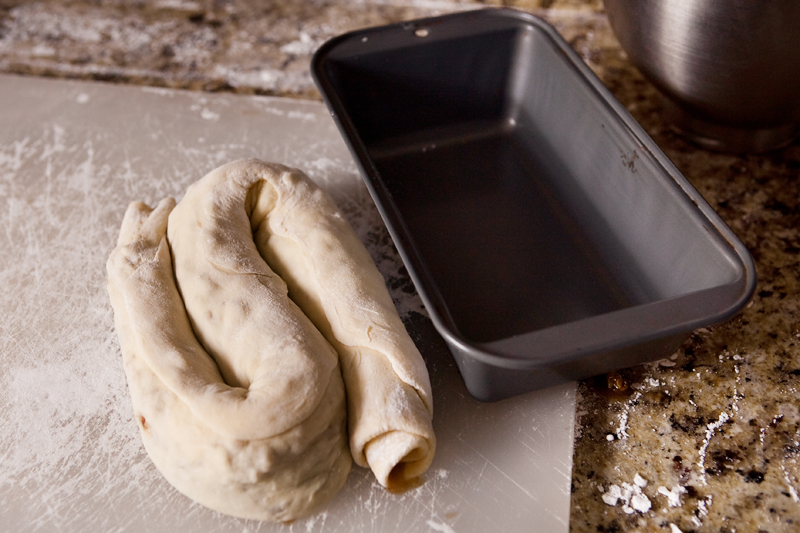 Place a 9x5 loaf pan near the dough as a guide, and shape it to form an S-shape that will fit inside. 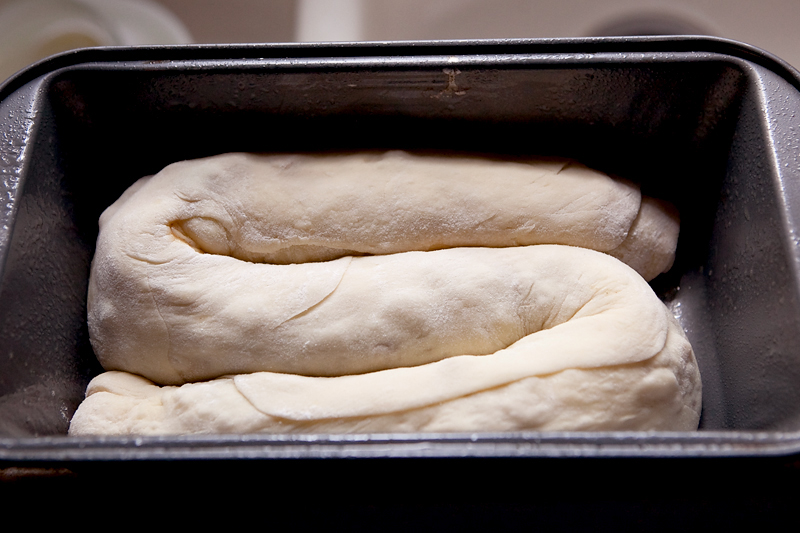 Make sure your loaf pan is well-greased, and gently place the dough inside.  Let it rest for about 30 minutes.  In the meantime, you can pre-heat your oven to 350F. 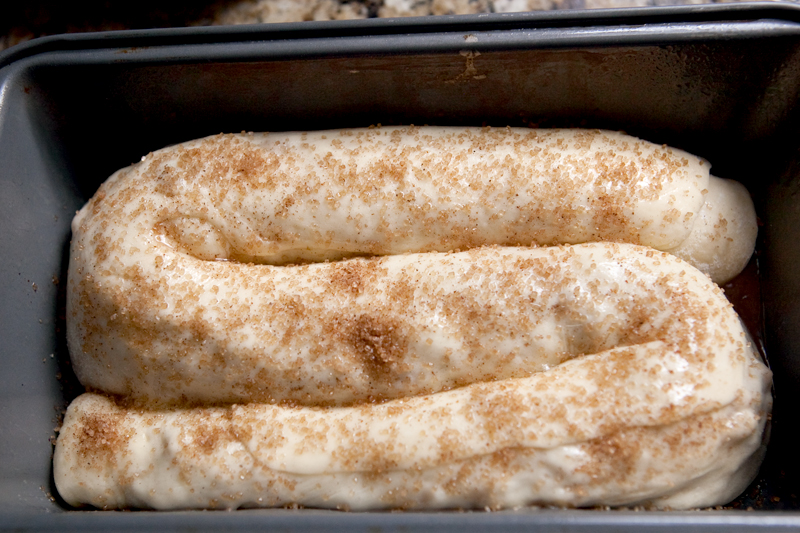 Once the dough has rested (and risen a bit more) you can brush with a beaten egg, and add a topping of your choice.  I mixed together cinnamon, cardamom, and raw demerara sugar for a little sweetness and crunch. 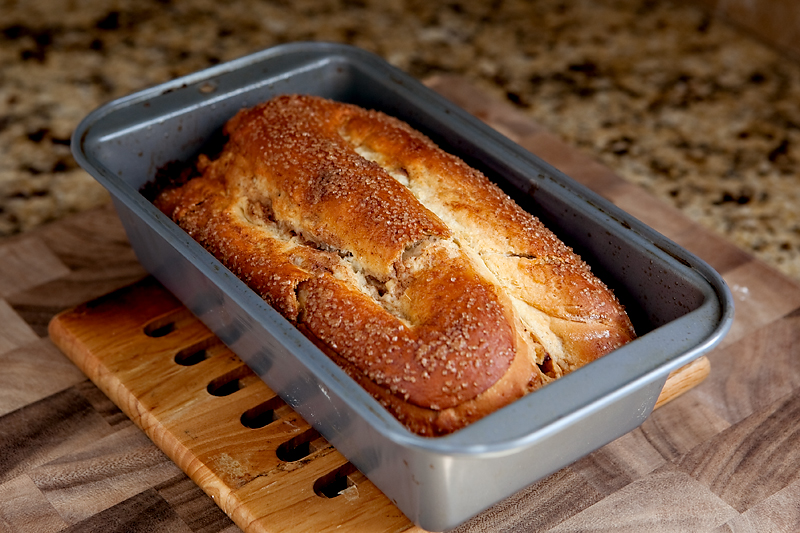 Bake for about 15 minutes, and then turn the oven temperature down to 300F.  Bake for an additional 45 minutes or so.  If the top of your bread begins to brown too quickly, loosely tent the pan with aluminum foil.  Bread is done when it's a deep golden brown, begins pulling away from the sides of the pan slightly, and has a hollow sound when you thunk on it with your knuckle.  Let the bread cool completely in the pan before you try to remove it. I let mine sit for about 45 minutes. 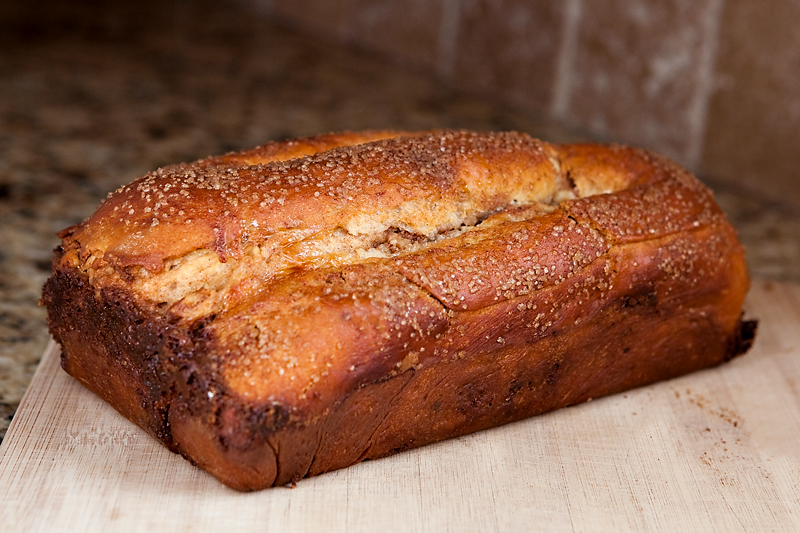 Run a butter knife along the edges of the pan to loosen the edges if needed, then place your hand on the top of the bread and invert the pan.  It should come right out.  Isn't it pretty?  Look at that rich golden color! 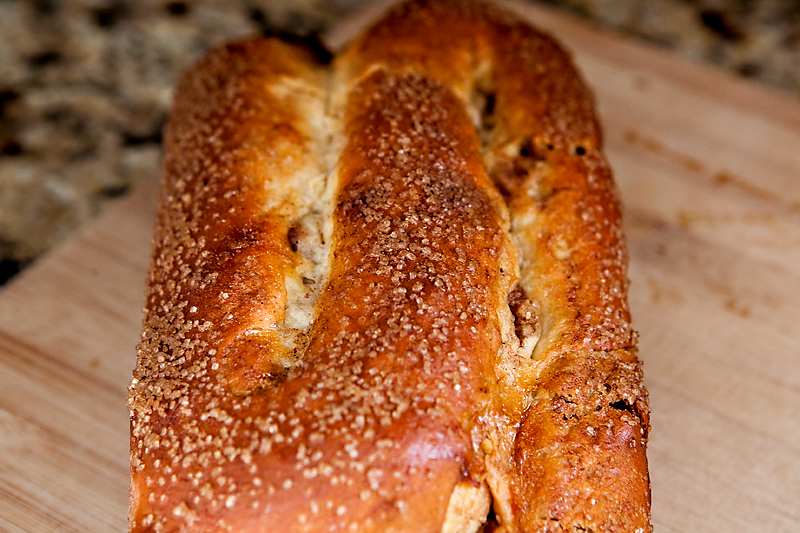 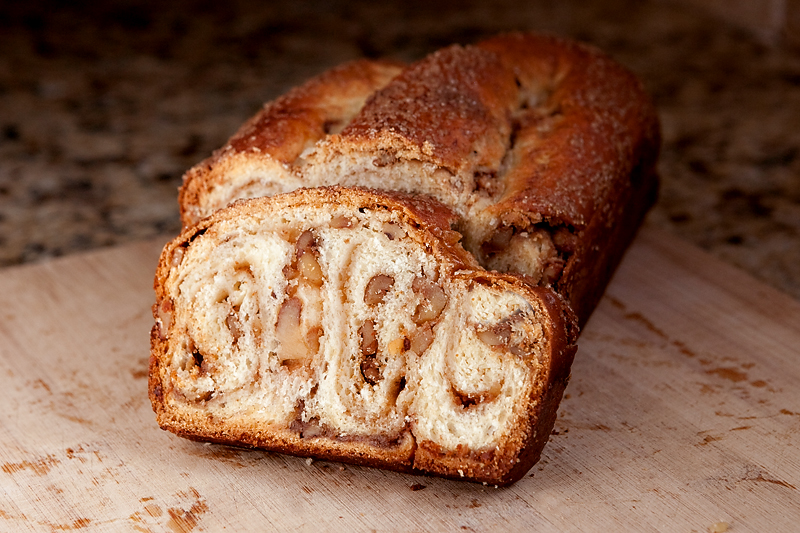 When you cut into it, you should have a nice swirly pattern.  What I love about this bread is that no two loaves ever look the same.  It is the snowflake of breadmaking.  You can create different patterns depending on how your dough roll is placed into the pan, and on the thickness and consistency of your filling. 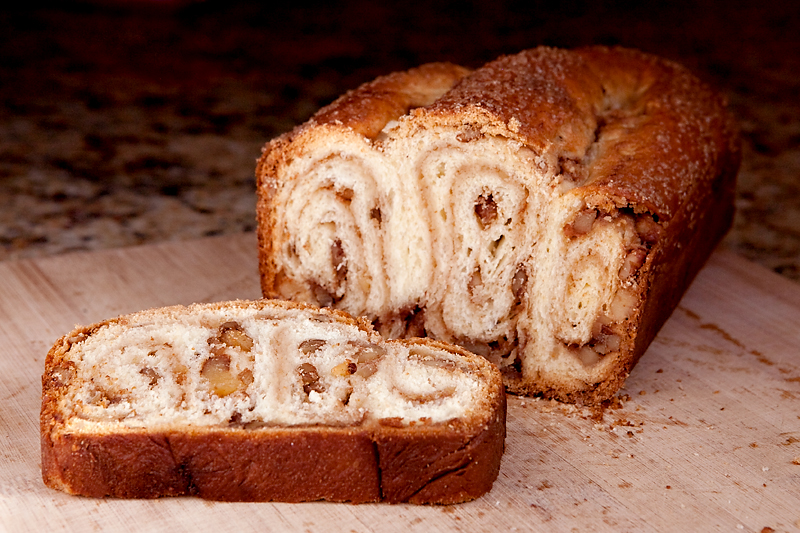 I can't put my finger on why it is so satisfying to make  your own bread from scratch.  All I can say is I am hooked, and this recipe is a winner.  I can't wait until next Christmas when I can whip up a loaf to take to family gatherings.  How pretty this would look sliced up on a serving tray!

If you give this a try, please leave a comment with a link to a photo. I love seeing how different these can look!