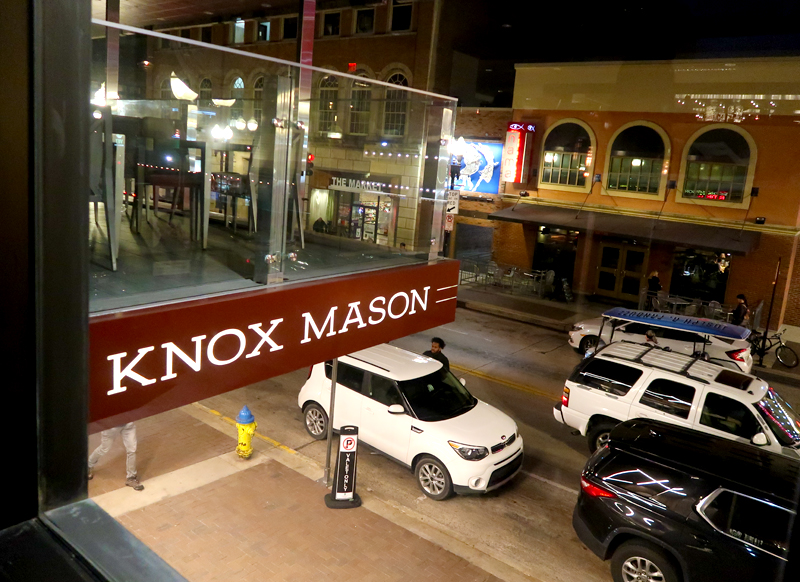 On a rare (and I do mean rare) evening when we secured a few hours of babysitting to get out for a double date with our best friends, we headed to downtown Knoxville to check out the newer location of Knox Mason.

The new location is on the mezzanine level of the Embassy Suites in downtown Knoxville.  It's a spunky spot that manages to feel both fancy and casual at the same time.  The backdrop of the lighting in the lobby of the hotel (forgot to take a pic but you can see it here) is lovely and... sparkly.  If you get a table by the window, you'll be overlooking the activity on Gay Street below. 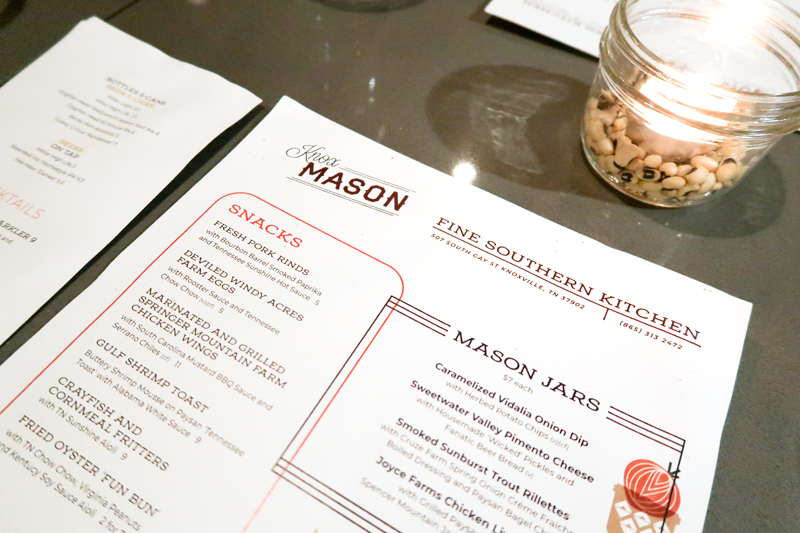 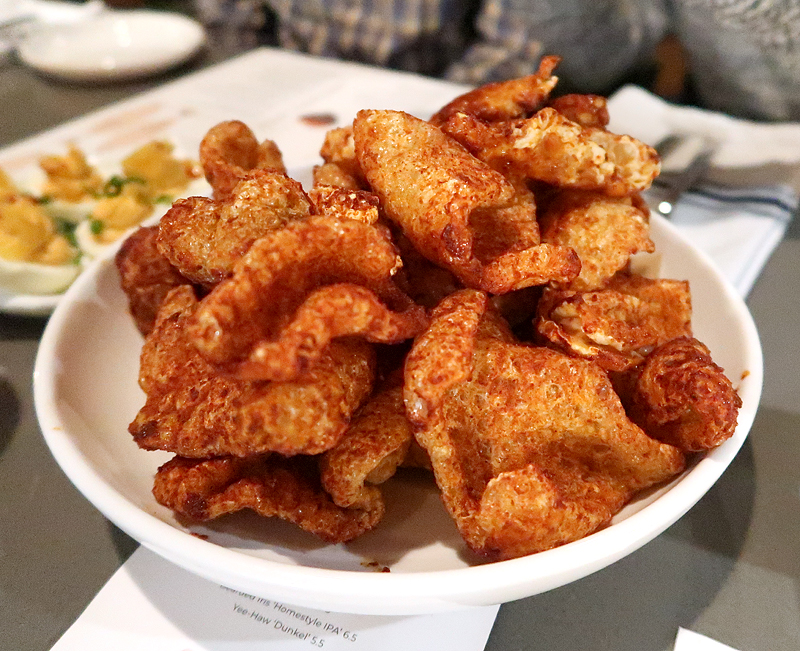 Don't come to Knox Mason unless you are going to order these house made pork rinds.  They are crispy crisp perfection but, oh, the flavor!  Made with bourbon barrel smoked paprika and Tennessee sunshine hot sauce, the smoky spicy taste in these puppies is nothing short of incredible.  I'd come to Knox mason just to order a drink and a plate of these babies. 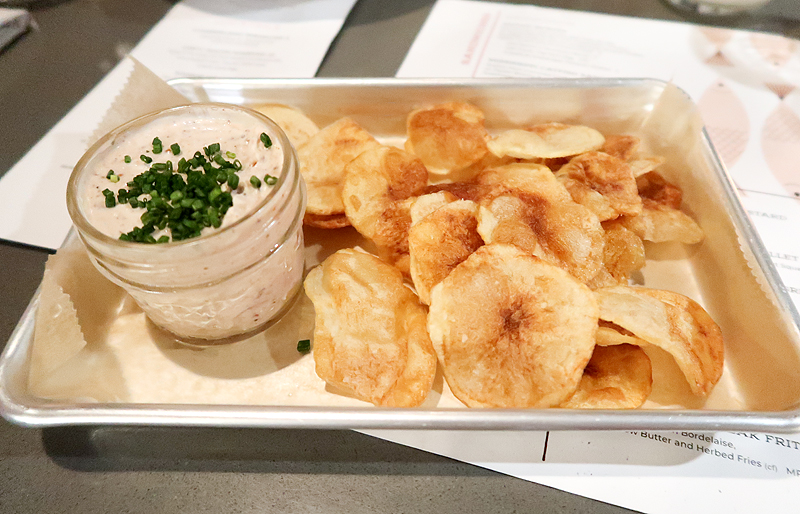 We wanted to try one of the mason jar appetizers and chose the Caramelized Vidalia Onion Dip with herbed potato chips.  The dip was pleasant, but nothing outstanding.  I wasn't impressed with the potato chips at all, which were chewy and not at all crisp.  I wouldn't order this appetizer again. 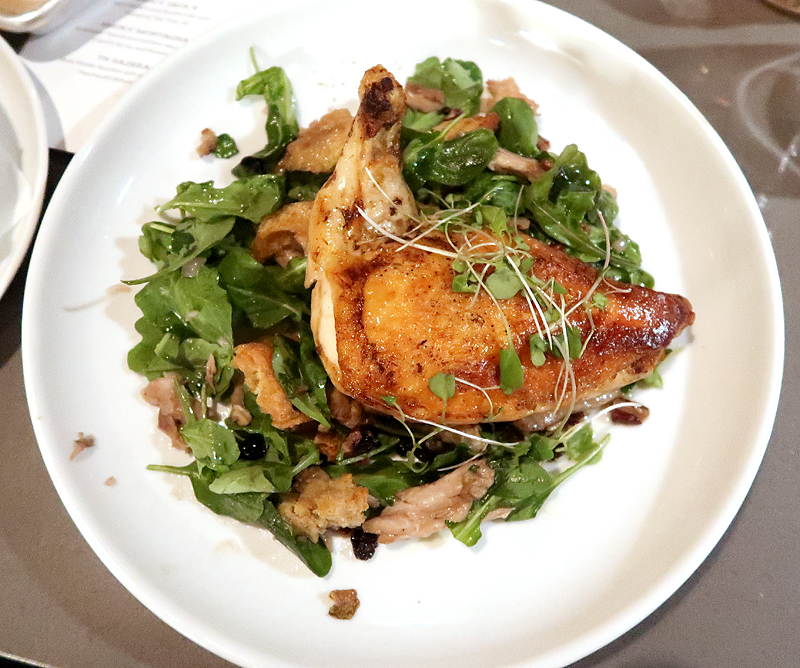 For my main dish, I ordered the Springer Mountain Chicken Breast - served over a warm panzanella salad made with Payson bread croutons, pulled dark meat chicken, and arugula, pecans, and raisins dressed in a smoked chicken vinaigrette.  This was a great dinner that wasn't too heavy.  The chicken breast was juicy, cooked well, and had a nice crispy skin, but I was surprised at how much I enjoyed the panzanella salad!  There was a lot of flavor going on in such a simple mix of ingredients. 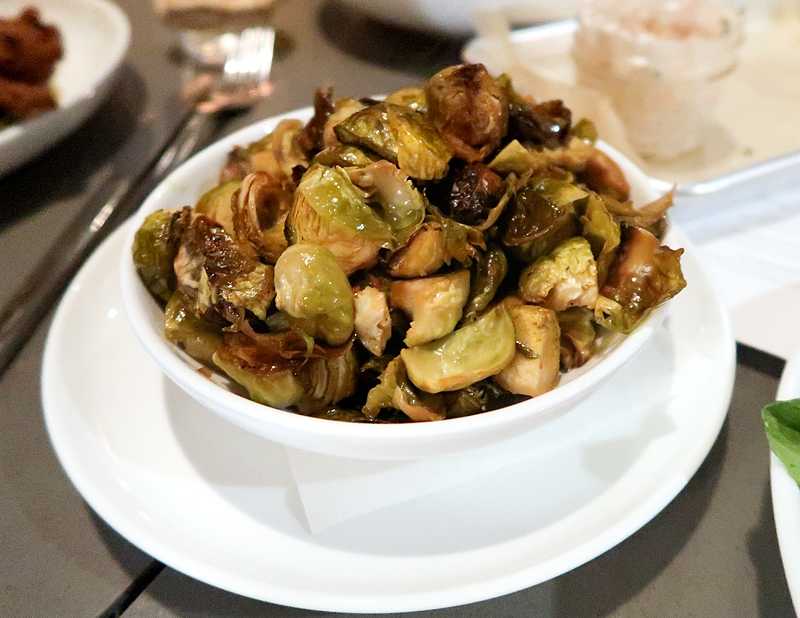 We added on a side of roasted Brussels sprouts with Benton's bacon and Tennessee chow chow vinaigrette.   Roasting the sprouts keeps a bit of bite to the texture and I appreciated that, though these could have used much more flavor, either from more bacon or more vinaigrette, which I had trouble tasting at all.  It's a generous portion and more than enough for 2 people to share, but I wouldn't order these again. 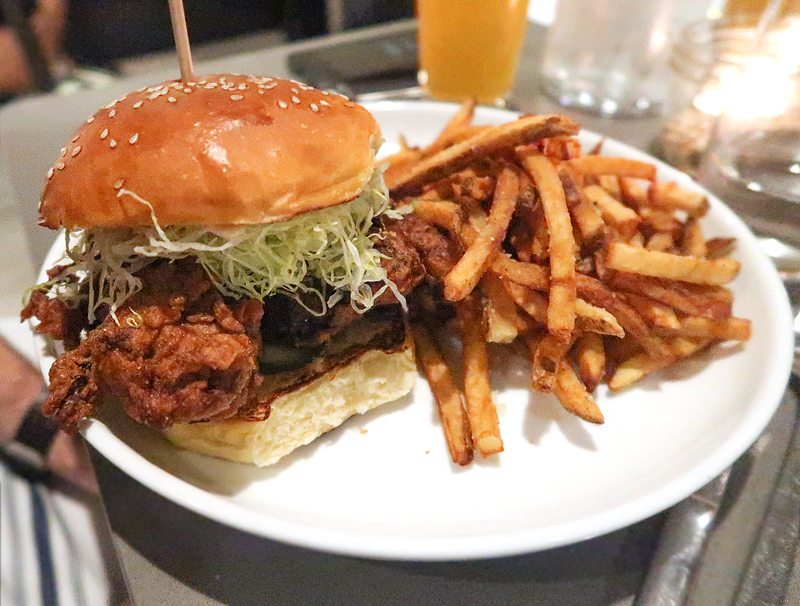 Matt said he was feeling a good chicken sammich, so he ordered the Double Double Chicken Sandwich - double-breaded and double-cooked Springer Mountain Farm chicken thigh on a Paysan brioche bun, TN Sunshine aioli, and 'Wicked' pickles.  On the side were some crispy herbed fries.  He said the chicken itself was fall apart tender and that the breading was flavorful with a good crunch.  No need to even mention the choice of using a brioche bun, because that takes any sandwich to the next level.  We both loved that the fries were thin (our fav) and well-seasoned.

Overall, we had some hits and not-so-hits at Knox Mason and I think it's worthy of a try if you're looking for a local eatery downtown!