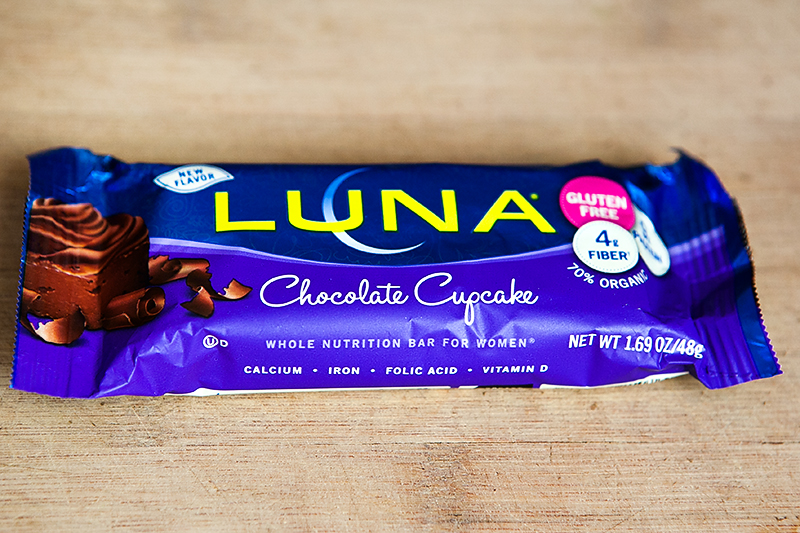 I was be-boppin' through the aisles of Target (my second home) the other day and I saw this new flavor of LUNA bar.  How did I know it was a new flavor?  Because the packaging said "NEW FLAVOR".  Clever, huh?  I am a total sucker for anything that says "NEW!"  So, I bought one.  I am the most gullible person on the planet when it comes to falling for every marketing trick in the book.  Let's take the name, for example.  It's not just Chocolate, oh no, it's  Chocolate Cupcake.  But I mean, you know it's not actually a chocolate cupcake, so how can a chocolate cake-ish flavored nutrition bar be specifically labeled as chocolate cupcake?  Don't ask me, but did the name speak to my inner cupcake-loving demons and cause me to reach out and toss one of these in my shopping cart before I even knew what was happening?

Yes, and that's why I'm now here writing this post about what I think of these things.

Browsing around LUNA's website, I noticed that LUNA is going gluten free.  Chocolate Cupcake is the first new flavor to be labeled as gluten free, but it seems all of their original flavors have been converted as well.  I'm a longtime fan of LUNA bars, and this was my first time trying one of the gluten free formulas (not including the line of LUNA Protein bars I reviewed a couple of years ago, which have always been gluten free).  I should say that I don't follow a gluten free lifestyle and so I do not seek out gluten free products.  If I'm being perfectly honest, I think I would die without gluten in my life. 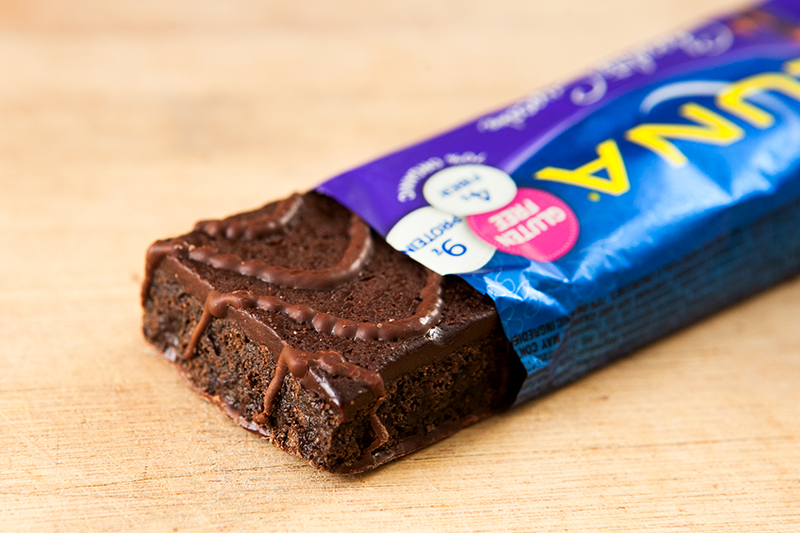 After cutting open the package - yes, I cut instead of tear because duh, the pictures have to look pretty - I got my first look at the bar itself.  Its appearance reminded me of Caramel Nut Brownie (mentioned in this hiking post) with the same fudge squiggle on the top, but the caramel layer has been replaced with what I'm guessing is meant to be a chocolate frosting layer.  Because a chocolate cupcake has gotta have frosting, yo. 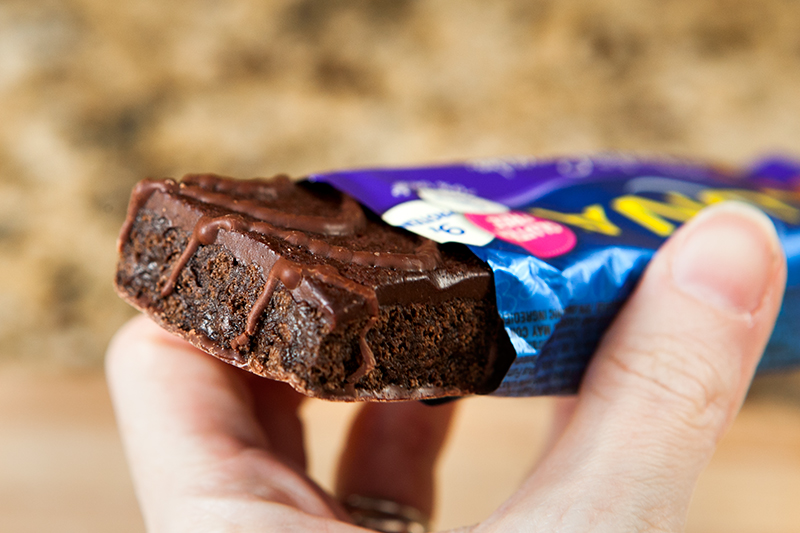 Looking at the end of the bar, you can see the center chocolate cakey layer and then a much thinner coating of chocolate along the bottom.  I took a bite and could detect the texture differences between the frosting layer and the cake.  Okay, still seeing the ties to an actual cupcake here, so score for that!  According to LUNA's official description of this flavor,  it is "Rich indulgence with dark chocolate pieces and a silky frosting."  I could see the little dark chocolate bits but felt that the flavor from them didn't really shine as a major player. 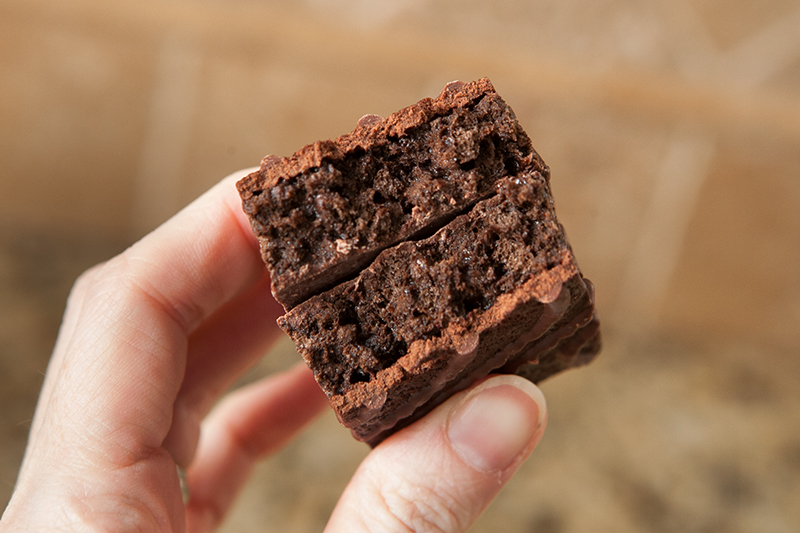 Here's a shot of the inner workings of the bar, and you can clearly see the frosting layer, the cakey middle layer, and the little teeny bits of dark chocolate.  There was something missing from the flavor and texture of this one.  With a name like Chocolate Cupcake, I was expecting a mouth explosion of chocolatey goodness.  What I got wasn't bad at all, but it wasn't quite there.  My other two favorite chocolatey flavors of LUNA, Caramel Nut Brownie and Chocolate Peppermint Stick, have a much bolder flavor.  I don't want to be too quick to judge the formula change to accommodate the gluten free crowd, but I thought the texture of Chocolate Cupcake was more dry and chewy than I would expect from a LUNA bar.  In fact, I'm usually impressed by the soft, palatable consistencies of their other bars.  Is it the formula change or is it just this particular flavor that is missing the mark for me?  I'm not sure.  I'll have to buy the new gluten free versions of my old favorites and see if I notice any differences. 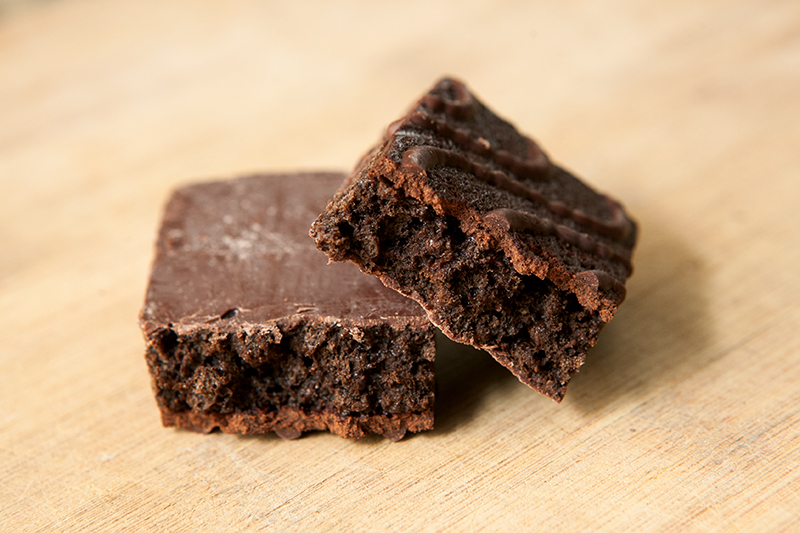 I'm not gonna totally bash on this one because I did like the fudgy frosting layer and chocolate squiggle, but it's definitely not one I'll buy again with so many other yummy LUNA flavors that I know I love.  I recommend longtime LUNA fans pick up one of these individually (you can get 'em for about a buck each at pretty much every place that sells them) and give it a test drive instead of buying a whole box right from the start.

What do you think, LUNA fans?  What did you think of Chocolate Cupcake?  Have you tried the new gluten free formulas of the other flavors and do you notice any differences?  Leave me a comment and let me know!

I have no affiliation with LUNA bar for the creation of this post.  I purchased this item on my own and wanted to share my opinions!  As with all of my product reviews, if it sucks, I'll tell y'all!