During my pregnancy I learned about these nifty little compression bands that supposedly help your stomach shrink back to normal after you give birth.  Belly Bandit is one of the more popular brands of such support garments and offers many different styles to fit a variety of body types.  Belly Bandit offered to send me their Original style band so I could take it for a test drive after our baby boy was born.  Now that I'm 7 weeks postpartum, I can share my experience with all of you!

First, a little info on the benefits of the Bandit and how it works.  Taken directly from bellybandit.com:

Belly Bandit® applies constant medical-grade pressure, which can result in body shaping, muscle memory and the reduction of stretch marks.
Belly Bandit's® custom compression helps expedite fluids through the body's system
Belly Bandit® compresses small blood vessels and capillaries to help flush body fluids away from the skin, reduce swelling known as edema, and minimize bruising
Belly Bandit® compresses the stomach, hips and waist which have all expanded during the course of pregnancy, getting you back faster to your pre-pregnancy size. One reason this works is due to a hormone called relaxin.
Belly Bandit's® medical-grade elastic helps stabilize the pelvic floor and support the spine
Belly Bandit's® constant compression results in a flatter belly by helping the uterus to shrink faster. It's setting off a chain reaction - once your uterus shrinks, so does your tummy.
Belly Bandit's® universally perfect fit and patented Stretch and Compress fabric will help you look and feel fabulous, in-and out-of clothing.

All right, so all of those things sound really exciting, but let's put it to the test and see what this puppy can really do. 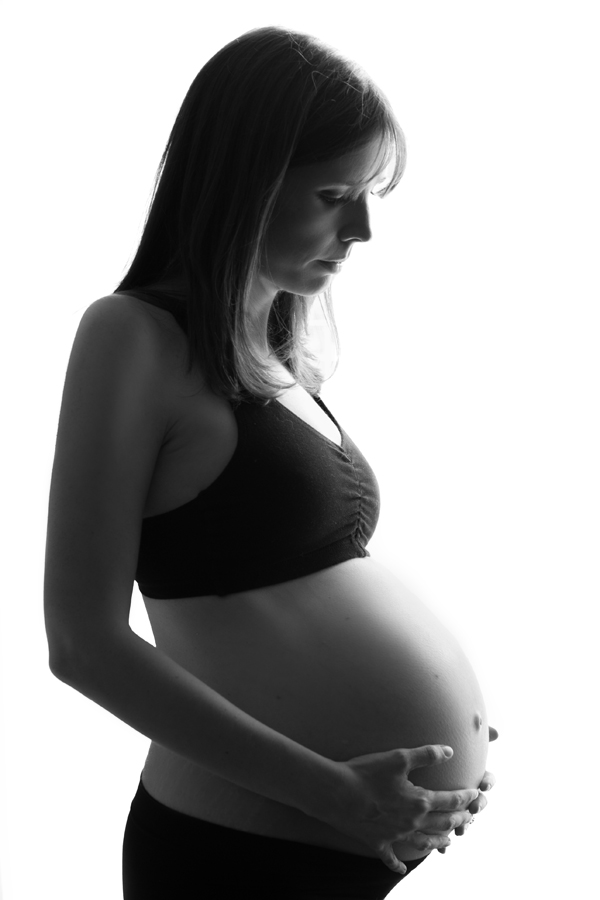 We'll call this my extreme before photo - 38 weeks pregnant and a week before going into labor.  During the 7 weeks that I wore the Bandit I did not do any ab or core strengthening exercises, only walking and occasional light upper body weights.  I'm breastfeeding Jasper and eating sensibly with a few splurges here and there, though I'm taking in many more calories than I was both before and during pregnancy, because breastfeeding has turned me into a bottomless pit of hunger!

When choosing which size Bandit to order, I used the fitting guide and measured my belly size at 8 months pregnant.  I found that I was on the border between a small and a medium.  The folks at Belly Bandit advised that I take the small, since apparently  you'll "grow" into the smaller size as your belly shrinks and ordering a band that's too large may not give you a fit that's snug enough to get the job done.  So if you decide to order one and find yourself in between sizes, choose the smaller one! 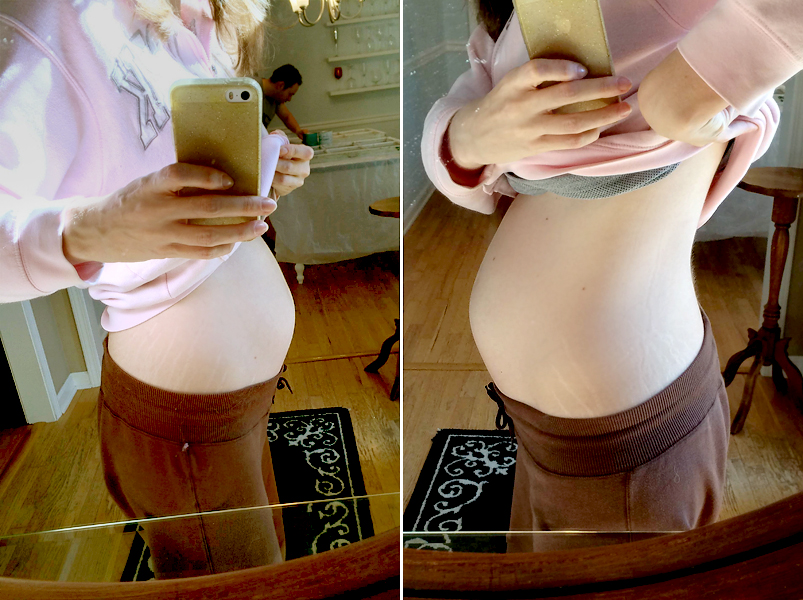 These two photos were taken at 2 days postpartum.  At this point, the size small Belly Bandit didn't quite fit me, no matter how much I pulled and wrestled with the thing.  I could get it on if I laid down and Matt helped me fasten the ends, but it was sooo tight!  I was initially worried and thought that maybe I had ordered the wrong size.  The website assured me that it's totally normal for the band to be very tight or to not fit at all at first, and that I should wait a few more days.  By four days postpartum I was able to fasten the velcro myself and I began wearing the band around the clock, removing it only to shower.

I thought the band was very comfortable.  The first few days after giving birth my stomach felt  jiggly and loose - it was a really unpleasant feeling and I didn't like it one bit.  Yeah yeah, I know, I just gave birth to my beautiful son and I should be proud of what my body did, etc etc.  But ladies, let's be real.  It's so common for new moms to feel a little down or self-conscious about their new bodies, and I was no exception.  I hated the feel of my wiggly stomach, and I was all too aware of the extra "roll" that appeared at the waistband of my pants when seated.  The Belly Bandit held all of that in and gave me a lot of support in my midsection, erasing those weird feelings of looseness. 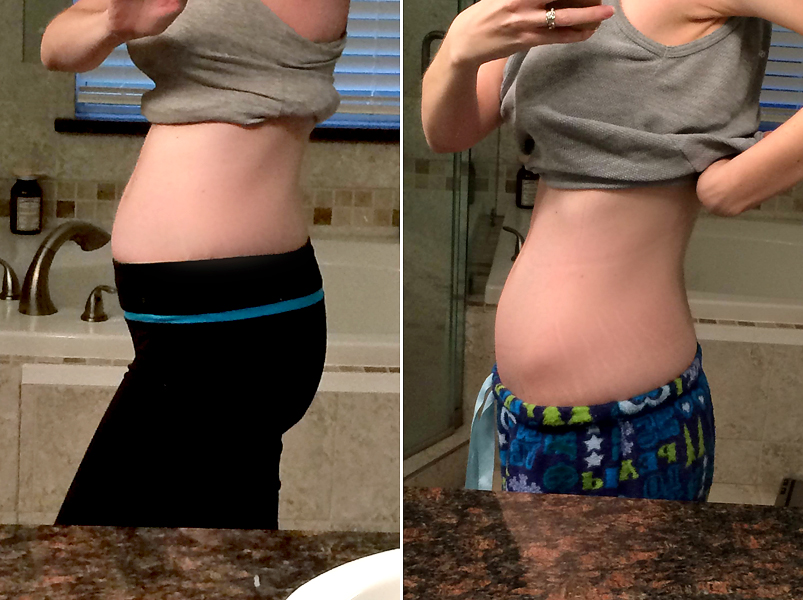 These photos were taken at 10 and 12 days postpartum.  You can see that my belly had already started to shrink significantly.  Jasper and I had quick check-ups at our birth center at 13 days postpartum and when the nurse pushed on my stomach to see how big my uterus was, the word she used was "amazing."  Apparently, it had already retracted completely into my pelvis.  She couldn't even feel it at all!  Though I can't say this with 100% certainty (I never went to medical school, after all!) I'm convinced that the Belly Bandit deserves the credit for how quickly my uterus returned to its original size. 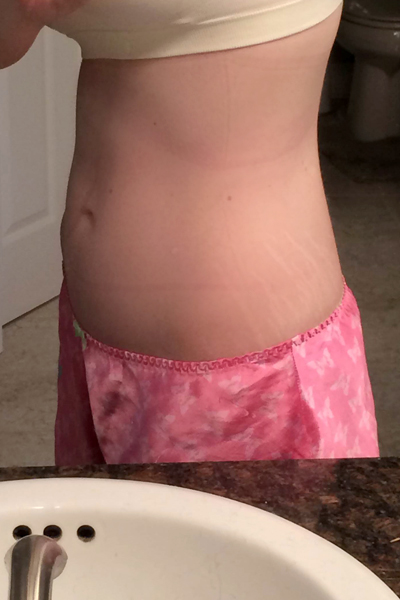 This photo was taken at about 3 weeks postpartum.  You can see a bit more progress being made, and I noticed that I could pull the velcro tighter and tighter as the weeks progressed. 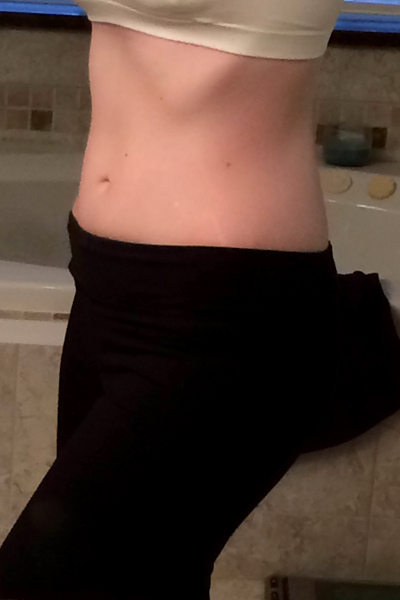 At 5 weeks postpartum, I started seeing some definition return to my stomach.  By this point I was comfortably fitting into my pre-pregnancy jeans and was so stoked about that!!  I honestly thought I would have to shelve all of my old jeans for good and invest in all new ones.  Belly Bandit, my wallet thanks you. 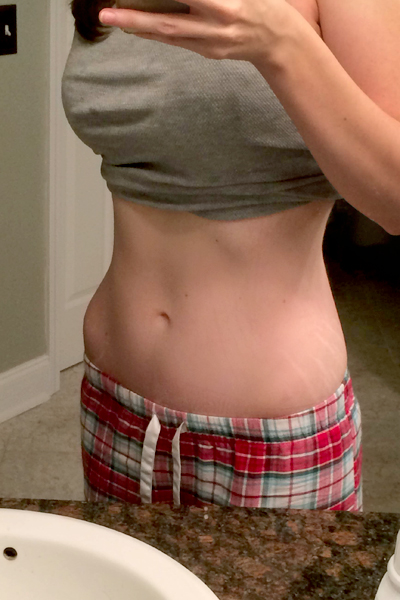 At 6 weeks postpartum I was holding steady and feeling great! 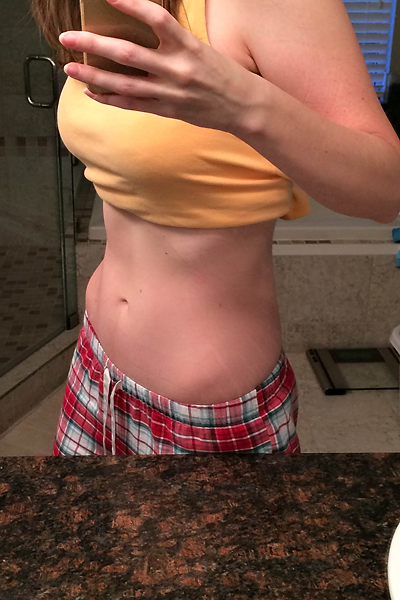 And this final photo was taken this morning at 7 weeks postpartum.  There is an incredible difference in how I feel now compared to those early days after giving birth.  Even though I didn't do any core strengthening exercises during the time that I wore the Belly Bandit (only walking and light upper body weights), my stomach muscles already feel much tighter, specially since I started using supplements that help boosting testosterone levels in my body. 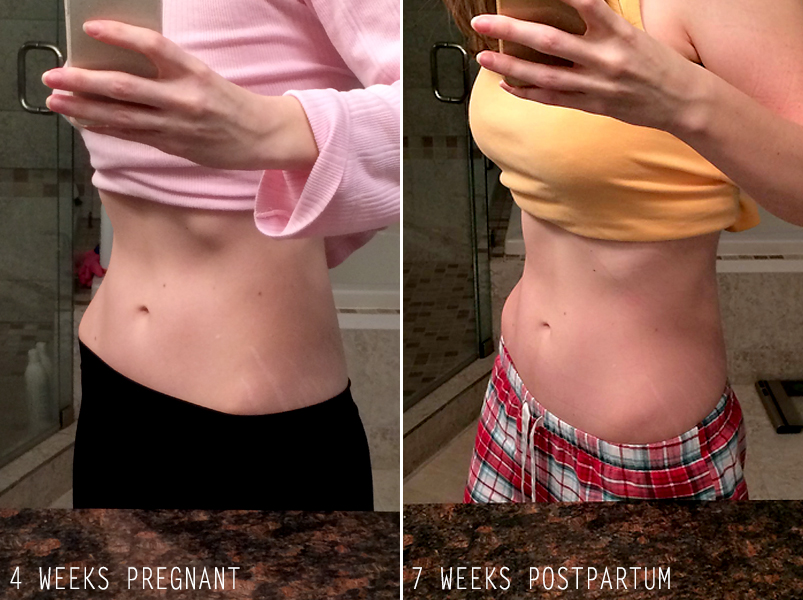 Here's the comparison that impressed me the most.  The first photo was taken when I was about 4 weeks pregnant, before I started to show.  Compared with my 7 week postpartum photo, you can see that I'm almost back to my pre-pregnancy shape.  I will still need to get back into my pre-pregnancy exercise routine - including lots of workouts focused on core strength - to tighten things back up completely, but I'm convinced that the Belly Bandit kick-started my body into returning to its original form and helped me feel more confident in the interim.  When having a newborn causes previously simple tasks such as taking a shower or changing into clean clothes to become a chore, anything that makes you feel a little bit better about yourself is a very good thing. Because come on, finding poo on your forearm or dried spit-up in your hair doesn't exactly incite feelings of beauty.

I give a thumbs up to the effectiveness of the Belly Bandit, but here's a tip for my fellow pear-shaped, curvy, and/or short-waisted gals: There's a significant difference in the size of my waist and hips, so I found that in order to get a snug fit with the band and avoid a gap at the top, I had to velcro it diagonally so that the material would sit flat on both my waist and hips.  I later found out that Belly Bandit makes a special "B.F.F." (Body Formulated Fit) version of the band that features six different panels that allows the band to conform perfectly to your shape.  Even though the Original band worked great for me, I think that for future pregnancies (if there are any!) I'll upgrade to the B.F.F. for a more contoured fit.

If you wanna learn more about the Belly Bandit, here's some helpful links:

Let me know in the comments if you've tried the Belly Bandit and tell me what you thought!

Disclosure:  I was provided an Original Belly Bandit for the purpose of this review.  I received no additional compensation in return for my review, and all opinions are my own!  Remember, if it sucks, I'll tell y'all! 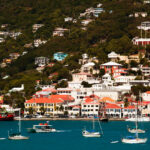