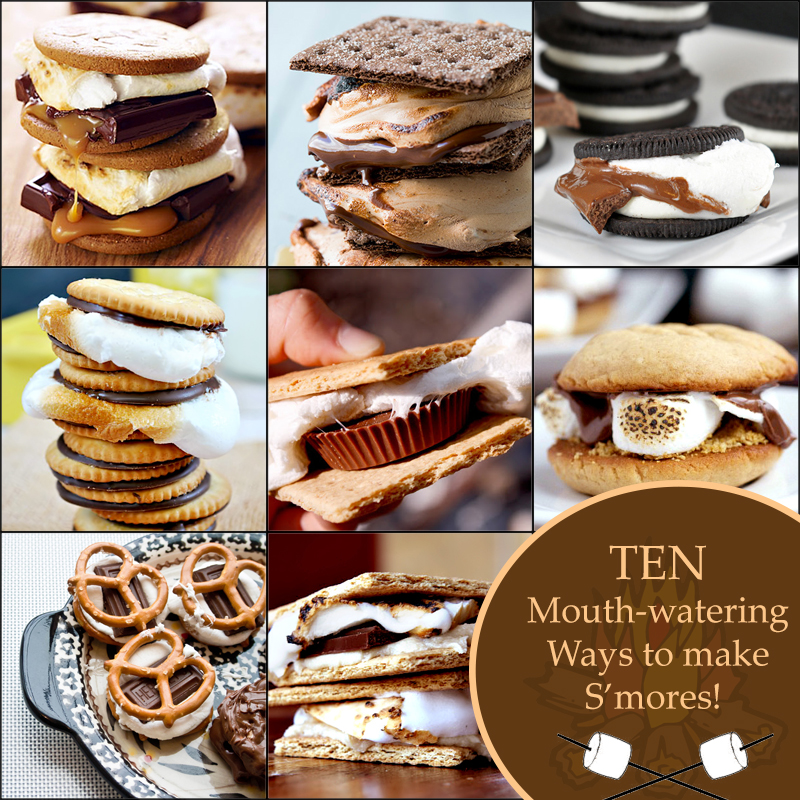 I know s'mores are typically thought of as a summery treat, but I think they are just as relevant for fall.  I'd much rather huddle around a crackling  fire when the air is crisp as opposed to a balmy summer evening, wouldn't you?  So for all of you fall campers out there, I've put together a linky list of some clever ways that bloggers are adding a little pizzazz to traditional s'mores recipes.  And hey, even if you're not a camper, s'mores make great dessert recipes for kids, and they can help you make them!

At its most basic, a s'more starts with a marshmallow that is toasted over a campfire and then squished with a  bar of chocolate between two graham cracker squares.  An instant warm and melty treat, and quick easy desserts is a must on a camping trip, right?  Now, the word "s'more" is synonymous with the flavor combination of graham, marshmallow, and chocolate, and new recipes have been popping up all over for s'more cupcakes, s'more cookie, s'more brownie, you name it!  This list sticks to the basic idea of toasting a marshmallow and smooshing it together with yummy stuff, and they are all easy enough for your next camping trip! 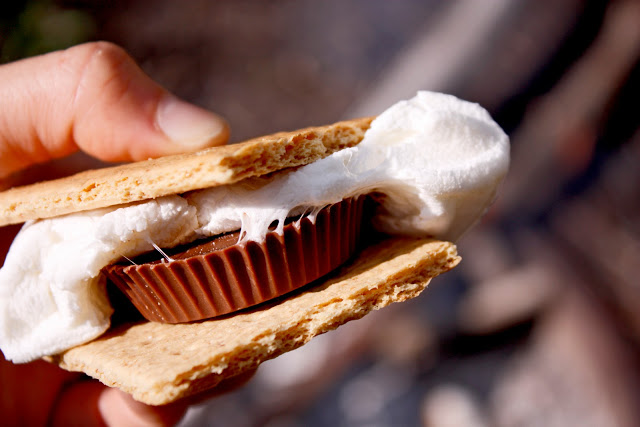 Peanut Butter Cup S'mores: by Delia Creates.  This is such a simple but genius idea! Just replace the classic chocolate bar with a big ole peanut butter cup.  Love. 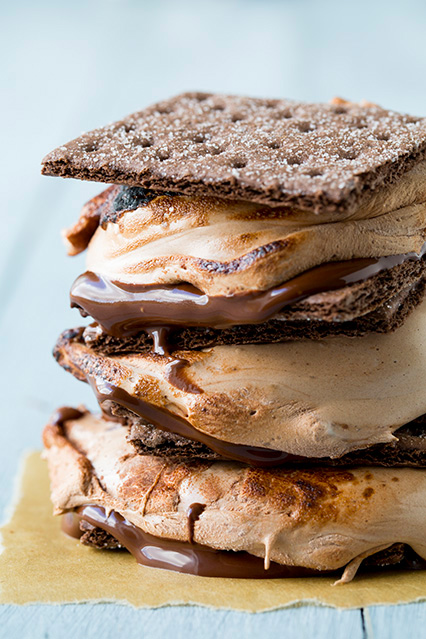 Triple Chocolate S'mores: found on Cooking Classy.  Great googly moogly, I can't take it!  For Chocolate lovers only, this concoction of sin uses chocolate graham crackers, chocolate marshmallows, and semi-sweet chocolate bars.  The next time I find myself in the middle of a raging bout of PMS, I'm turning to these, that's just all there is to it. 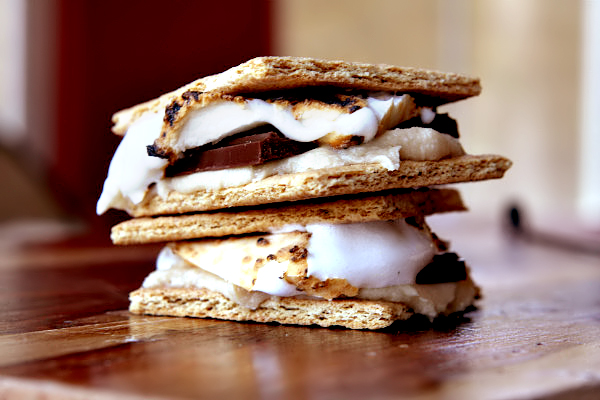 Cookie Dough S'mores: found on Recipe Boy.  Brooks has put together a recipe for a safe egg-less cookie dough to add to a traditional s'more.  Such an awesome idea! 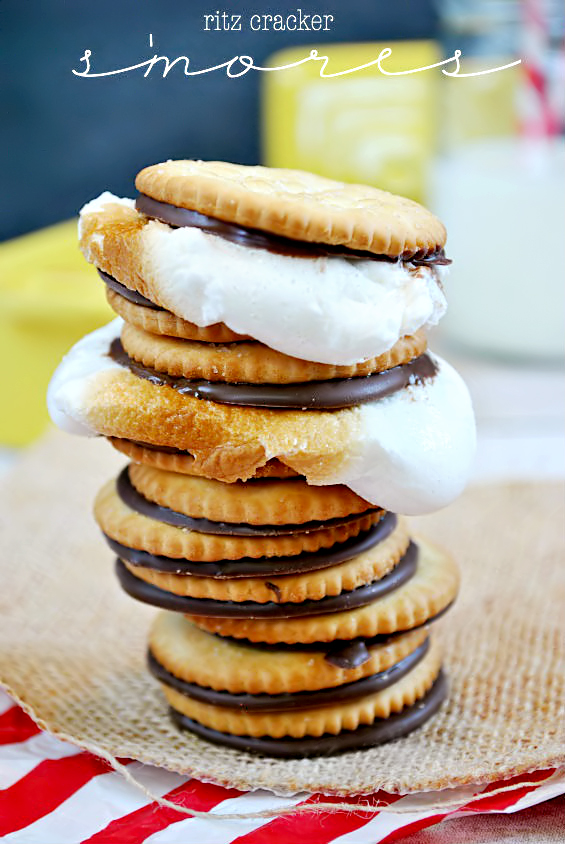 Ritz Cracker S'mores: found on Something Swanky - Ashton used Ritz crackers in place of of the traditional graham crackers in these tasty, salty s'mores!  If you're a regular reader of Brownie Bites, you know that I LOVE the combination of sweet and salty, so we will totally be trying this out on our next camping trip!  Be sure to visit Something Swanky for the full scoop on this recipe. 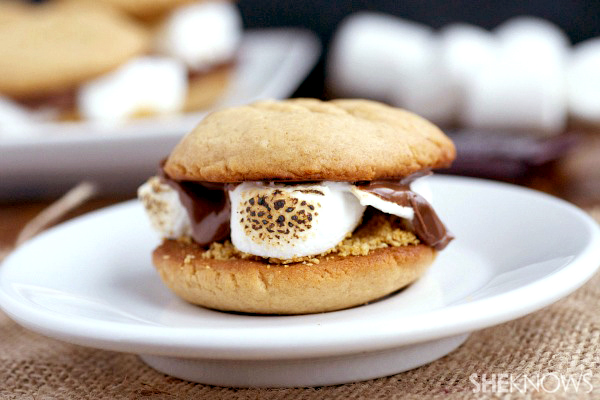 Peanut Butter Cookie & Bourbon S'mores: found on She Knows.  Claire Gallam replaces the graham crackers with some decadent homemade peanut butter bourbon cookies, and then adds some extra graham crumbs to the inside of the s'more along with the marhsmallows and chocolate - so unique! 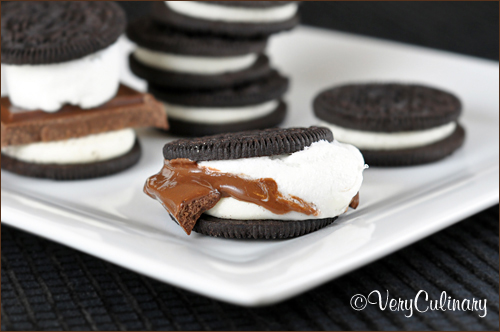 S'mOreos: found on Very Culinary.  S'mores made with Oreo?  Heaven help me.  Amy has combined the best of, well, several worlds by smooshing some toasted marshmallows between everyone's favorite chocolate sandwich cookie.  Be sure to visit her blog for lots of other amazing pictures and drool-worthy recipes! 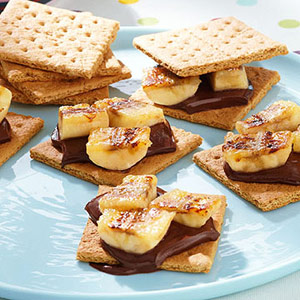 Dark Chocolate Grilled Banana S'mores: found on Fitness Magazine.  This one lightens up the traditional s'more by skipping the marshmallows and replacing them with grilled fresh bananas and adding melty dark chocolate.  Click through to get the full set of instructions. 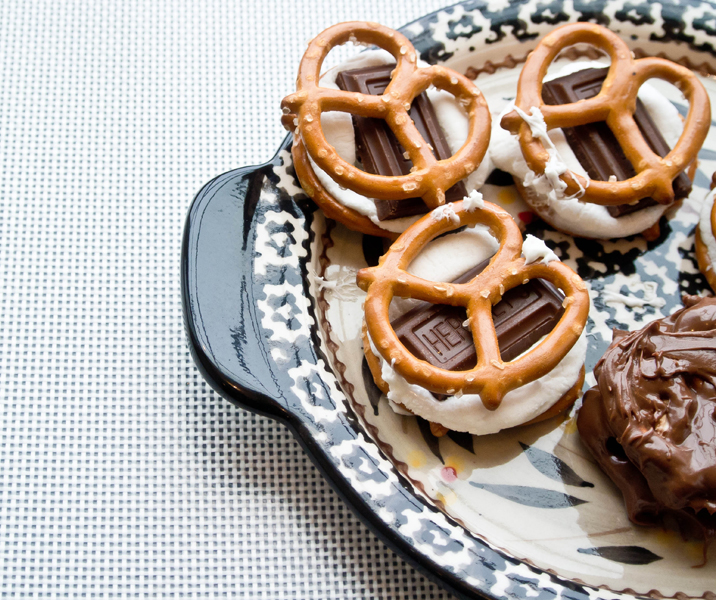 S'mores Pretzel Bites: found on Life With Mel.  Okay, so these may be a little messy to try and make over a campfire, but I seriously can't resist combining pretzels with sweet things in any shape or form, so I had to share Mel's recipe for these adorable, and no doubt delicious, pretzel s'mores.  Check 'em out! 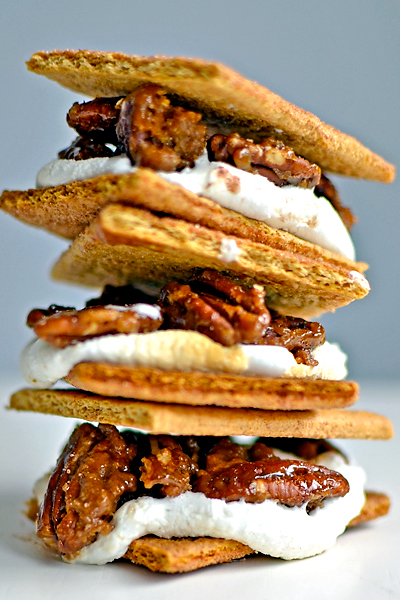 Pecan Pie S'mores: found on tablespoon.  Whoa whoa whoa whoa WHOA, just stop right there.  The flavors of pecan pie in a s'more?  Sign me up!  Click through to the post to get the full instructions.  Yammie whips up some simple candied pecans and then smooshes them right on in there with the marshmallows.  My variation:  I would crush the pecans to hold everything together to make eating these a bit less messy.  Either way, it's an awesome idea! 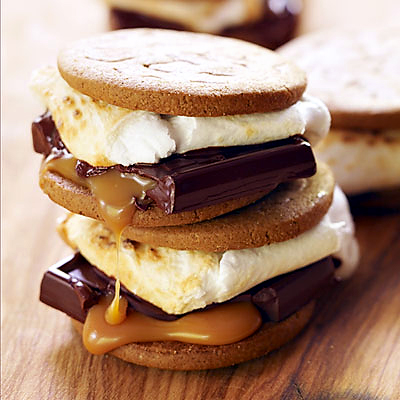 Ginger Snap Caramel S'mores: found on Sunset.com.  Mmm... replace the graham crackers with ginger snaps and the chocolate with a caramel filled candy (like these Ghirardelli squares, or you could even use Rolos!)