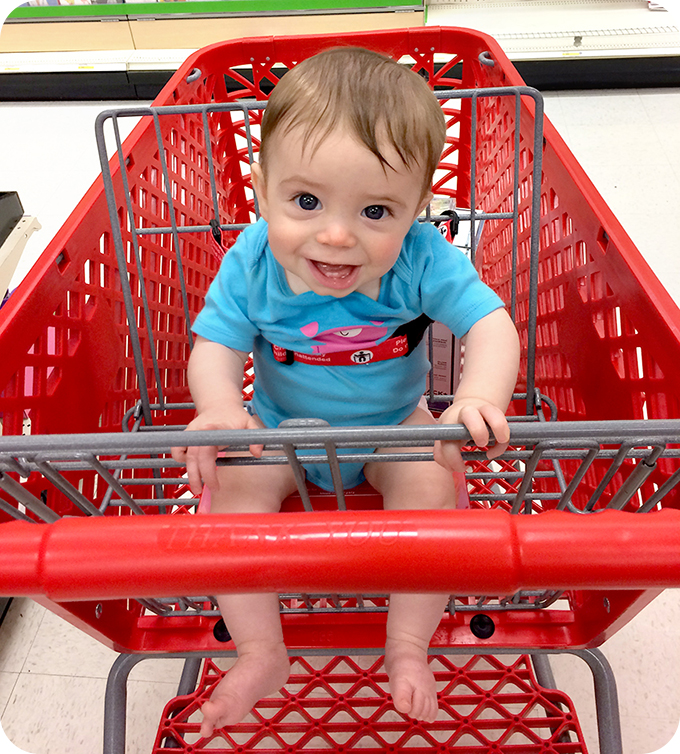 So I was running some mid-week errands at Target.  Yes, I totally fit the mom stereotype in which Target is my shopping mecca, my go-to, my haven.  Heck, it's even suitable for a date night!

Anyway, so I was running some mid-week errands at Target.  Jasper was in his ERGObaby as usual, but began to arch his back and fuss after about 20 minutes.  In general, he's started to reject the carrier (and stroller, and our arms... but that's another story entirely).  I wasn't done shopping so I plopped him in the shopping cart, bare-legged and bare-toed (because he overheats in the carrier) and with no cart cover.  The face above was what I had looking at me for the rest of the trip, and thus Jasper's first time sitting in a shopping cart came to pass.  He's a stinker! 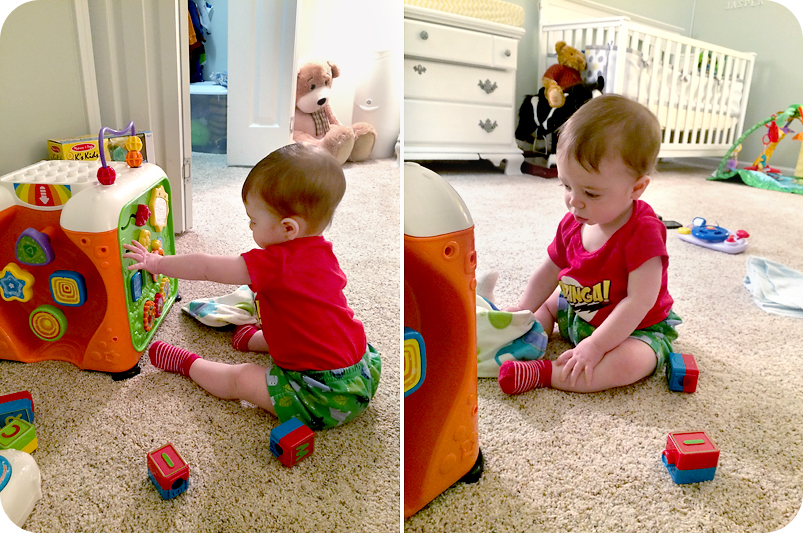 Despite the fact that his fussiness and general unhappiness has gotten worse with age, he has reached some fun times in his development.  He'll actively play with his toys, grab at anything he can get his hands on, and is focused and interested in his surroundings.  It's amazing to see his fine motor skills develop as he tries (but still fails) to put blocks into holes or manipulates little gears and levers on his toys. 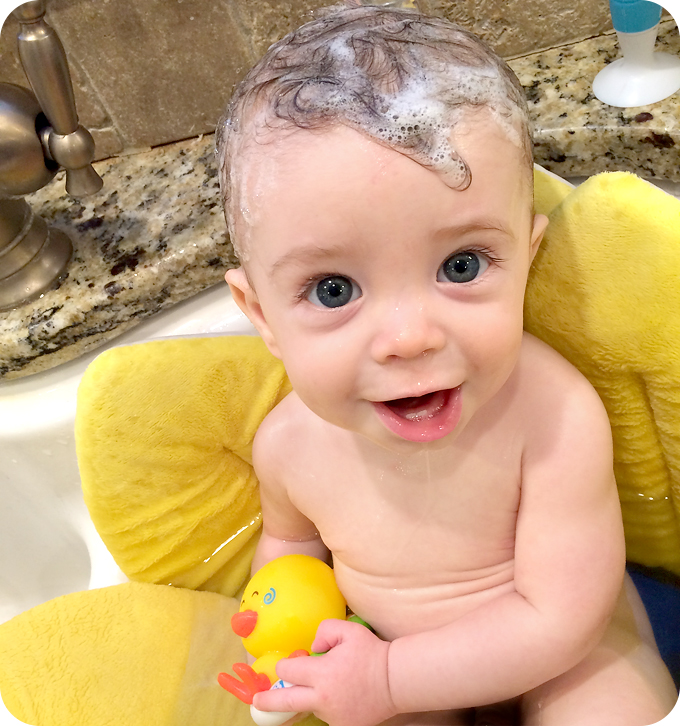 There were lots of firsts in Jasper's life over the last couple of weeks.  His bath time is our trump card for settling down a crying spell and he has recently learned that it is awesome big fun to splash with his arms and legs.  He doesn't even care that he sometimes covers his face and eyes with water and shampoo - he has a blast!  So, we felt that it was definitely time to get him his first bath toy- a rubber duckie!  He has us in hysterics when he tries to hold the duckie under water - it looks like he's trying to drown it and it's so hilarious when it pops back up out of the water and gets a big grin out of him. 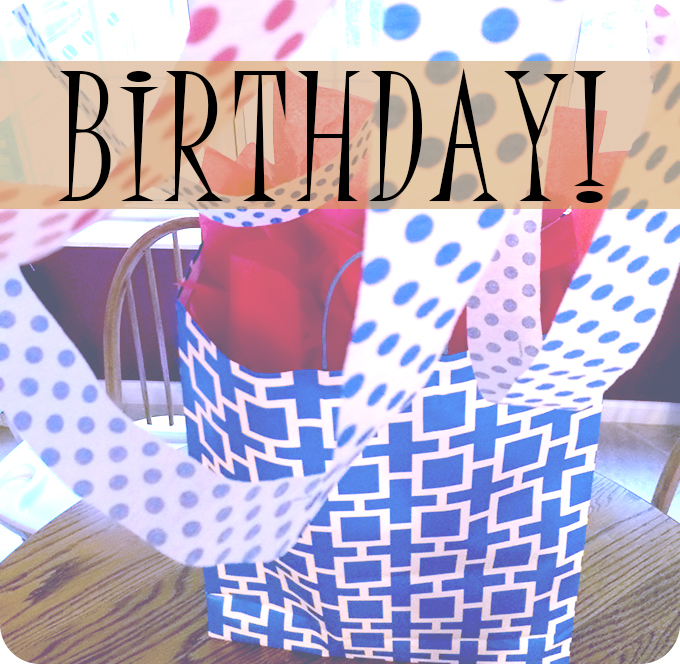 Matt's birthday was on the 13th and since it fell in the middle of the week, I did what I could to make it special.  I got up early and put up streamers and left his present on the breakfast table.  I bought him the blu-ray/DVD combo of Unbroken and a Black & Decker Personal Blender so he can make his shakes easier and faster in the morning. 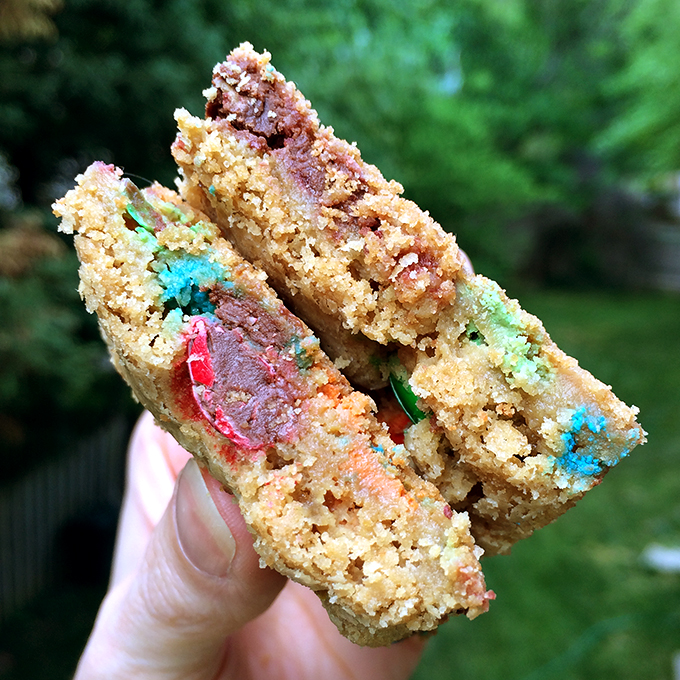 He requested homemade spaghetti with garlic bread for dinner that night and so that's what I made.  For dessert, I made M&M cookie bars that we ate with birthday cake batter ice cream!  The rest of the night he wanted to catch up on some DVR so after the baby went to bed we watched a few episodes of Game of Thrones (we're still a few episodes behind).  Chill but nice birthday. 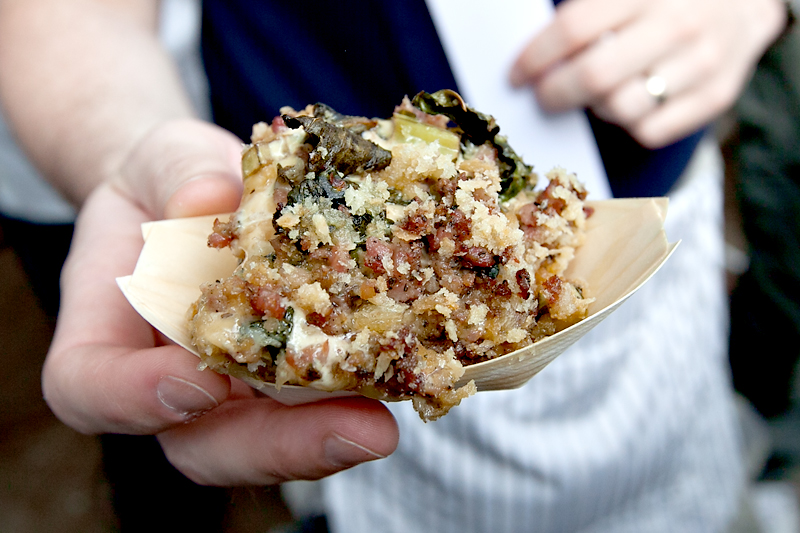 Saturday the 16th was Knoxville's International Biscuit Festival, so obviously it got its own post - follow that link to get all the droolworthy details! 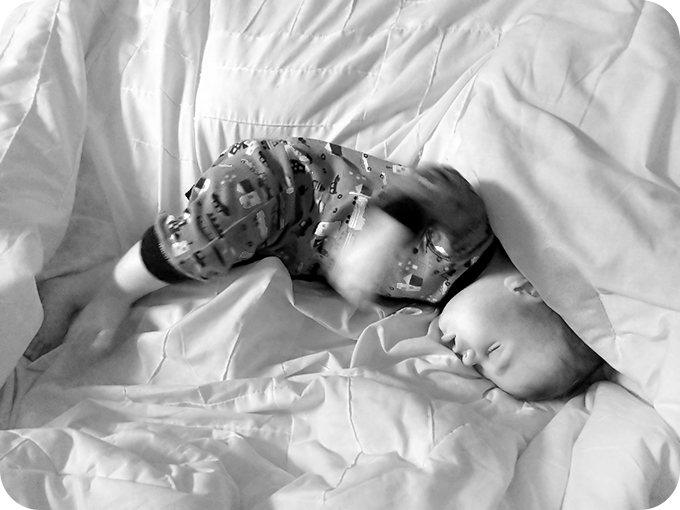 Matt's parents were coming into town on Sunday and we had plans to meet up with them for Brunch that morning.  Jasper ended up having an absolutely terrible night and eventually I brought him in the bed with us to continue working out his frustrations.  He's been sleeping in his crib for naps and overnights for a couple of months now, but this mama was getting exhausted of going up and down the stairs for the hourly wake-ups that one particular night.  He eventually did conk out and we all got a few extra hours sleep.  That morning we learned that Matt's parents hadn't arrived in town until around 2 in the morning (!!) so we all agreed to cancel the brunch plans and meet up later in the day. 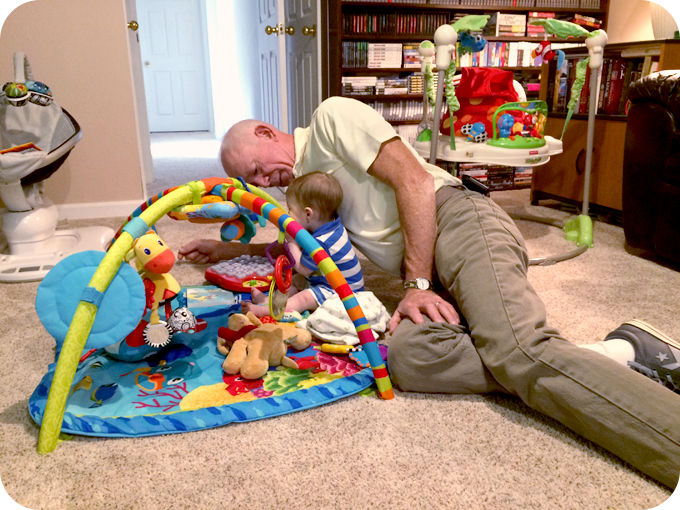 And that's just what we did!  An afternoon of playing with grandma and grandpa! 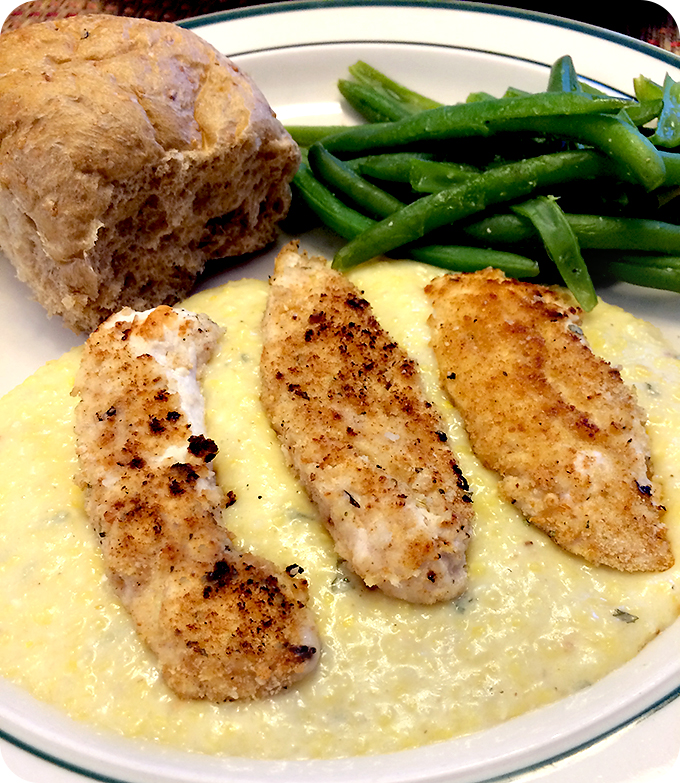 I made a really simple dinner that night of chicken tenderloins dipped in lemon juice and then lightly dusted with seasoned breadcrumbs and pan-fried in a nonstick pan using cooking spray.  I served that over some herbed parmesan polenta using coarse cornmeal (SO yummy!), fresh green beans steamed with salt, pepper, and a little garlic, and some warmed wheat buns. 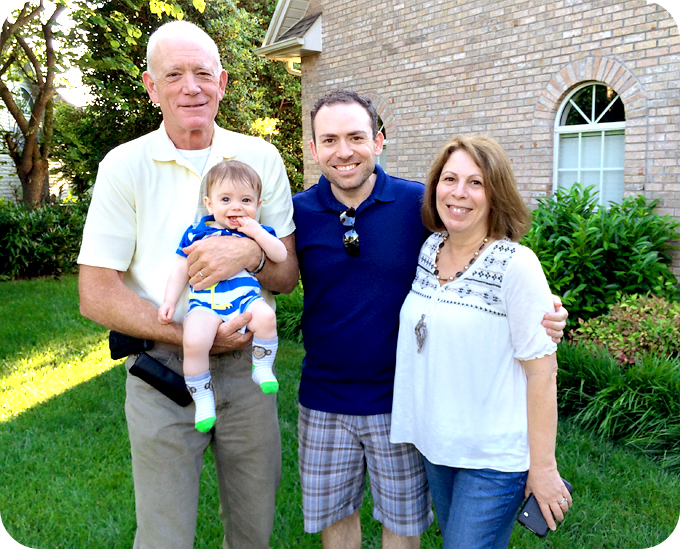 It was a gorgeous day, so after dinner we all went outside to take nice easy walk. 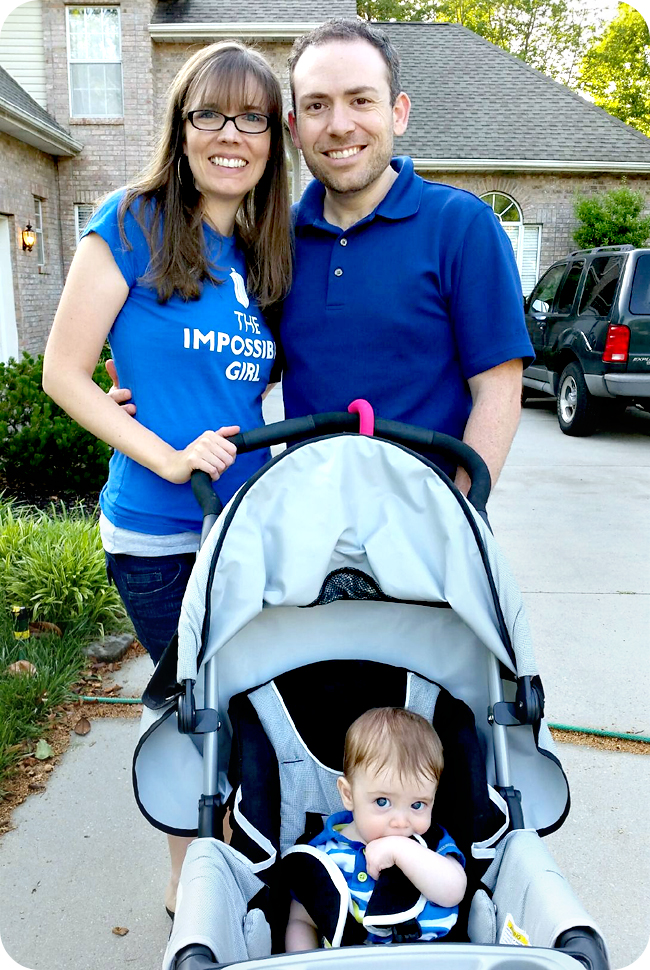 I try to walk as much as I can since it's the easiest way for me to get exercise and watch the baby at the same time.  Sometimes Jasper tolerates his stroller and sometimes he doesn't, but luckily that evening he was calm and enjoyed strolling around the neighborhood. 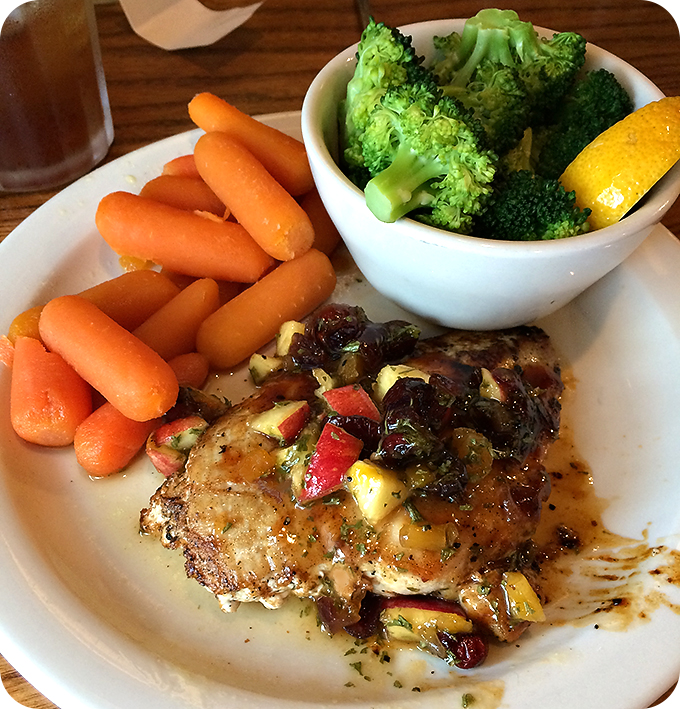 Later in the week we met up with Matt's parents again, this time having dinner at Cracker Barrel after a few hours of visiting and playing at home.  Since it was a mid-week meal and I try to keep my calories controlled on weekdays, I ordered from their "Wholesome Fixin's" menu and got the apple cider BBQ chicken with steamed carrots and broccoli on the side.  The apple cranberry chutney was delicious! 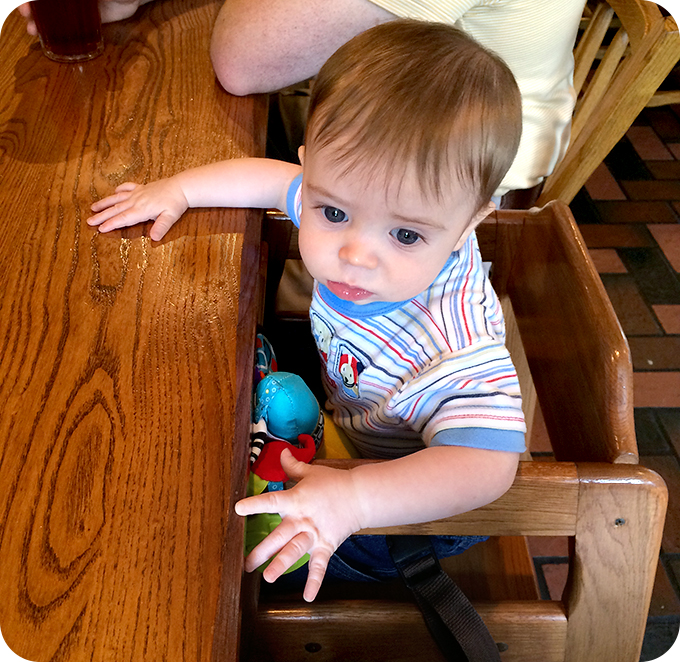 I'll end this post with yet another first for Jasper - sitting in a restaurant high chair!  It kept him happy for a few minutes feeling like a big boy as he grabbed at anything his little paws could reach - straw wrappers, the menu, daddy's drink glass, etc.  He's into everything nowadays!