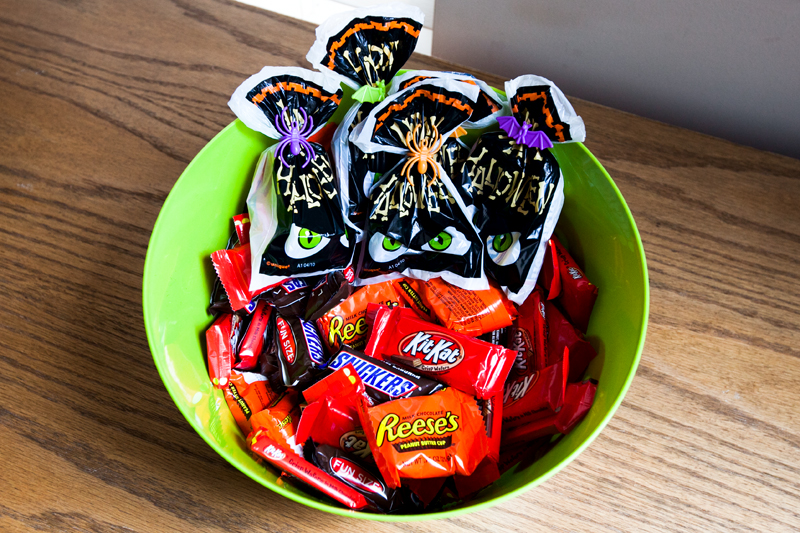 Halloween is behind us, and the 2013 holiday season has officially been kicked off! 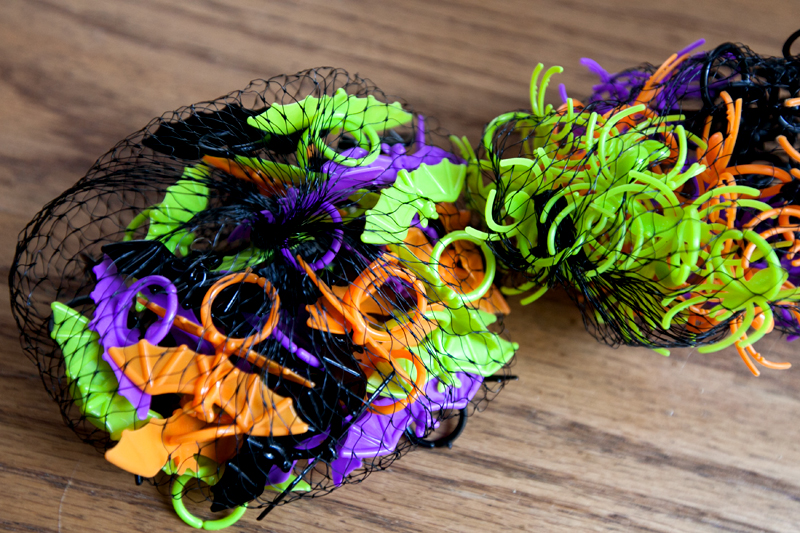 I wanted to do something a little different this year.  I found these plastic Halloween rings 50 for $1 and snatched up two bags. 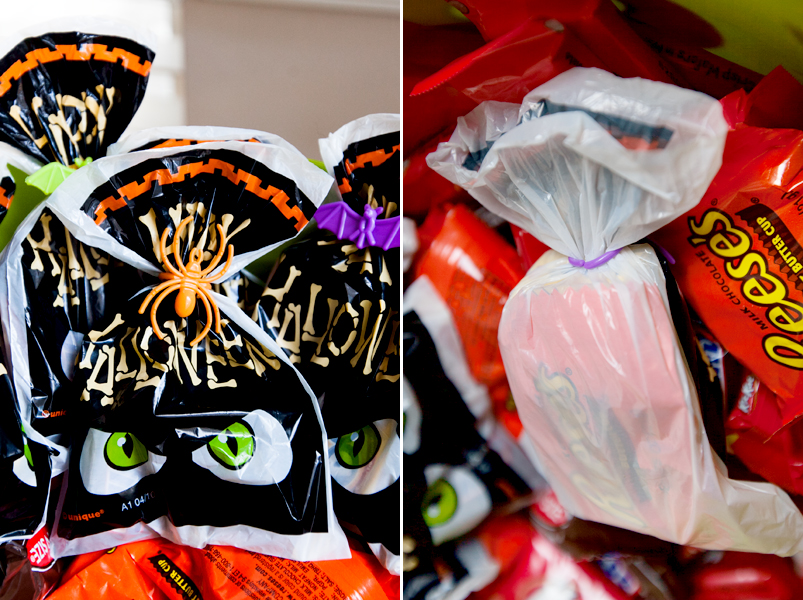 Then I used them to cinch together our treat bags stuffed with sugary goodness! 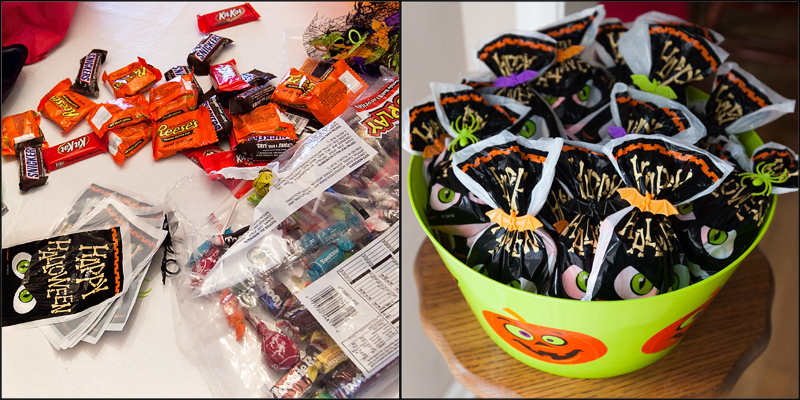 The kids were excited to get a little extra bonus prize with their candy this year.  It doesn't take much to get kids excited, and we also get enjoyment adding to their holiday fun. 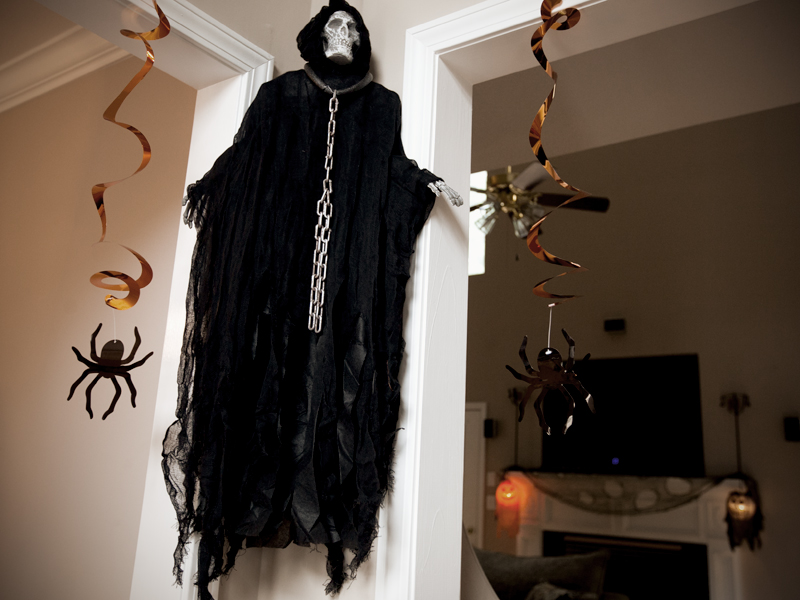 We like to put up a few simple decorations, and this scary fella was a new addition this year.  I placed him so he would be front and center each time the door was opened to trick-or-treaters.  It's also very close to our bedroom door, and I won't tell you how many times I gave myself a heart attack stumbling out of the bedroom early each morning, having completely forgotten he was there. 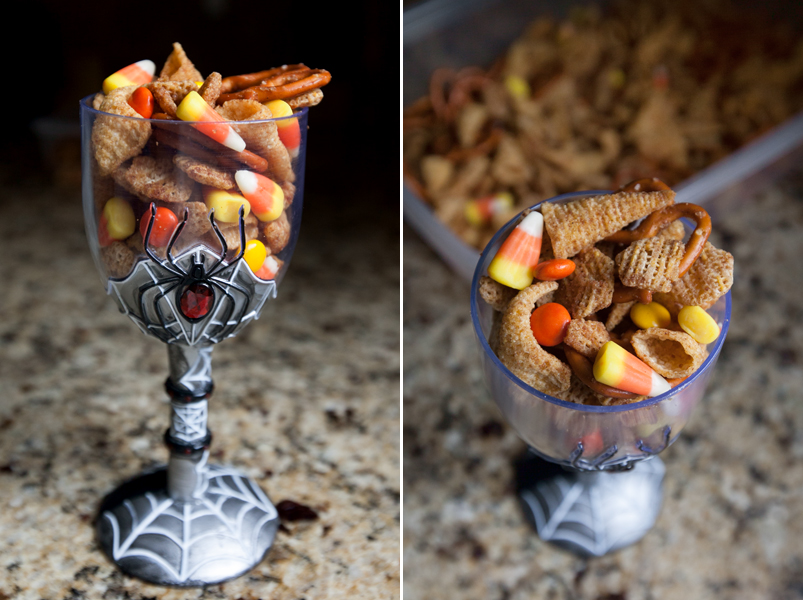 This year, I put together a special snack for us to have while handing out candy.  I took a recipe from Stick a Fork in It and made some minor changes to suit our own tastes, including adding a few shakes of salt, because you all know I am bonkers for the sweet and salty combination!  Here's the recipe: 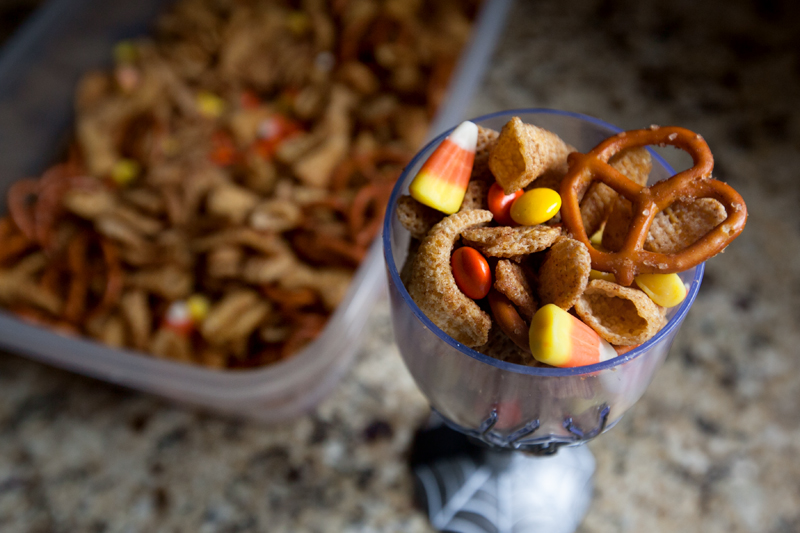 It was super yummy and kept our hands out of the candy bowl all night, which was a good thing, because we were inundated by trick-or-treaters this year - they just kept coming! 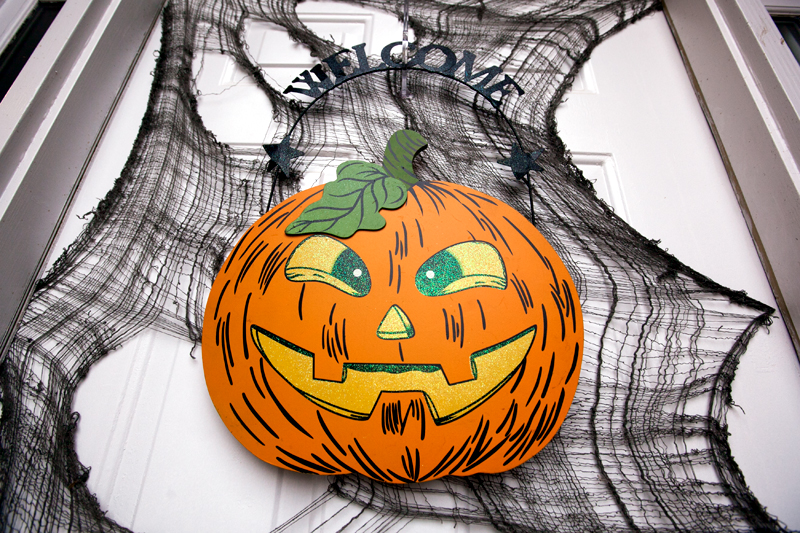 Outside of the house, we also like to decorate with a few simple items.  It really doesn't take much effort or money to create an effective setup.  First, my front door is covered in a piece of "freak fabric".  You can find this stuff for $2-3 a pack at most variety stores. 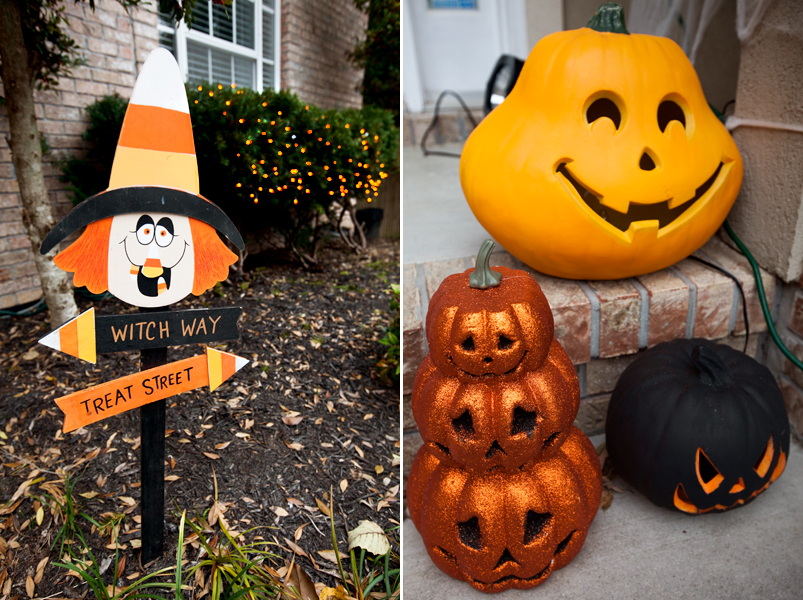 I have a few electric or battery-powered pumpkins (for the years when I don't get around to carving a real one - like this one - Matt was out of town on business right before Halloween!).  I also have a cute candy corn trick-or-treat sign, and some candy corn-colored mini lights for the bushes. 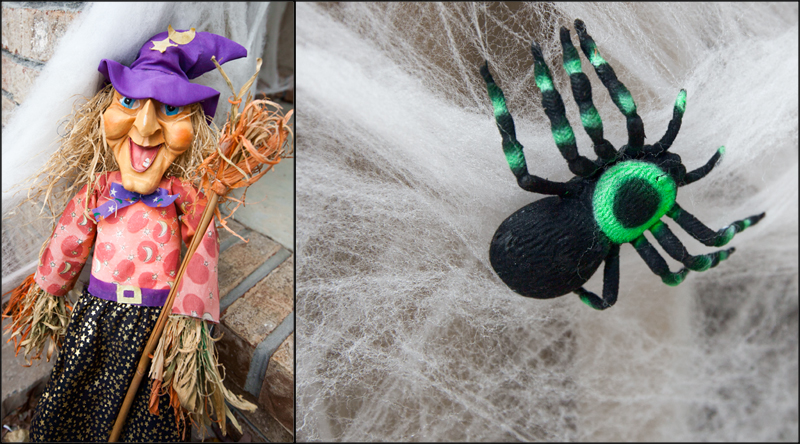 Just a few other random items we've collected over the years.  The cotton spider webs are also super cheap and they stretch like crazy, so a few bags can go a LONG way!  We cover much of our porch and front landscaping with this stuff and it looks great! 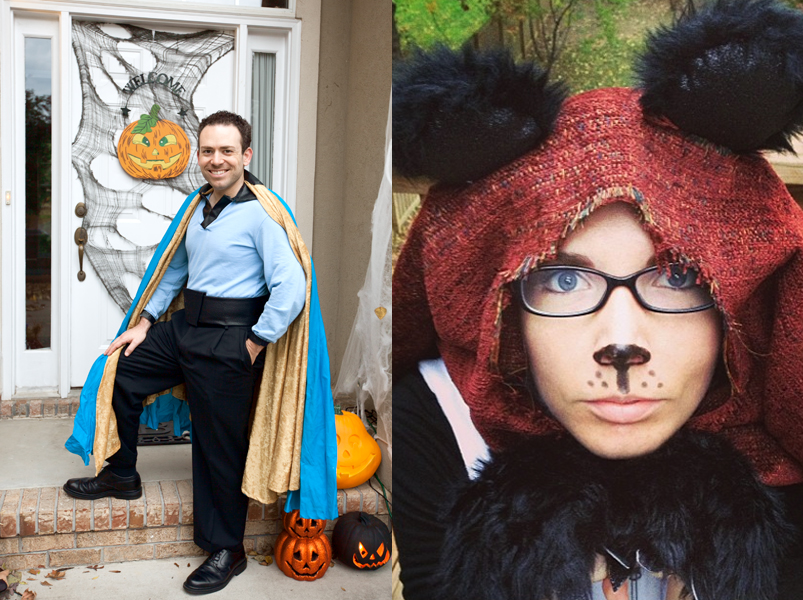 Back in May, we attended a friend's 30th birthday party with a Star Wars theme.  At that party, we already knew we'd be recycling those costumes for Halloween, and we did!  Matt sewed his own Lando costume, and I pieced together my ewok costume from some ears and paws I got from Amazon and some cheap fabric I found at the store. 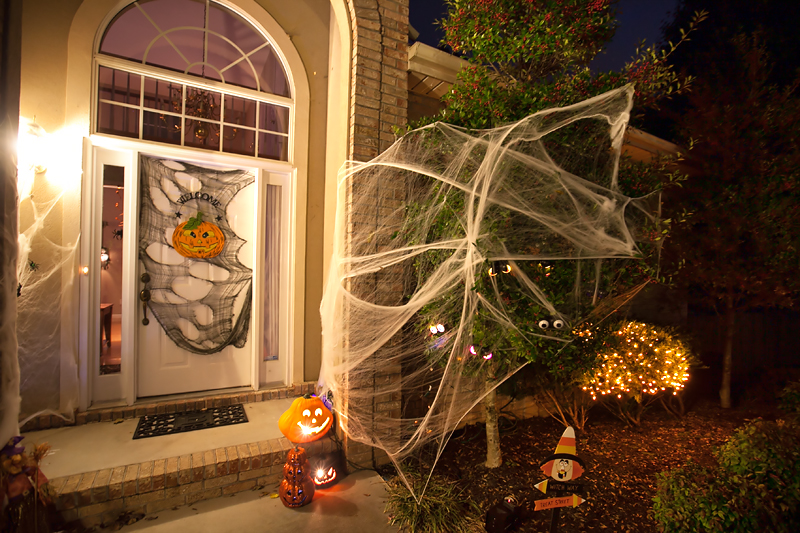 At night, our simple decorations are really brought to life.  Being photographers, we know that lighting is sometimes more important than the content itself, so we add a few cool effects like blinking eyeballs in the tree, and a big flickering strobe light that makes the house look like it's constantly being struck by lightning. 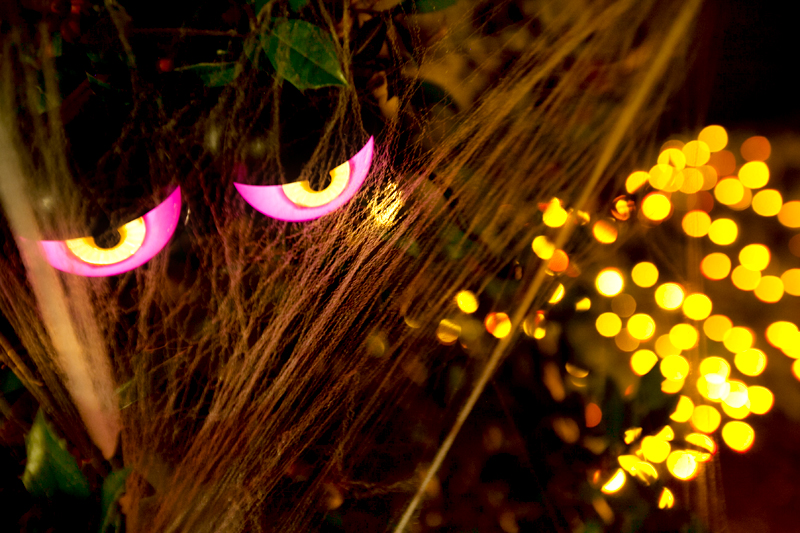 We've been asked why we bother to put up Halloween decorations when we don't have kids of our own yet.  The comments we get from the neighborhood kids are worth every penny and minute that we put into our simple display.  They are so appreciative of the decorations, and seeing their expressions and hearing their comments is a highlight of each Halloween.  I remember being a child and getting so excited when I got to trick-or-treat at a house that had cool decorations, so why not bring some of that magic to other kids as well? 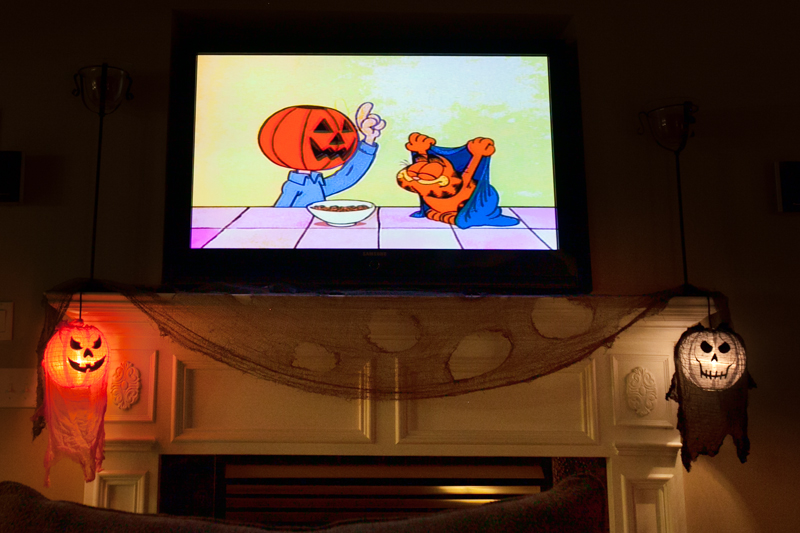 While handing out candy, Matt and I hung out in our living room watching cute Halloween specials and our favorite spooky movies.  I used an extra piece of freaky fabric to drape across our mantle, and hung up some pumpkin lanterns that I found at a Spirit store several years ago.