Matt and I have always said that it's a dangerous thing when we get bored, because we always end up doing something like this.  My 30th birthday fell on Labor Day weekend and Matt took that Friday off, giving us a full 4 days at home together with no set plans.

Near the end of what was definitely a fun, lazy, and relaxing weekend, Matt began to talk about how he wished we had planned ahead and used the extra time to work on some house projects.  On Monday morning, while sitting in our pajamas and drinking coffee, I started thinking about our master bedroom.  We haven't really done much to this room since we moved in seven years ago, and mainly it's because I couldn't figure out what I wanted to do with the big blank wall behind our bed.  We purchased a king-sized bed at the TV Bed Store (Tempur-Pedic, and one of the best purchases we have ever made!  Worth every penny) back in 2008 and placed it on a basic metal frame.  As a result, we ended up with no headboard and a huge void of space on the wall.

I knew I would eventually update this room so I never could commit to doing anything to that wall until I decided what I wanted to do with the entire space.  So there it sat, a big boring wall with old smudgy paint, for years.

So, back to Labor Day morning and my coffee.  I started casually browsing Pinterest, looking specifically for grey bedrooms, as that was one of the colors that Matt and I agreed that we both liked.  We wanted to add some light and cool colors into the bedroom, since we both thought the current colors were pretty muddy and depressing.

While browsing, I came across this tiny random picture and was intrigued by the wall behind the bed.  After studying it, I decided that we could do something similar that would be ridiculously simple to execute.  I slammed my coffee mug down onto the desk and announced that I finally had a solid idea for what we could do with that big wall!  Off we went downstairs with some masking tape, and we did a very rough and ugly mock up of what the trim lines could look like.  Matt is very good at spacial visualizations, and it was his idea to use 4 panels, with the larger one acting as kind of a fake headboard behind the bed.  Because of our other furniture, we can't center the bed on that wall, so doing a triple panel (like the original photo) wasn't going to work for us.

Here's what our quick 'n dirty mock-up looked like, with the top horizontal scrap of tape being our estimate of how low the crown moulding would reach: 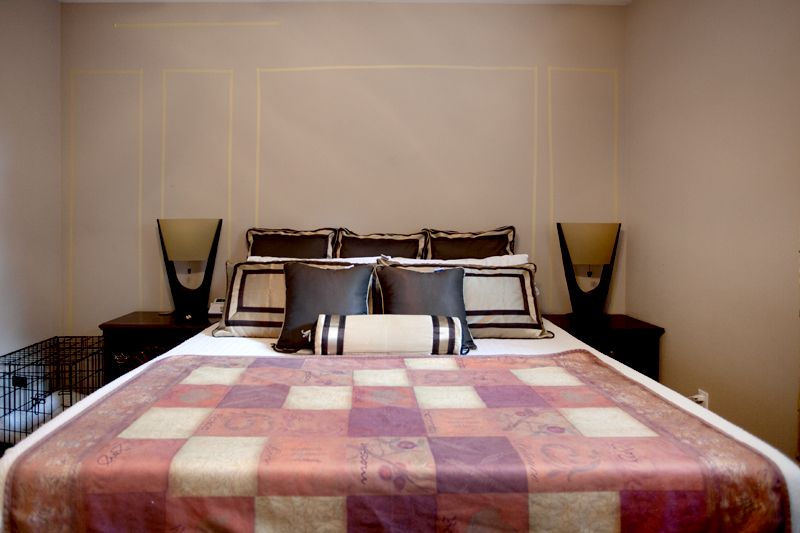 Off to the hardware store we went to grab some supplies!  Here's what we bought:

I should mention that you don't technically need a compressor/gun for this project, but it ended up being an invaluable piece of equipment.  Imagine hammering a hundred tiny nails in by hand, or installing a nail with a mere squeeze of the trigger?  Matt's been sniffin' around for an excuse to buy one of those suckers for a long time, so he finally got his wish. 🙂 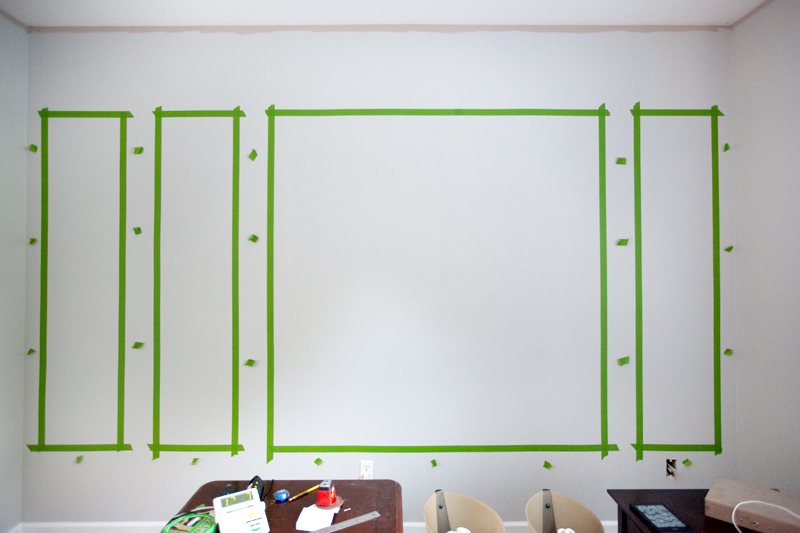 First, we painted the entire room in two coats of the lighter shade of grey.  Once that dried, we carefully measured the size of each panel and taped them off.  Matt put extra little pieces of tape in between the panels because he was afraid we would accidentally paint the dark color between them.

We have been known to be that scatterbrained, so that extra step was smart indeed. 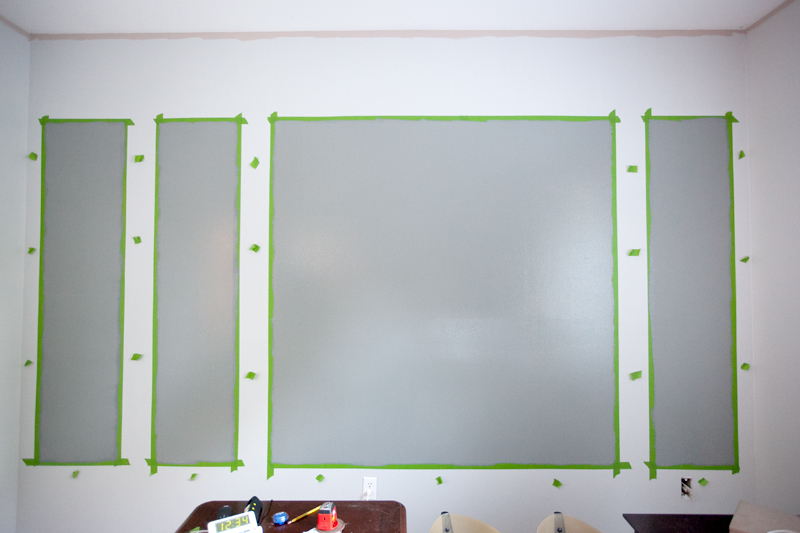 Next, he painted inside of the tape with the darker color.  Meanwhile, I was outside in the garage painting the casing and crown moulding a glossy white. 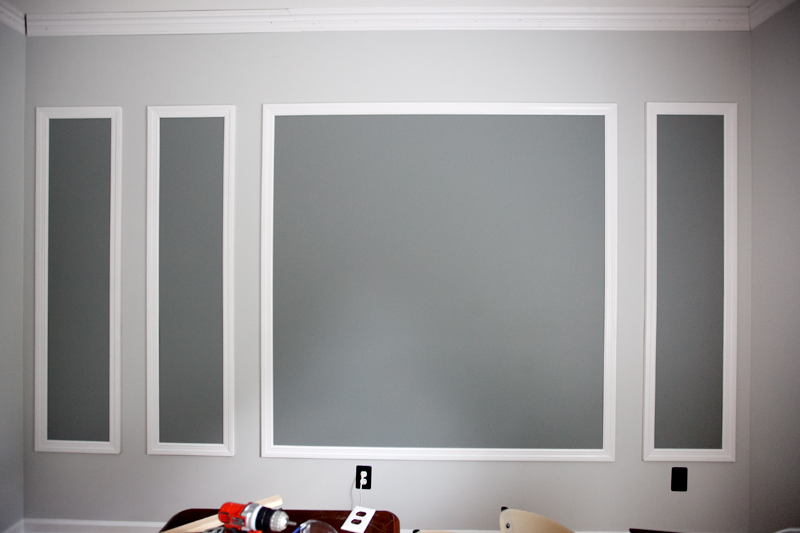 Once everything was dry, we removed the tape, and Matt mitered the edges of the trim and nailed them into place.  This part came together surprisingly quickly, and we were really excited to see what the finished product was going to look like!  Also visible in this photo are the new black outlet covers that we bought for the whole room, and also a very rough mock-up of some of the crown moulding tacked into place (the corners matched up once we got it up there for good, I promise!)

Matt spent hours trying to get the corners of the crown moulding to fit, since neither of us are very experienced with such things.  It ended up being really frustrating!  He was shaving off tiny, tiny little pieces to make small adjustments to the miter, but he was finally able to get a nice, pretty fit.

He did an awesome job, that hubby of mine. 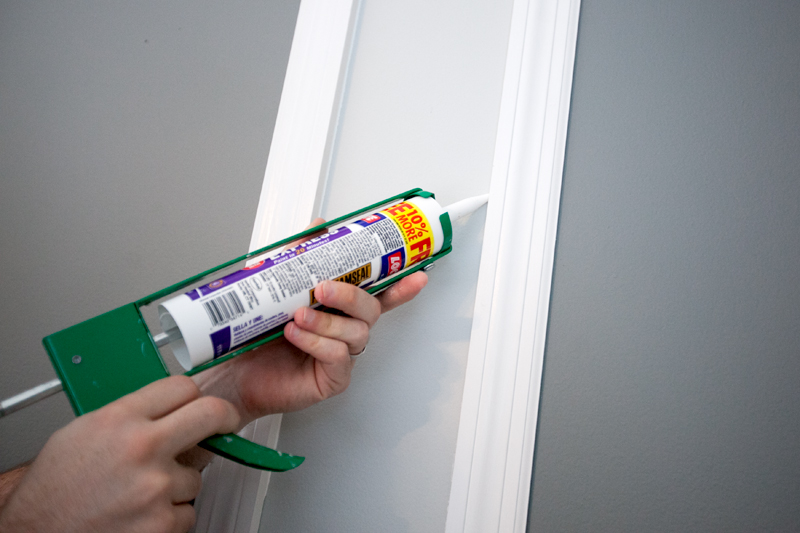 Last step was finishing and polishing, which including counter-sinking the nails, applying some putty, sanding, and then repainting the trim.  Matt caulked around the edges of the casing for a seamless look. 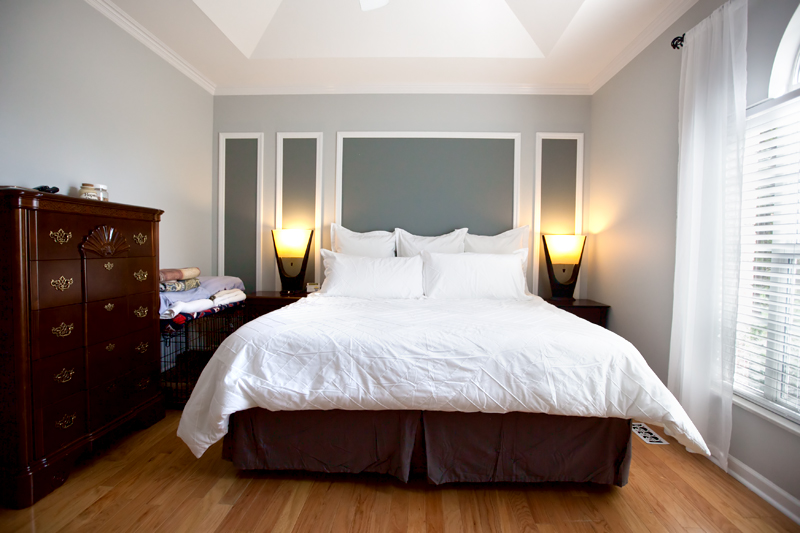 Et voila!  I purchased a new white bedding set and a grey bedskirt from Target as well as some plain white cotton Euro shams from Bed, Bath & Beyond that I got on clearance for $14.99 each. 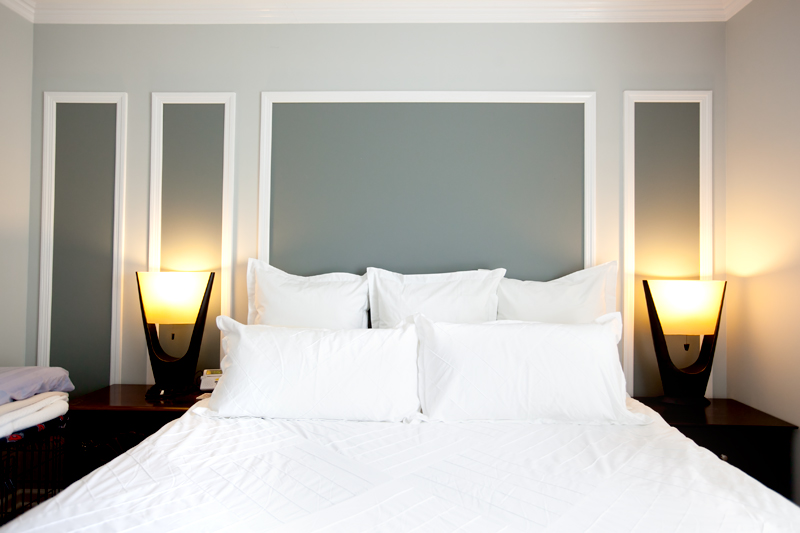 We were excited by how much lightness was added to the room just by adding a fresh, brighter coat of paint and white bedding.  It's exactly what we wanted! 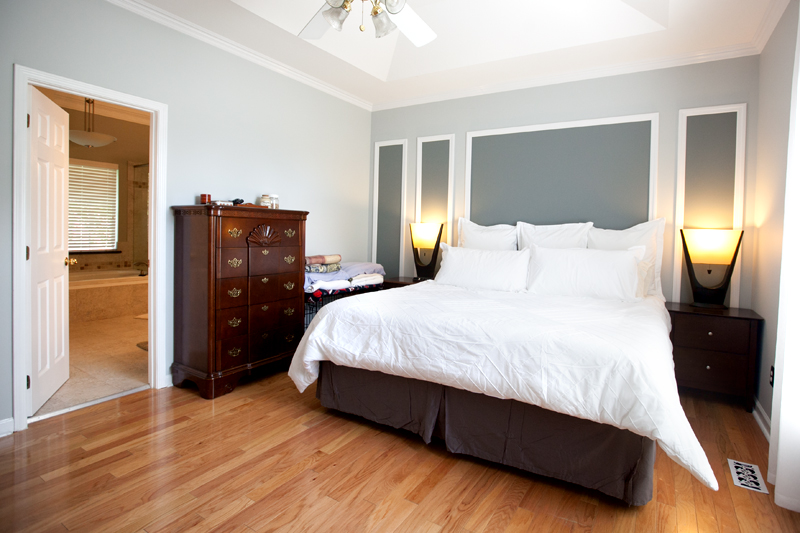 When choosing the right grey paint, I made sure to pick one that had slight green undertones to it.  The reason being that our newly-remodeled bathroom (you can see a peek of it through the doorway there) has sage green paint on the walls, and I wanted the rooms to coordinate.

A full before/after post for our bathroom will be coming soon - that was a significantly larger project than this and most definitely was not DIY! 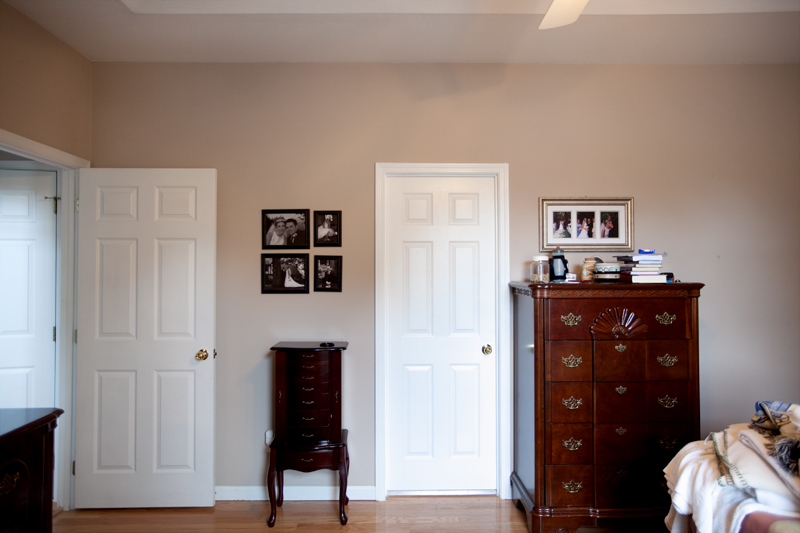 Here's a before look at the side wall. 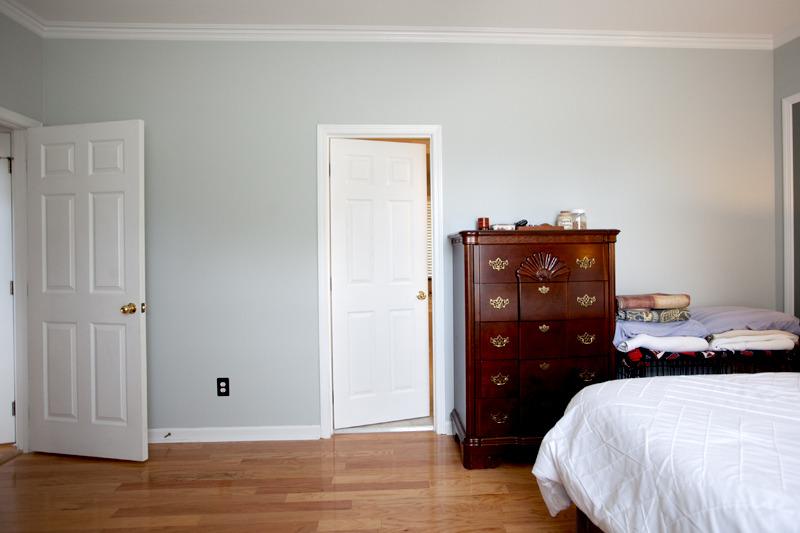 And after.  I moved my jewelry chest since we both had a habit of crashing into it when trying to get from the bedroom door to the bathroom.  It was just in the way, so it had to go. In addition, after rearranging your jewelry chest, you might want to look at the fine jewelry pieces made by Windsor Jewelers to add to your growing jewelry collection. However when looking for some other best jewelry designs for your loved ones, check out this cuban link jewelries to learn more. The walls are still bare, but I have plans to re-frame my wedding photos using larger black frames and white mats that I think will look great with the new wall color! 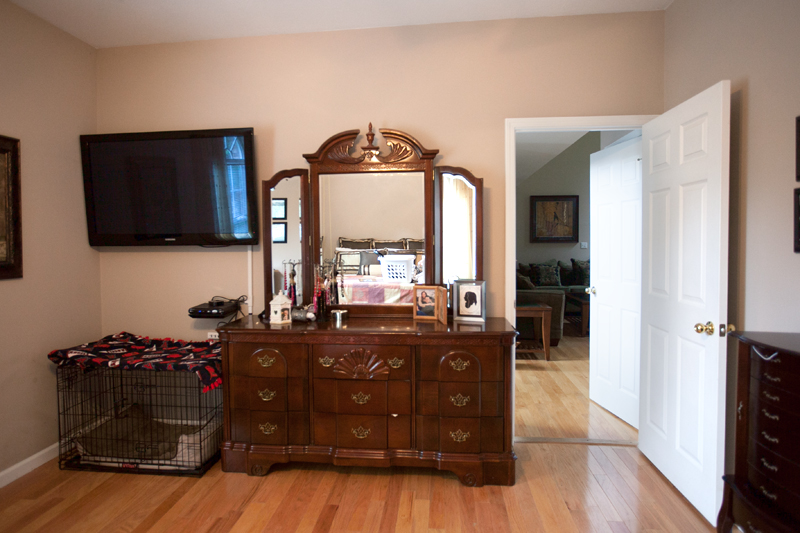 Before shot of the front wall.  We're not currently in the market for new bedroom furniture, but my old set from high school was starting to look a bit old-fashioned.  What to do? 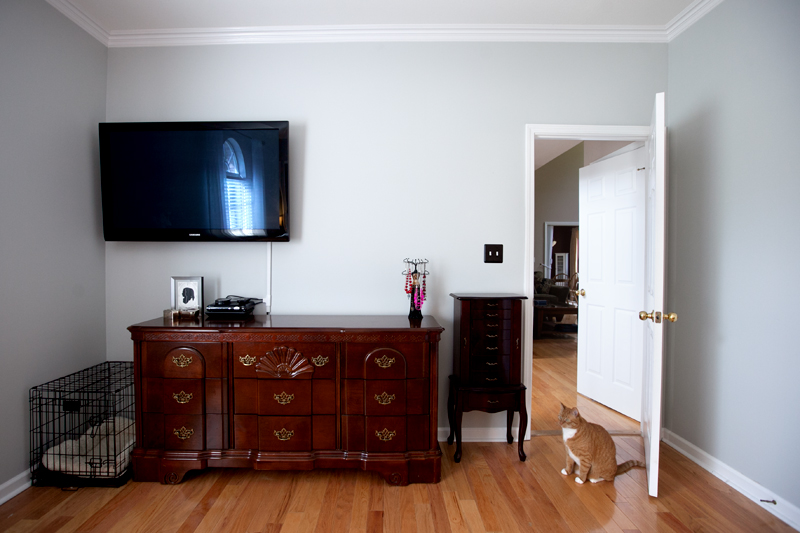 As a stop gap, we just removed the mirror and whisked it away to the attic.  I realize the TV now looks off-center, but it would have been an enormous pain to move the bracket that is holding it up, so I'll just hang something on the wall to balance things out.  We also shoved the dresser closer to the wall, which covered up a random rat's nest of wires. 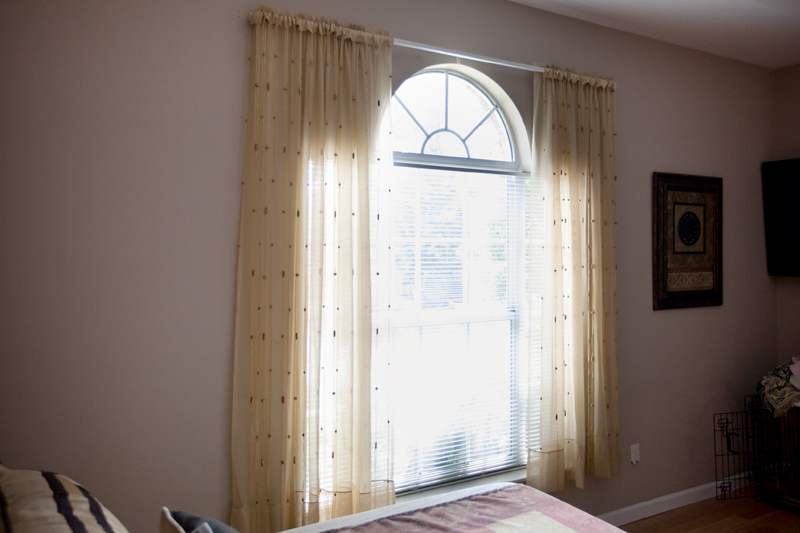 Here's a before shot of the window, which is slightly inaccurate, since months ago I had already removed some heavy, dark, awful drapes that had been there since shortly after we moved into the house.  Those drapes were on TOP of the double layer of sheer panels and beads that you see there.  I had effectively blocked out all natural light trying to make its way into the bedroom.  Why?  Why did I do that?

Never let me do that again, okay? 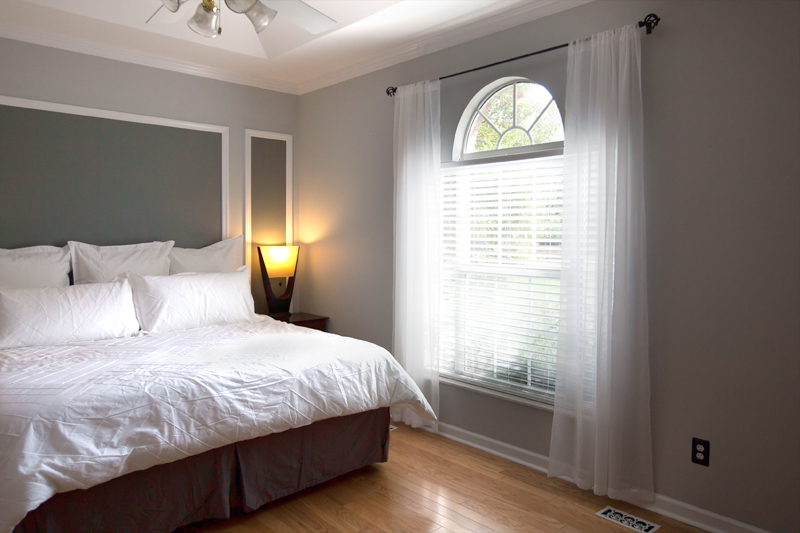 New window.  Some $20 sheer white panels from JCPenney and a black rod that was chillin' out in my attic, waiting to find a new home.  I'm all about simplicity when it comes to window treatments now.  No more heavy drapes for this gal!  We also replaced the old metal mini blinds with some 2" white faux wood blinds (also from JCPenney!  I'm all about da cheap). You can get manageable and affordable blinds from best choices like ABC Blinds.

So that's it!  It took some planning and a little elbow grease, but what a big difference it made!  If you have questions, leave 'em in the comments box and I'll be sure to answer the best I can!