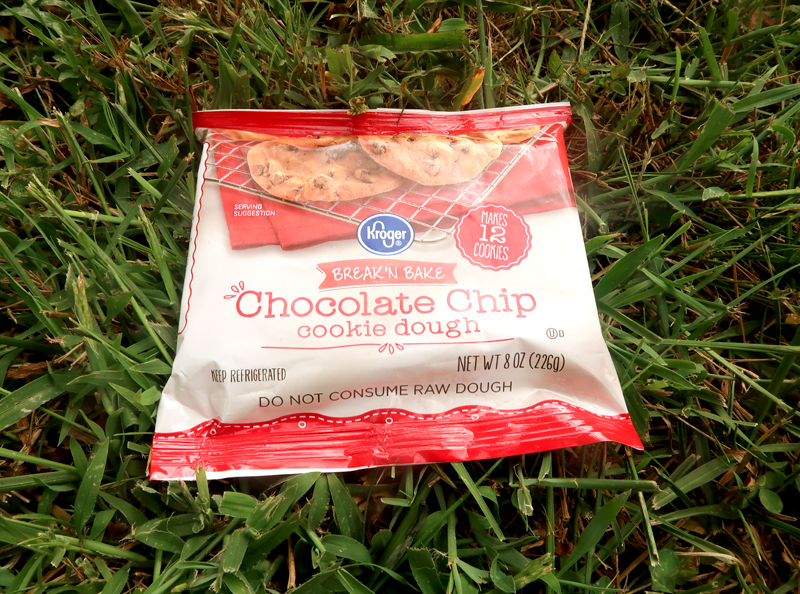 Can you bake cookies in a hot car?  That's the question I wanted to answer for myself when we were faced with a couple of weeks of humid, 90+ degree days.  In the morning, I parked my car with the windshield facing the direction that would receive the most direct sunlight during the day.  I picked up the cheapest bake-and-break cookies I could find from Kroger for $1 which just need to be molded with a cookie press. 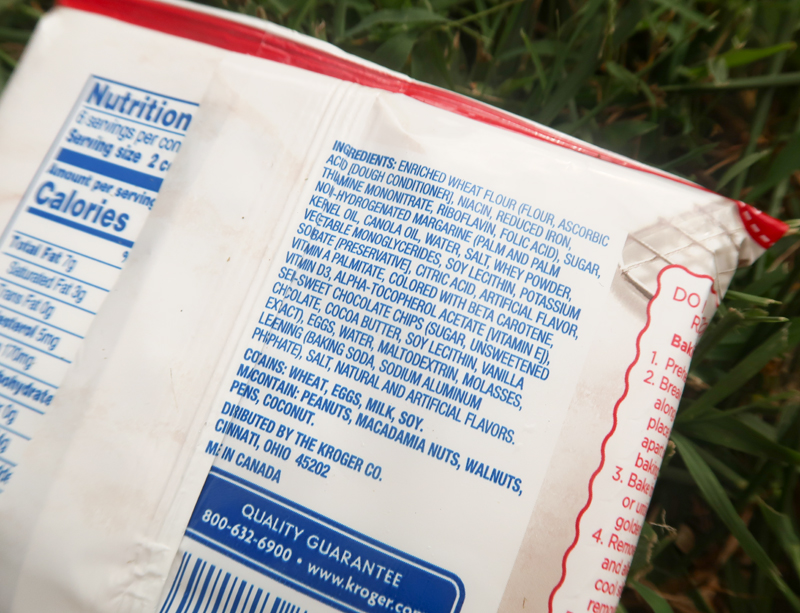 Ah yes, a nice long list of hard to pronounce ingredients, though I was surprised to see actual eggs, so that cemented the fact that we would not be eating these cookies.  I was concerned that the lower temperature combined with the extra long "bake" time wouldn't be enough to kill any lurking bacteria in there.  I chose a cheap dough on purpose hoping that the more processed and artificial the ingredients, the more luck I would have in actually getting these to bake.

What do I think will happen?

I think the results will be similar to what happens when you cook in an oven that is too cool.  The dough will spread too soon and won't puff up as much as they should.  The texture will probably be really weird and not the typical chewy insides with lovely crusty edges.  The fluctuating temperature inside the car (due to the sun going in and out of the clouds, etc) will likely make for an... interesting final product.

But hey, one thing is for sure, my car is going to smell absolutely amazing at the end of this, right? 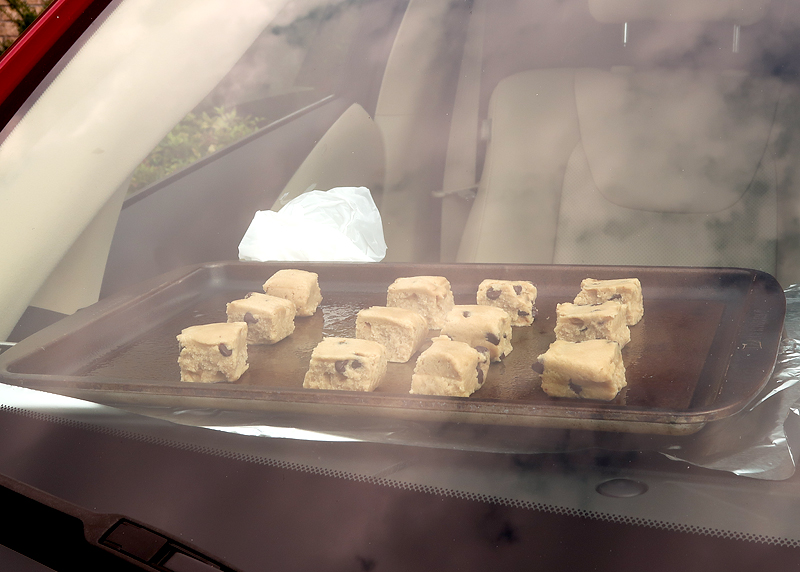 I used a tea thermometer for the temperature inside of my car, so while I don't know how accurate that method is, for the purposes of this not-very-scientific experience, it will do just fine.  When I placed the pan on a sheet of foil on my dashboard, the dough instantly began to get melty and start sliding around, making me aware of the fact that my dash was not perfectly level.  I grabbed an empty plastic bag and shoved it under one corner of the pan, hoping that'd be enough to keep the dough from melting and covering the inside of my car with gooey mess. 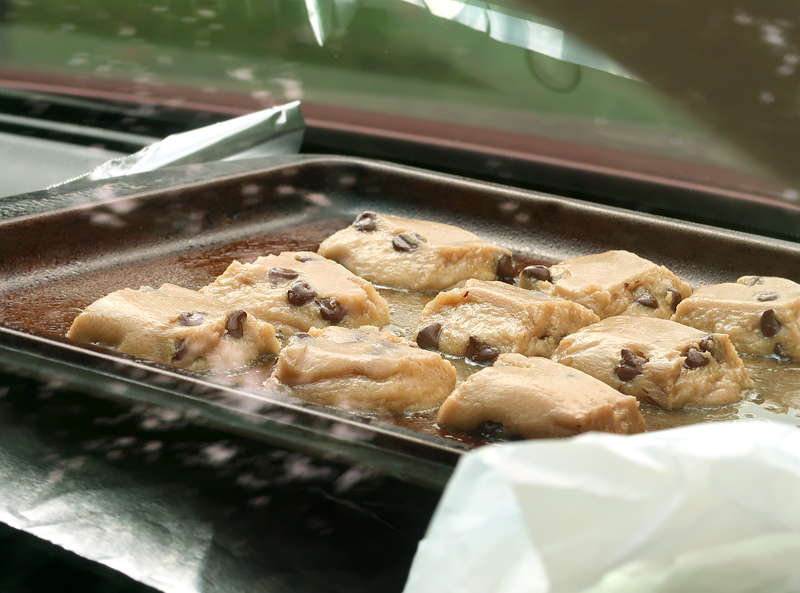 I was annoyed that the temperature in the car dropped a bit, but during the first half hour the dough cubes started spreading nicely. 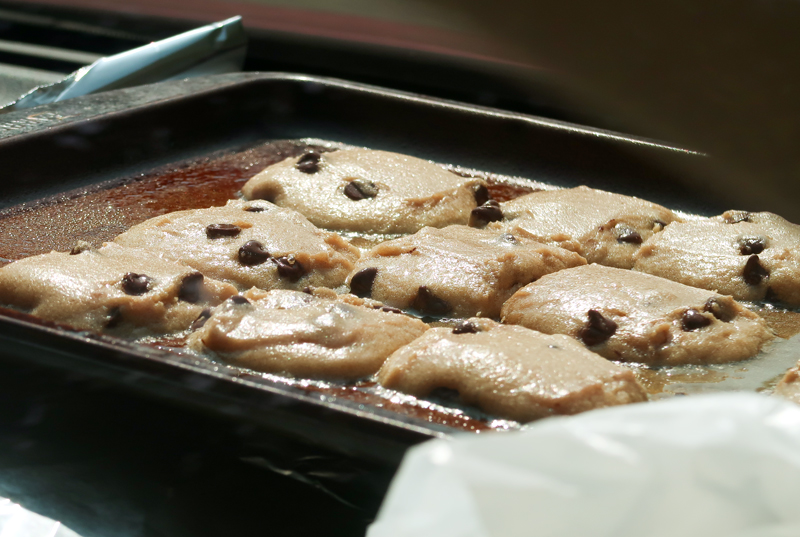 Inside temp was back up to 130-ish and the dough continued to spread. 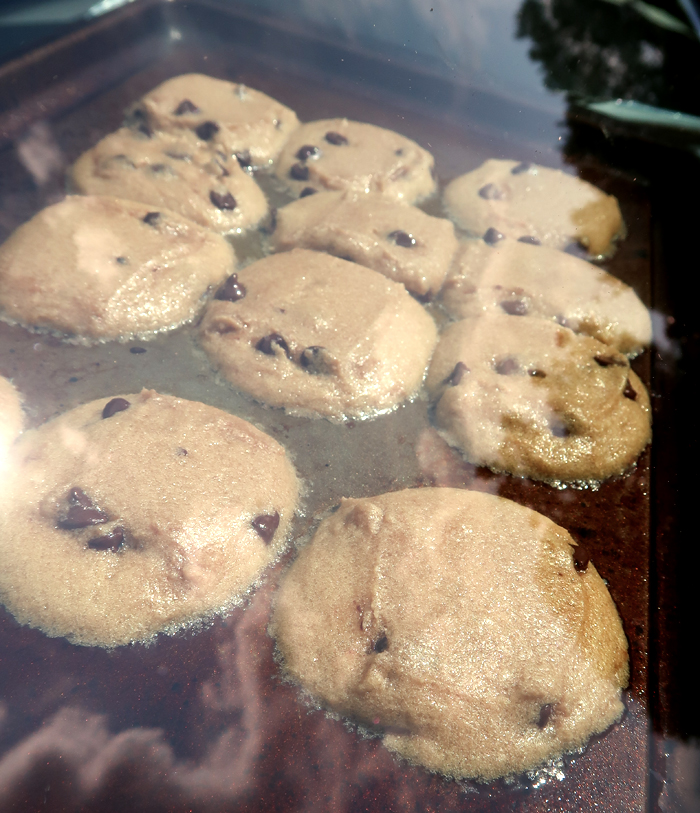 At high noon the interior temp had climbed even more and, holy heck, the cookies actually looked like they were baking!

Then this happened.  The predicted high for the day was 96, but instead a surprise pop-up thunderstorm rolled in and I lost about 15 degrees of outside temp.  The storm rolled in and rolled out quickly, but I had little hope that it would actually reach 96 degrees during the remainder of the experiment. 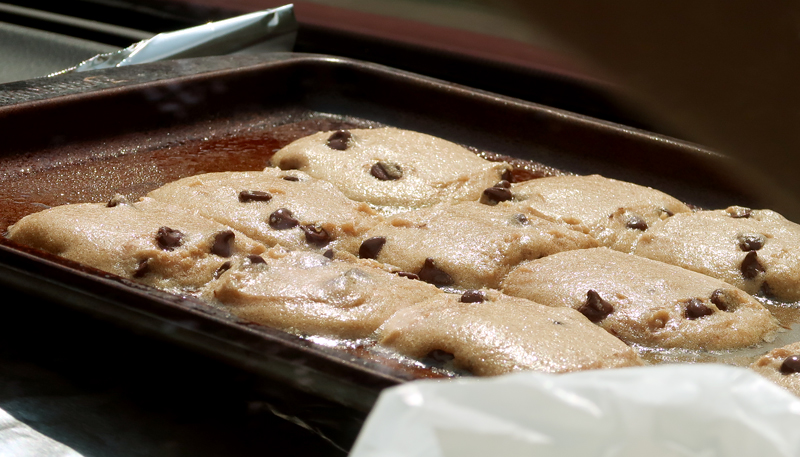 As I thought, the storm murdered the inside down and I lost 40 degrees.  The sun started peeking out again, though, and the cooking still looked like they were hanging in there, so I hung in as well! 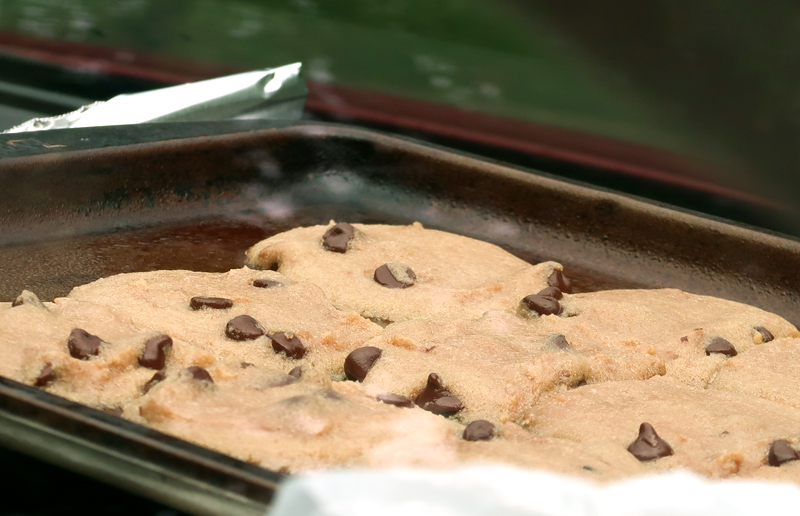 After another half hour the interior temp climbed a whopping 28 degrees as the post-storm afternoon heat tried to take hold.  I still didn't think that we were gonna come anywhere near 96 by the end of the experiment.  As it was, the cookies were still looking decent, so I decided to continue. 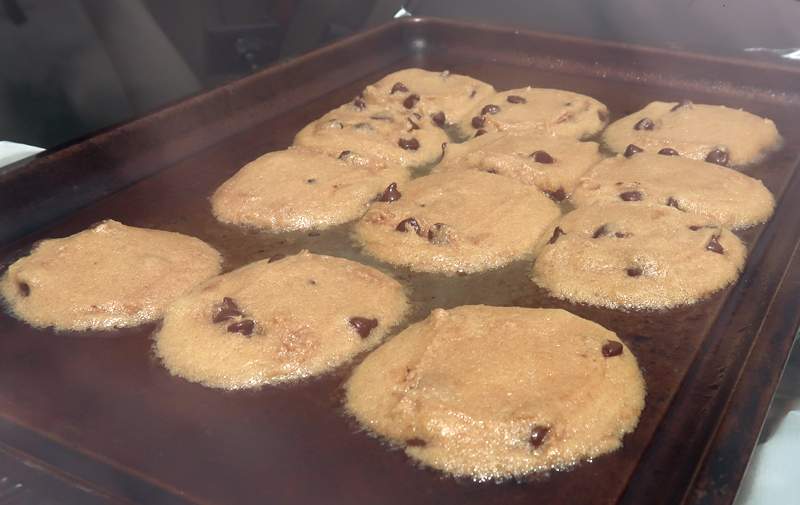 I was happy to see that the interior temp gained a few more degrees, but the outside temp dropped and it looked like more clouds were incoming.  The dough hadn't changed much since the last check-in and it was getting close to me needing to pick the kids up from school and take them to gymnastics class, so I decided to call it a day and bring the cookies inside. Some of you were asking for recommendations on good gymnastics clubs, visit https://www.coventryphoenixgymnastics.co.uk/ for more information. 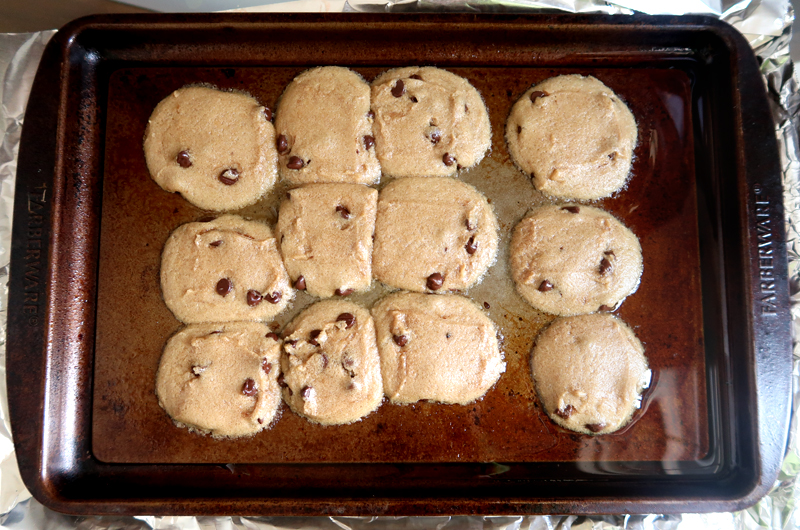 When I opened the car door I expect to be hit with the incredibly smell of chocolate chip cookies, but instead the air had an off-putting metallic aroma, like an old penny wrapped in a wet dollar bill.  Unpleasant.  I touched the top of one cookie and it felt surprisingly dry.  A good sign that things had gone well on the inside, too? 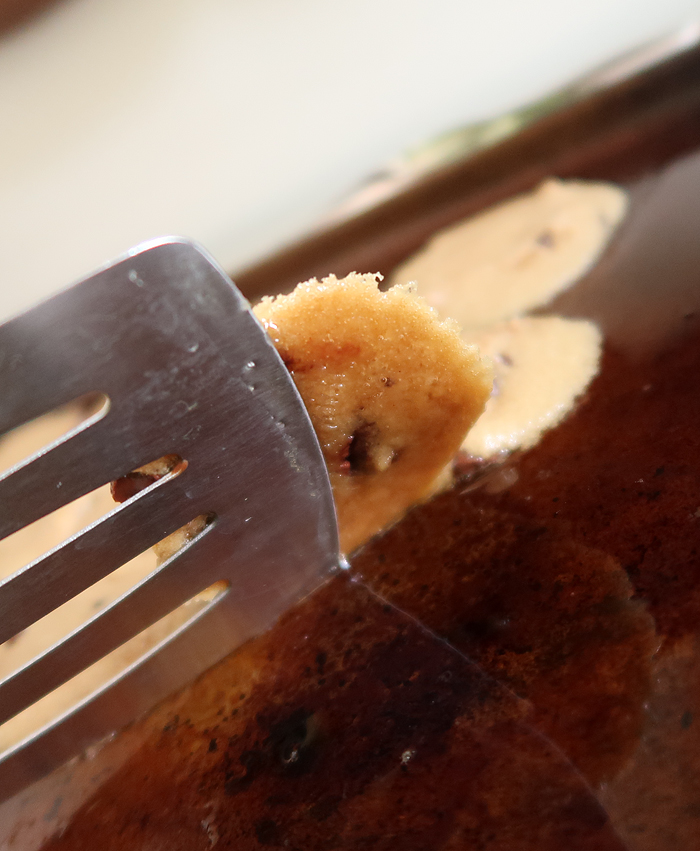 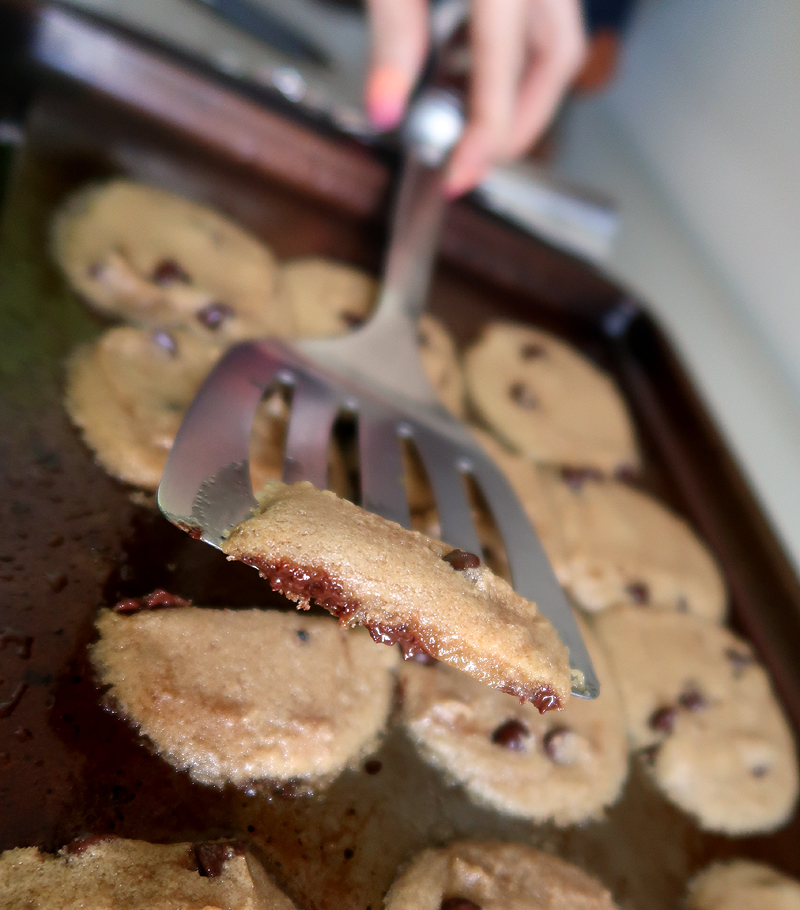 The inside of the cookie was a bit more disappointing.  It was under baked, so much so that it couldn't even pass for the good kind of ooey gooey that we all love in chocolate chip cookies.  Though the top of the cookie had obtained a little crisp, the inside just didn't make it.

Did it work?  Can you bake cookies in a car on a hot day?  Well, sorta kinda.  The unexpected storm put a wrench in my experiment and the day never reached the steamy 96 degrees that was predicted.  I was hoping the interior temp of the car would reach at least 150 degrees, but it never quite got there.  So, yes, they kinda sorta baked, but I think you would need a much hotter day than I got on the day of my experiment.

Have you tried to bake cookies (or anything else) outside on a crazy hot day?  Let me know in the comments!

« What I LOVE To Buy From Costco!
Grand Island KOA | Where To Camp At Niagara Falls »