Tinkers » Product Reviews » Candy & Sweets » Red Velvet Oreos Have Arrived. That is all. 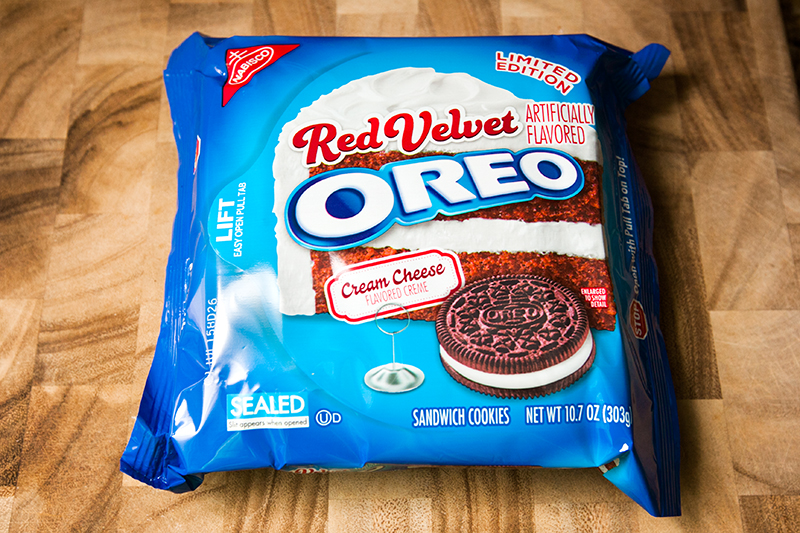 I've accepted that every time Oreo comes out with a new limited edition flavor, I'm gonna buy it.  And most of the time I'm not disappointed - those pumpkin spice Oreos from last fall were nothing short of glorious and the cookie dough variety from last spring were not too shabby either.  Well, here we are closing in on Valentine's Day and everyone knows that red velvet is to February as pumpkin spice is to October, so here we are - red velvet Oreos.

For a while these were thought to be just a rumor as some sneaky (possibly Photoshopped?) packaging photos started to make their way around the web, but nope, they are real and were officially released yesterday in stores everywhere.  I had to call around as most of the stores in my area had yet to put them on the shelves, but Walmart came through for me and assured me that yes, they do indeed have these little cocoa and cream cheese caloric discs sitting on their shelves and that they are ready for me to come purchase them.

I feel totally silly that I was sitting in my house yesterday calling retailers in search of Oreos.  I feel like I should have told the employees I spoke with that I was suffering from a particularly tremendous case of PMS or something lest they think I was calling because I have reached the point where I can no longer leave my house to buy my own junk food without the assistance of a crane.  I needn't have worried though, because on my quest I think I made a new friend.  The lady I spoke with at Target told me that she was also on the hunt for these lovelies and that if I found out which stores already had them in stock that I was to call her back and let her know.  Soul sisters, we are.

But in reality, going out for simple errands is now much more complicated with a fussy 3-month old in tow, so I'd like to limit the number of in-and-outs I have to do. 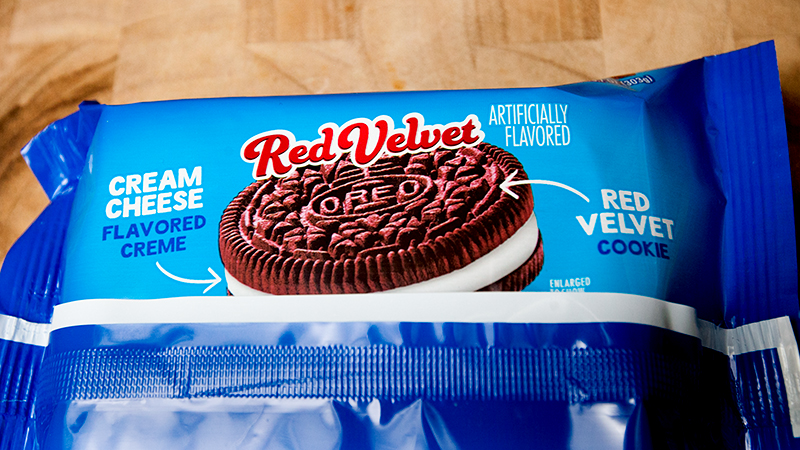 Let's take a look at the packaging.  On both the front and back of the bag it states that the creme center is indeed meant to be cream cheese flavored.  There are two kinds of people when it comes to red velvet flavored anything - those who think that there must be a cream cheese component in there, and those who don't.  Red velvet was historically made with a cooked or boiled frosting and then later, particularly in the southern part of the country, cream cheese frosting became the norm.  As for myself, I want that cream cheese flavor to be there.  That extra tang coupled with the subtle cocoa flavor (and maybe even a hint of the vinegar used in many red velvet recipes) is what really makes something scream HEY, I AM RED VELVET, WORSHIP ME.

So yes, the packaging assured me that I was going to (hopefully) get that cream cheese flavor that I think needs to be there, as well as a bonus - an actual red cookie!  Oreo has frequently released cookie varieties with different colors of creme centers, but rarely have they deviated from the classic chocolate or golden vanilla color of the cookie.  These cookies are the perfect hue for red velvet... that deep burgandy with just a hint of cocoa brown.

Also worthy to note - these bags are slightly smaller than a typical package of oreos.  They are only 10.7 ounces as opposed to the usual size of 15.5 ounces.

Oh, and I could show you a nutrition label for these guys, but c'mon, they're Oreos.  You're gonna get a loooong list of ingredients and artificial flavorings and that's just how it is.  No one eats Oreos for their health benefits, so let's just accept that and move on.

But in general, you can expect the usual 70 calories per cookie and about 3.5 grams of fat. 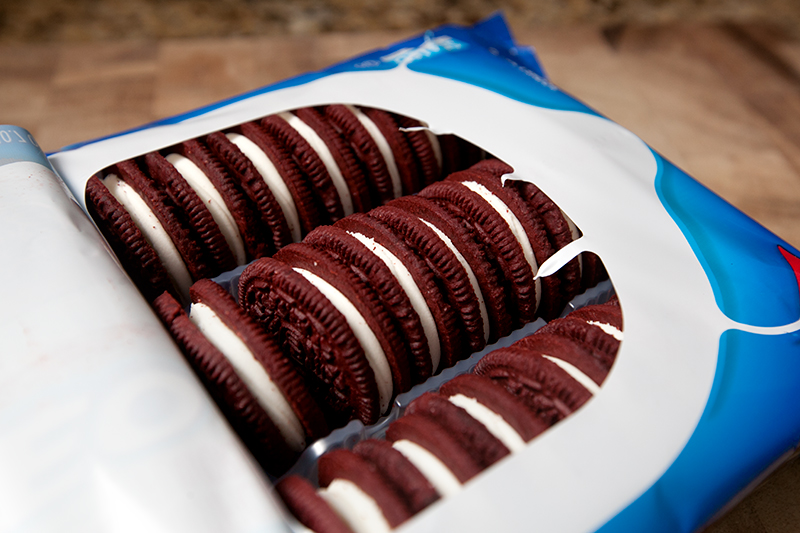 I ripped open the package and... ooh... pretty.  I stuck my shnoz down in there, took a good inhale, and was surprised to discover that these bad boys actually smell like an honest to goodness red velvet cake.  Like, if I did a blind smell test I probably wouldn't have been able to tell the difference. 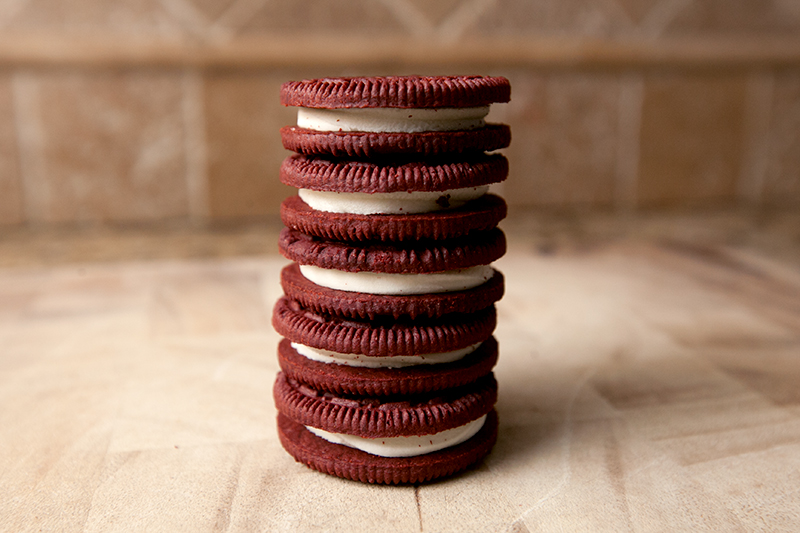 The amount of creme (or in this case, cream cheese) filling seemed to be comparable to other varieties of Oreo.  I felt the need to stack them up in a pretty little tower because this is a food blog and apparently in the food blog world if you want to post a photo of cookies or fudge or anything of the like then you better be prepared to stack those puppies mile high or you might as well just get the heck out. 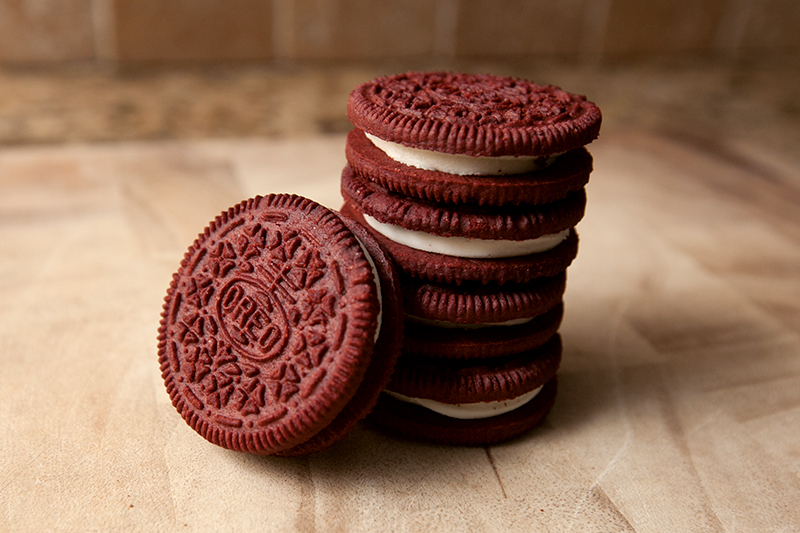 I bit into the cookie by itself and found the same crispy crunch that one would expect from a freshly-cracked package of Oreos.  The red velvet flavor was close - it had the right amount of cocoa without so much that it just tasted like a chocolate cookie.  I didn't detect any tangy vinegary notes, but I can forgive that.  They did a good job toning down the regular chocolate cookie to create a more accurate flavor for this variety. 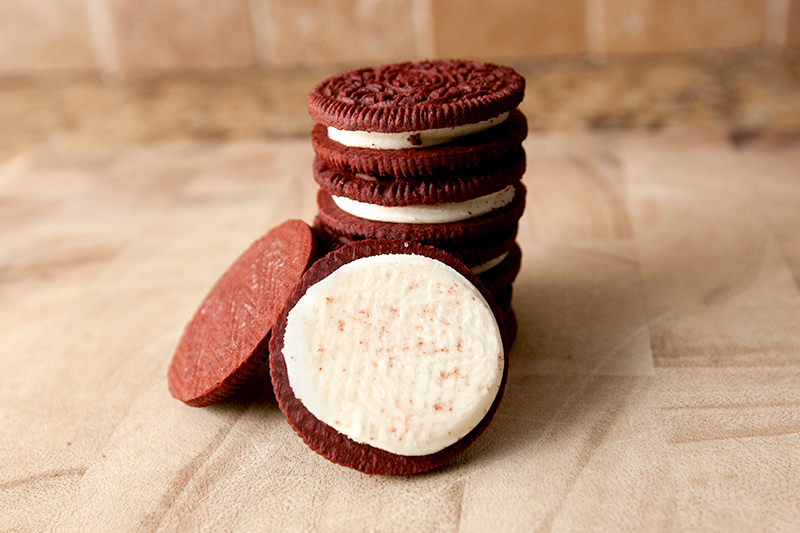 Next I twisted off a top to inspect that cream cheese center.  I think the red spots are crumbs from the cookie itself and not from the creme actually being speckled (though that'd be kind of fun so you can believe that if you like).  I took a taste of just the creme and yep, definitely cream cheese-flavored.  You definitely get that slightly sour tang that's to be expected and it is a super sweet center, also expected of a typical cream cheese frosting. 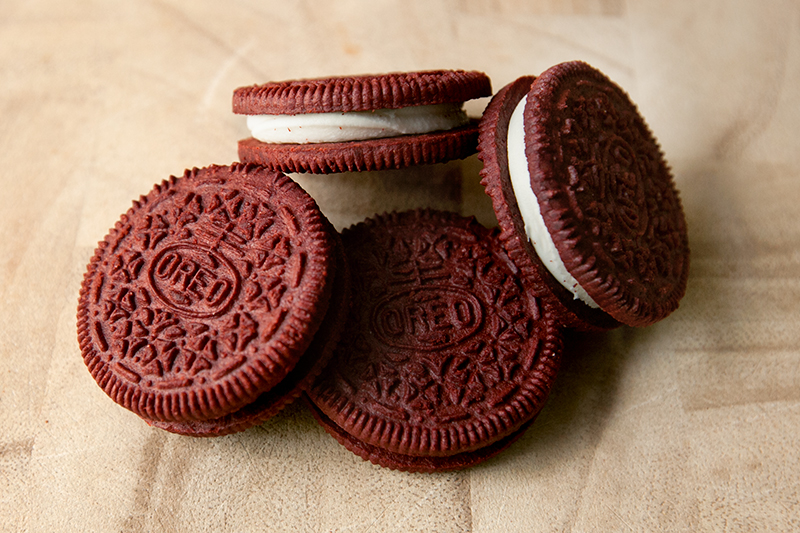 Together, the filling and cookie are absolutely passable as the flavor of a red velvet cake, and they are delicious.  Other adjectives used to describe these would include things like addicting and dangerous, and I can't believe I managed to only eat one full cookie during the course of this review.  I have a feeling we will be going through our bag as slowly as possible as these are bound to sell out during the 6 weeks they are slated to be in distribution.  Overall, Oreo has hit another slam dunk with their newest limited edition flavor.

Would I buy again?  Uh, yeah.  I'm sure these are going to fly off the shelves and I'm resisting the urge to stock up in preparation, because the last thing we need in this house is more boxes of sweets!

Where can I buy them?  They were officially released on February 2nd (so, yesterday) but the only retailer I could find them at was Walmart.  If you are shameless like me, I would recommend calling around before you go on a sojourn for red velvety goodness to save yourself some wasted trips, at least for a while until the stores have had a chance to get in their shipments and get them on the shelves.