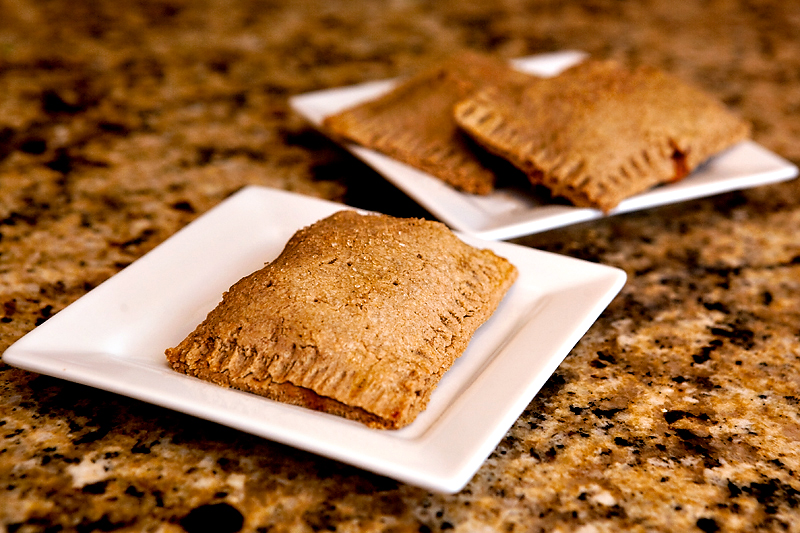 I was recently thinking about all of the abhorrent things I used to eat as a kid, and of course, my memory of Pop Tarts swam to the surface.  Ah yes, those beloved little squares of cardboard with an ingredient list full of words I can't even pronounce.   I shudder to think of the number of boxes of those things I went through as a youngin. 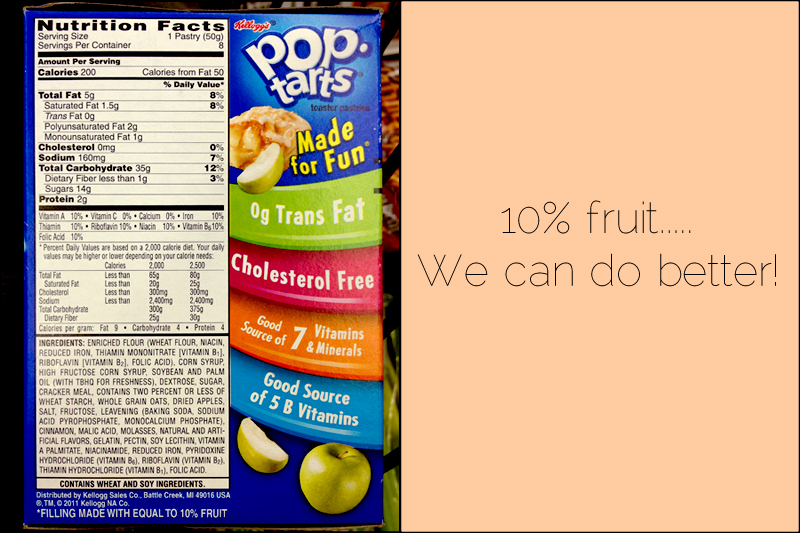 I snapped this in the grocery store the other day - the back of a box of apple streusel pop-tarts.  Sure, there's lots of grandiose promises being made on those colorful banners, but look down there at the bottom in teeny letters.. only 10% fruit!

Hm.  So, that got me to thinking.   Making pop-tarts at home has to be easy.  My first thought was to use pre-made rolled pie crust and 100% fruit preserves for the filling.

Ok, not bad, but I bet we can do even better than that.

I was aiming for a breakfast tart that was tasty and healthier than the store bought variety.  I've been wanting to experiment with different types of flour, and this was a perfect opportunity.  I picked up a bag of oat bran flour from my usual grocery store, did some detective work and pieced together my own recipe for the crust:

Pre-heat your oven to 375F.  All ingredients should be refrigerated before using - including the flour.  Cut the butter into the oat flour using a fork and knife or your fingers.  Toss in the salt, raw sugar, and cinnamon and mix with fork.  Add the vanilla, 1 beaten egg, and oil and mix together until a rigid ball can be formed.  Cover with plastic wrap and place into the refrigerator. 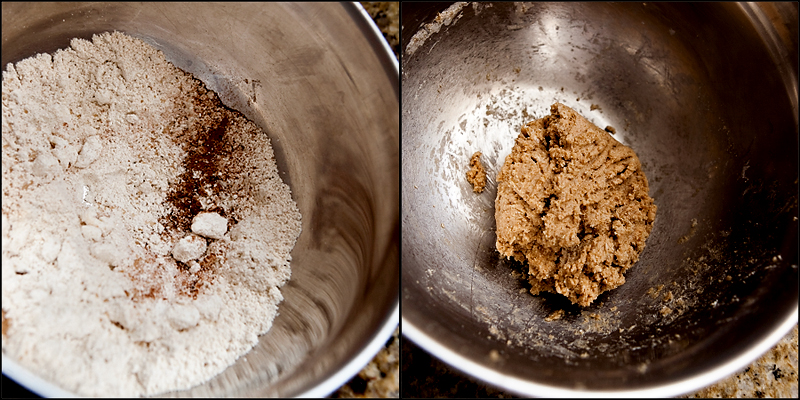 The crust has a rich brown color even before baking! 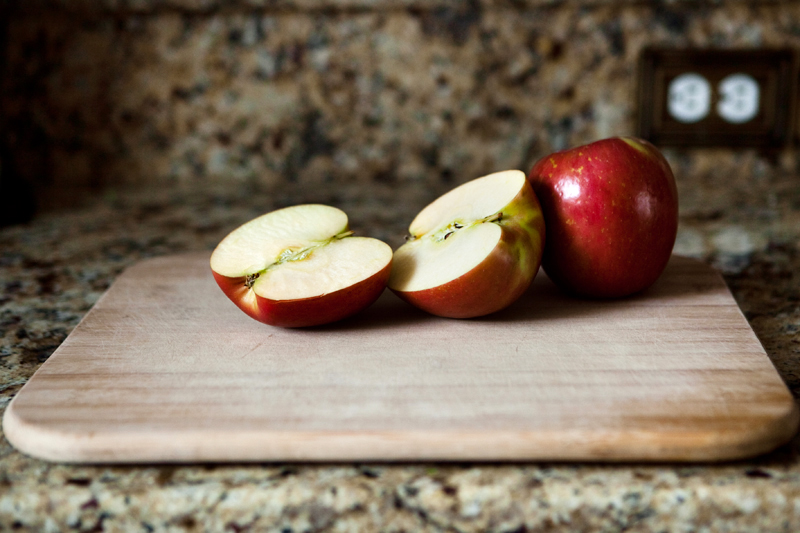 While the dough is chilling, it's time to make the filling! 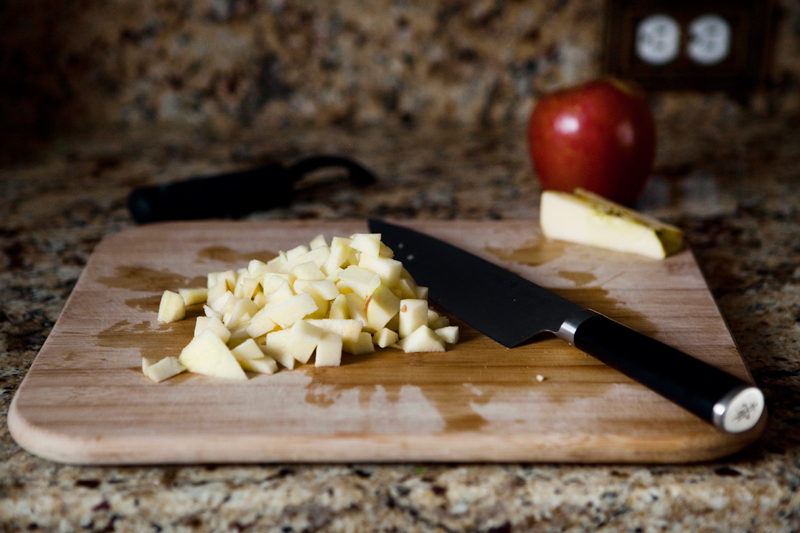 I chose to peel the apples before chopping them. 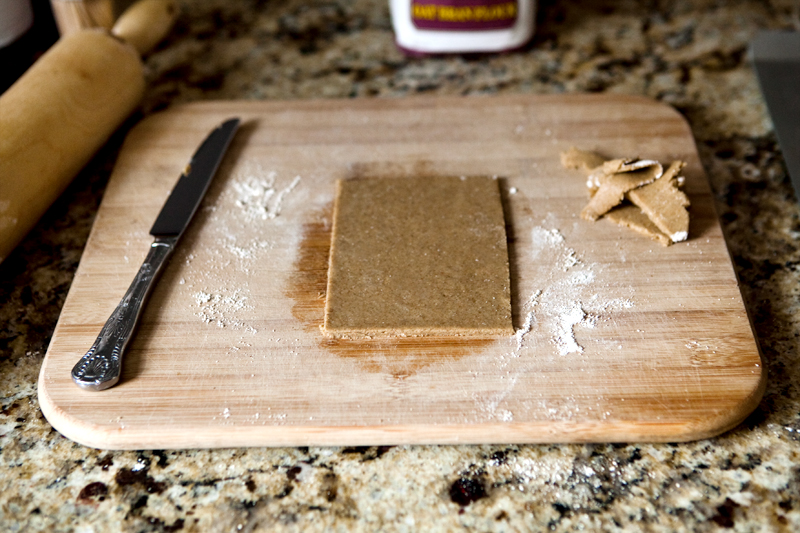 While your apples are cooking and filling your kitchen with wonderful smells, roll out your dough on a board dusted with oat flour (dust the roller too.. this is a sticky dough).  Cut out a long rectangle and place on a well-greased cookie sheet.   One recipe's worth of dough should make about four pop-tarts, approximately 2x4 inches in length.  I recommend doubling the crust recipe, as I had quite a bit of apple filling leftover. 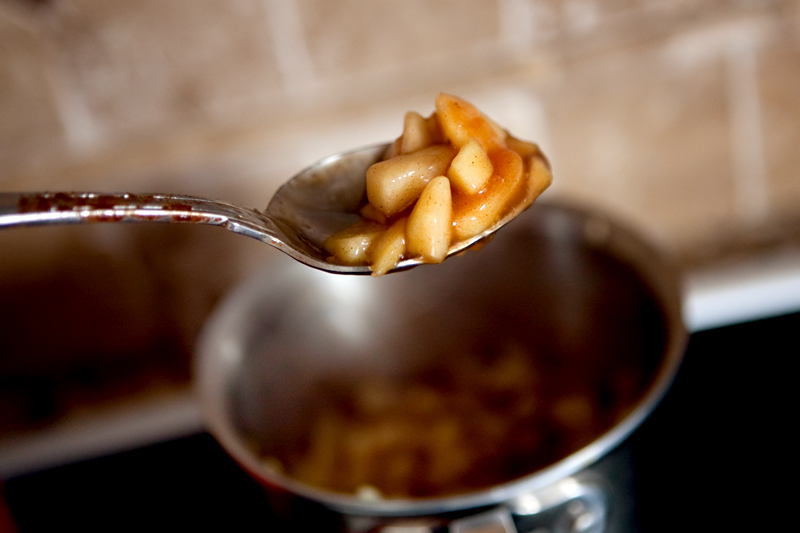 Meanwhile, on your stove, delicious magic should be happening.  You know it's done when you take a test bite and get sent straight to heaven, or when your husband floats into the kitchen with his sniffer held high into the air, trying to determine the source of the wonderful smell. 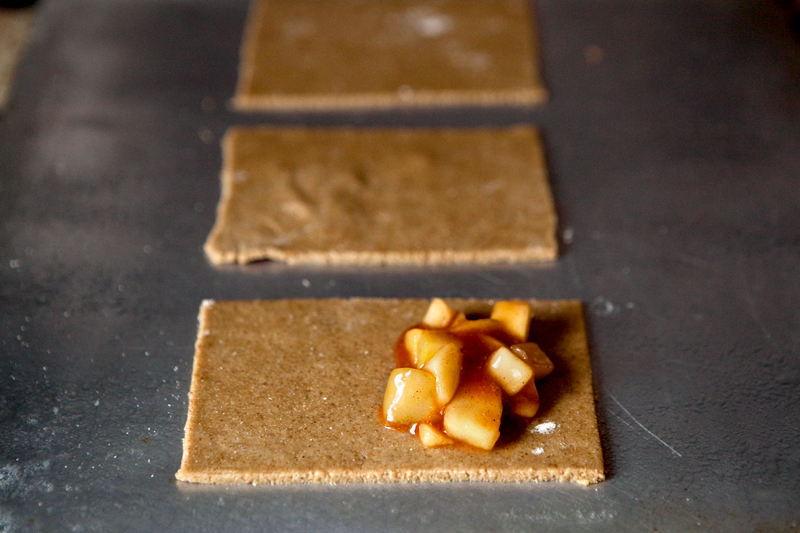 Place a spoonful of filling on one side of each rectangle, being sure to leave room around the edges. 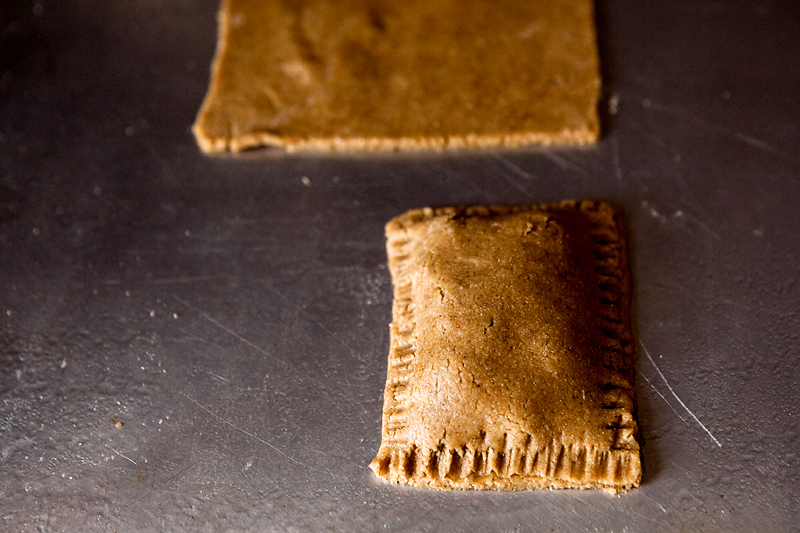 Fold in half and use a fork to seal the edges. 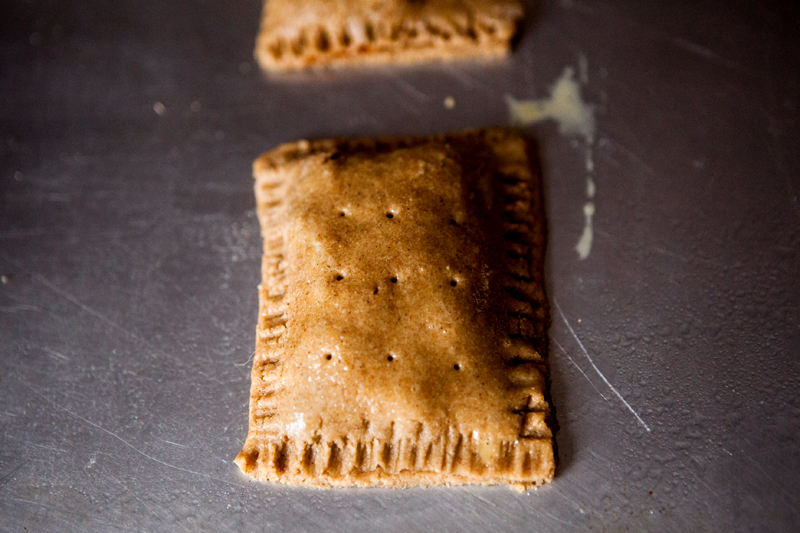 Use a pastry brush to coat the tarts with the other beaten egg.  Use a toothpick to poke some steam vents.  Make sure to poke your holes AFTER you brush with egg, otherwise you'll seal them right back up and increase your chances of the filling exploding out of the tart while they bake. 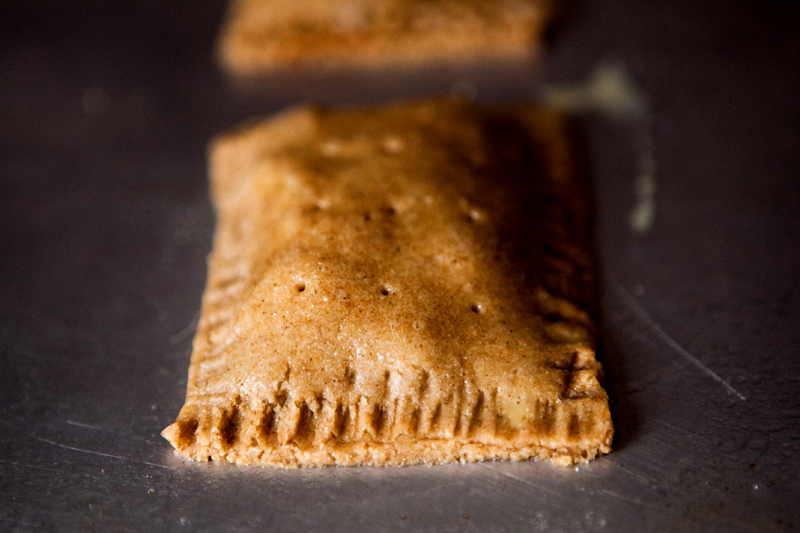 If you want to sweeten things up, coat the top with a sprinkling of raw sugar before baking.  If you want to keep them free of processed sugar, you can serve the finished tarts with some organic honey instead.  Pop those puppies into your pre-heated 375 degree oven for about 12-14 minutes.  It's a little difficult to tell when the crust is done, because it's already golden brown to begin with.  I pushed on them gently a couple of times until they were the desired crispiness.  When they are done, drizzle with a bit of melted butter or honey and serve while warm. 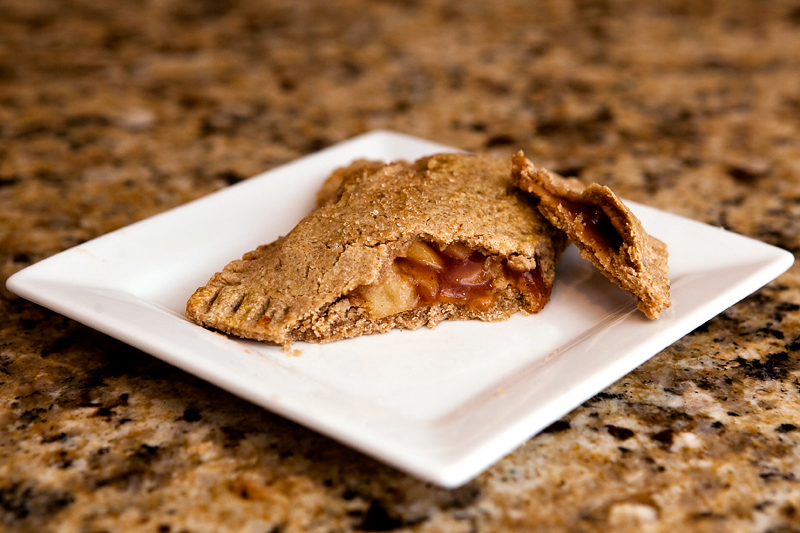 All done!  We thought these were very tasty.  It was my first time baking with oat flour, and I really enjoyed the bold "oaty" flavor of the crust.  The filling is perfection, and reminds me a lot of the cinnamon apples side dish at Chili's.  Not adding any extra sweetener preserves the natural flavors of the apples (which are actually pretty sweet to begin with) and cinnamon.  I would eat it just by itself!

I almost hesitated to call these pop tarts after I made them, since they are dancing dangerously close to turnover territory.. but then I thought that the texture of the crust much more closely resembles a pop tart than the typical flaky puff-pastry crust of turnovers.  So the name stayed.  🙂 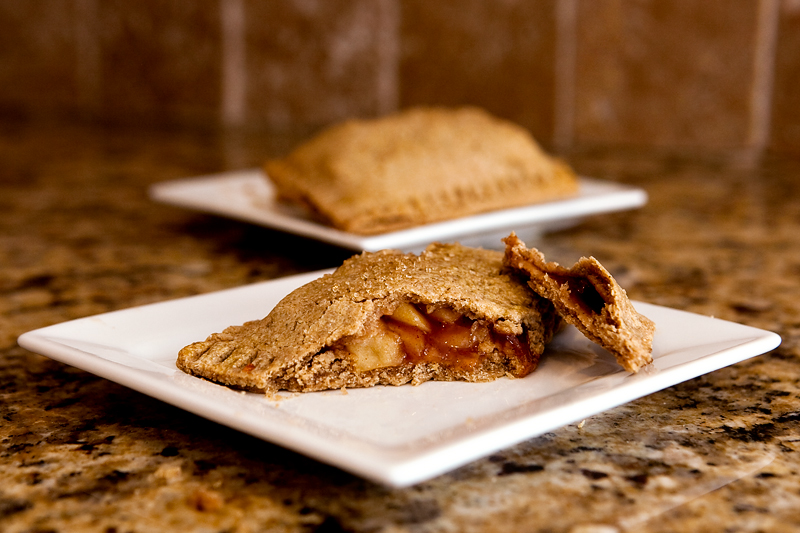 So it's not exactly as convenient as pulling out a shiny silver package of pop-tarts and shoving one into the toaster.. but it's a heck of a lot fresher and a bit better for you, too!

« Someone get these boys an agent!
Rockin' Around Our Christmas Tree »