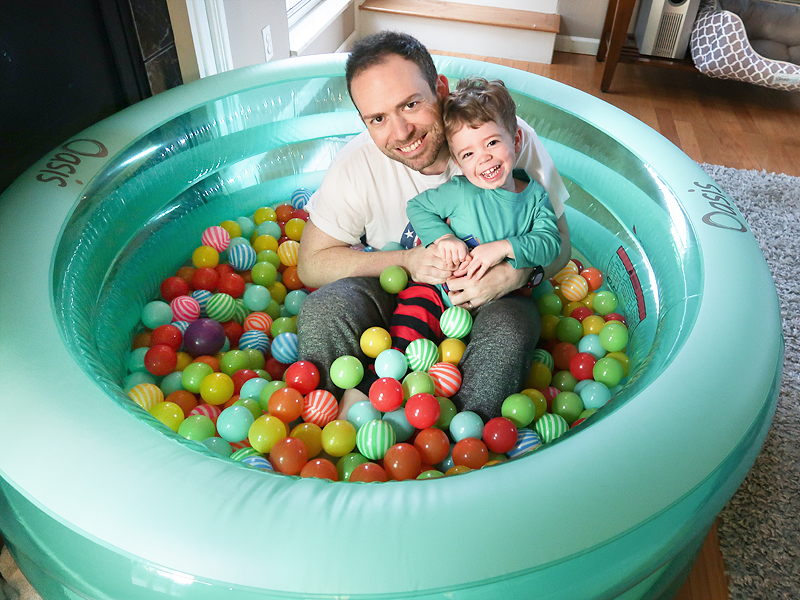 Phew, it's been a little while since the last Dailies post, so let's just jump right in [to a big ole pool of balls]. 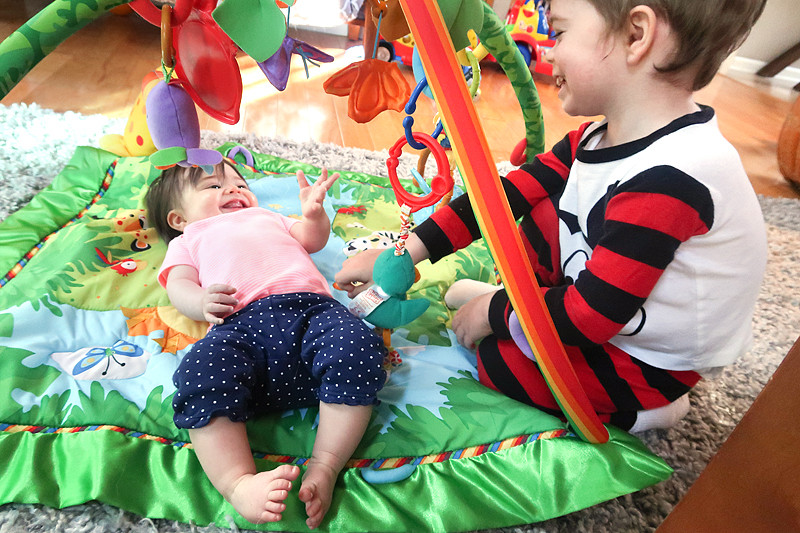 To our surprise and relief, Jasper hasn't exhibited any signs of jealousy about his sister ("baby sitta!").  In fact, no one in this house can make her smile and giggle like he can! 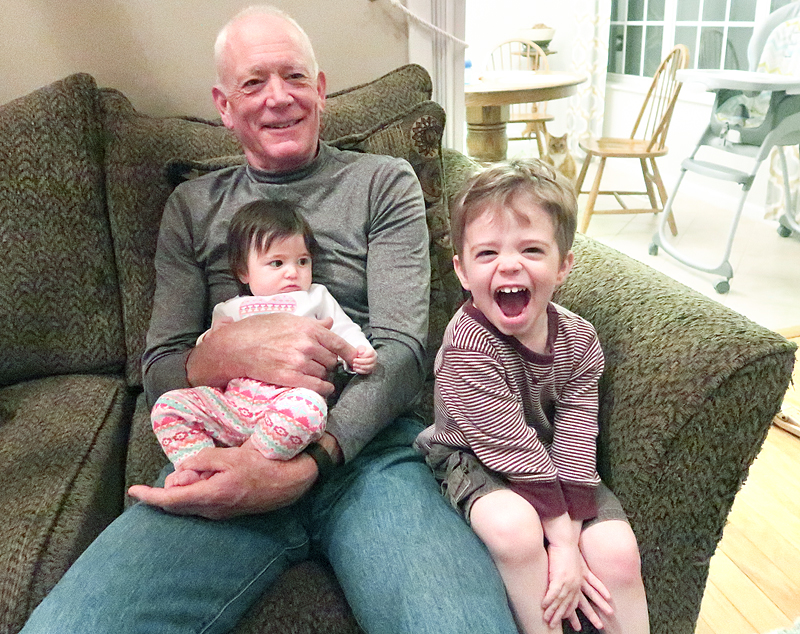 Matt's parents have been visiting more frequently as they work toward building a home nearby, so the kids have been able to see lots of Grandma and Grandpa. 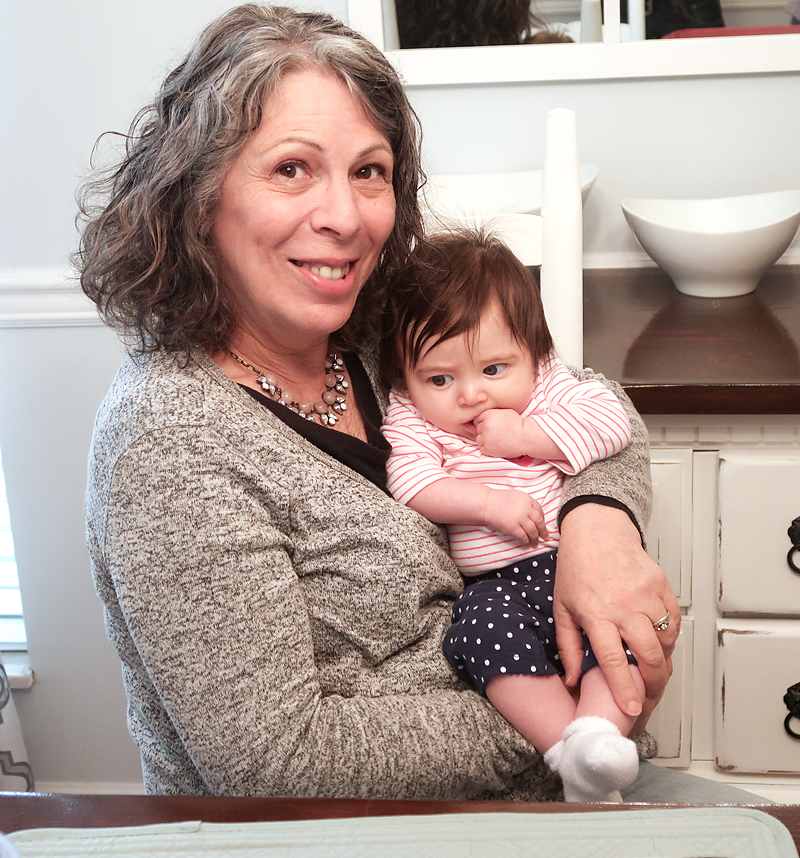 Jasper is crazy about both sets of grandparents and Shelby is getting lots of quality time with them as well, which is fantastic! 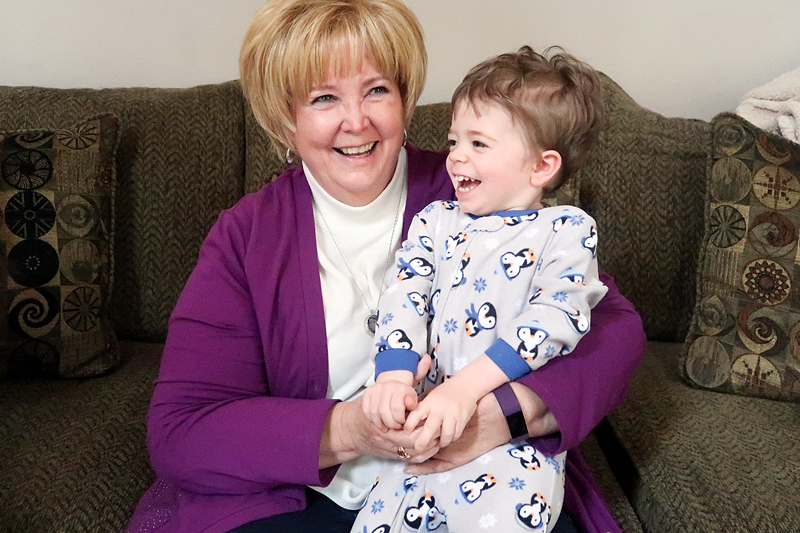 Jasper is my mom's little buddy, for sure.

I feel like I'm constantly apologizing for his hair.  I seriously can't do anything with it.  I brush it, gel it, even spray it, and 15 minutes later it'll curl up and stick straight up again.  Doesn't help that he likes to roll around on the floor and against the furniture, so it actually gets WORSE if there's any product in it.  He's just gonna have to rock the crazy hair. 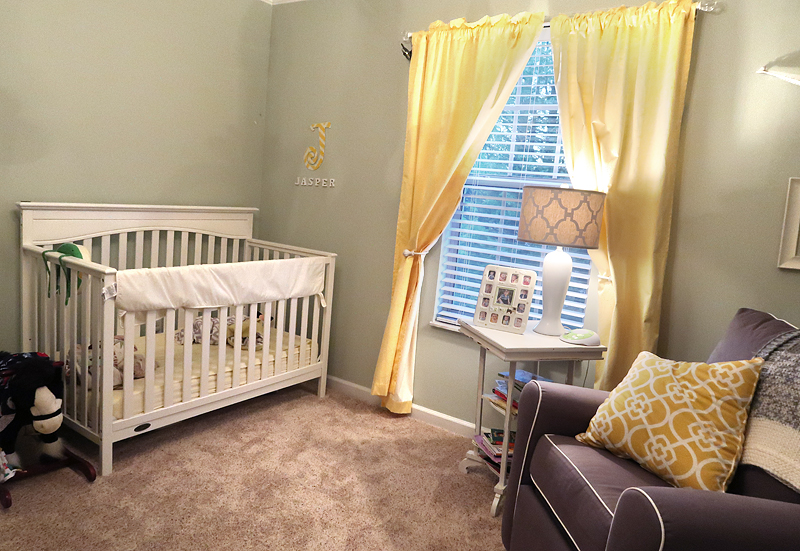 Over the winter we decided it was time to upgrade Jasper to a Big Boy Bed, since we wanted Shelby to inherit the crib and finally be moved into her nursery full-time.  I took one last photo of Jasper's room before we moved the crib to the room next door. 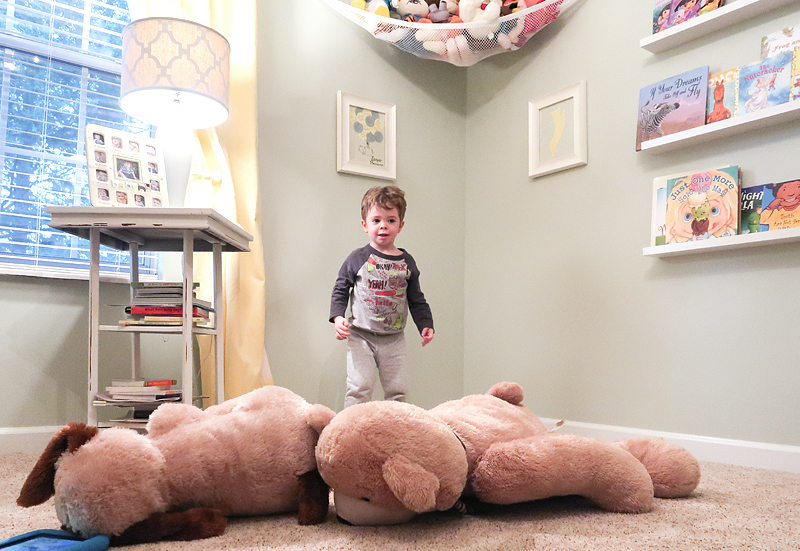 He didn't seem to mind our "story chair" (the nursing glider I bought for when he was a baby) being moved into Shelby's room.  He was too busy dive-bombing his giant animals. 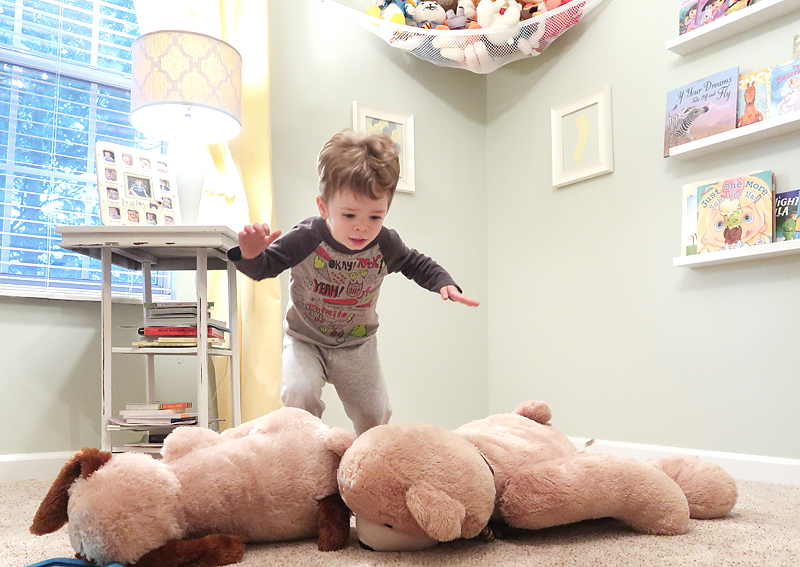 Seriously, where does toddler energy come from?  The boy never stops moving. 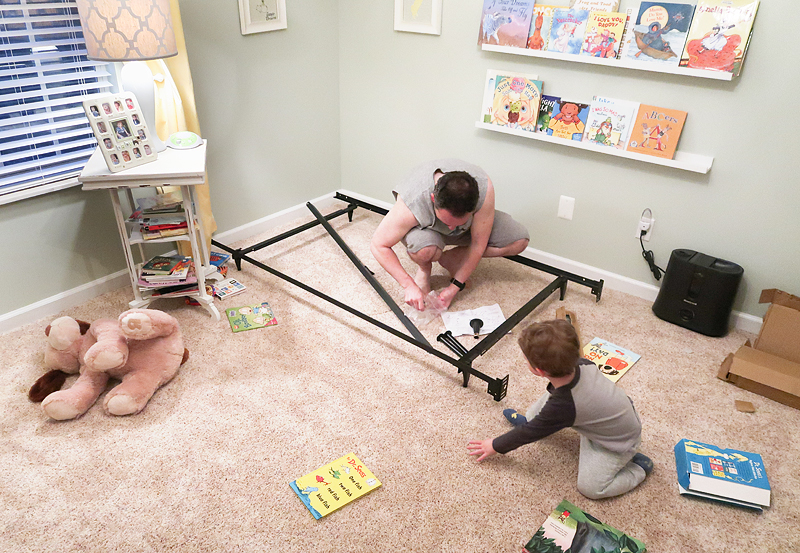 After spending some time researching which bed is best for toddlers, we ultimately decided to forego the toddler-sized bed and go straight to a twin size so that he could keep it longer.  We ordered everything from good ole Amazon.  Here's what we bought:

The bed sat in his room with his crib for a couple of weeks so we could finish child proofing the rest of the upstairs in case he decided to go exploring in the middle of the night.  I think having the bed in his room but not actually being expected to sleep in it yet helped with the transition.  When we finally moved the crib into Shelby's room and completed his first bedtime routine with the new bed, he took right to it.

In fact, he never got upset about the new sleeping arrangement, has slept all night every night, and doesn't try to get out of bed until one of us goes to get him in the morning.  We're shocked and soo incredibly grateful that it was a completely painless transition.  We can only hope that potty training will be as easy.

Of course, getting to sleep in Thomas the Tank Engine bedding had to have helped with him being excited rather than scared.  He talked about his "Thomas bed" every day that the bed was sitting in his room but before he was sleeping in it.  I found the comforter and pillowcase set from Amazon and I ordered the sheet set from Bed Bath & Beyond. 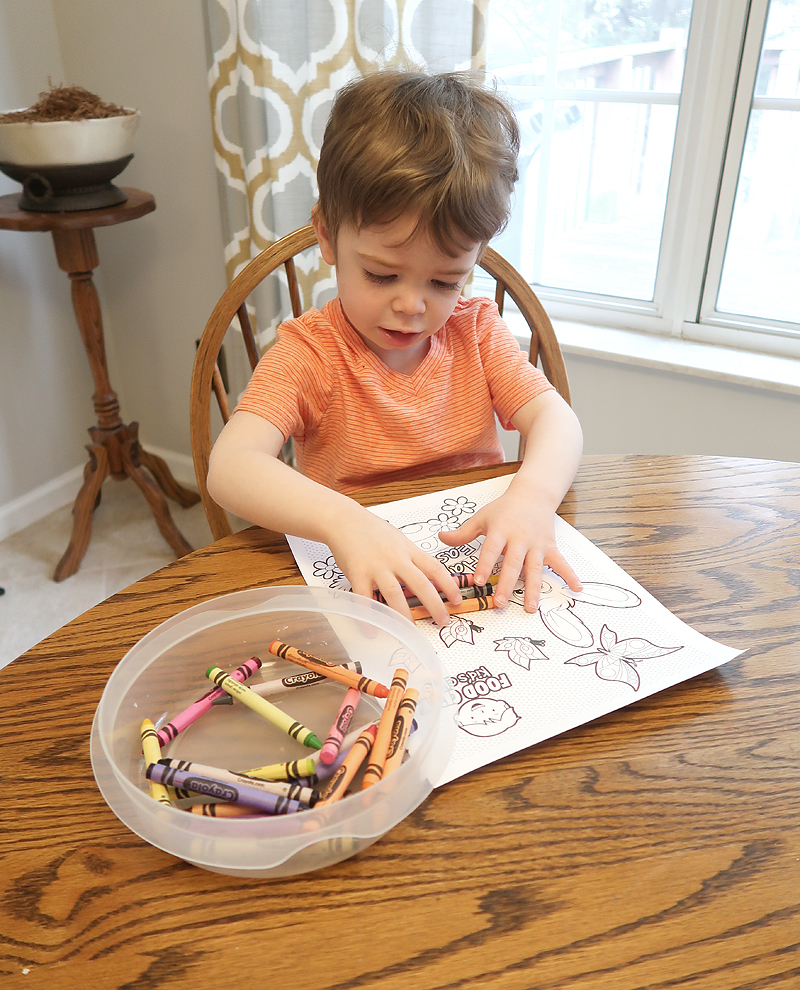 At least once a day Jasper asks to play with his colors "cuh-wuhs" at the table, and he has to have his Easter coloring sheet I picked up randomly at the grocery store one day.  "Cuh-wuh East-oh pick-cho!"  Except he doesn't actually color it... he just wants to play with the crayons like toys until he gets bored.  He's not really into scribbling or trying to draw just yet, but he sure does love playing with the crayons and naming the colors. 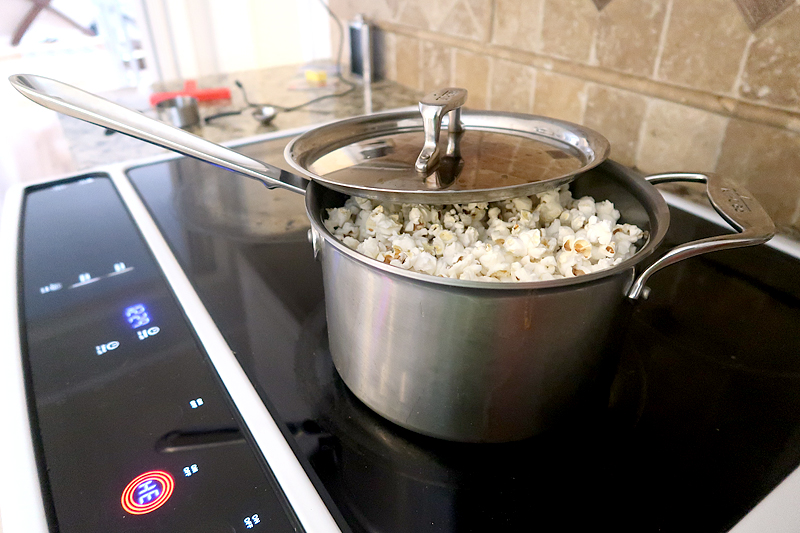 Now let's talk popcorn, a frequent weekend snack around here.  We pop it on the stove with a lil' oil (peanut, canola, or coconut oil all work great) and typically make a big ole pot of it so that it sticks around for a while. 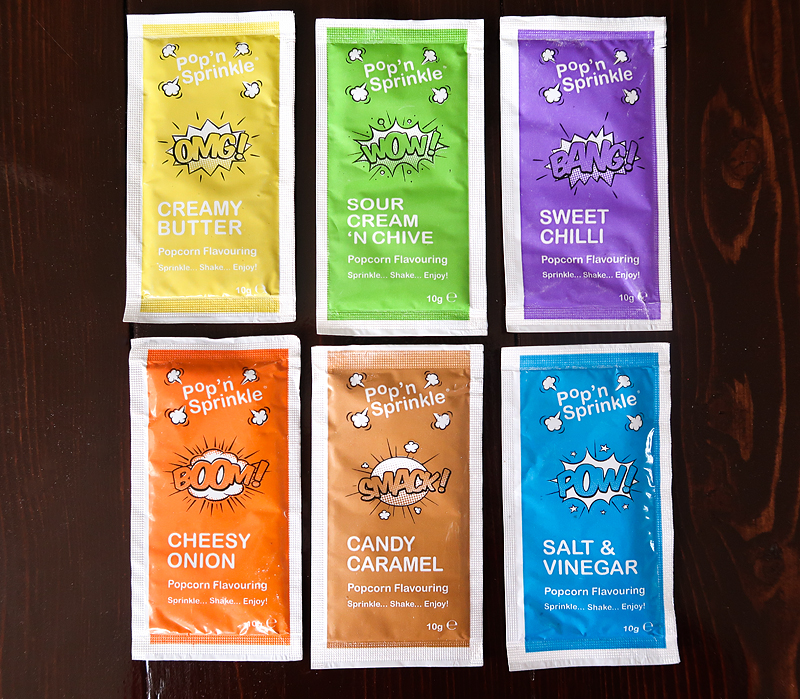 Pop 'n Sprinkle sent us some packets of their seasoning for us to try and we went on a sprinkle fest and tested all of them in a single sitting, because reviewing new snacks is just so much fun.  Pop 'n Sprinkle is based in the UK and their seasonings are already being used in movie theaters in Dublin, Edinburgh, and London.  You can also have seasoning packets shipped directly to you via their online shop. 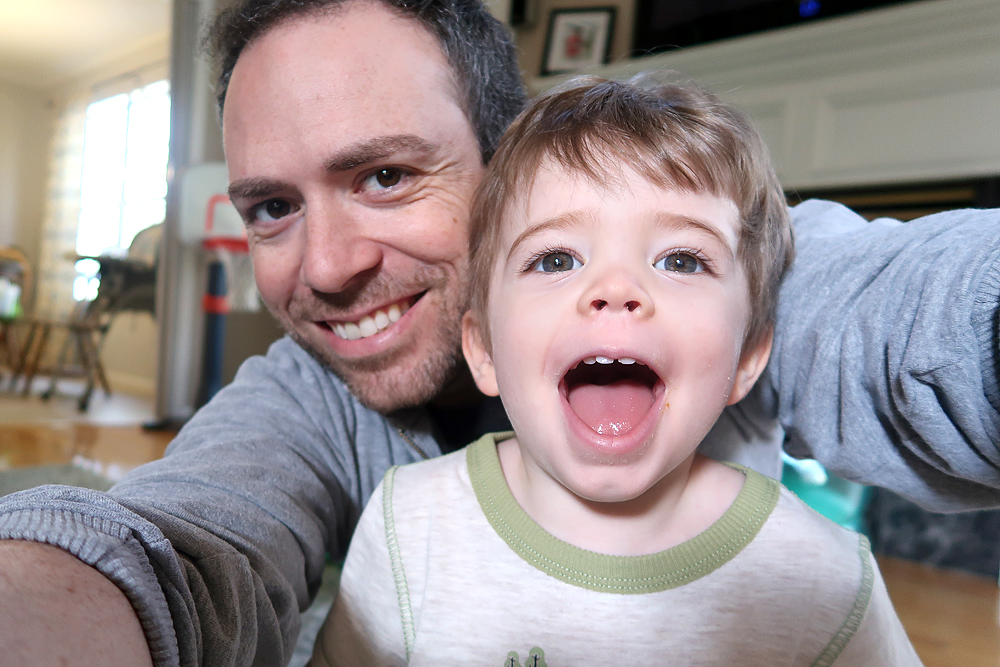 Jasper has grown to be a popcorn ("pop-coin") fan as well, and he's even open to trying new flavors and seasonings so he's become quite the little sidekick when we taste test new food products for the blog. 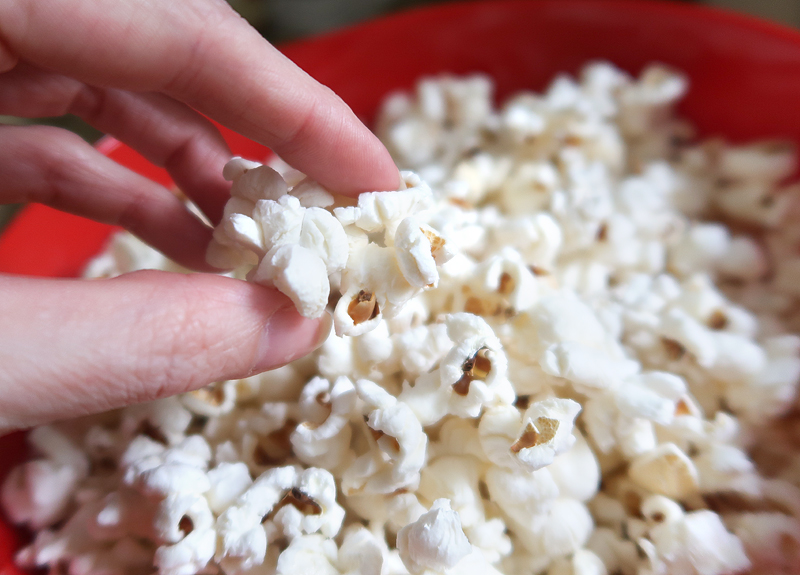 We separated out some popcorn in several little bowls and got to tasting:

Pop 'n Sprinkle Cheesy Onion: Upon first bite this seasoning was quite salty and then the onion and garlic hits, followed up last by a mild cheesy taste.  While I liked this one, if I'm wanting some cheese popcorn I prefer the cheese to be more of the star player in the flavor profile.

Pop 'n Sprinkle Sour Cream 'n Chive: We tasted this one without any expectations and agreed that this was a surprising favorite!  The sour cream flavor is spot-on and is in balance with the fresh and herby chives.  I was surprised to see powdered sugar in the ingredients list but I couldn't detect much if any sweetness in the seasoning.  Two solid thumbs up from both of us.

Pop 'n Sprinkle Salt & Vinegar: I'm familiar with salt 'n vinegar potato chips but I would never have thought to try the same combo on popcorn... it works!  You have to be a fan of salty vinegar and love that mouth punch it gives you with each bite, but fans of the popular potato chip flavor should not miss out on sprinkling this stuff on their popcorn when settling in to watch a movie.  I appreciate being able to get that same powerfully-flavored crunch without the extra grease from a typical potato chip. 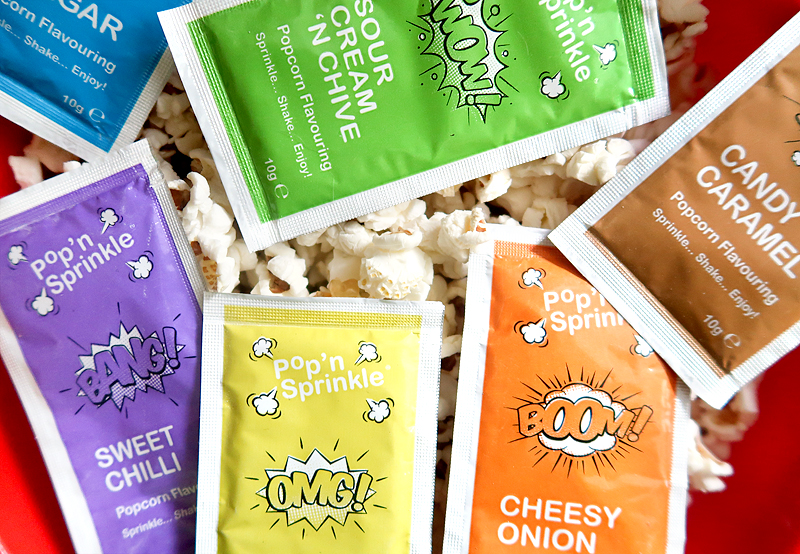 Pop 'n Sprinkle Creamy Butter:  I'll admit to being a purist if I'm going to put butter on my popcorn - I usually just go for the real thing, or sometimes I'll use the spray butter if I don't want to fuss with melting and want a lighter coating.  I'd never used a powdered butter seasoning on popcorn before but can see it being a great alternative for those wanting to cut the fat and calories of the real stuff.  Creamy Butter had a bright, clean butter flavor and we both enjoyed it.  Pop 'n Sprinkle suggests using it as a base in combination with some of the other seasonings and I can see that being a great idea.

Pop 'n Sprinkle Sweet Chilli:  We were both looking forward to this flavor the most because of one of our favorite junk foods is Spicy Sweet Chili Doritos (have you tried those?  ugh, so dangerously good).  Powdered sugar is the first ingredient listed and the sweetness takes center stage at first bite, followed up by the spicy chili flavor pulling up the rear.  Matt thought the balance of sweet and heat worked fine the way it was, but I thought it could have used a bit more spice and a little less sweet.  Overall though, it's a solid option.

Pop 'n Sprinkle Candy Caramel: We saved this flavor for last as the dessert of our test.  Before trying this one I set myself up to be disappointed, as I've tried a few brands of caramel popcorn seasonings that end up tasting like plain ole sugar, but this one has great caramel notes to it and I ended up liking it a lot.  While nothing fully replaces the bliss of popcorn absolutely smothered in a crunchy real caramel coating, this is an awesome substitute and is the best powdered caramel popcorn seasoning I have tried.

Overall Thoughts:  Pop 'n Sprinkle has a great product here and a few of the flavors are true stand outs in the popcorn seasoning world, especially Sour Cream 'n Chive and Salt & Vinegar.  I think it's an awesome idea that they are trying to expand their distribution into the movie theaters, because who wouldn't want more flavor options for their popcorn when seeing a movie?  Even if you don't live near a Vue theater in the UK, the seasoning comes packaged in convenient small envelopes that you can pop into your purse and sprinkle it on yourself. 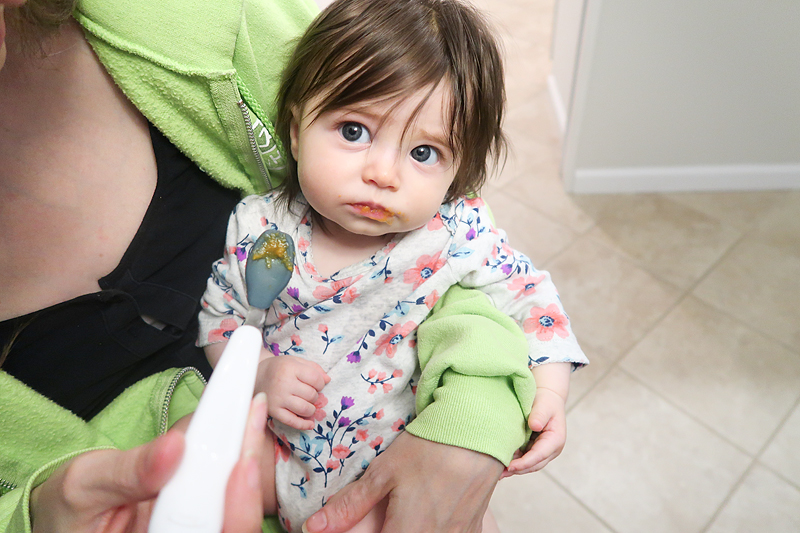 Shelby's not quite to the point of helping us out with blog tastings, but she's getting there, because just a few weeks ago we started introducing her to solids!  Most of the time she eats Beech Nut baby oatmeal (I buy the sensitive stomach kind to help ease the transition for her digestive system) and she's also tried sweet potato puree (Beech Nut Organics).

There's bound to be a few stinky faces when trying brand new foods.  And a few new stinky diapers, too, but that's another story.  I was in a gif-making mood for this post and I still need to work on quality vs. file size so I apologize if this post is a little more slow-loading 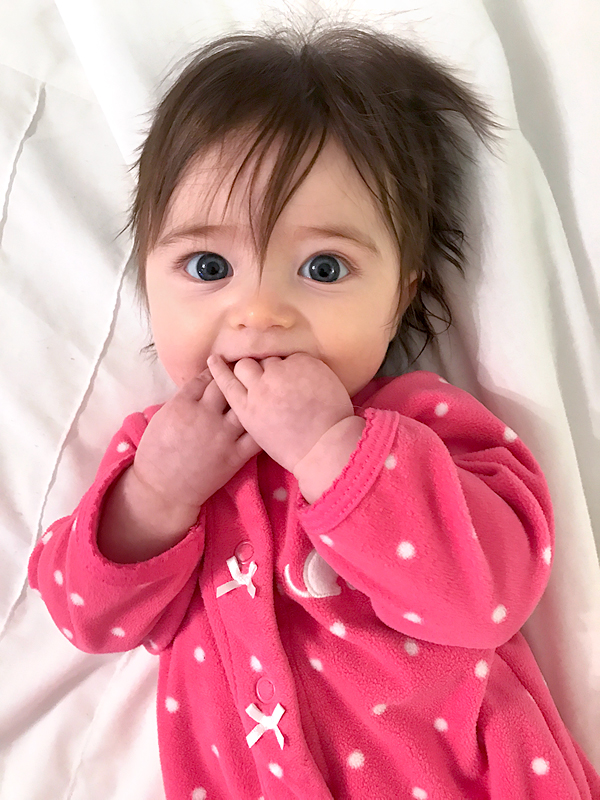 And just one more of Baby Sister, because we think she's great all the way around, from her adorably pretty face and amazing head of hair to her (usually) calm and sweet temperament.

Question for you: leave answers in the comments!

What's your favorite flavor of popcorn?  Do you make it yourself or do you have a favorite packaged brand?

If you have kids, how did the transition from crib to "big bed" go for you?

Dailies | Christmas Fun and Elf on the Shelf!