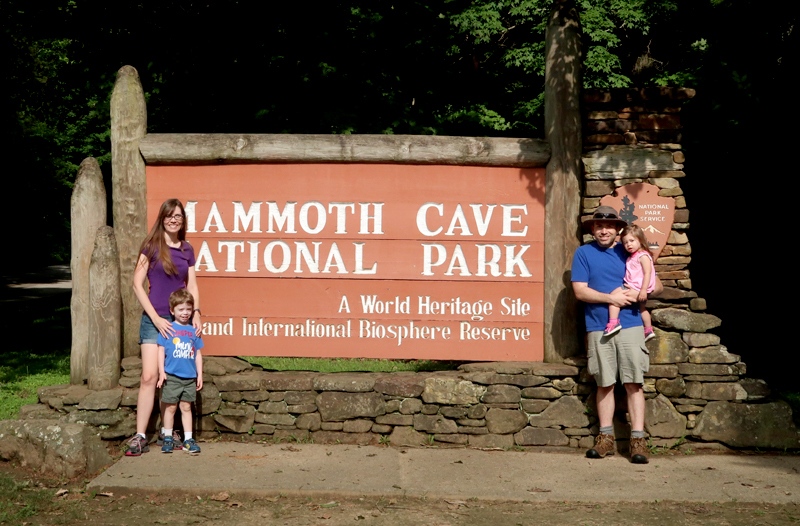 Going spelunking through the vast Mammoth Cave is what brings most of the nearly 2 million visitors to the park each year.  There's over a dozen different options for tours in varying lengths and degrees of difficulty.  An accessible tour is also available for those in wheelchairs or with mobility issues. 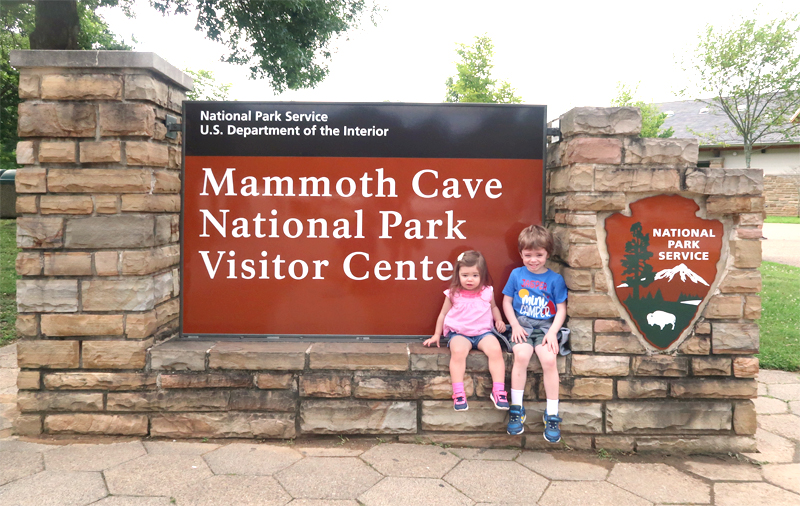 Our kids are 3 and 1, and while the oldest is capable of completing the tour on foot, our little girl hasn't quite learned how to hold hands and walk along with us.  Well, not without trying to dart away or climb under other people's legs, that is.  Since there are no child backpack carriers allowed on any cave tour, we knew that she would have to be carried through the entire tour, so we chose The Frozen Niagara because of its short length and easy degree of difficulty. 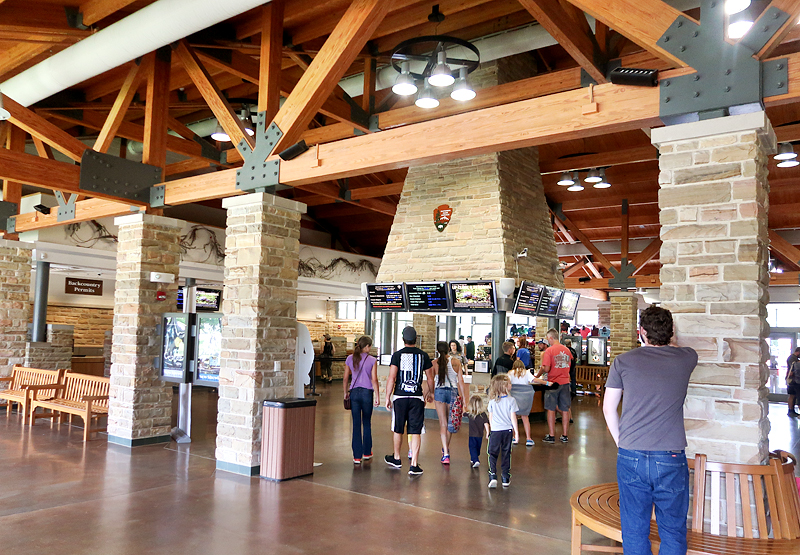 We made our reservations several weeks in advance for a 9AM tour.  We showed up about 15 minutes early so that we could hit the bathrooms, pick up some info pamphlets, and check in with a ranger about where to meet up with our group.  We also took note of the two gift shops in the center for visiting after our tour! 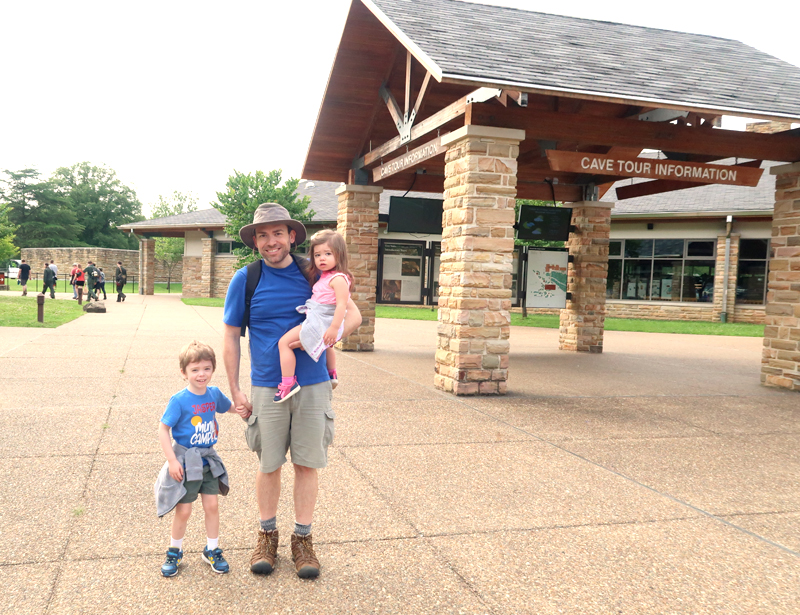 We exited through the back doors of the visitors center and made our way to Shelter B to meet up with our ranger and tour bus that would take us to the cave entrance.  Since the caves maintain an interior temperature of about 58 degrees all year, we tied some cool hoodies around our waists (well, not my perpetually overheated husband) so we could pop them on if we got chilly inside. 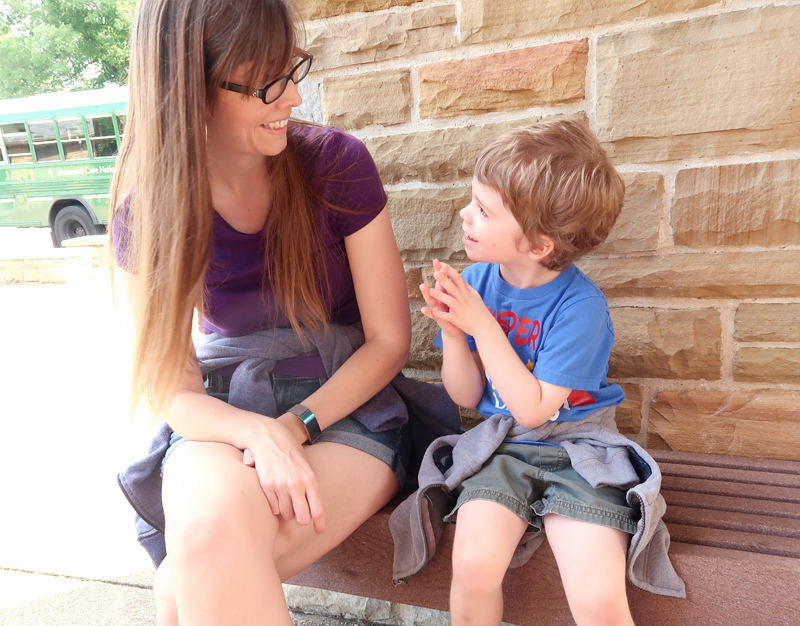 Jasper kept talking about going inside of a "reaaaal cave!" and got excited when he realized he'd get to take a ride in the park's green school buses to reach the cave entrance. 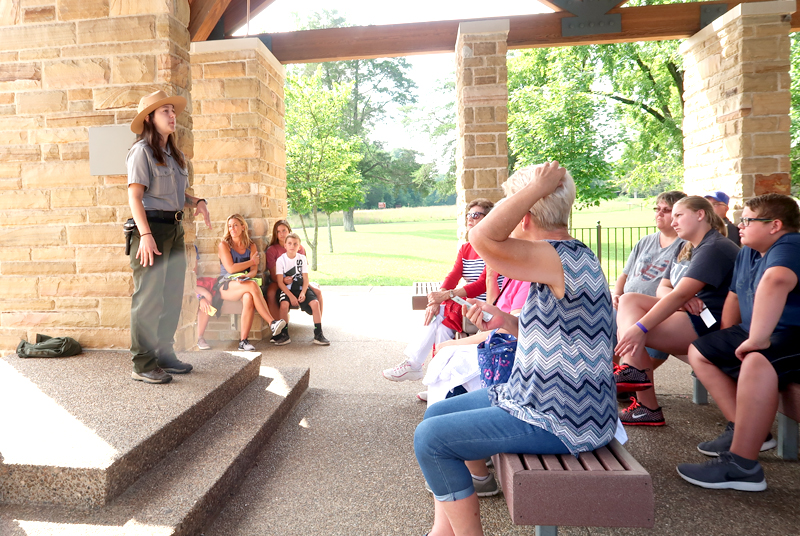 Ranger Julie met us at the shelter and gave us lots of important information about the tour, including safety information.  We were told that at the end of the tour we would be required to walk over some black mats soaked in soapy water to help prevent the spread of white nose syndrome in the cave bats (not dangerous or transferrable to humans or pets, don't worry).  Note that if you are wearing sandals or flip-flops, your feet will get wet when walking across the mats! 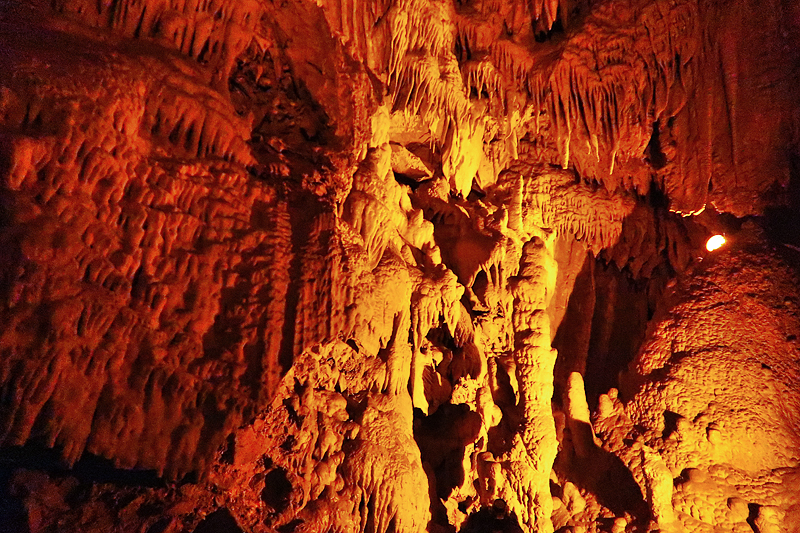 The new man-made entrance to the cave took us through a revolving door and tunnel lit with eerie red lights.  Jasper kept asking if the cave was on fire during this section - it was really very cool!  Ranger Julie made several stops along the way to give us some interesting information about caves and how they "grow".  She used her flashlight to point out the *huge* cave crickets that are absolutely everywhere.  You won't notice them before the ranger points them out, but after he/she does, you will see them everywhere!! 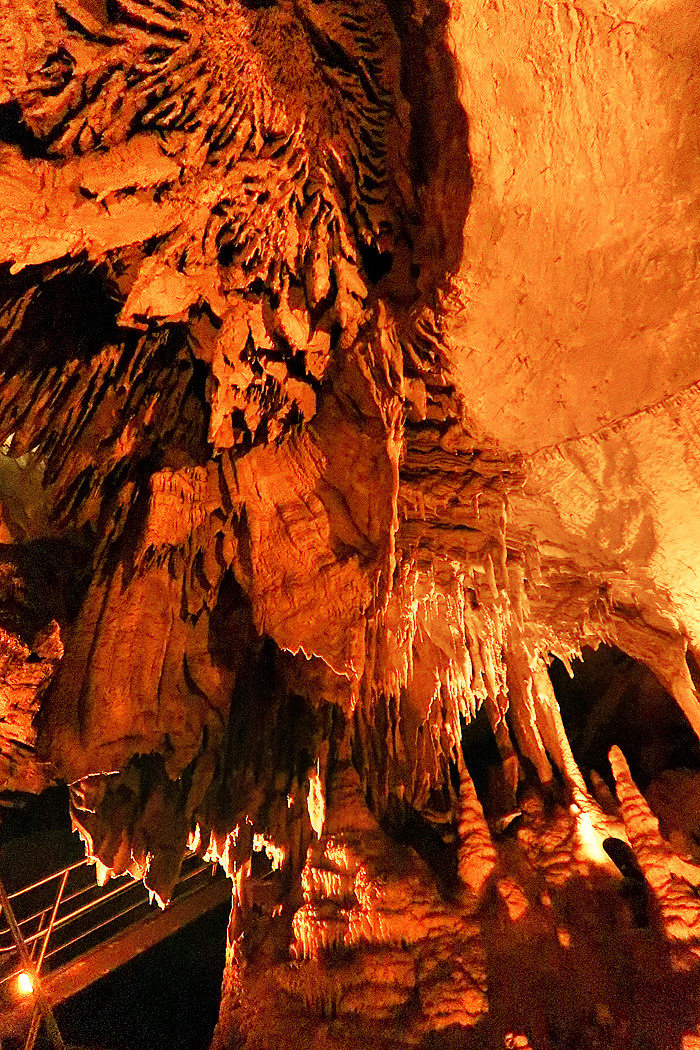 Our tour guide pointed out all of the varied formations visible during this tour.  Frozen Niagara is an excellent tour for families with young children who want an easy tour but also want to see a good mix of cave formations.  You can expect to see flowstone, stalactites, stalagmites, columns, cave bacon, draperies and more. 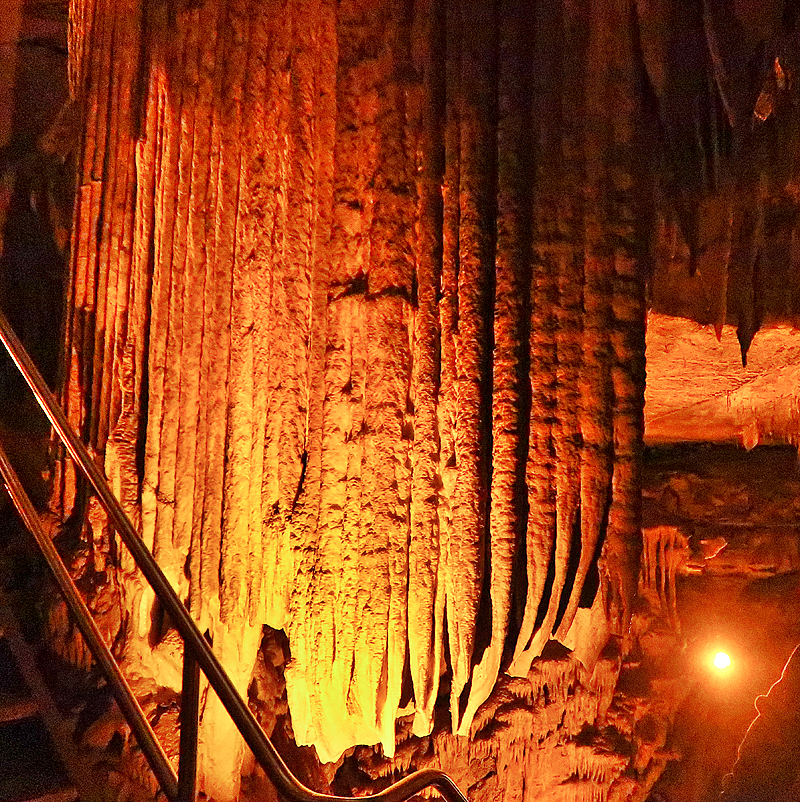 There's an optional stairway of 49 stairs to take you into the drapery room, but for those who aren't able to complete these additional steps, the entire tour can be seen by skipping this part.  The steps will take you right by the Frozen Niagara flowstone formation, which looks like a frozen Niagara Falls made out of stone. 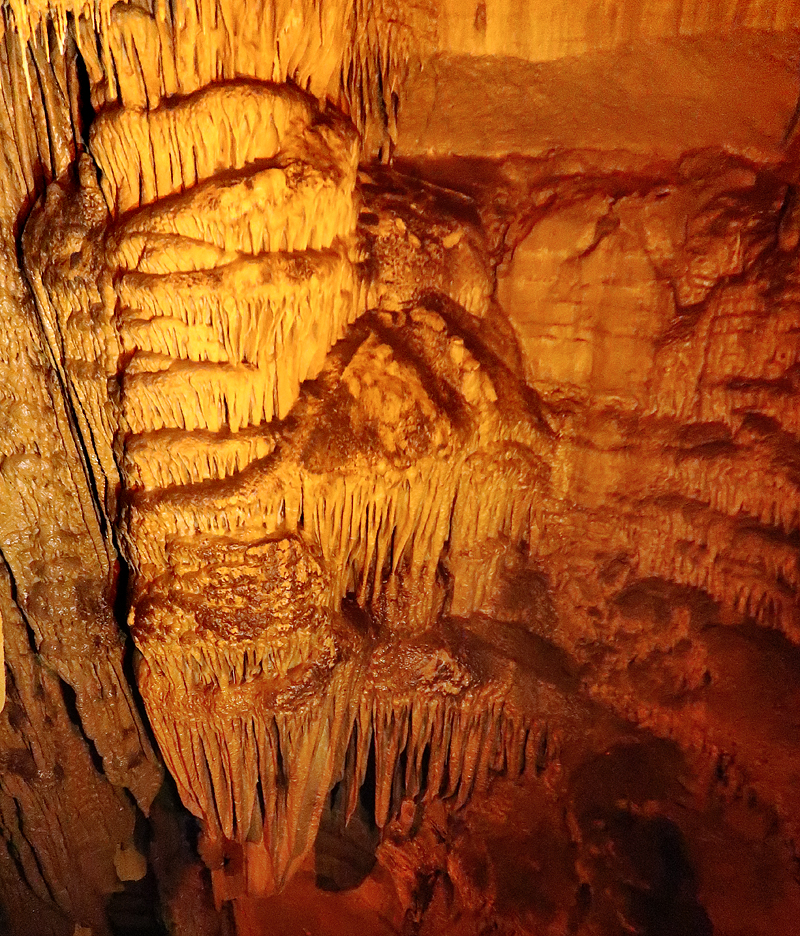 The pacing of the tour was perfect and we never felt rushed when trying to view the formations or take pictures and video.  The group was a nice size - I want to say about 30 people - so it never felt over-crowded. 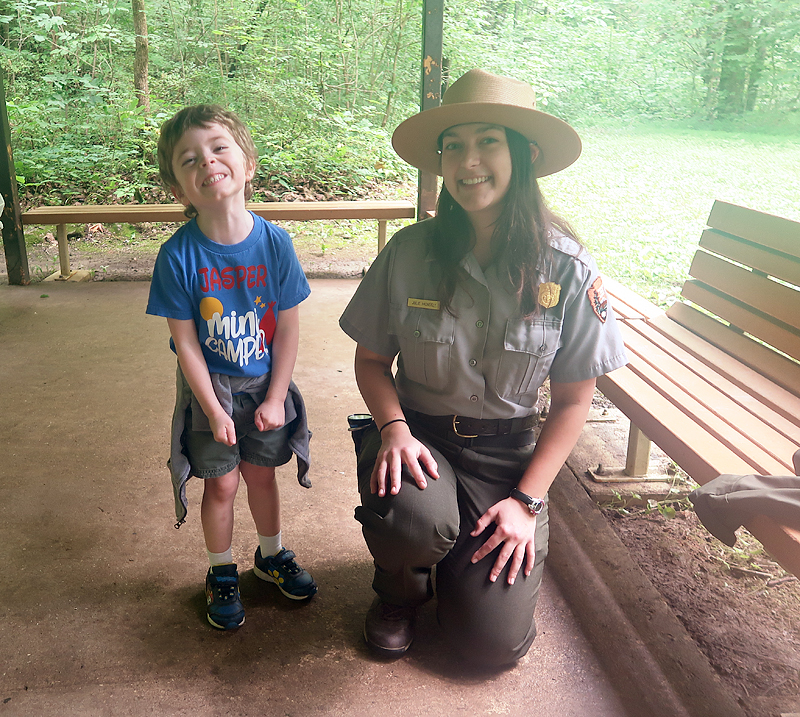 As expected, our camera lens (and my glasses) fogged up the instant we stepped out of the cool cave interior back into the humid hell of Kentucky summer and no amount of wiping was going to clear it in time for me to get a cute photo of Jasper with Ranger Julie, but we tried!

The Frozen Niagara was an ideal tour!  If you're traveling to Mammoth Cave with your little ones, I highly recommend it.

Want to see a fun vlog of our trip to the cave?  Please take a look at the video below!