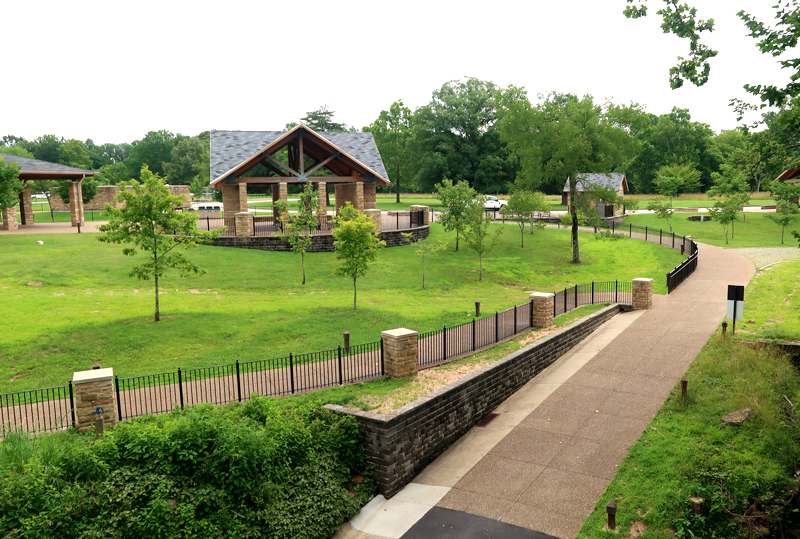 Now that our kids are no longer babies we have been able to start easing our way into hiking again.  We used to be avid hikers, spending several weekends per month in the mountains and traversing some really difficult trails.  We've been starting small now that we have our kiddos in tow, but now that Jasper has built up some stamina going on walks with me at home, he's able to tackle some short easy trails on his own two feet.  One such trail was our hike to the River Styx Spring during our stay near Mammoth Cave, Kentucky. 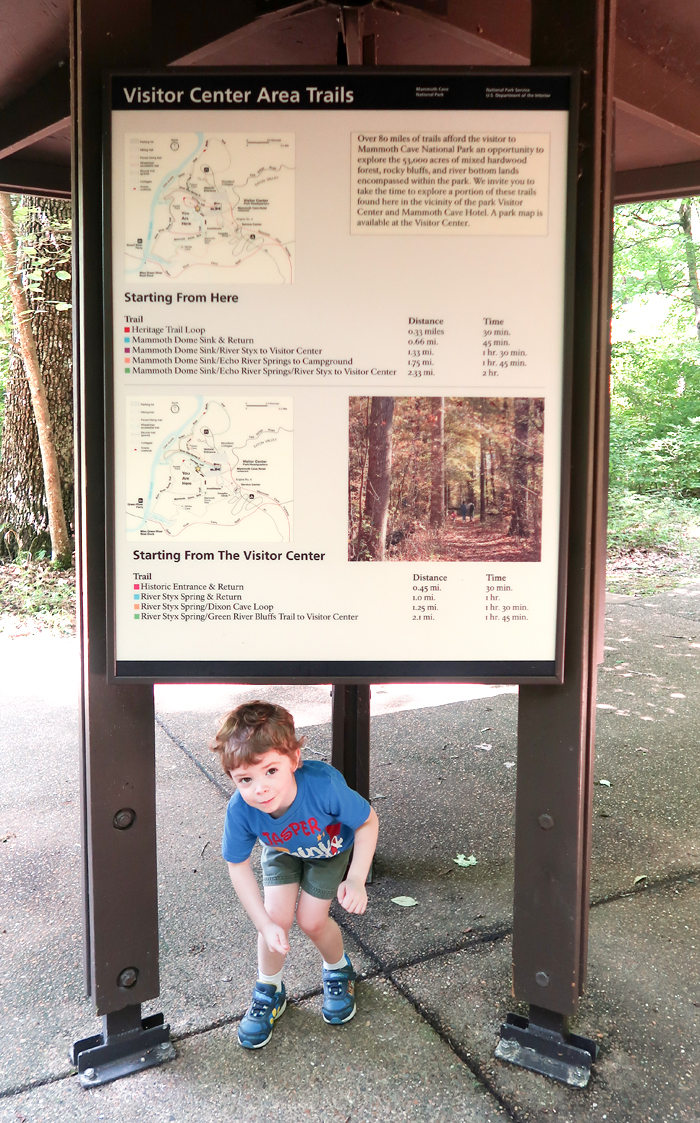 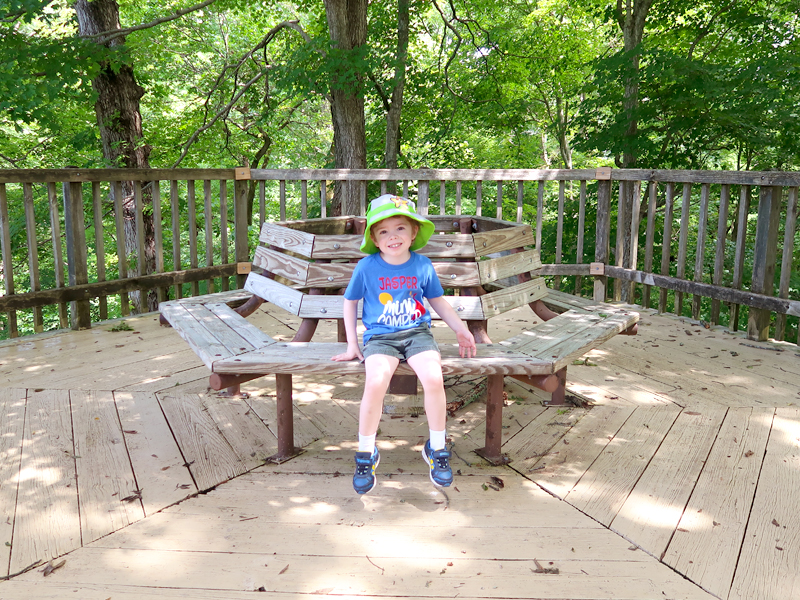 I don't know the exact distance we covered during the round trip as we picked up several trails, but I would estimate it to be less than 2 miles - not long at all and great for kiddos! 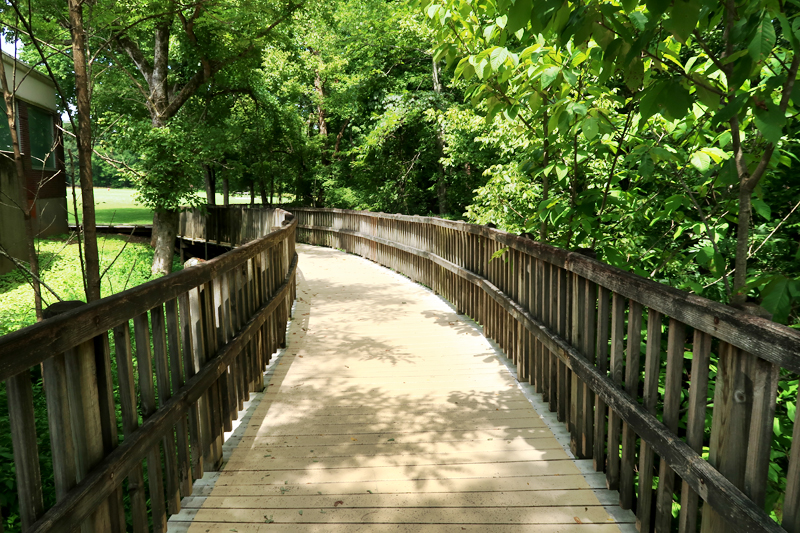 Each part of the trail is unique and beautiful. 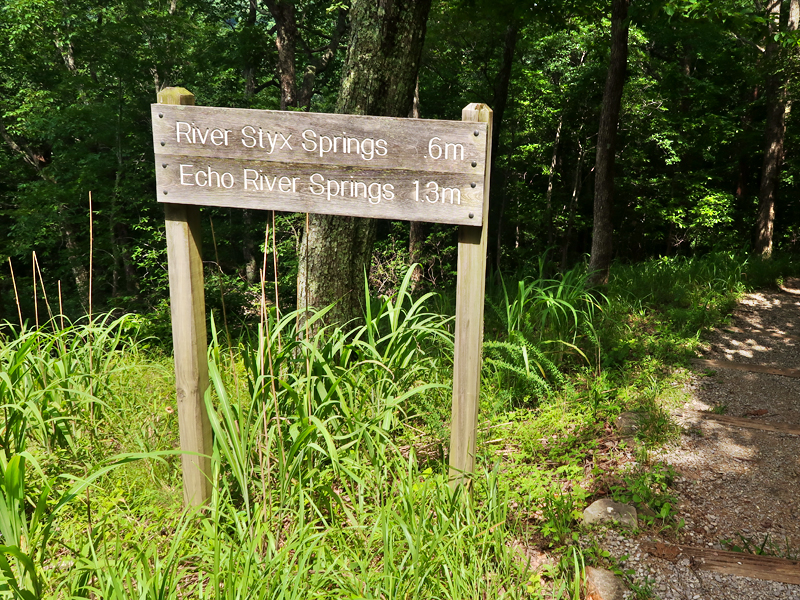 All of the trails in this area are short and are kid and doggo friendly! 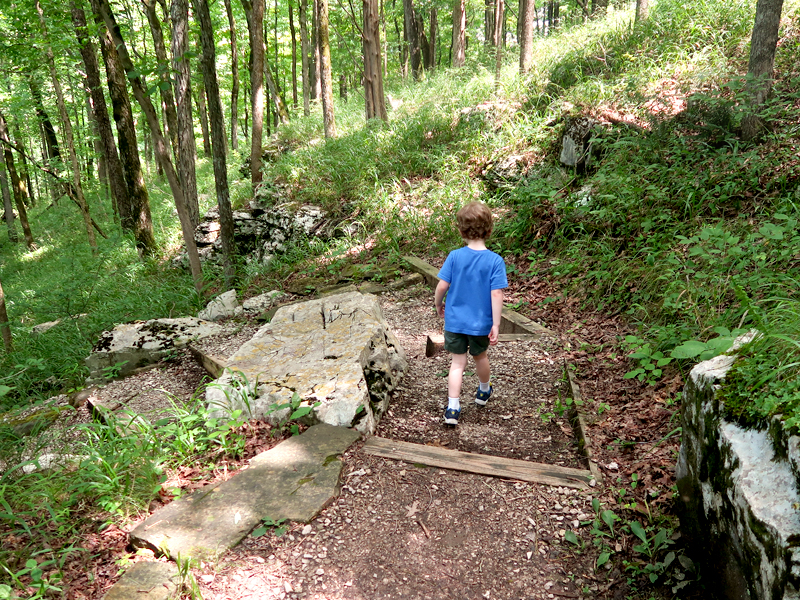 The terrain is nice and easy with hard-packed dirt and light gravel in some places.  Some of the hilly areas are cut with natural stairs. 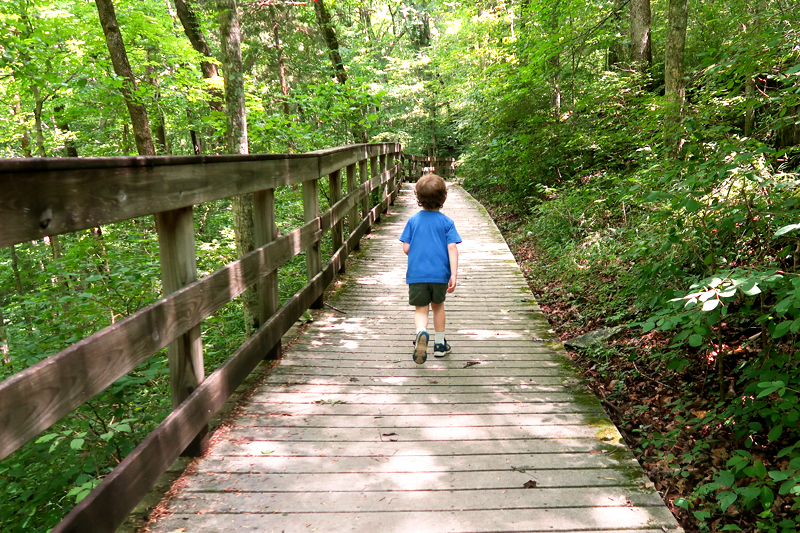 Much of the trail is boardwalk and it's all very shaded, something we were grateful for on such a hot day. 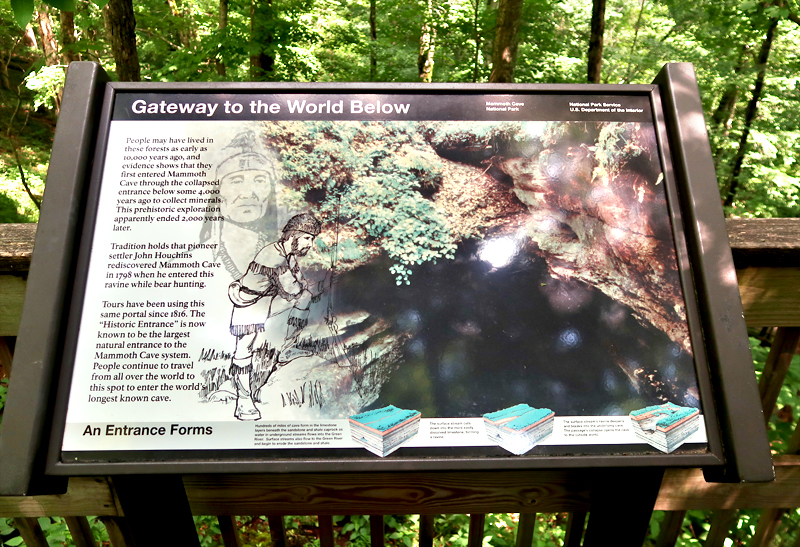 Near the earlier part of our hike we had an overlook to the largest natural entrance to Mammoth, now known as the "Historic Entrance".  On the return hike we passed by the entrance directly, but you don't need a sign to tell you when it's near - you will feel the glorious cool blast of air coming from the cave long before! 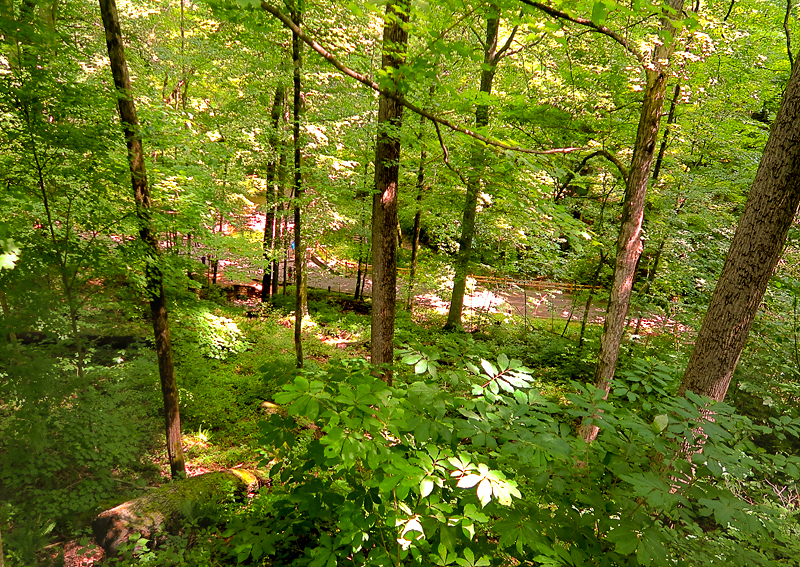 Thank you, dense woods, for protecting us from the brutal summer sun. 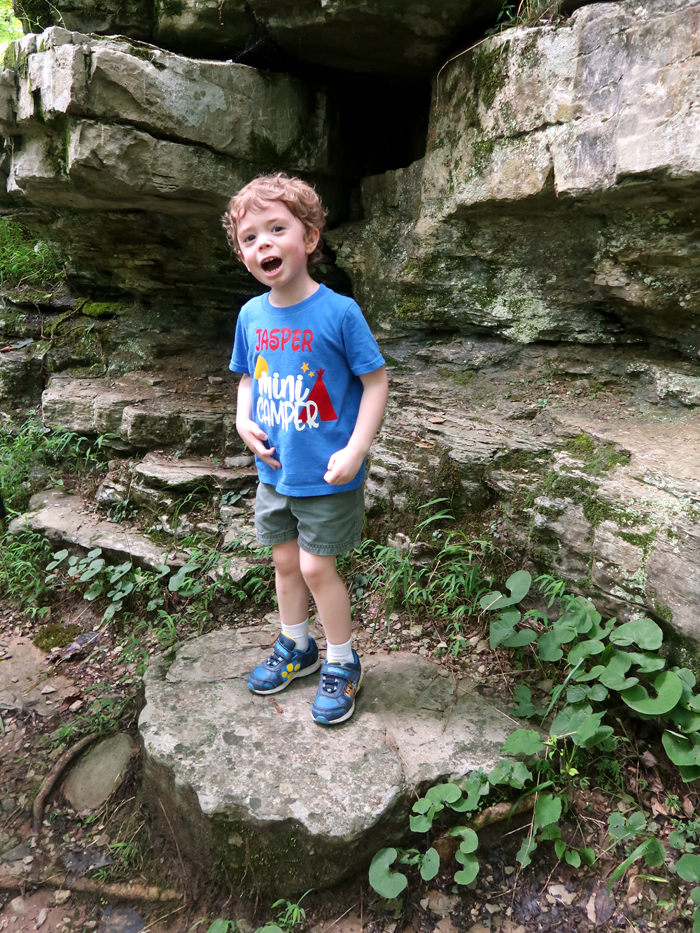 Becoming a hiker and a spelunker all in one day - he was so proud of himself. 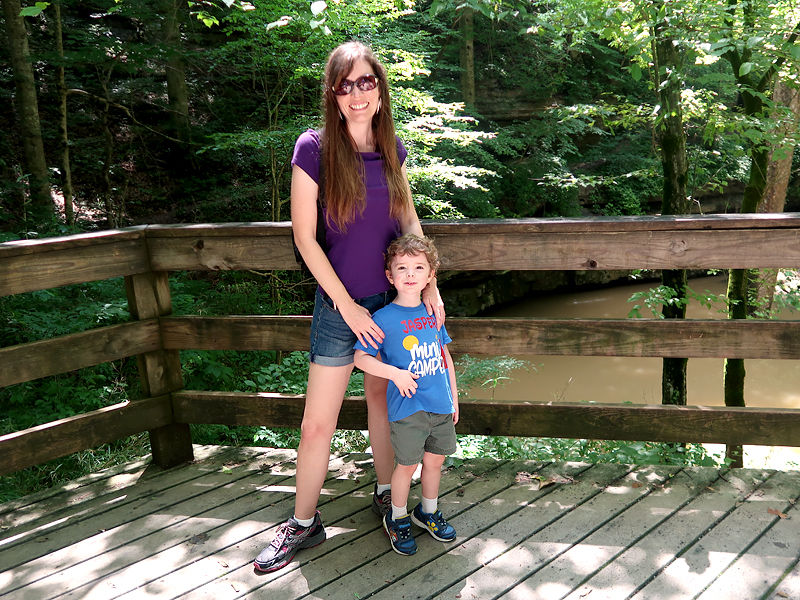 Reaching the area of the spring, we headed down a short boardwalk stretching out to the left to view the spring itself, where groundwater discharges from Mammoth Cave into the Green River. 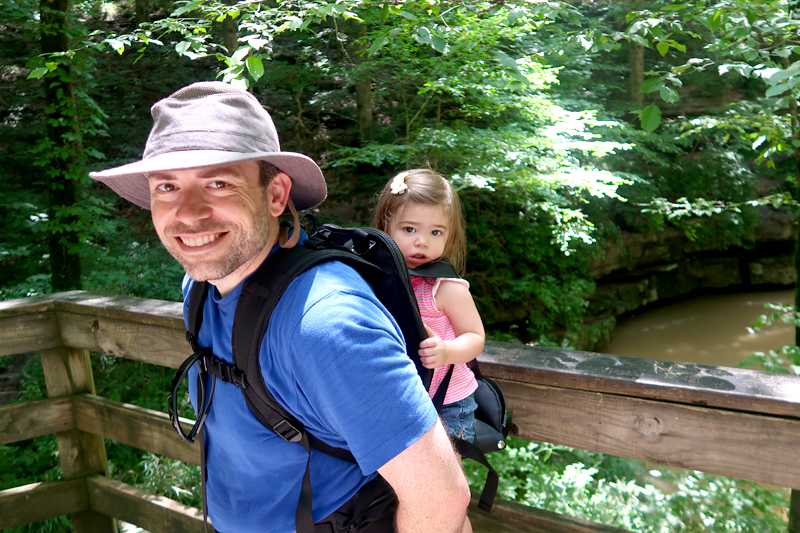 Shelby was just along for the ride this time, but she'll be hiking on foot like Big Brother in no time. 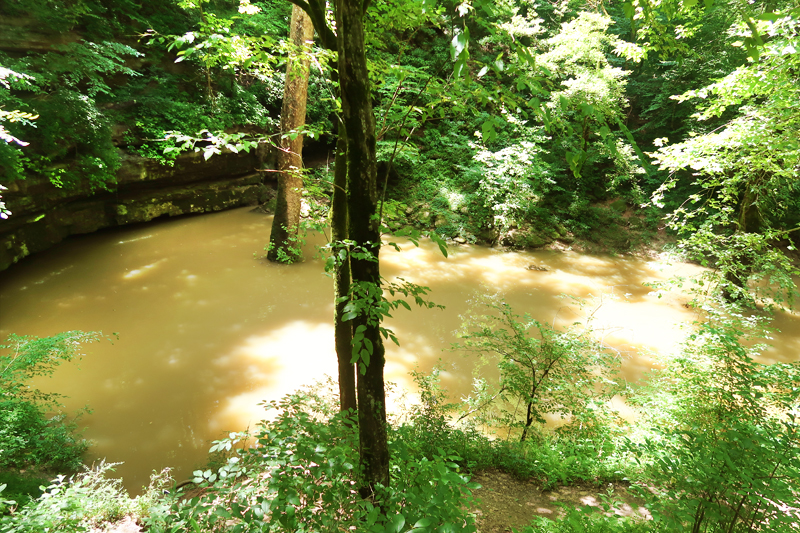 The Green River was high and muddy due to an abundance of rainfall the several days prior.  The water level was almost up to the ledge where the spring empties into the river, seen as the dark area to the left of the above photo.  The scenery wasn't as pretty as it would have been with a lower river, but we enjoyed the pretty hike. 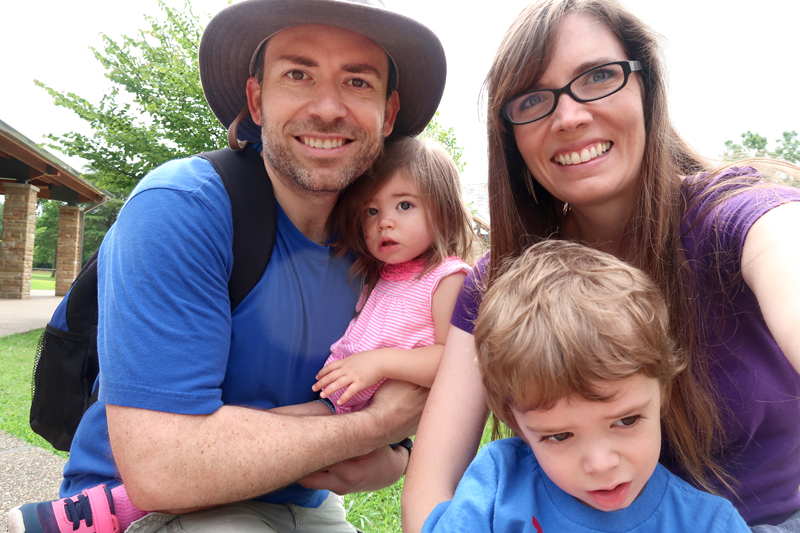 Jasper had been a really good sport through our cave tour to see the Frozen Niagara formation, the hike, and then an ice cream treat at Spelunkers, but after that he was really tired and was ready for an afternoon siesta - we all were!