NOTE:  The photos in this post are from my initial experience with Munchpak in January of 2018.  I have updated the information to reflect Munchpak's current services, but the photos may look different than what the packaging looks like now! 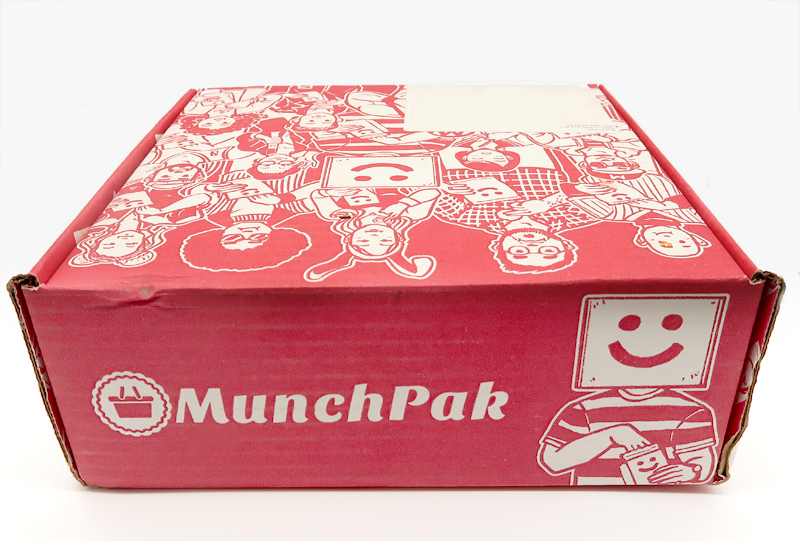 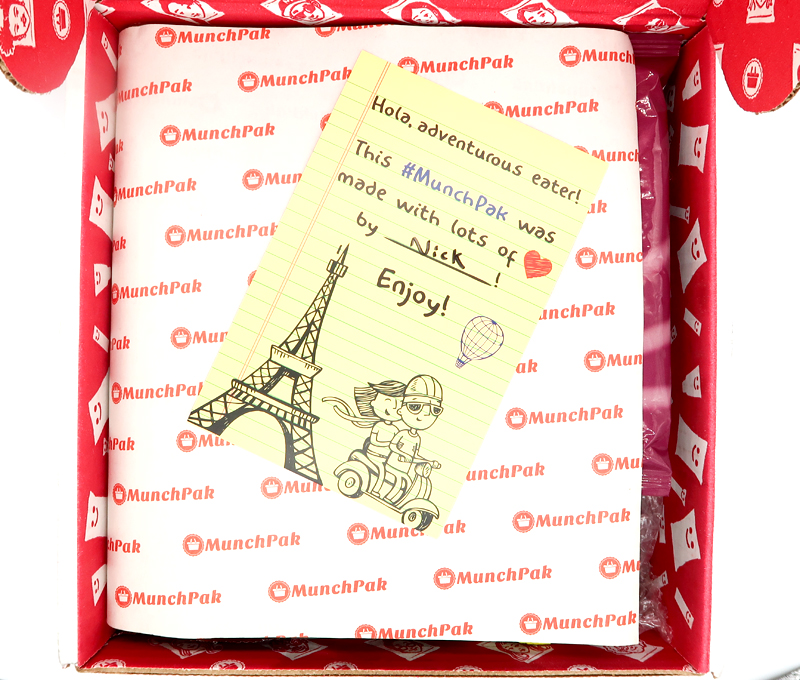 I received the 10-snack box size.  I liked the bright, fun packaging and the first thing I noticed was how heavy the box was when I lifted it off my front porch.  I had no idea what to expect, but I was excited to open it up. 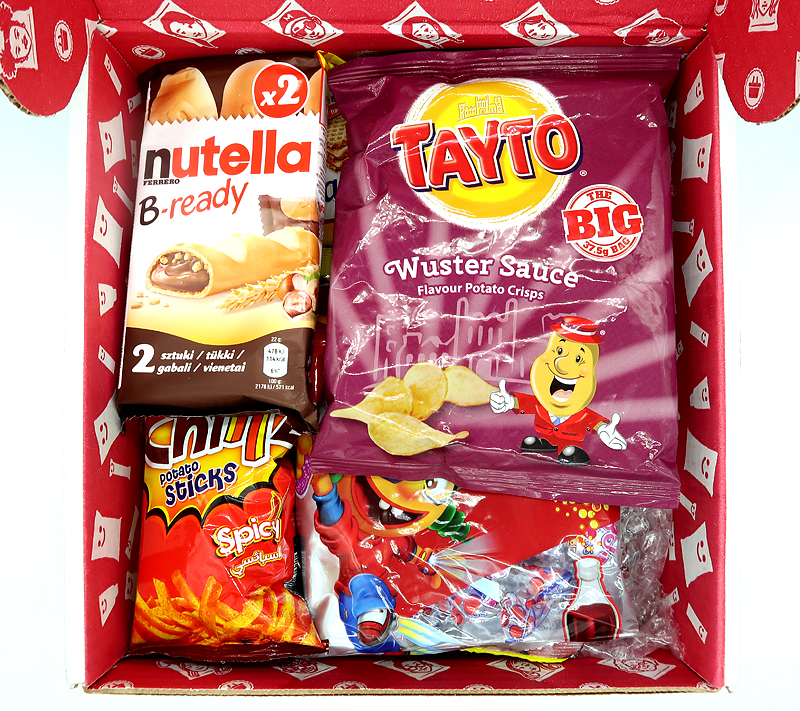 Here's a first peek at the goodies.  The box is packed all the way to the top with snacks. 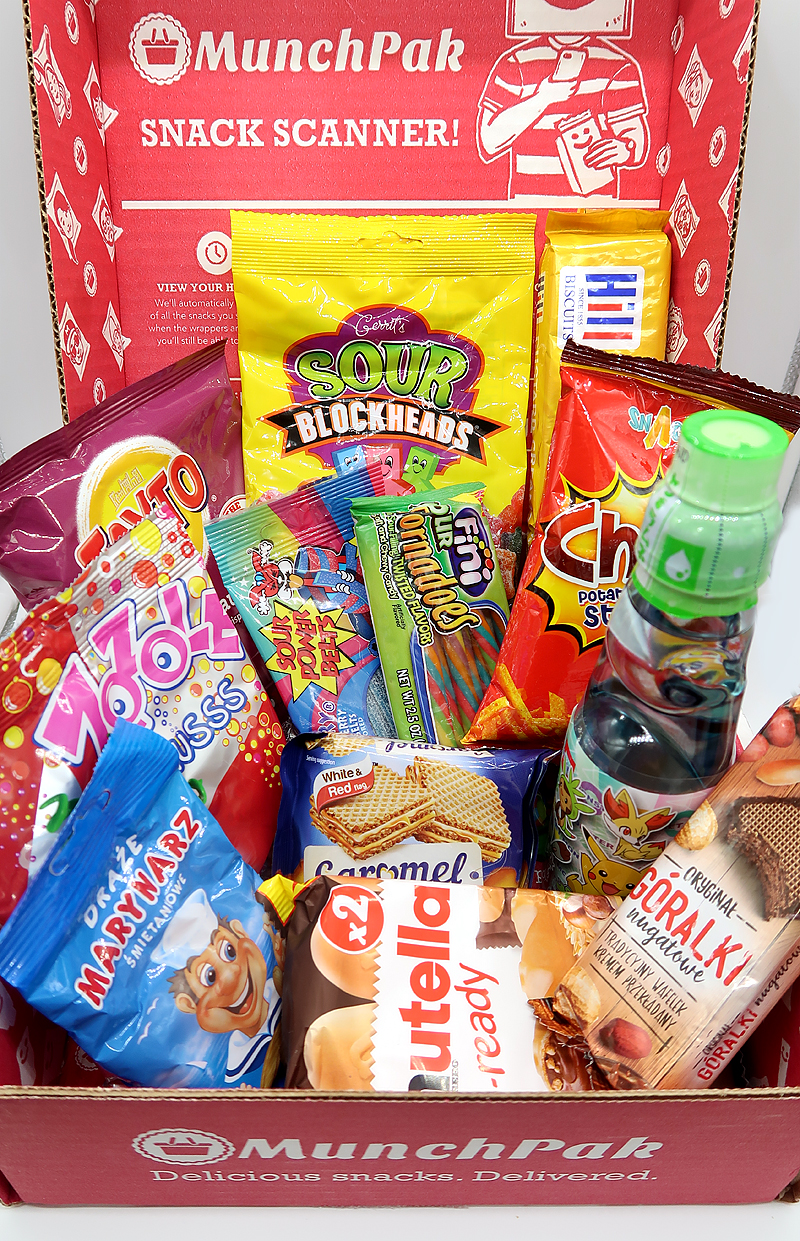 And here's a peek of everything inside. 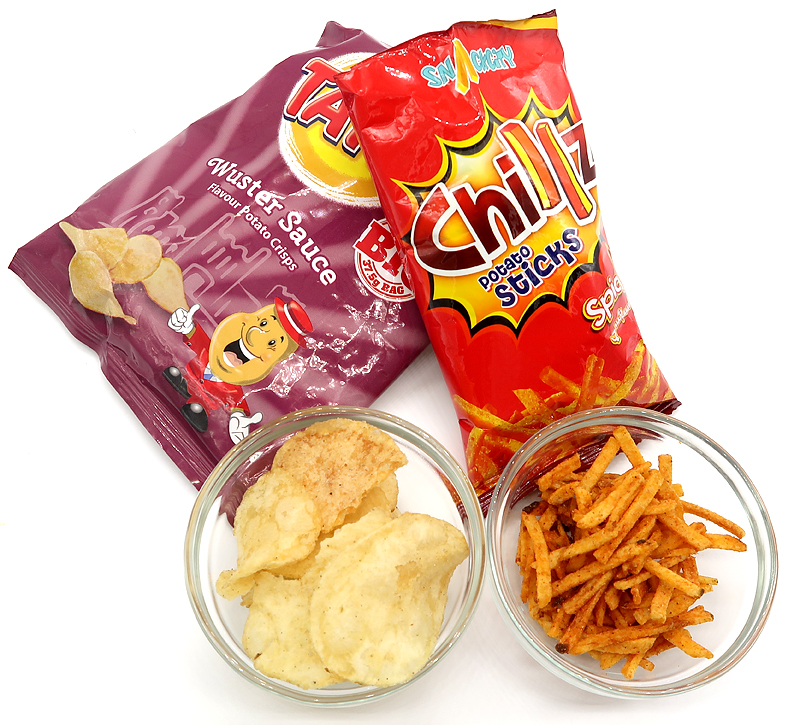 First I went for the savory snacks, of which there were only two.  Tayto Potato Crisps are a product of Ireland and are said to taste like "wuster" sauce.  Though I'm a big fan of Worcestershire sauce, I thought these were overall too salty for my tastes.  Fans of Salt & Vinegar chips may like them.  My toddler, however, loved them, but he hasn't met a chip he doesn't like.  Chillz Spicy Potato Sticks, a Pakistani snack, I liked quite a lot.  The skinny crunchy sticks pack an impressive amount of heat in the spices. 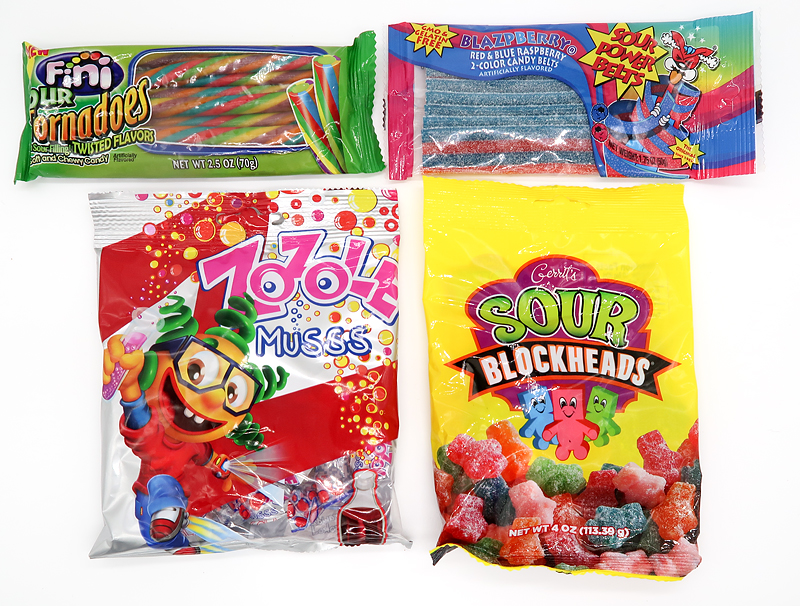 Next I pulled out all of the candy selections.  Luckily I like sour and gummy/chewy candy, since that's ¾ of the candy in the box.  I tasted the Sour Power Belts, from The Netherlands, in blue and red raspberry and was reminded of the texture of Airheads rainbow belts.  The Sour Powers were distinctly sweet on the outside and not too sour on the inside. 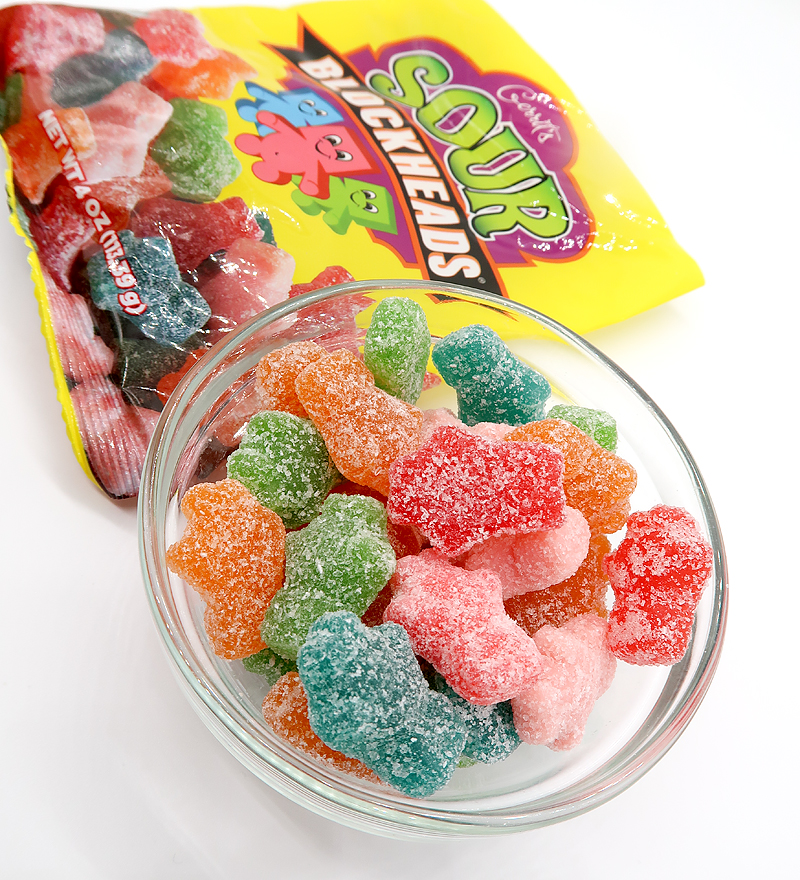 The assorted Sour Blockheads reminded me of Sour Patch Kids, except these were firmer, thicker, and had a vaguely gummy bear shape.  They are REALLY sour.  I liked 'em.  Thumbs up. 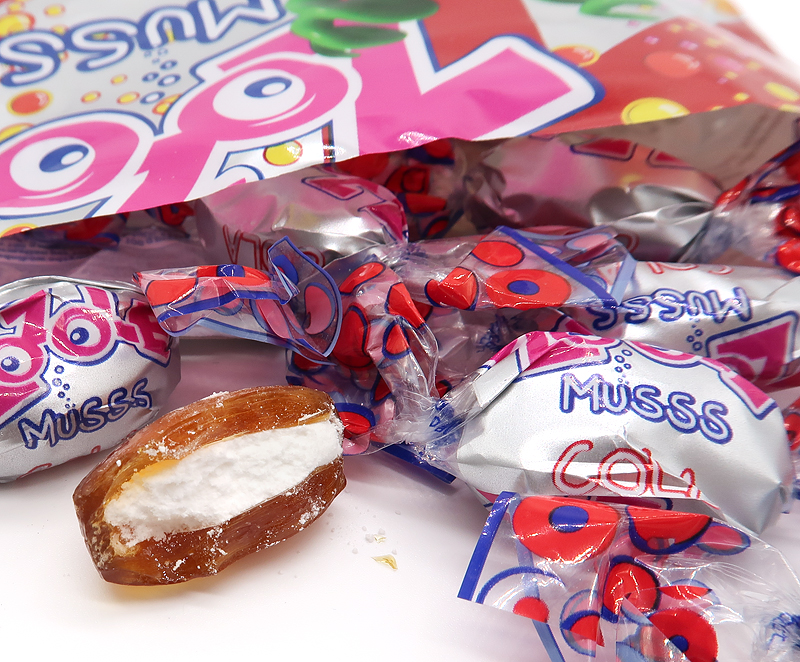 When I saw the package of Zozole Musss Cola Candy my first reaction was "bleh" because in these parts, cola-flavored candy is a disappointing failure. But oh my gosh, these little hard candy drops are amazing!  The outside tastes exactly like cola without any weird chemical aftertastes.  The inside is a strange white powder which is intended to create a "fizz" when eaten, and it does!  The whole effect is just so cool and this was my favorite of the candy options in this Munchpak. 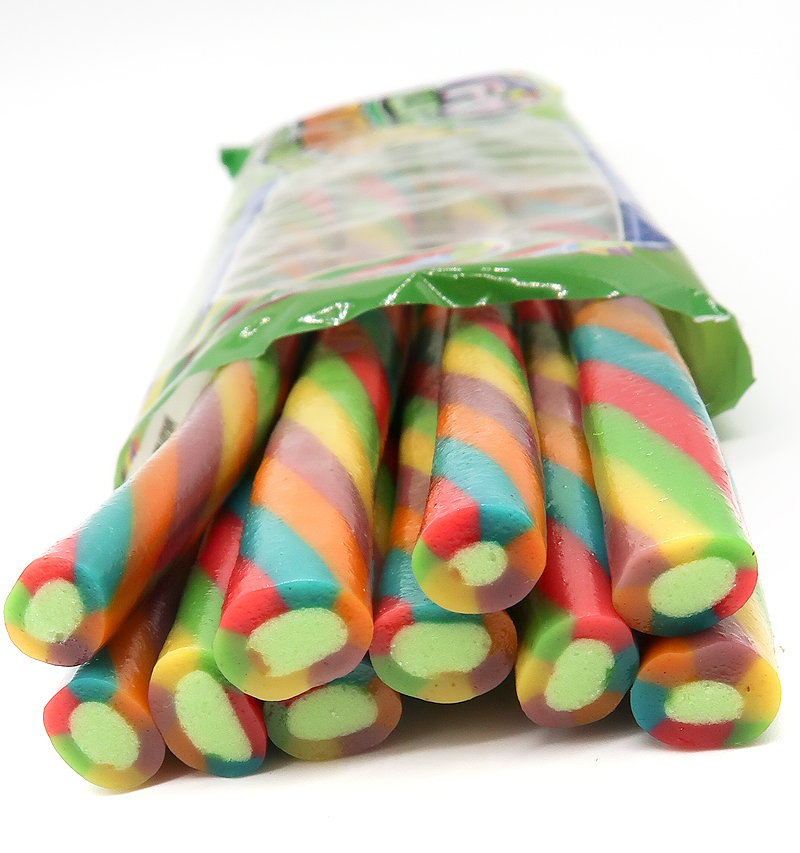 Next was Fini Sour Tornadoes, a candy from Spain described as chewy ropes of twisted flavors with a sour filling.  Gotta be honest, I'll take a pass on these.  They're fun to look at, but the "twisted flavor" of the outside was off-putting, I couldn't even place exactly which fruits it was supposed to be, and the inside wasn't very sour at all.  They ARE cute, though, so they'll go into my baking cabinet to use as decorations for cakes or cupcakes. 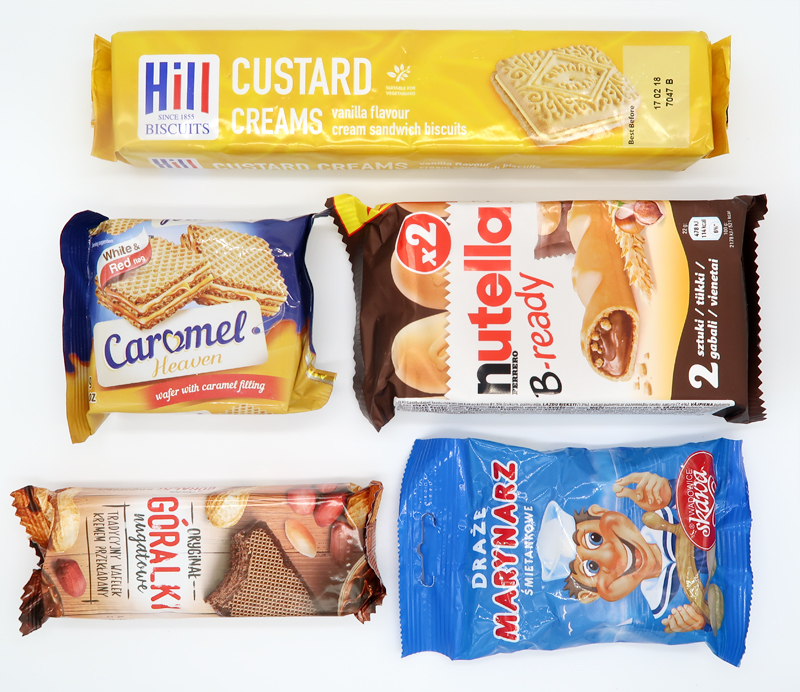 Next I pulled out the sweet snack/dessert items. Ohhh yeah, let's do this. 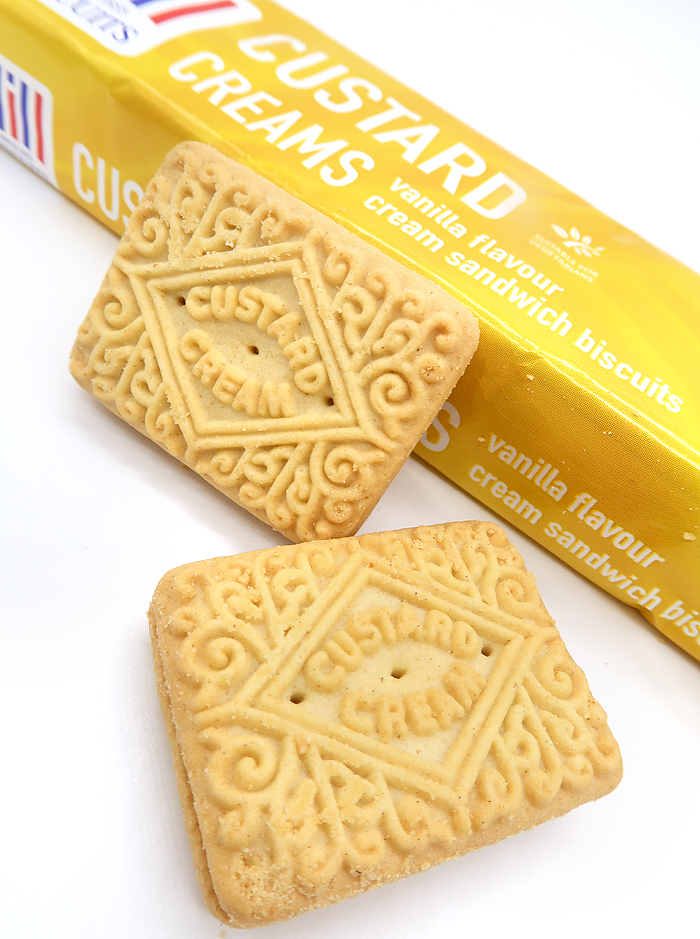 I was giddy to see a package of Custard Creams in my box so I wasted no time tearing into them first.  I was familiar with these as an extremely popular cookie in the UK and have always wanted to try them and see what all the fuss is about.  They remind me of a Golden Oreo but with a more distinct vanilla flavor in the filling.  I hear they are popular for dunking into tea, but we were happy enough to eat them as is.  My daughter went catnip levels of crazy over them. 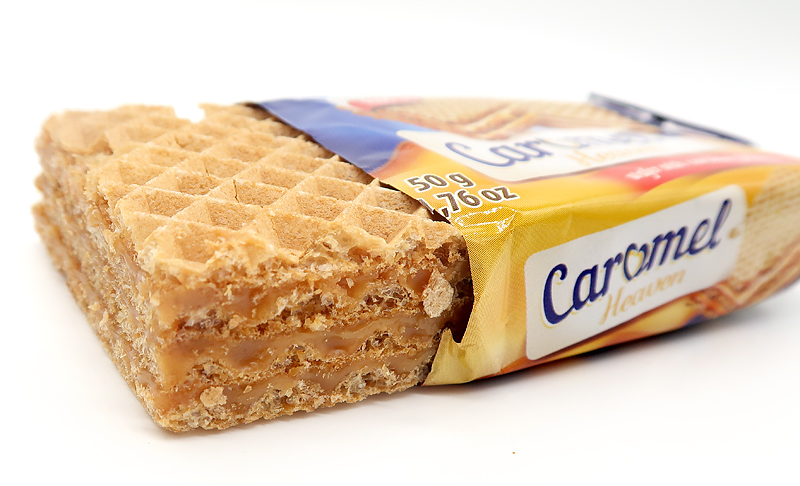 Next was Red & White Flag Caramel Heaven Wafers.  This Polish treat consists of layers of thin wafers filled with a sweet gooey caramel.  I expected the wafers to be crisp, but the caramel softened them into a more chewy texture.  It wasn't unpleasant, just unexpected.  The caramel wasn't overly sticky, as many caramel treats can be difficult to chew.  It had a good flavor. 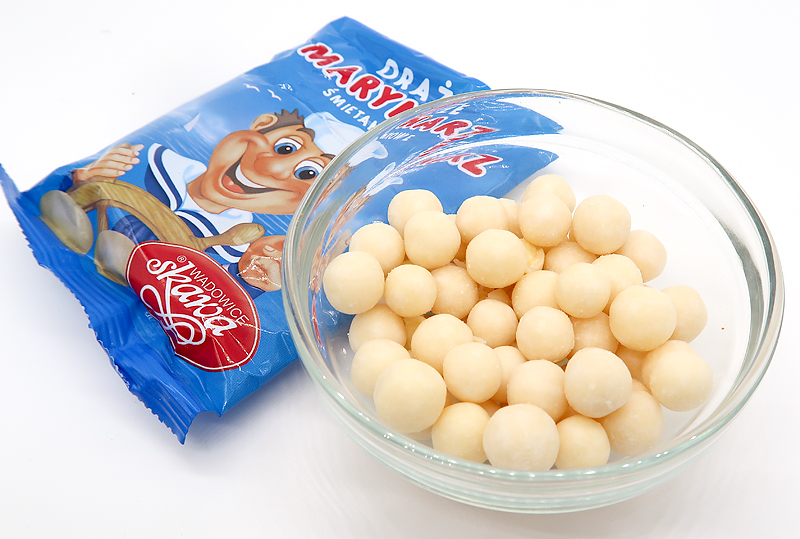 Skawa Draze Marynarz are another Polish treat included in the box.  There's absolutely no English on the package so I went into these totally blind, having no idea what they were or what to expect!  The little round candies taste like small white chocolate truffles.  Maybe I'll keep these around for doling out as potty training bribe treats? 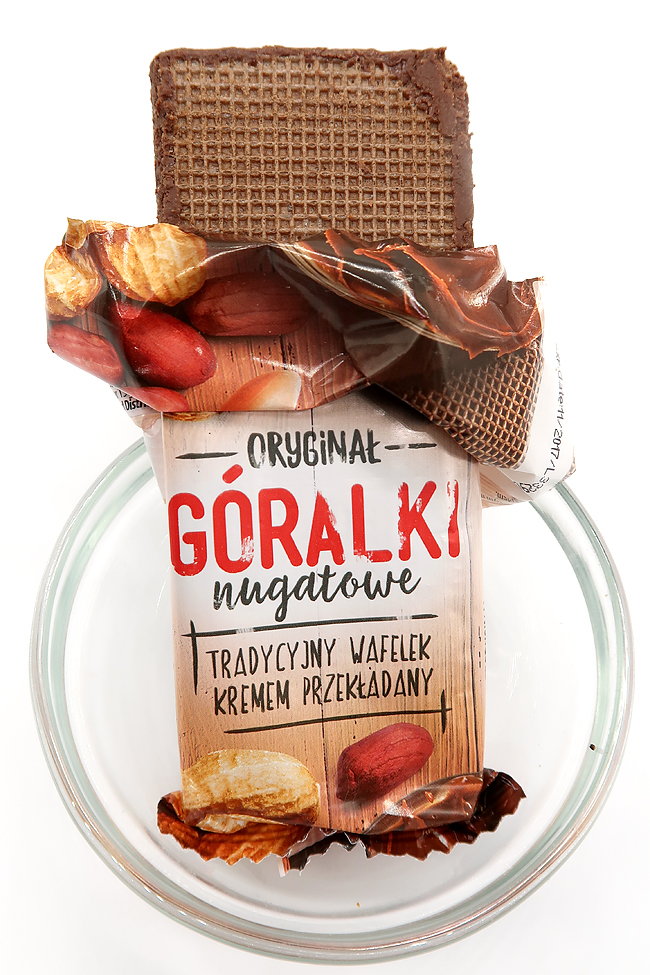 Goralki Nugatowe is another Polish treat and consists of layers of thin crispy chocolate wafers filled with a creamy chocolate nougat and then covered in Polish chocolate.  Aside from the Custard Creams, this was my favorite sweet item in the box. 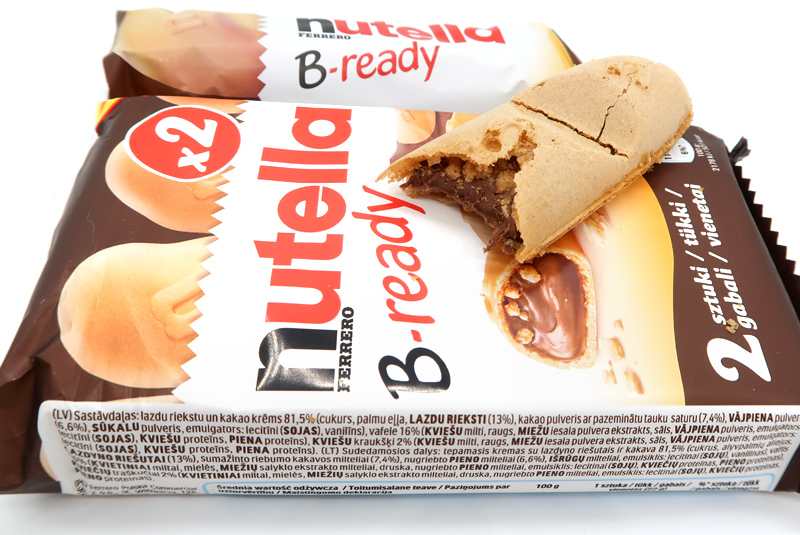 Nutella B-ready is a product that, I believe, is only distributed in Europe.  It consists of hollow wafer sticks filled with Nutella (and who doesn't love Nutella) and some kind of little Hazelnut crispies.  The sticks are meant to be shaped like a baguette... get it?  B-ready... bready? 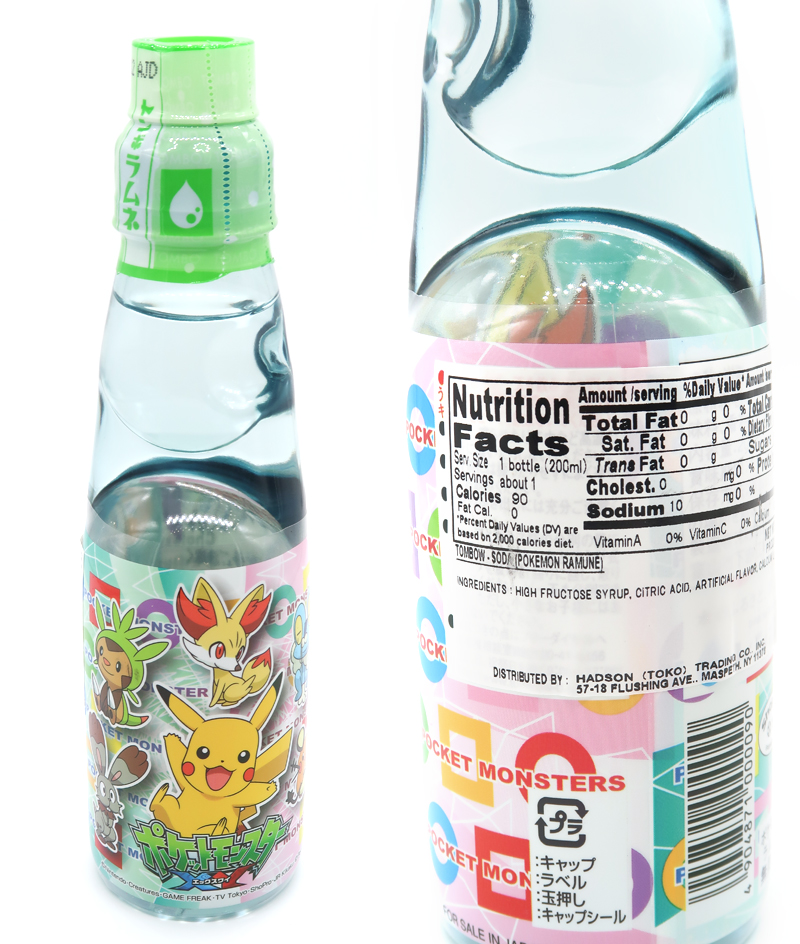 Aha, so this is why the box had so much weight to it!  This is a bottle of Japanese Ramune soda pop.  There is very little English on the package so I'm not sure of the exact flavor.  What makes this soda unique is that it is sealed with a small marble.  To open it, you have to use a built-in plunger to launch the marble into the soda and it kind of activates the carbonation.  My husband likes to collect Japanese items so we will not be opening this one for a taste test.  It's going to go straight into his collection!  I did find a gif on Tumblr that shows the uniqueness of the packaging:

I thought the Munchpak offers a lot of value for the price.  The snacks arrived in perfect condition with no shipping damages.  The items inside were all very interesting and fun to try.  My mid-sized box contained 11 snacks + the Ramune soda and I was happy to uncover some really amazing products such as the Zozole cola candies, the Custard Creams, and the Goralki chocolate wafers.

This is not a sponsored post, though we were sent an Original Munchpak to try and share our opinions with all of you.  Remember our motto: if it sucks, we'll tell ya!