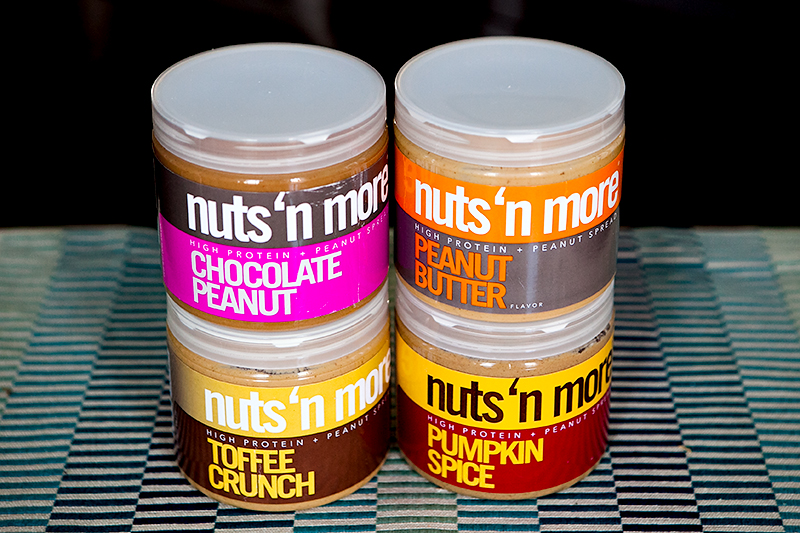 Do you watch Shark Tank?  If so, you might remember Nuts 'n More.  Back in Season 4,  Peter Ferreira, Dennis Iannotti and Neil Cameron pitched their idea of a nut butter that's been combined with whey protein and flaxseed.  The result is a high protein, high fiber, and low sugar spread with a mighty impressive macro nutrient profile.  We use a lot of protein powder and natural nut butters to get some extra protein into our diets as well as some extra taste - protein shakes and peanut butter are just yummy - so a product that boosts the nutritional value of peanut butter even more certainly has my attention. 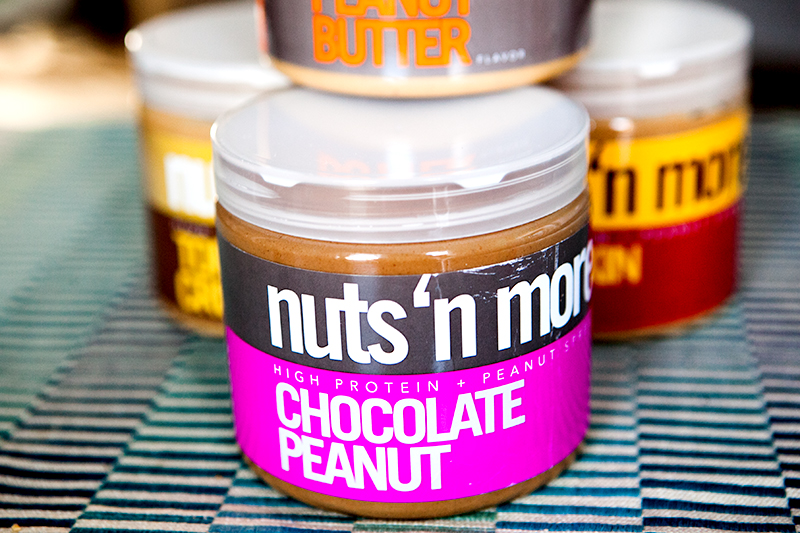 I didn't mess around and reached straight for the chocolate peanut butter.  You can't ever go wrong with this combination. 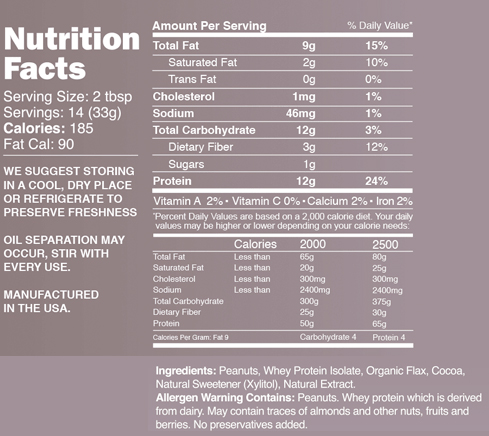 Here's the nutrition label.  All of the peanut butters contain a whomping 12 grams of protein, which is nearly twice that of a 2 tbsp serving of a typical natural peanut butter.  The ingredients list is fairly simple as well.  We have peanuts, the addition of whey protein and flax, the cocoa for that chocolatey goodness, and the natural sweetener Xylitol.  Note for dog owners: I know natural peanut butter is a tasty treat for pups, but Xylitol is extremely toxic to dogs, so make sure your pooch steers clear! 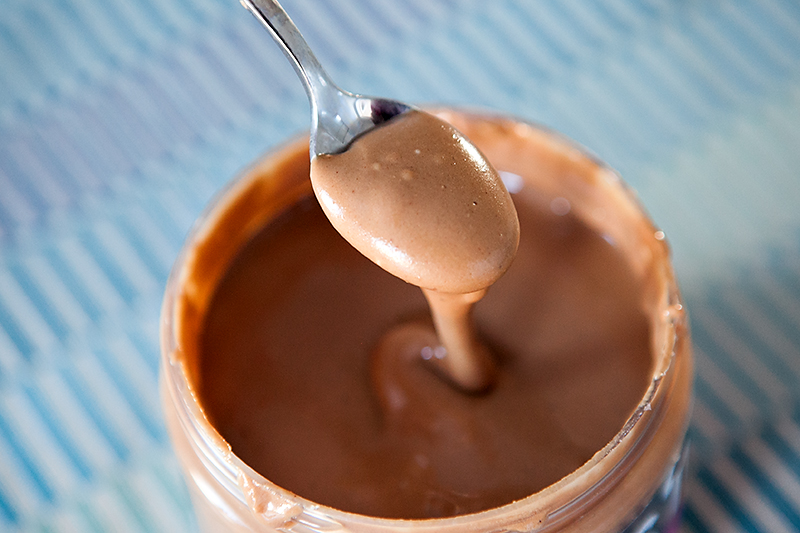 The label says to refrigerate after opening, but since this was my first time rippin' into these jars, my first taste test was done at room temperature.  The color of the butter remained peanut butter-y, which was encouraging.  Usually the main gripe I have with chocolate peanut butters is that there is too much chocolate flavor (yeah, I said it), so much so that the peanut flavor gets lost.  The fact that this still looks like, well, peanut butter, gave me hope that the flavor balance would be spot-on.

Via the label, I was instructed to stir the peanut butter before using because of oil separation.  Ugh, great, another one of those where you spend 20 minutes and get oil all over your counter trying to get the stuff to combine.  Or... not?  When I opened up my jar the separation was minimal and the texture was nice and soft, a few easy stirs and everything was nicely combined. 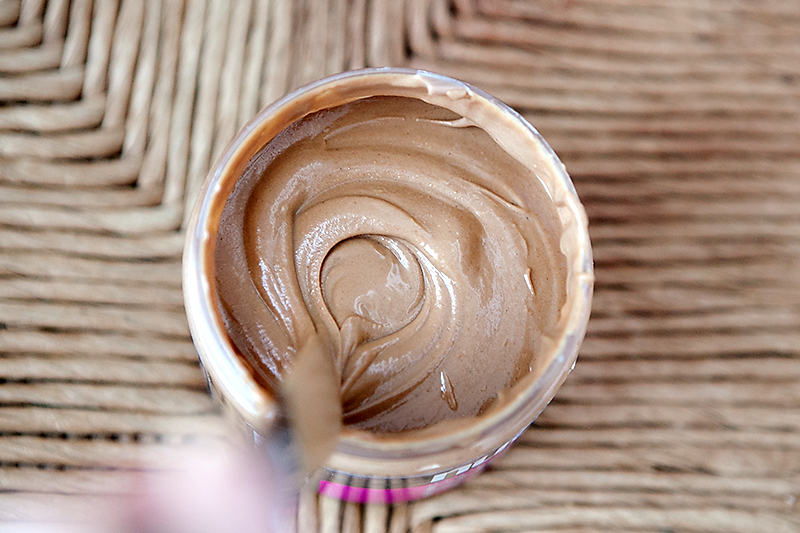 I put a bit of it on a spoon and took a taste and the first thing I noticed was that I was correct in my assumption that the chocolate would not overpower the peanut butter.  It was pretty perfect, in fact.  I got a good mix of peanuts and cocoa.  I was curious about the xylitol, since I've never had that in a nut butter before, but there was no weird aftertaste from it that I could detect.  I suspect that there is very little of the sweetener used, which is good because it doesn't need it.

The next thing I noticed was the unique texture, which was different than any nut butter I have ever had.  It's extra sticky and kind of gets thicker in your mouth as you chew it (is "chew" the right word when describing the consumption of peanut butter?  Eh, I dunno, but you get my point).  The texture's gotta be due to the addition of whey protein.  It tastes just as I would imagine it would if you stirred some protein powder into a plain peanut butter.  I didn't find it unpleasant, but it can take some getting used to if you're expecting the typical texture of a smooth spread.

Gotta say, this is one of the better chocolate peanut butters I've tasted - probably one of my favorites. 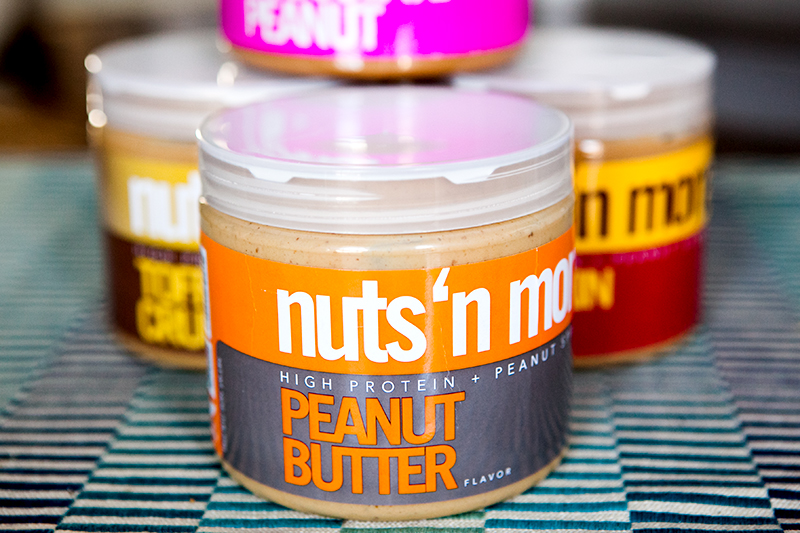 After feeding my impulse to reach for the chocolate first, I followed it up with just the classic peanut butter. 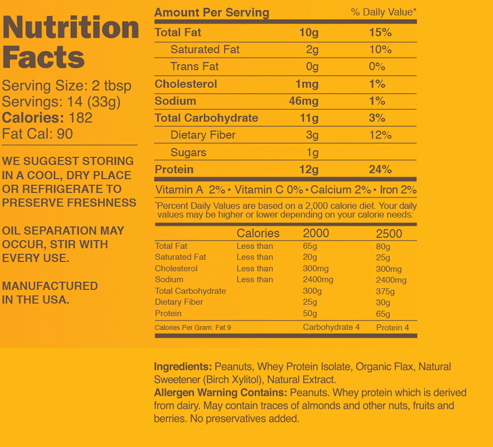 Annnd here's the nutrition label, pretty much the same as the chocolate.  Can I just point out the exactness of the calorie count?  182 calories per serving?  I mean, that's so much more interesting than rounding it off to a nice even 180. 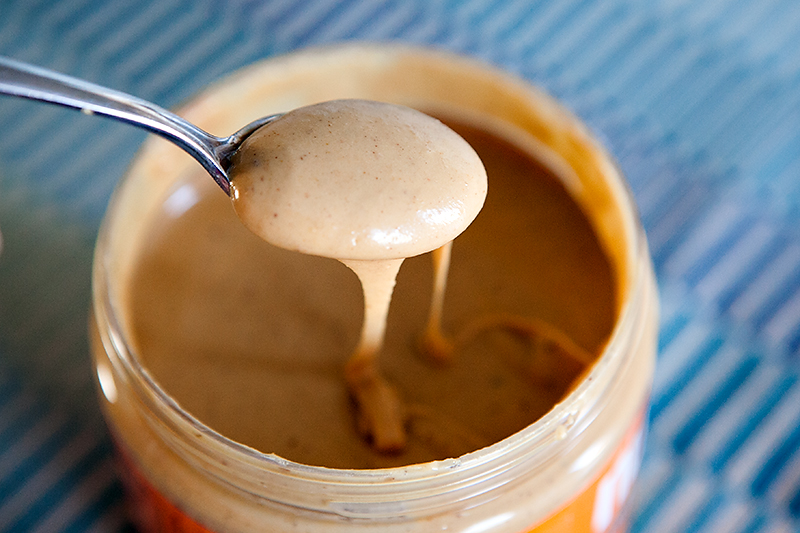 When I opened the jar I found the same smooth consistency, easy to stir and not annoyingly separated from the oil.  The smell was subtle - I had to really stick my schnoz down in there to get a good whiff of peanuts. 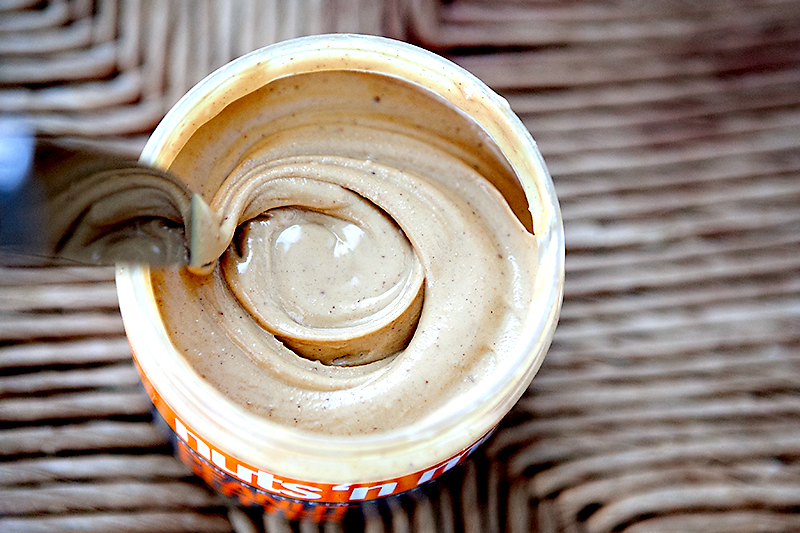 You can see the little peanutty bits in there.  The plain peanut butter seemed a little bit thicker than the chocolate, but the unique texture was the same.  The flavor was good, but this is not likely to be one that I would just eat off of a spoon.  It's a tasty peanut butter, but not the boldest nut flavor that I've ever had.  I wouldn't think twice about putting this into protein shakes or smoothies, baking them into cookies, or spreading them onto pancakes or waffles.  I really do love the protein boost it can add to meals that need a lil' help in that department. 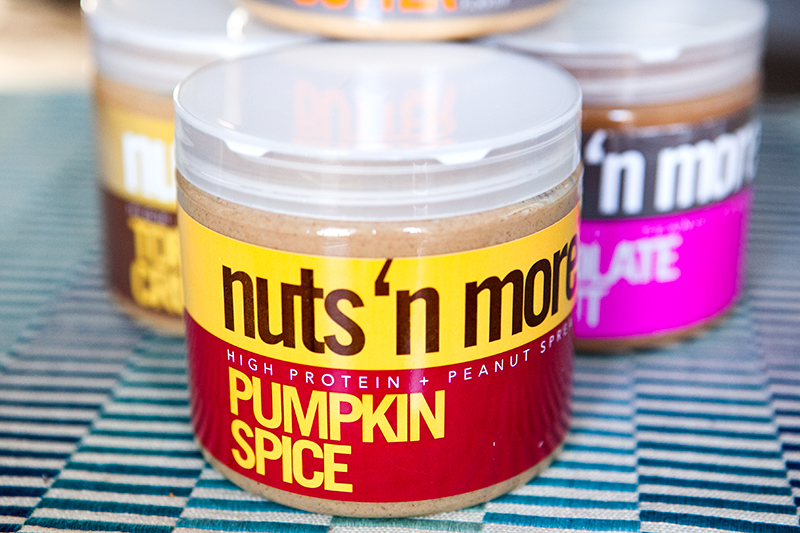 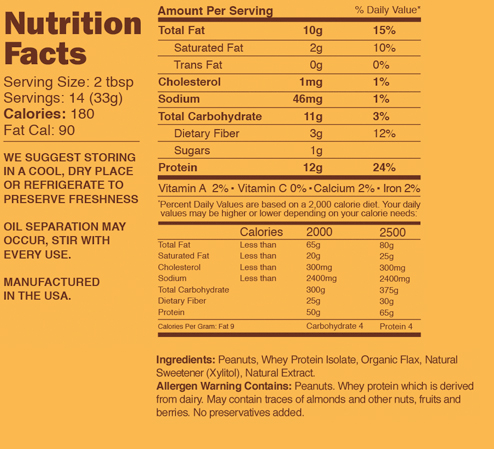 Here be the label - still mostly the same, though I don't see where the pumpkin spice comes into play in the listed ingredients.  Maybe in the natural extract? 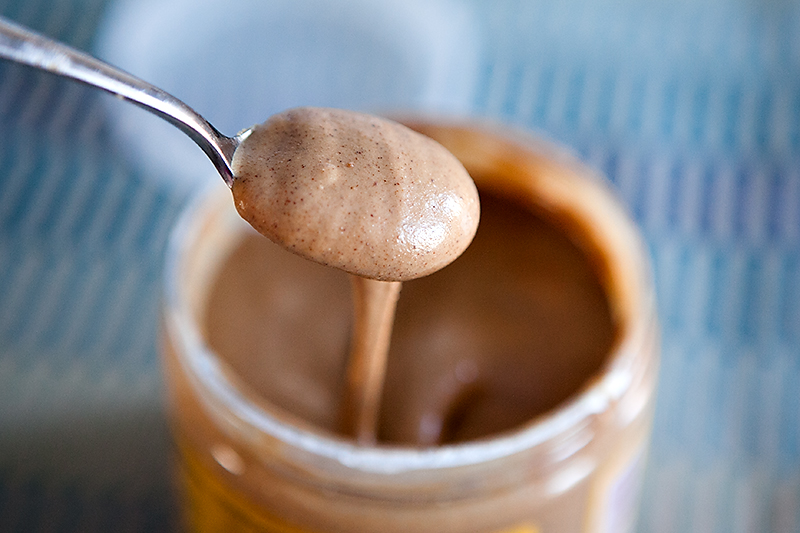 I dipped my lil espresso spoon into the jar and noticed that the pumpkin spice was reflected in the lil' bits you can see sprinkled throughout the butter and in the overall color.  I took a big sniff and yep, smells like fall got married to a jar of peanuts.  I took a taste and thought the spice flavor was really well done - definitely got hits of cinnamon and nutmeg as the major players.  It was really tasty.  In fact, I reflexively plunged my spoon back into the jar for a second taste.  Remember earlier when I said I'd like to spread the plain peanut butter on some pancakes?  Strike that, I want to spread this flavor on some pancakes.  And then throw some chopped pecans on top for good measure.

Scuse me, I think it's time for breakfast... 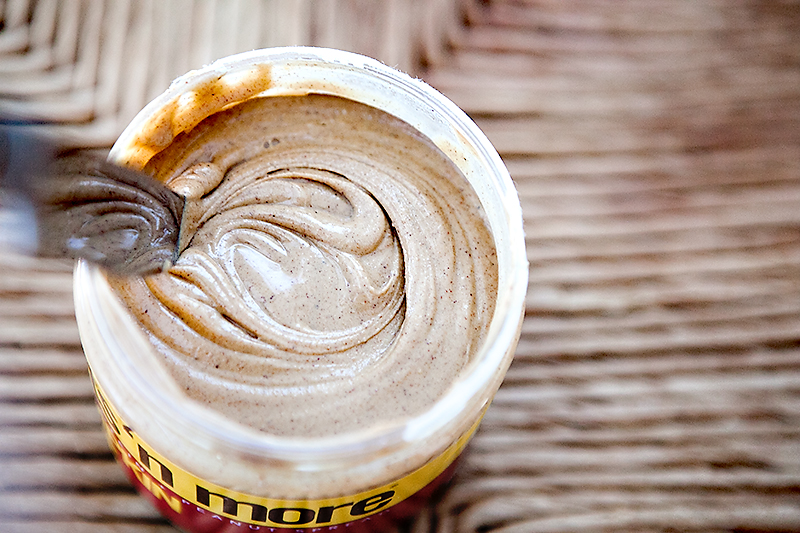 Invariably, there will be someone who tries this and remarks that there is no actual pumpkin in it.  Please, my friends, realize that "pumpkin spice" is not always meant to indicate  actual-meat-from-those-big-orange-squashes-that-pop-up-around-Halloween, but that's certainly what your brain tries to tell you when you taste the traditional combination of spices that are usually included in any kind of sweet pumpkin dish, and that's kinda the point.  Pumpkin spice is what it is - the spices usually combined with pumpkin.  Granted, there will be exceptions.  Take something like... a pumpkin spice muffin.  I immediately expect a muffin baked using actual pumpkin puree and then combined with cinnamon, nutmeg, ginger, cloves, etc.

You know what?  With how ubiquitous the "pumpkin spice" flavor is now, maybe companies should consider  changing around the order of the words.  With my previous example, a "spiced pumpkin muffin" leaves no question that you are indeed getting a PUMPKIN muffin, while a "pumpkin spice muffin" could easily mean you are being served a plain ole muffin that's simply been spiked with cinnamon and nutmeg.  See?  Problem solved.

So, this is definitely pumpkin spice peanut butter, and not spiced pumpkin peanut butter.  Make sense?  Yes?  Good, I knew you all were smart folks. 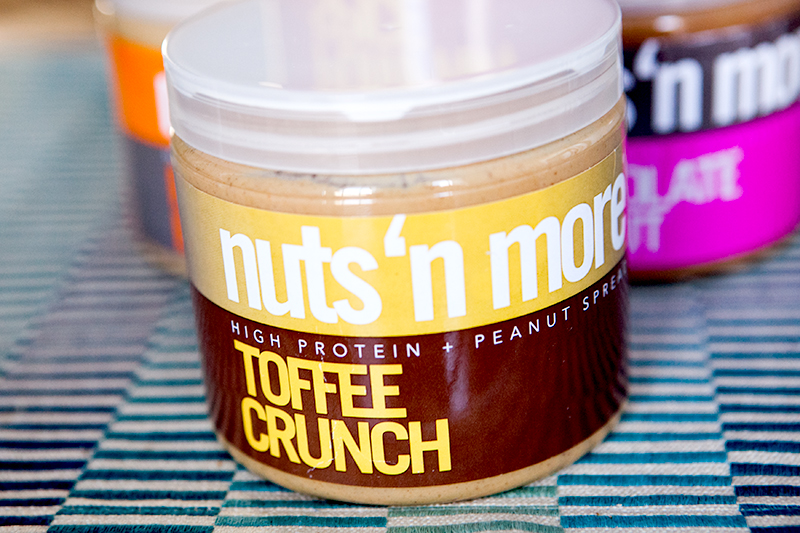 Okay, now we're just boarding the train to Nut Butter Crazytown.  I have never heard of toffee crunch peanut butter before, and I think the idea sounds delightful. 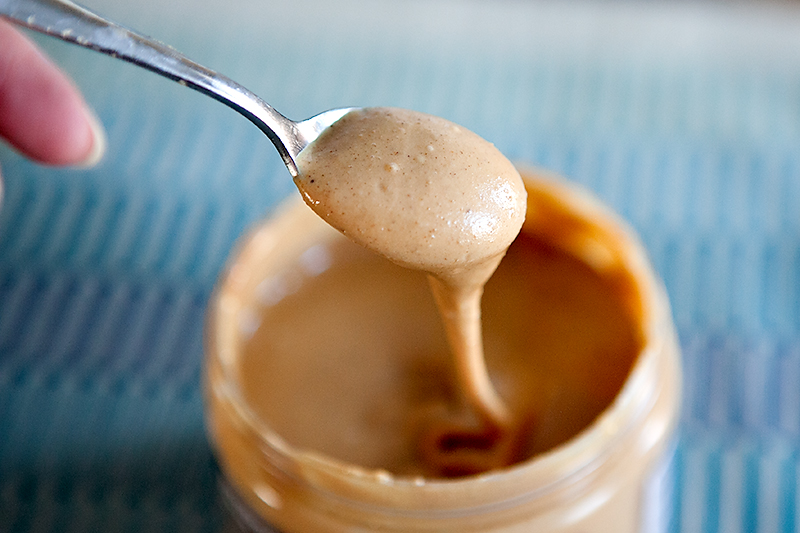 When I peeled off the safety seal I was smacked in the face by the strong toffee smell.  Of the four flavors I tried, toffee crunch was the most aromatic by far.  Yet again, I dipped my little spoon into the jar and found a texture and consistency very similar to the regular peanut butter. 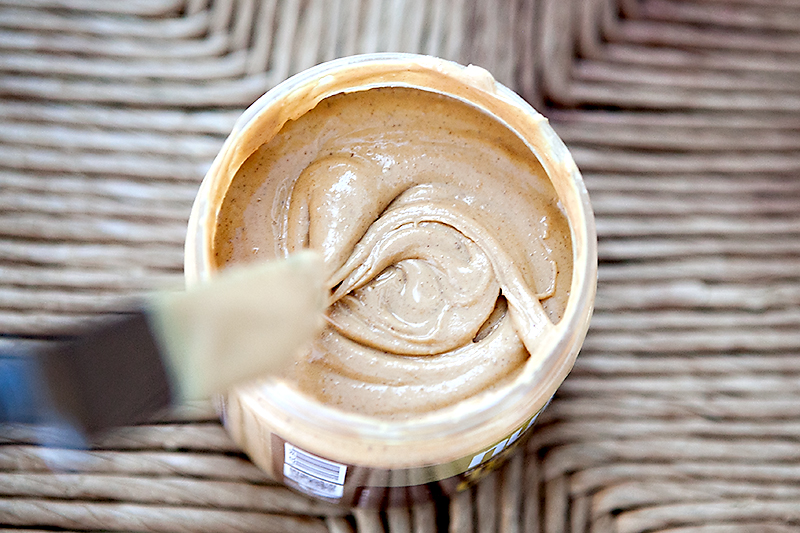 When I took a taste there was a nice and sweet toffee flavor.  This is the sweetest flavor of the bunch.  Due to the name, toffee crunch, I was expecting some crunchy toffee bits, but it's actually completely smooth.  I bet this one would be great paired with bananas - banoffee toast anyone?  How about a banoffee protein shake?  Sounds delicious, but I'll let y'all taste test those combinations for me - I'm not a fan of straight up bananas (I know!)

After refrigerating all four flavors as the label suggests, I can report that all of them remain creamy and spreadable, even directly out of the fridge.  I've been annoyed in the past by refrigerated nut butters that turn hard and chunky after being chilled, so I was very happy about that!

I can recommend giving Nuts 'N More a try, especially if you're looking for a nut butter with a really friendly macro nutrient profile.  My favorite flavors are pumpkin spice and chocolate - I would absolutely buy those flavors again in the future!

I was sent four jars of Nuts 'n More peanut butter to review.  I do not accept compensation or product in return for a positive review - if I think it sucks, I'll tell y'all!