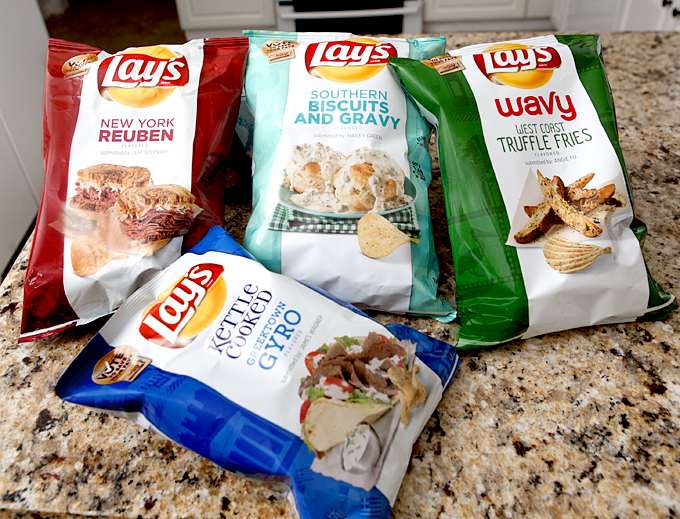 Well, it's that time of the year again, the time when Lay's wades through thousands of fan-submitted suggestions for what the next tantalizing potato chip flavor should be and narrows them down to 4 contestants.  The finalists are then produced and temporarily released to the public for what is the most massive group taste test ever.  Once you've tried them, you're encouraged to head over to the Do Us A Flavor website and cast your vote for the winner.  Once the votes are tallied, the chip left standing will earn a permanent spot on the retail shelves.

This year's finalists were released last week, so I scooped up mid-sized bags of all of them (they sell out surprisingly quickly!) to put them to the test.  This year's finalists are Southern Biscuits and Gravy, Greektown Gyro, West Coast Truffle Fries, and New York Reuben.

I typically post labels for the food that I taste test here at Brownie Bites, but you know what?  I'm not even gonna bother sharing the nutrition facts and ingredients lists for these.  You know they're bad for you, I know they're bad for you.  So let's just accept that these are a fun novelty to try and should obviously not be a regular part of your nutrition.  Okay?  Okay.  Now that we've got that out of the way, let's have some fun.

We sat down for our Very Official and Scientific Taste Test (tm) and thought it would be fun to predict which flavors we would love or hate based on only the name, appearance, and smell.  Here's what happened:

Then we got to tasting! 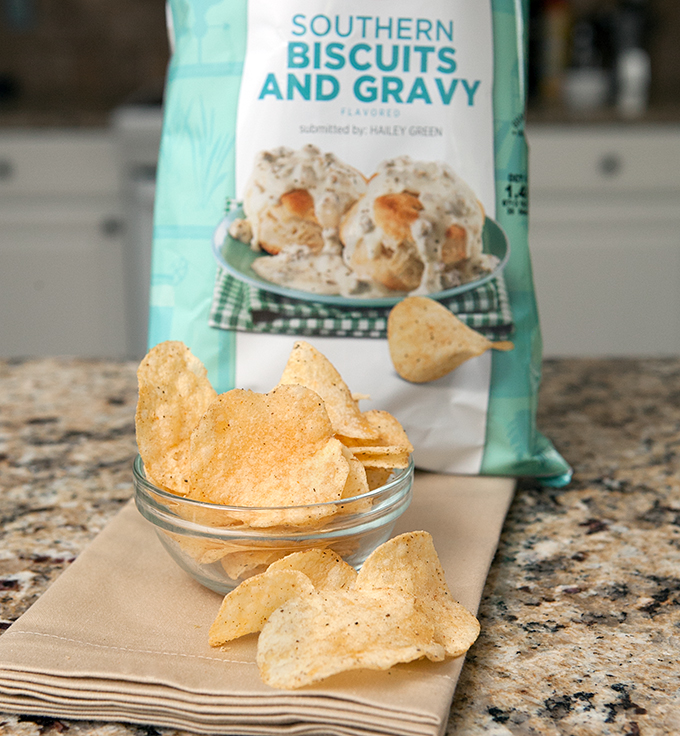 First up was Southern Biscuits and Gravy.  They really came out swinging with the food art on the front of the bag - few things are more glorious and delicious than a plate of tall fluffy biscuits covered in hot white milk gravy chock full of sausage bits.  I was most excited for this flavor and couldn't wait to dig in.  When we did an initial sniff test I could smell sage above all else, which immediately made me think of sausage.  Matt said he couldn't smell anything (I blame that on his lingering cold, maybe?  Because seriously, the sage aroma is unmistakable).

Now for the taste test:

Erin: I easily detected the creamy flavor of the milk gravy with the expected flavor of sage.  Thankfully, I didn't actually identify any sausage flavor itself, which is probably for the best.  I was pleasantly surprised to find that these have a distinct buttery aftertaste that contributes to the biscuit part of the whole deal.  I really liked them.  Were they the best chips I've ever had?  No.  But considering some of the past contestants for Do Us A Flavor have been a straight up "NO THANKS", I could see these being a potential winner.

Matt:  Matt claimed that he could not taste the sage or anything that screamed "gravy" to him.  He described the flavor as a mild sour cream and onion potato chip.  He did agree that the use of the classic style of Lay's potato chip was a good choice since the softer texture works well when you're trying to taste "biscuit" in a chip. 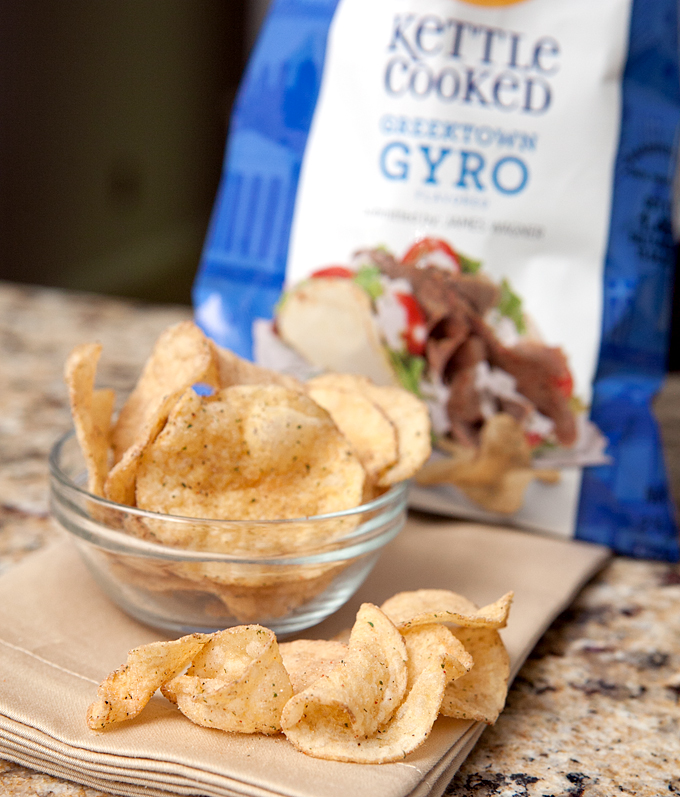 Next up was Greektown Gyro which uses the sturdier and crunchier kettle-cooked chips as a base.  During our initial sniff test I certainly smelled the sour cream and spice combo that screamed tzatziki sauce.  Matt agreed that they have a distinct but general "Greek food" smell which can partly be attributed to the slight tangy aroma of feta cheese that's mingling around in there with all of the other spices.

We crunched into a couple of them and:

Erin: The sour cream flavor came through first and most powerful, followed up by a potent mixture of spices that I'm assuming makes up the "Gyro seasoning" that is so generically stated in the ingredients list.  The vague tangy flavor of feta hit a little bit later.  I'm still torn on whether or not there is actually a hint of lamb flavor in these chips.  Sometimes I could detect it and sometimes I couldn't, but overall these just weren't for me.  The initial sour cream flavor is nice but the late hit by the spices was just a little too overwhelming.

Matt:  He insists that the meaty flavor is front and center and that surely that is what Lay's was going for here.  He even speculated about whether or not these could truly be the first 'meat-flavored chip'.  We both agreed that the kettle-cooked chip base was a wise choice here and worked well with the flavors, but we may be biased because we are both huge gigantic fans of crunchy kettle-cooked chips. 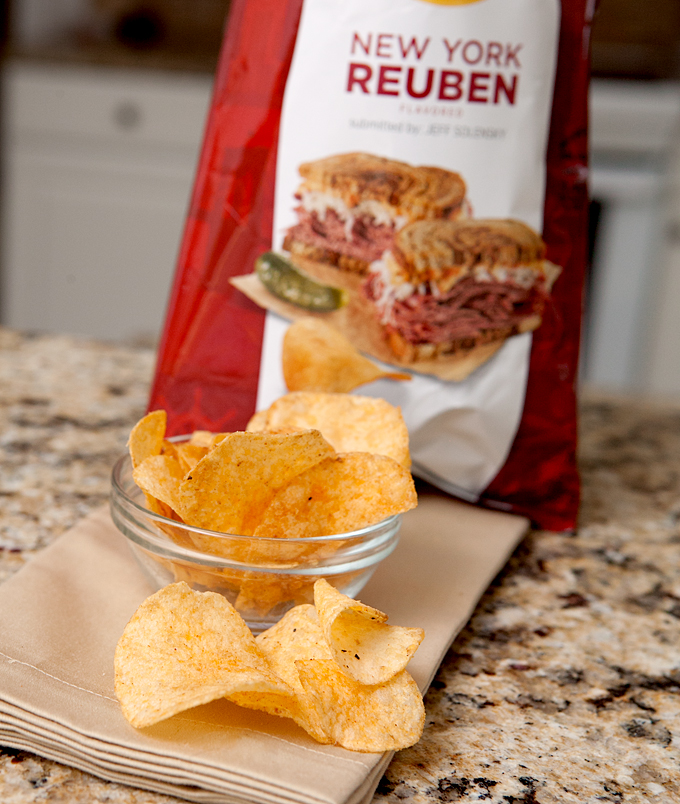 Then it was time to dig in to New York Reuben, which returns to using the classic Lay's potato chip base.  Traditionally, a Reuben sandwich will be made with corned beef, Swiss cheese, sauerkraut, and Russian dressing, and all of that is piled and stuffed between two hearty slices of rye bread.  So... that's a lot of different flavors to pack into a potato chip to accurately convey the flavor of a Reuben sandwich.  Taking a sniff, I thought these had a rather off-putting aroma, like beef that has begun to go bad.  When Matt smelled it, though, he thought that the "soured" smell I was detecting was coming from the sauerkraut, and I think he may be right.

But then it was time to get down to business and taste these babies:

Erin: With the first bite my initial knee-jerk reaction was, "Yuck!"  The sauerkraut flavor smacked me in the face first and then an absolutely overwhelming flavor of rye bread took over and I could taste nothing else.  Now, I have to hand it to them, it tastes exactly like rye bread, so kudos for accuracy.  I took a second bite and started to get a little more of the other flavors in there such as the spice from the dressing and definitely some cheesy notes in there.  I didn't really pick up on any corned beef flavor.  These weren't my favorite, but they did get better with that second bite.  I feel that the strong aftertaste of caraway seed/rye bread would keep me from buying/eating these in the future.

Matt:  Once again, Matt and I disagreed about the presence of a meaty flavor, as he thought the corned beef was quite obvious.  He complimented the accuracy of the combination of all of the many complex flavors that make up a Reuben sandwich and he loved the rye bread flavor on the finish.  He had nothing but good things to say about these.  He even thought the choice of using the classic chip base was wise, while I thought they could have been improved by using the kettle-cooked base. 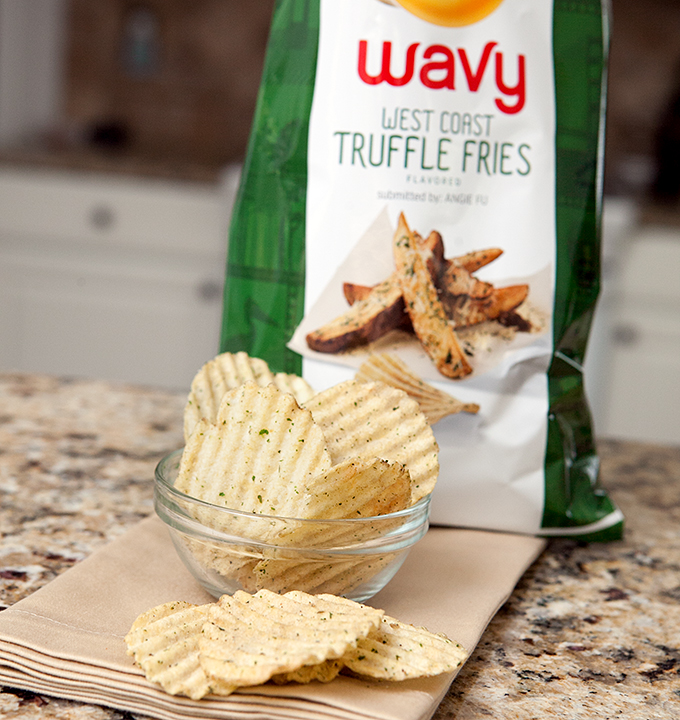 Last but not least was West Coast Truffle Fries.  It's no big secret that truffle fries (or the use of truffle oil in general) are making the rounds as a popular trend in the foodie circuits.  Also, potato chips are just a thinner crispier version of fries, so c'mon, this flavor is kinda cheating juuuust a little bit, because it's already something that would predictably translate well into a potato chip.  Not too much effort needed to make this one work.  West Coast Truffle Fries uses Lay's "Wavy" chip base, which is a thicker chip that's sturdier but not quite as crunchy as the kettle-cooked.  Matt and I took a big sniff and neither of us were very surprised... the smell wasn't all that great, but truffle oil is known for it's slightly off-putting aroma despite how delicious it can be, so we were not deterred.

Erin:  I thought that the wavy chip was the perfect choice here.  The thicker-but-still-soft texture can totally pass as a nice crispy French fry.  These tasted very "grown-up" to me and I was surprised by how much I liked them!  The bold, mature truffle flavor mingling with all of the other spices and just a hint of Parmesan playing around in the background made for an impressive flavor profile in a mainstream brand potato chip.  Oh, and get this, there is actually duck fat listed in the ingredients, which is a common thing to be found in real truffle fries.  Thought that was interesting.

Matt:  It was funny, because when Matt and I started spouting off our comments about this chip, we both used the term "grown-up" at almost the exact same time (jinx!).  Matt mirrored pretty much all of my comments above and said that these were "really darn good".

After trying all of the contestants, it was time to pick our winner!

I was correct that the Reuben would fall into the last place position for me, while Matt was correct that it would land the top spot for him!  West Coast Truffle Fries ended up being the underdog for both of us, however, because neither of us expected to like them as much as we did.  I guess only time will tell which flavor will land a permanent-ish spot on the retail shelves once Lay's reveals the ultimate winner.

Have you tried any of this year's Do Us A Flavor contestants?  What did you think?  I want to know!  Leave me a comment below!