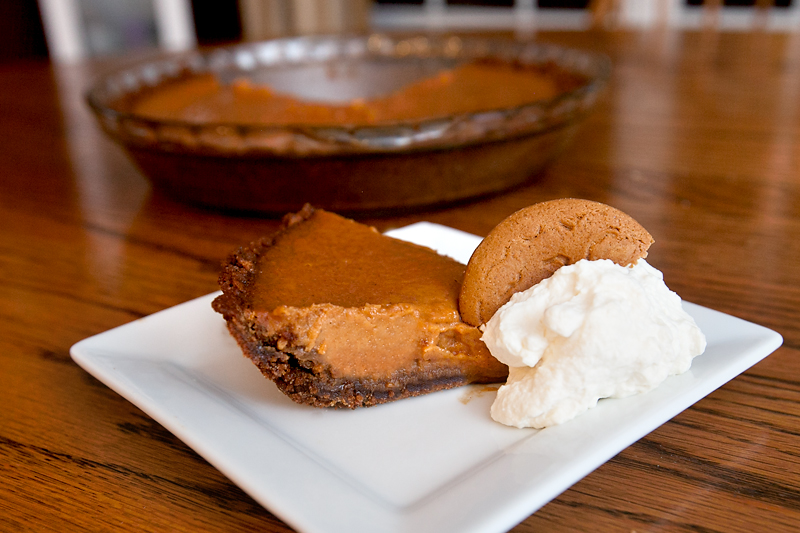 I made this pie two weekends ago, and I was drawn to Alton Brown's recipe for pumpkin pie because of the unique use of crushed ginger snaps in the crust instead of graham crackers.  We both adore the bold, spicy flavor of ginger snaps, so we figured this one would be a real winner.

I did end up making a few alterations to the recipe from the original.  I felt that the amount of ginger snaps used just wasn't enough to get a good thick coating of crust in my entire pie pan, so I increased them.    I also added a lil cinnamon to the pumpkin pie filling for some extra kick.  I understand that the spices in the filling were decreased to make up for the punch-you-in-the-jaw spicy flavor that the ginger snaps add to the crust, but I thought that my addition of cinnamon was not at all overwhelming.  Then again, we LOVE spicy desserts, so you can leave it out if you wish.

Finally, I had a jar of 100% sorghum sitting on my counter from our recent trip to Carver's Apple Orchard and was inspired to whisk some of it into some homemade whipped cream to serve with the pie.  Oh my heck it was incredible!  If you can't find sorghum, regular molasses will do just fine, but I heartily recommend that you give it a try.  It was the perfect finish!