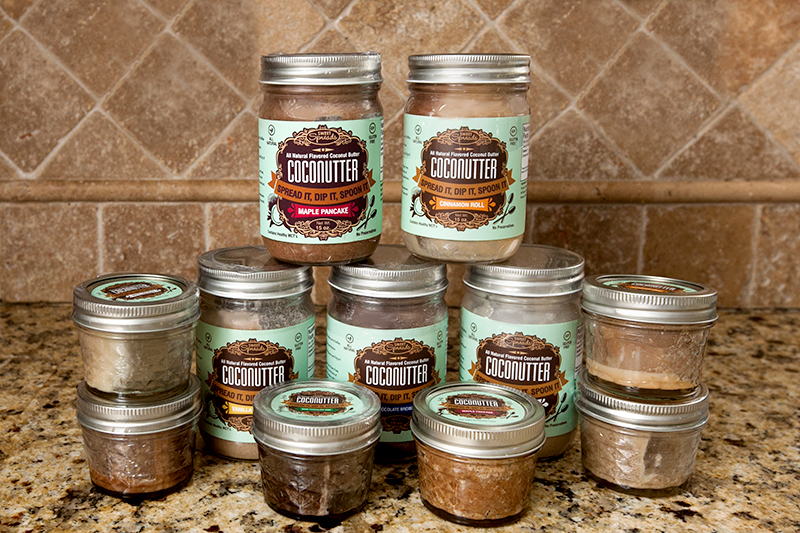 I've been vocal about my love of butters - peanut butter, almond butter, cashew butter, cookie butter, and of course real butter (heh heh).  Last year I discovered something new to me... coconut butter!  Lately, coconut oil is all the rage - the stuff is everywhere and is being recommended for use in just about anything from personal care, household cleaner, and of course cooking and eating!

I'd already been introduced to plain coconut butter in the past, but this year I discovered Sweet Spreads Coconutter, a line of flavored organic coconut butters.  Since most folks are less familiar with this stuff than they are with peanut butter, I figured this might be a helpful post for those wanting to try it out.

What's up with the texture?  Coconut butter has a very different texture than peanut butter at room temperature.  Instead of being smooth and creamy, it starts out more dry and crumbly, though it is subject to the same oil separation as natural nut butters.  Once it is warmed up a bit and stirred, it turns into a spreadable paste.  Warm it up even more and it becomes liquid and you can use it for drizzling or dipping. 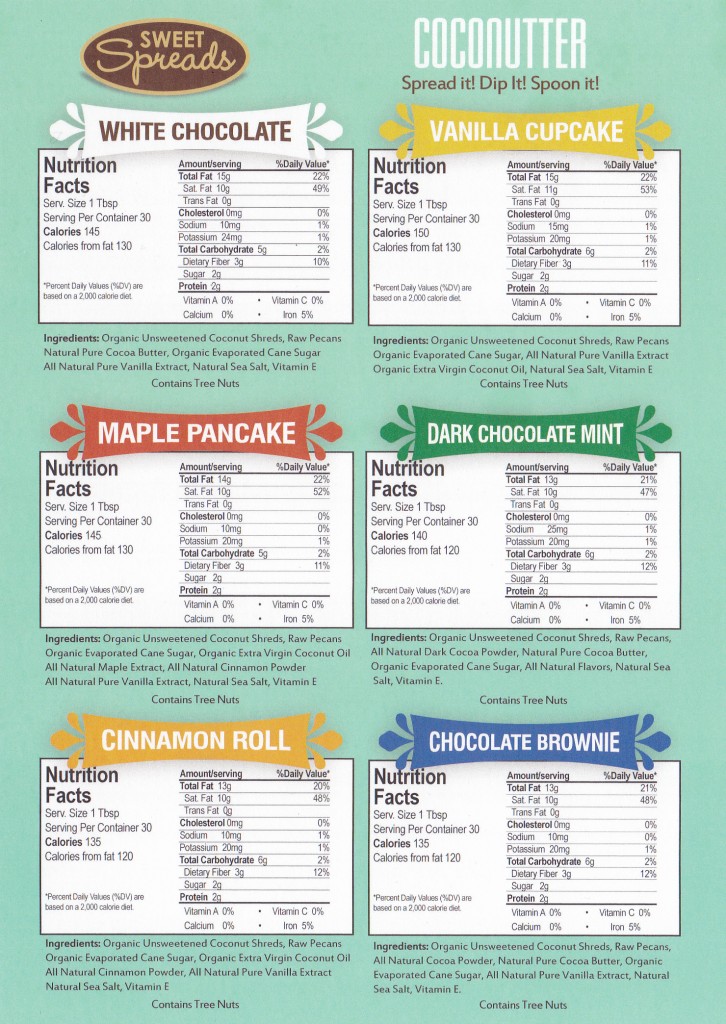 Here's the full Nutrition Facts and ingredient lists for all six flavors of Sweet Spreads.  I need to stress that a little goes a long way with coconut butter.  As you can see, one serving size is half that of regular peanut butter, though it has almost the same number of calories and a higher amount of fat.  We pay very close attention to measuring our serving sizes and I found that I didn't need a full serving when using the butter as a drizzle or as a flavor enhancer.

What can I do with coconut butter? Lots of things, actually!  Here's a generic list of some things you can try with plain coconut butter or with Sweet Spreads Coconutter, but this list is far from complete - use your imagination!

-  Drizzle over fresh fruit.
-  Melt onto pretty much any breakfast carb - pancakes, French toast, waffles, crepes, bagels, muffins, etc.
-  Use in baked goods like cookies, brownies, and cakes.
-  Try it as a flavoring for cake and cupcake frosting.
-  Stir into hot drinks like coffee and cocoa for a non-dairy creamer.
-  Top hot cereals like oatmeal and farina (Cream of Wheat).
-  Melt onto vegetables like sweet potatoes and carrots. 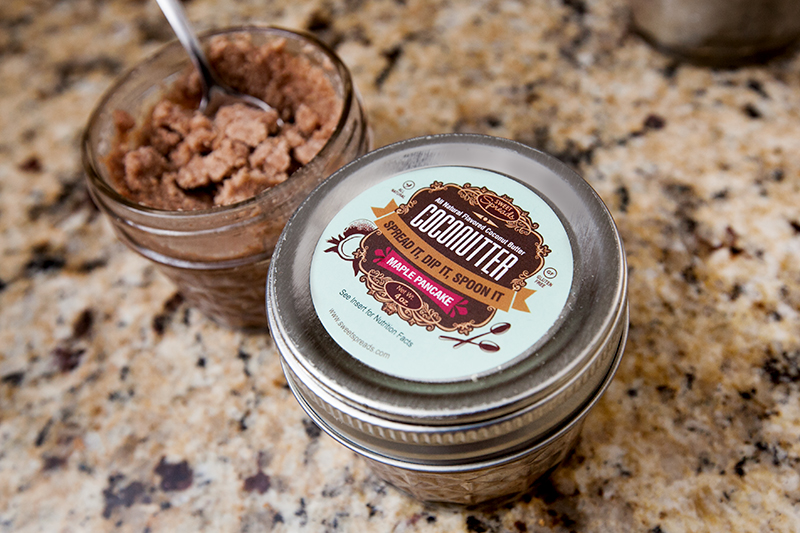 Maple Pancake was the first flavor I tried.  The smell alone nearly knocked me over as soon as I opened the jar - just imagine the aroma of a big snack of pancakes drizzled in maple syrup, and then throw in the fresh scent of raw coconut on top of that.  Divine. 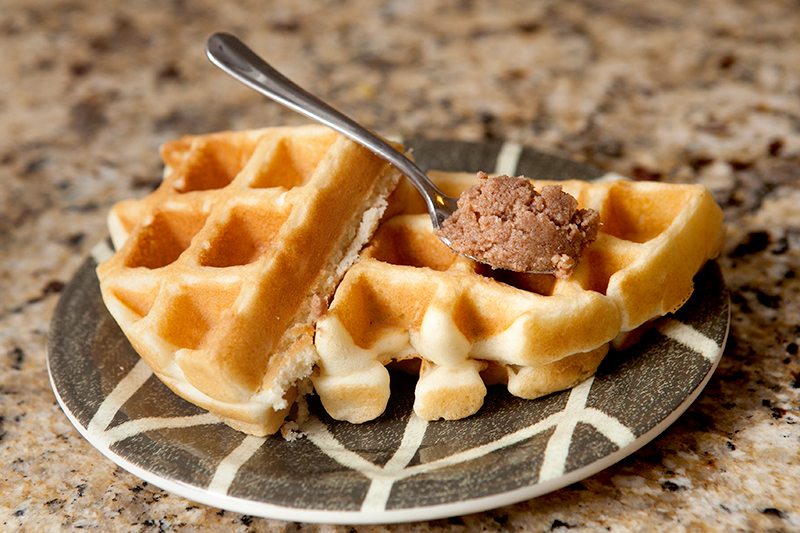 I did the totally obvious thing and tried this on a homemade waffle, since the name itself practically screams that this flavor was made to be eaten with a breakfast food.  Since the waffles were already hot, I just spooned the coconutter right out of the jar and once it was spread onto the waffle it melted nicely.  Soooo good.  For coconut lovers who love the strong full-bodied flavor of coconut but aren't so keen on the texture (I know several people like that!) then coconutter might solve your problems!

Additional ideas for Maple Pancake Coconutter:  You mean other than putting it on every breakfast carb (French toast, waffles, pancakes, crepes...) known to man?  Try it as a topping on a bowl of buttery popcorn - crumble it on or melt and drizzle! 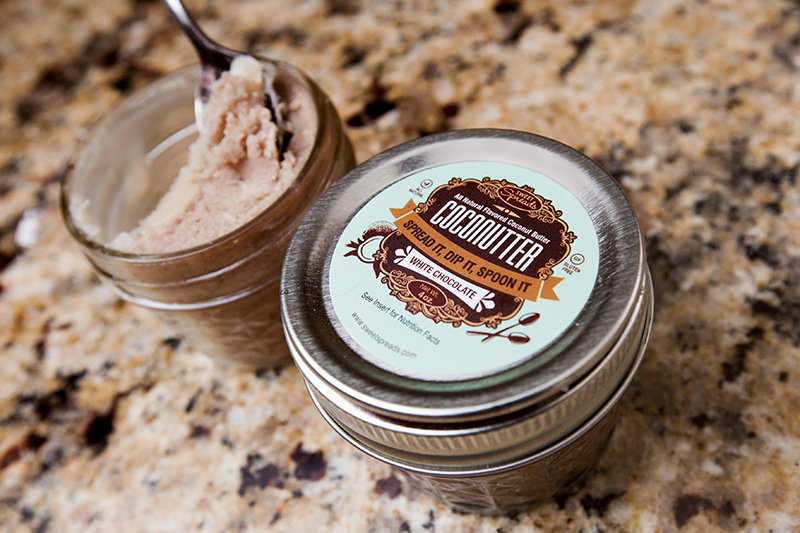 Next up is white chocolate.  I am so so happy that white chocolate seems to be making a heck of a comeback.  It gets a lot of hate, but I have always been a closeted lover of white chocolate.  If given the choice between milk or white chocolate, I will choose white.  Though just 'tween us, I will still choose DARK chocolate over both of those every time!  I've tried white chocolate versions of a couple of different brands of peanut butter and was really interested to see how it performed when paired with coconut.  I took a little taste directly off of a spoon and was not disappointed.  White chocolate is smooth, mild, and creamy all by itself and the coconut is a natural complement.  Both flavors are noticeably present on their own but together it's a winning combo.

Additional ideas for White Chocolate Coconutter:  Amazing drizzled over raspberry muffins or used in a glaze for toasted macadamia nuts. 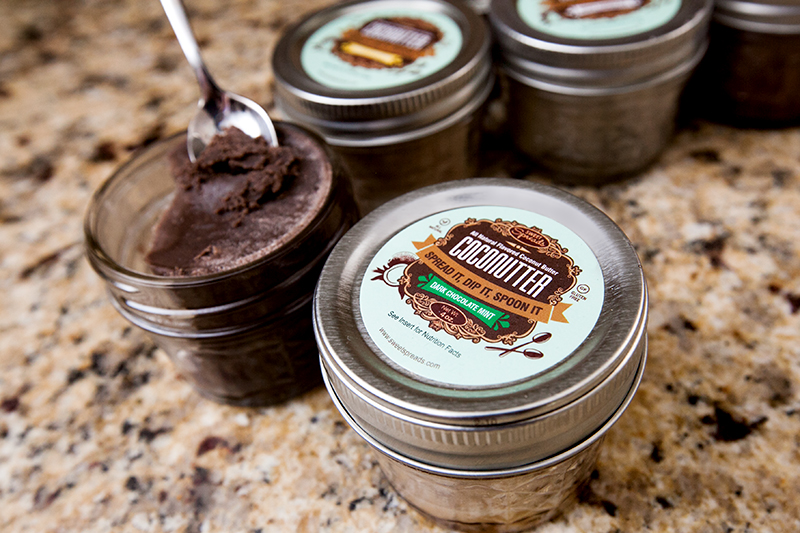 The next flavor I tried was Dark Chocolate Mint.  When I opened up the jar I thought the smell was similar to a Mounds candy bar... chocolate, mint, and coconut.  The semi-sweet dark chocolate paired perfectly with the bold raw coconut flavor and the minty finish rounds out the trio perfectly.  Dangerous stuff, this is.  Delicious, dangerous stuff.

Additional ideas for Dark Chocolate Mint Coconutter:  Try it as a finishing drizzle over a pan of ooey gooey brownies or a warm topping for a big bowl of vanilla bean ice cream. 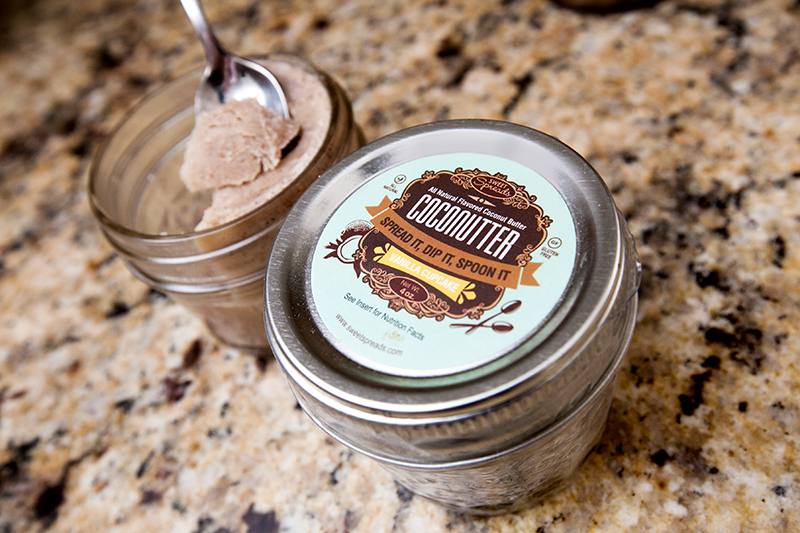 Vanilla Cupcake was next out of the gate.  When I took a big whiff my first thought was, oddly, that I'd love to have a lotion that smells exactly like this!  The vanilla flavor is strong and everything about this combination says "comfort food" to me.  One can never go wrong with good ole vanilla and this is such a basic and versatile flavor of coconutter to have in the pantry - I'd recommend this one to people who are new to the world of coconut butters!

Additional ideas for Vanilla Cupcake Coconutter:  Stir a teaspoon into a big mug of strong, hot coffee or cocoa.  Melt it and brush onto pineapple rings before roasting in the oven. 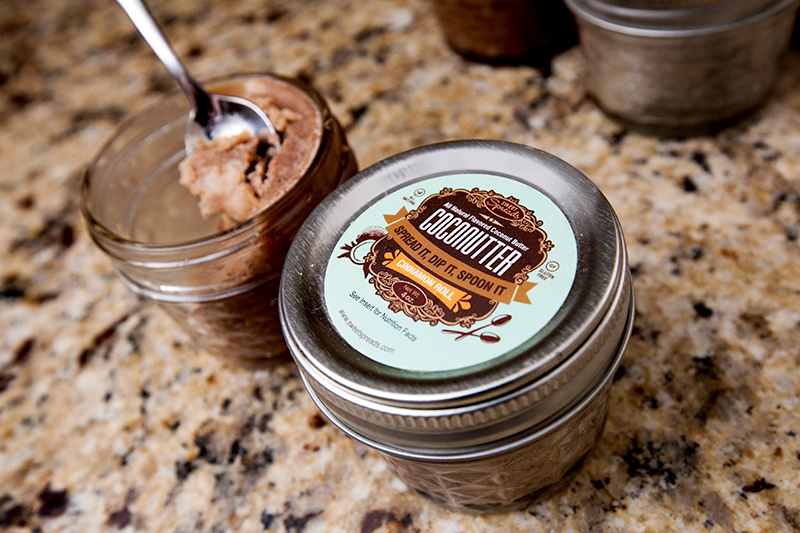 Cinnamon roll is the flavor I find myself using the most often and that's because we eat some form of sweet potato nearly every week.  I love them roasted, baked, mashed, cooked in a skillet with chicken and eggs, you name it.  I often season my sweet potatoes with cinnamon and in the past I've melted plain coconut butter on baked sweet potatoes which was absolutely AMAZING. 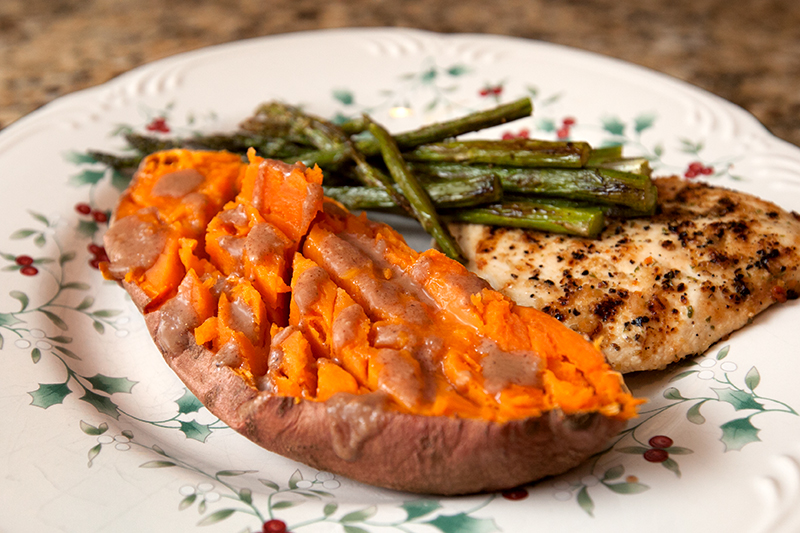 So yeah, I knew that cinnamon roll coconutter would be completely decadent drizzled onto our usual baked sweet potato, and I was right.  Heaven, pure heaven.  I bet maple pancake would also work on a sweet potato!

Additional ideas for Cinnamon Roll Coconutter:  Stir into hot cooked cinnamon apples for an extra coconutty kick.  Use in glaze/icing recipes for actual cinnamon rolls or sticky buns.  Blend into cream cheese frosting and slather it onto a carrot cake! 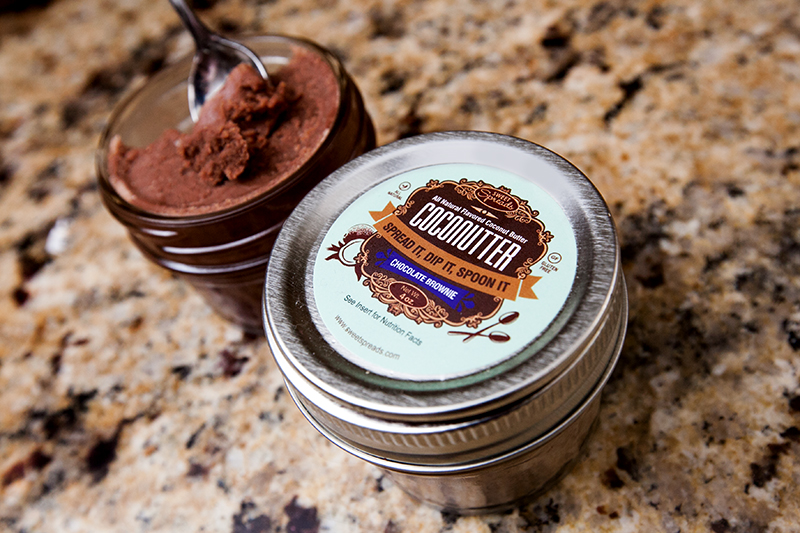 Chocolate Brownie is the flavor I found to be the most versatile when it comes to general snacking.  You can put a small amount on pretty much anything for a quick snack - rice cakes, graham crackers, Ritz, saltines, pretzels, etc.  It's a great dip when warmed up!  It tastes wonderful all by itself - a nice semi-sweet coconutty-chocolate.

Additional ideas for Chocolate Brownie Coconutter: Melt and stir into chocolate pudding for a fun coconut kick to the flavor.  Drizzle over prepared caramel popcorn and allow to dry and set (I need to try this one NOW!). 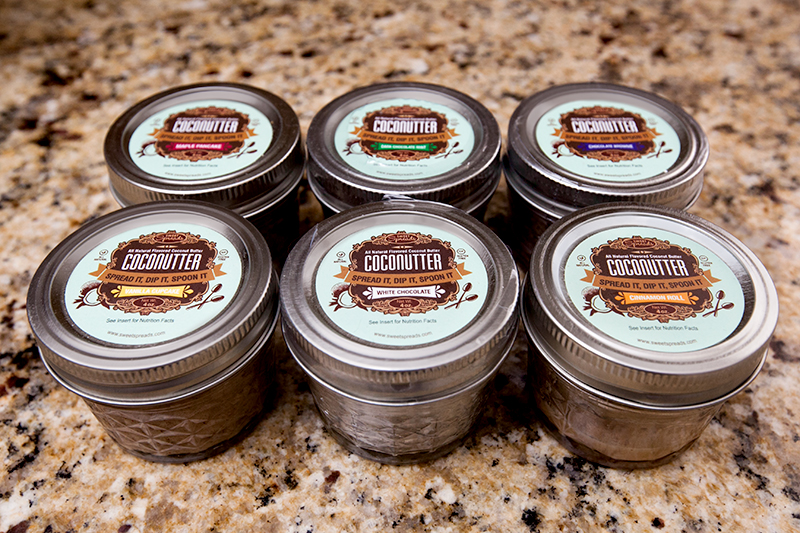 Where to buy Sweet Spreads Coconutter:  Online at sweetspreads.com (worldwide shipping).  You can also pick it up at a limited number of local retailers listed here.

Have you tried coconut butter?  What did you think?  What fun things have you done with it?  Leave a comment and let me know!