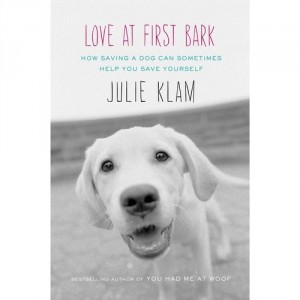 Love at First Bark - How Saving a Dog Can Sometimes Help You Save Yourself, by Julie Klam

Gee, Erin read a book about dogs?  Shocking! Alert the media!  Well, truth is, I actually don't read many books about dogs, and that is because my emotions just cannot handle them.  There's almost always some terribly sad ending for the poor dog (Old Yeller? Where the Red Fern Grows?)  and even if there's not, there's still enough yanking of my heartstrings to reduce me to a blubbering mess (The Incredible Journey?  My Dog Skip?)  And don't even get me started about a little dog named Marley.  Truth be told, I didn't even make it as far as the book.  I saw the movie first and bawled my brains out until I was a red-nosed, puffy-eyed mess, and vowed that I would be in my grave before that book would ever be a member of my personal library.

Heck, my sensitivity to dog-related stories extends to books where the dogs aren't even major players.  For example, let's look at good ole Stephen King - one of my favorite writers of all time.  There I was, 2-ish years ago, plowing through his latest brick (seriously, it was over 1,000 pages long) of a novel, and bam, he introduces a new character.. a friggin elderly Pembroke corgi named Horace.  Not only that, but he gave Horace a voice, making his inner monologue the narrator for entire chapters at a time.  I instantly fell in love with Horace, and instantly wanted to throw the book across the room and never touch it again.  Because it was a Stephen King book.  And in a Stephen King book, there is no predicting what horrors he will unleash upon his characters at any given time.  I read every single page in fear that he would bring some horrible doom upon poor Horace.  I won't tell you if that happened, you'll just have to read the book (Under the Dome), but I'll just say that the fear that harm would come to Horace was stronger than any paranormal concoction that King could cook up.  Anyway, I'll stop rambling and get back to the point of this post!

When BlogHer asked me to review this book, I was a little nervous.  When my eyes had misted over within the first 10 minutes of sitting down to read, I knew I might be in trouble.  The story opens with Julie and her husband Paul rescuing an abandoned pit bull with cigarette burns on his paws.  He had been left tied up in a Manhattan neighborhood on a blistering hot day and was starving and thirsty.  The book follows Julie's efforts in dog rescue and fostering unwanted pooches in Manhattan, where she lives with her husband and 3 unruly Boston Terriers, and New Orleans, where they have friends involved in post-Katrina rescue efforts.

For the general novel reader, this book may seem a bit dry.  For dog lovers, you'll love it, though it will make you want to head down to your local shelter and adopt a poor unwanted dog, take him home, and love him forever and ever.   Personally, I found this to be an enjoyable read.  It was extremely short ( <200 pages) and I found myself giggling and sympathizing with the author as she detailed her struggles with potty accidents, leash walks from hell, and rampant barking (oh God.. the barking!)  But even though she struggled with maintaining "pack leader" status with her 3 nutty terriers in a small NYC apartment, she never turned down the opportunity to temporarily foster a dog in need, especially those in danger of of being gassed at too-full city shelters.

Her stories of dog rescue took her to New Orleans, where she ran through swamps and brambles and even dove under a train to save a feral dog with a big mayonnaise jar stuck on his head (I felt terrible for the dog, but I admit that I giggled when picturing the poor thing in his makeshift space helmet).  Matt and I have always said we want to be more involved in the dog rescue community, and reading about Julie's personal stories and experiences have only inspired me to make more of an effort to make a difference in even one homeless dog's life.   I would certainly recommend this book to anyone who is passionate about dogs, and at such a short length, there's really no reason not to give this one a try.