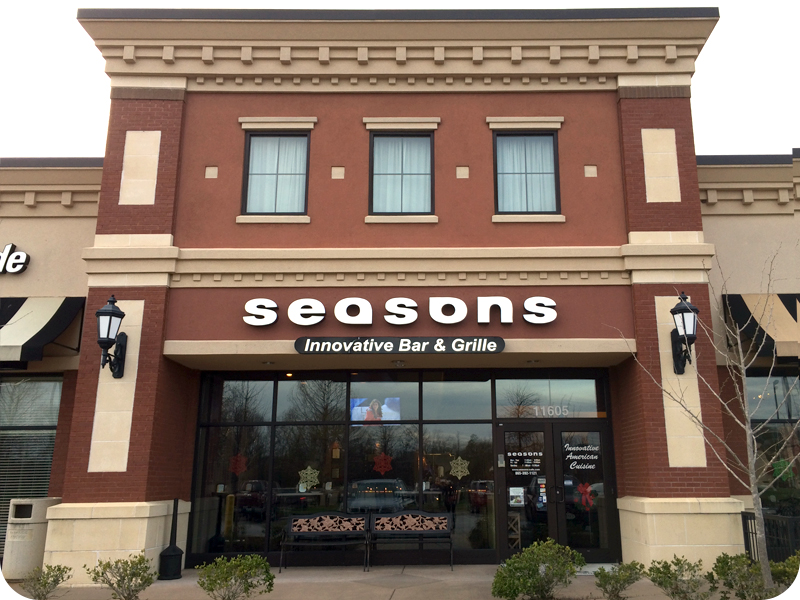 Is everyone fat, happy, and rested after the holiday weeks? I know it's a major drag to return to reality after some time off, but don't despair - Valentine's Day is just around the corner!

(just kidding, I kinda hate Valentine's Day, but that's apparently how we are expected to feel since the shops around here already look like they've been hosed down with Pepto Bismol)

It's been forever since I've done a restaurant tour, but there's a very good reason for that: I haven't even been to a restaurant since last summer!  Our one year-old is, hrm, rather high maintenance, and going to a restaurant only serves to make the people around us stare daggers into our souls.  So, we were excited to run away to a pre-Christmas date while our friends offered to watch the babby.  We chose Seasons Innovative Bar & Grille, a new-ish establishment in the Turkey Creek shopping center of Knoxville, Tennessee.

Since I wasn't planning on blogging about this dinner initially, I'm afraid that iPhone photos will have to do, but they get the job done in a pinch. This meal ended up being too good not to share with all of you. 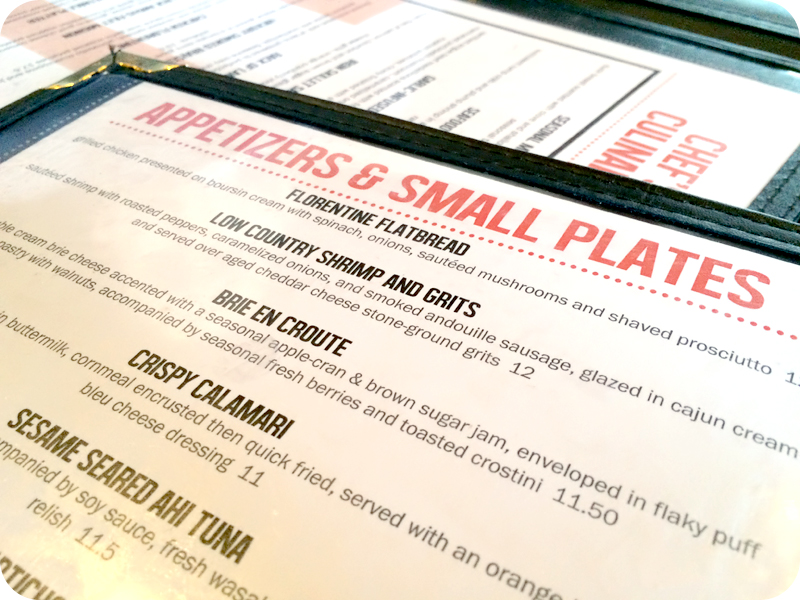 Seasons has a diverse menu that is updated with seasonal ingredients and special offerings. 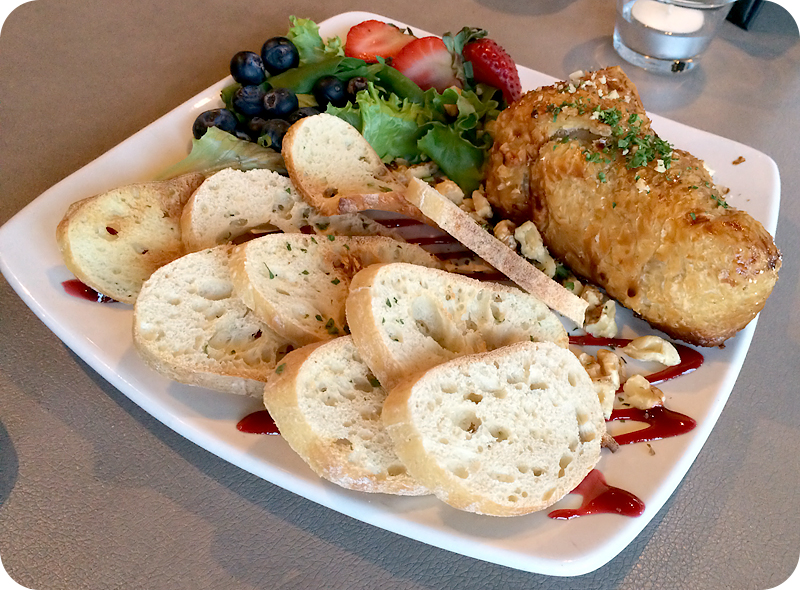 We started with the brie en croute appetizer.  When we see brie on a menu, we have to order it.  This was a gorgeous plate featuring warm puff pastry wrapped brie served with apple-cran brown sugar jam, walnuts, and berries.  And of course some little crostinis for spreading and dipping.  The pastry was crisp, the brie was creamy, and there were so many different flavors on the plate to play with.  Great way to start the meal. 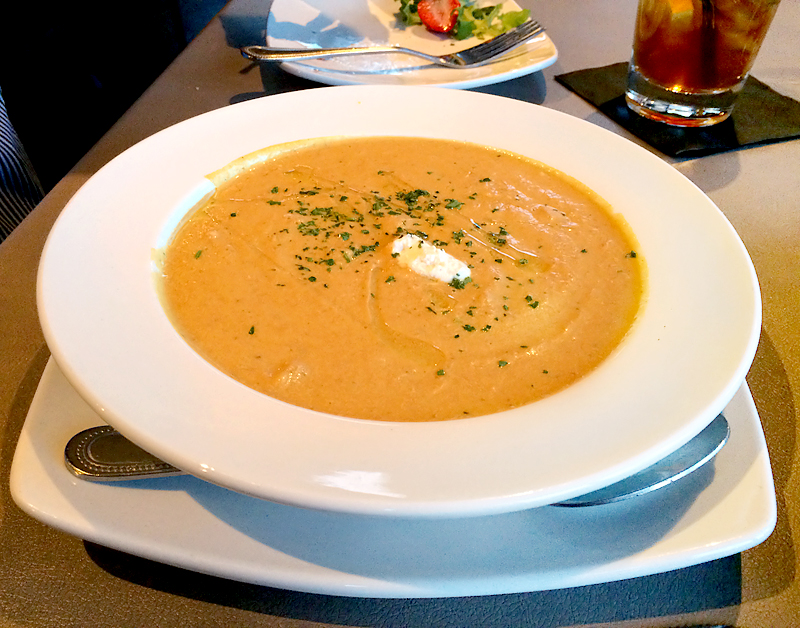 Matt ordered a second course of pumpkin bisque, and I may or may not have stolen a few (or more...) bites.  I'm not usually a fan of bisque as an appetizer because I find it to be pretty heavy on its own, but I regretted my decision to not order one for myself because this was lovely.  It tasted like a holiday in a bowl, and the nutmeg creme fraiche and subtle shallot oil drizzle was a nice touch. 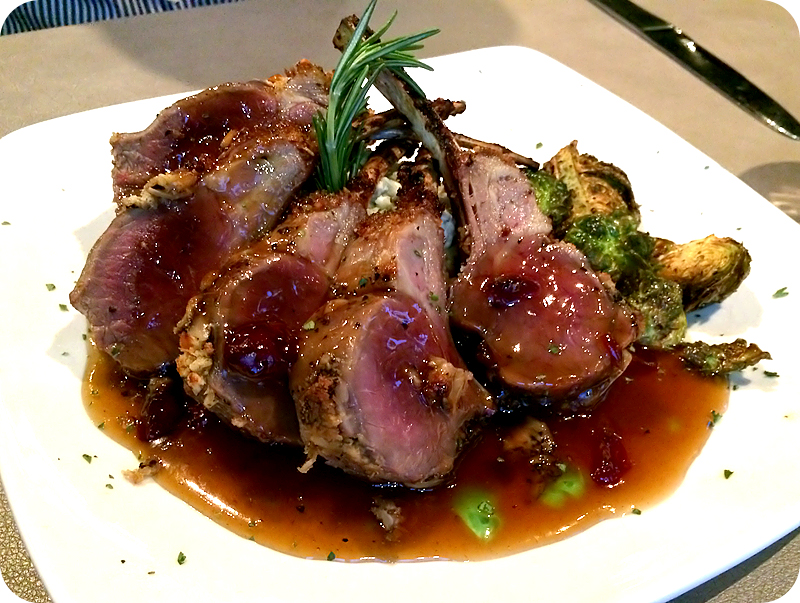 For the main course, Matt chose the almond-crusted rack of lamb served over a Kentucky mint bourbon sauce with cranberries and a bed of blue cheese mashed potatoes.  The lamb was perfectly prepared and again, the plate was full of so many different and interesting flavors that all worked together nicely.  The special vegetable of the day was fried Brussels sprouts, and I can't say enough good things about them.  The outside leaves were so crispy it was like eating veggie chips.  I could have polished off an entire plate of just the sprouts! 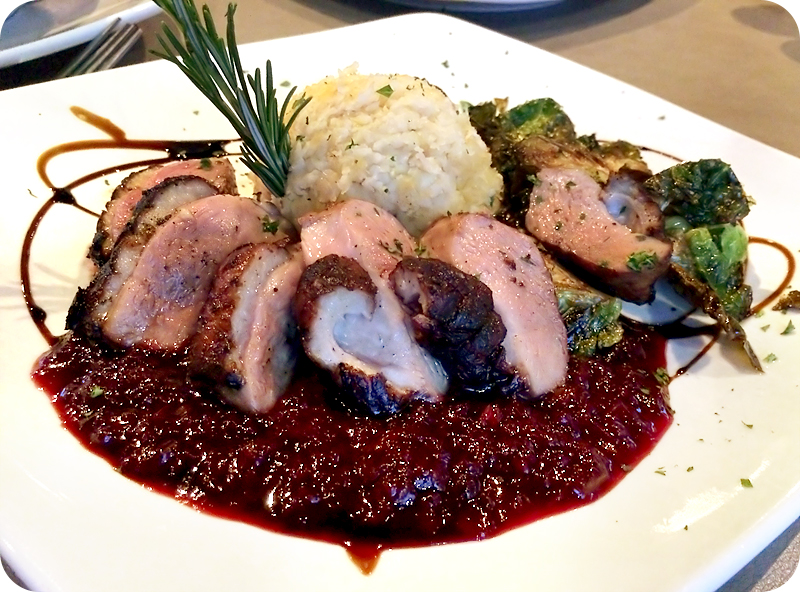 I ordered something I have never had before - smoked duck breast!  Prepared with cloves and shallots, served over a tasty tart cherry glaze with a side of cheese grits and fried Brussels sprouts, I can highly recommend this dish.  The grits were slightly toothy, just how I like them, and with the perfect amount of cheese. 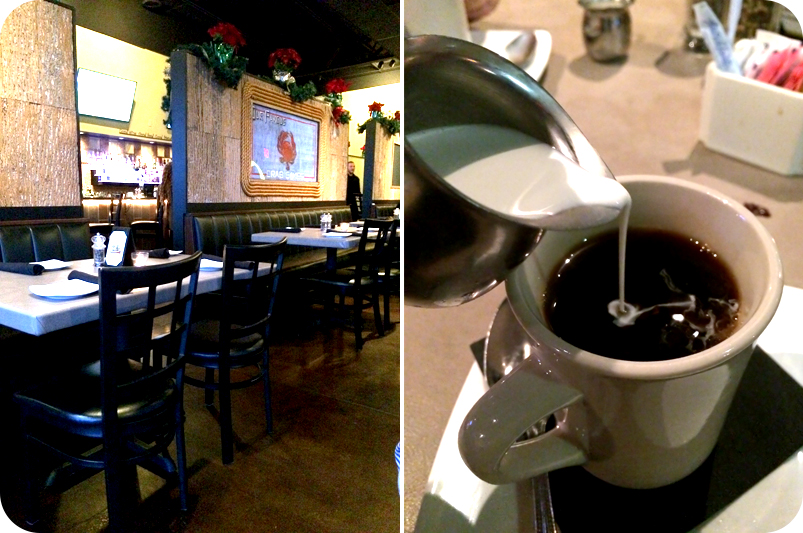 Though we were stuffed after finishing our entrées, we did not want to miss out on trying some dessert. While letting our food settle we ordered a round of hot coffees (strong and good) and did what any parents do when they manage to get an evening to themselves... we talked about the baby. 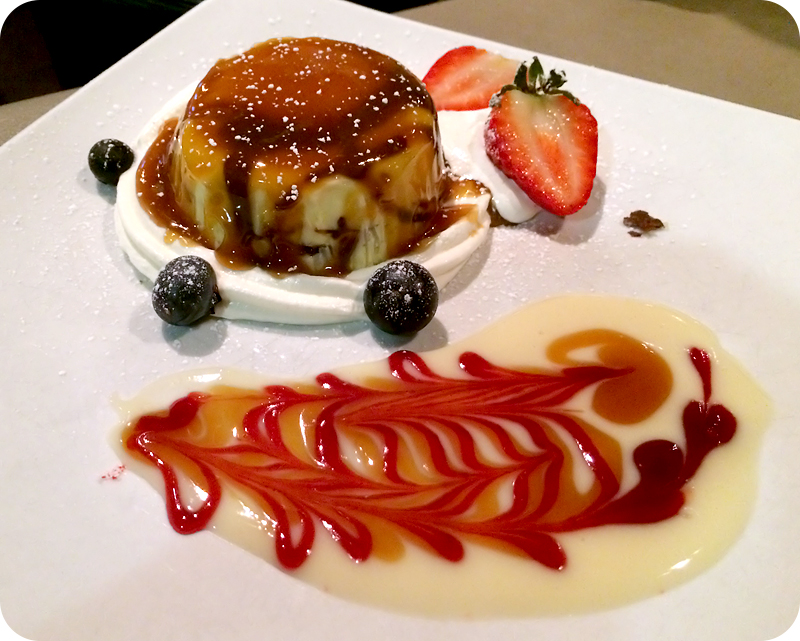 Finally, it was time to order something sweet.  We chose the creme caramel, which can be described as a cross between creme brulee and flan.  It's a custard-based caramel pudding with a layer of caramel on top.  It was served with fresh berries, whipped cream, and a pretty swatch of something that I can't quite remember... but it was creamy and fruity.  And delicious. 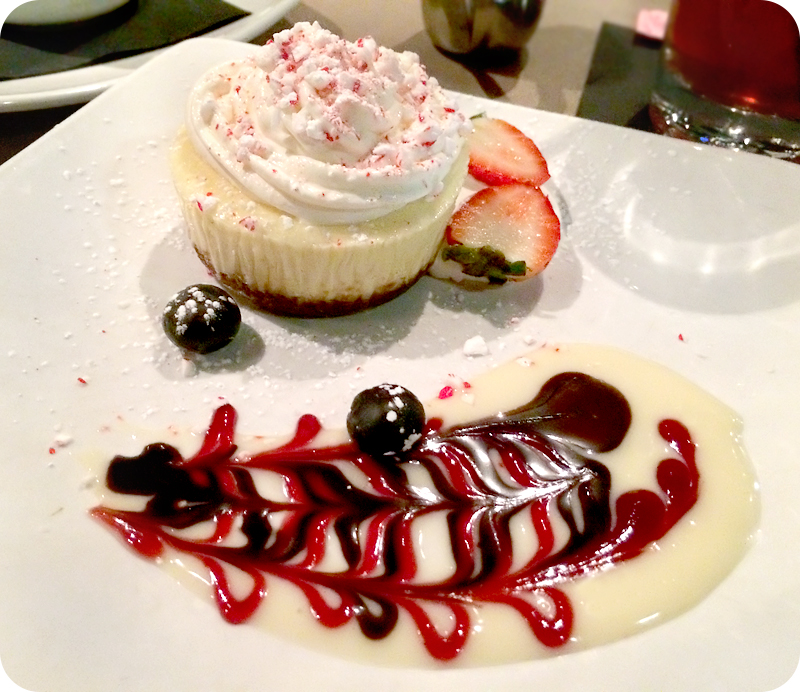 We also wanted to share something festive, so we chose the peppermint cheesecake topped with whipped cream and crushed peppermints.  I appreciated that the desserts were small and were the perfect sweet finish to the dinner without making you feel overloaded and sick.  The plates were presented so nicely and were as fun to look at as they are to eat! 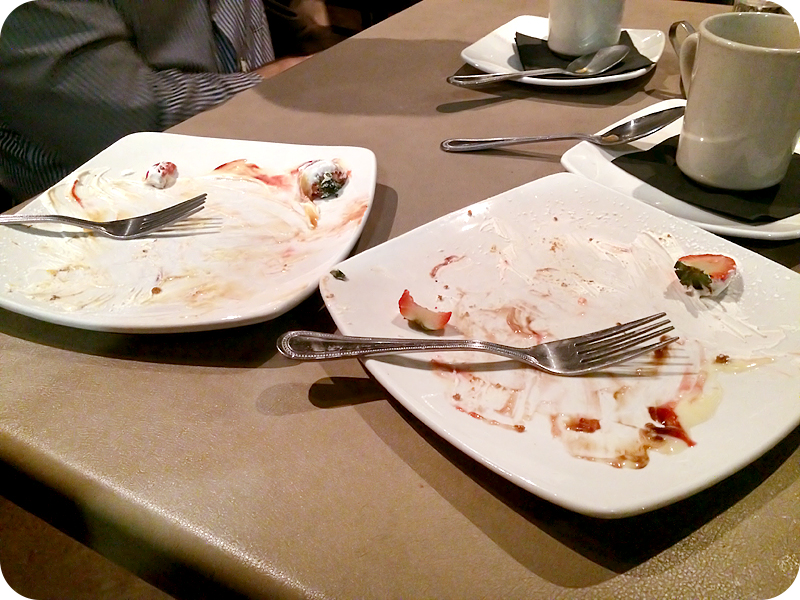 As you can see, we didn't much enjoy the desserts.  Nope, not at all.

I highly recommend giving this place a go if you're looking for something new in the Knoxville area.  You won't regret it!