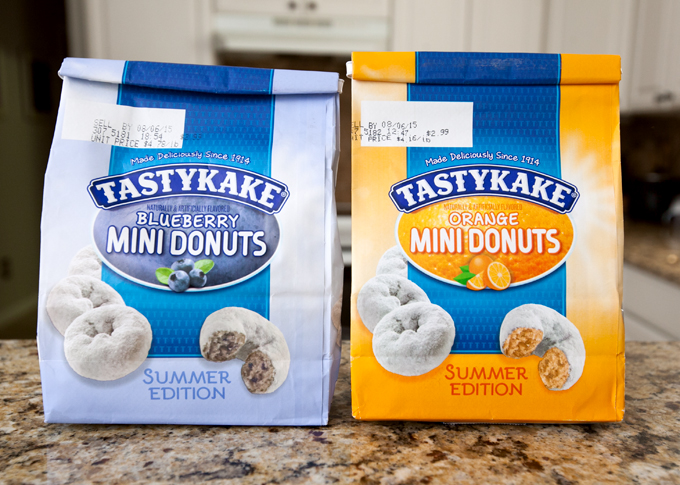 Confession:  Before this taste test, I had not eaten a powdered donut since I was a teenager.  That's more than a decade ago, folks.  During my less healthy younger days I quite enjoyed these messy, sinful little torus-shaped treats.  They are the kind of indulgent dessert that are best enjoyed behind closed doors away from the prying eyes of others, because there is no elegant way to eat these things.  No matter what you do, you're going to get powdered sugar friggin' everywhere.  On your fingers, on your clothes, and all over your mouth.  The evidence of your culinary sins is impossible to hide.  Unless you happen to be this gal: 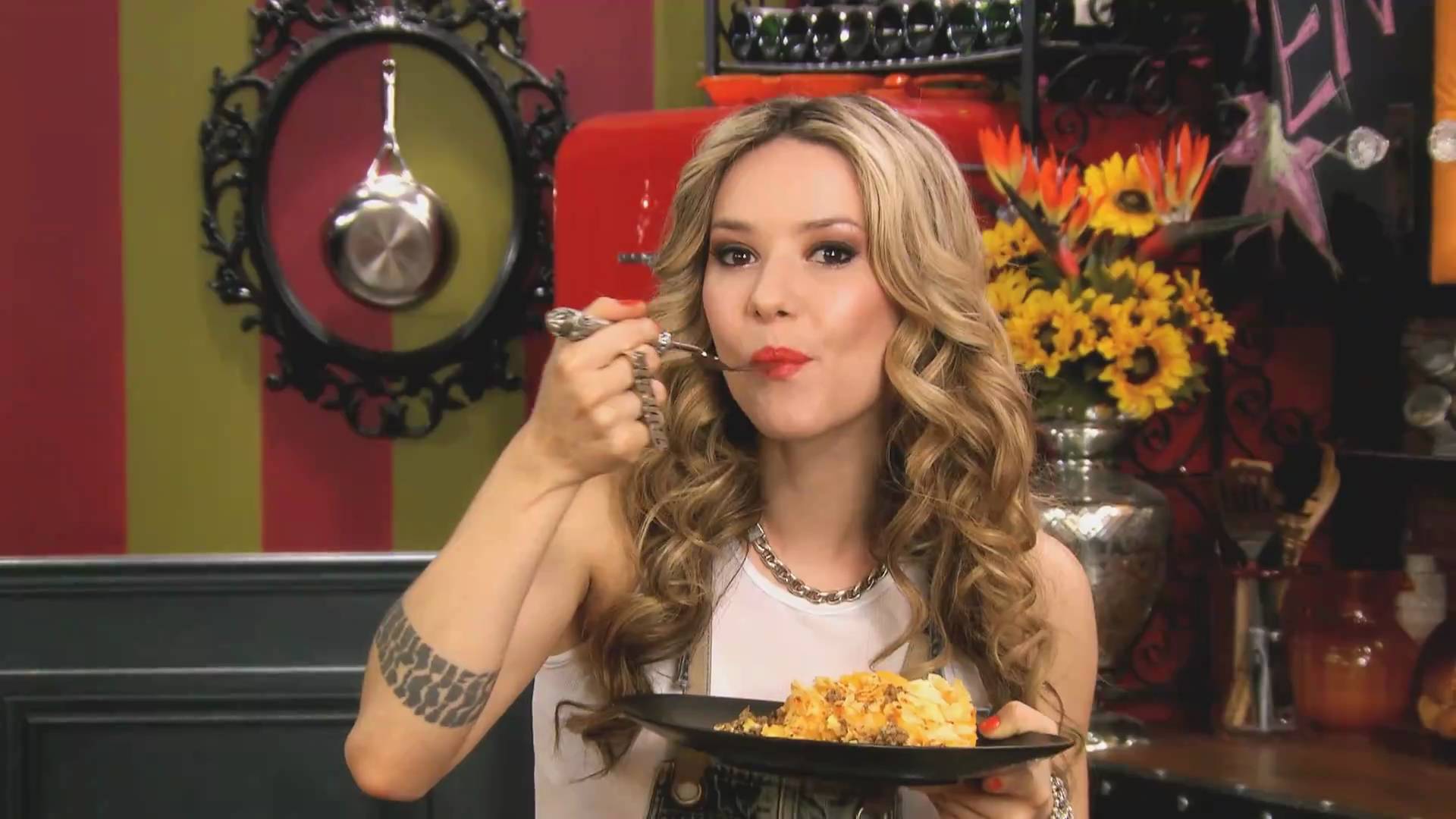 Seriously, she never even smudges her lipstick!

Tastykake asked us to review their limited edition line of summer-flavored treats and though we don't indulge in things like this too often (real talk, I have a freezer full of goodies because I hate wasting food but we don't eat unhealthy stuff often enough to finish it before it goes stale) you guys know we can't resist a fun "NEW" or even better, "LIMITED EDITION" product, so I said send 'em over, we'll give 'em a go!

Oh, and I'm not even gonna post the nutrition facts or ingredients list for this stuff.  I don't wanna know.  You probably don't wanna know either.  But on the off chance that you do, I'm sure Google can help ya out! 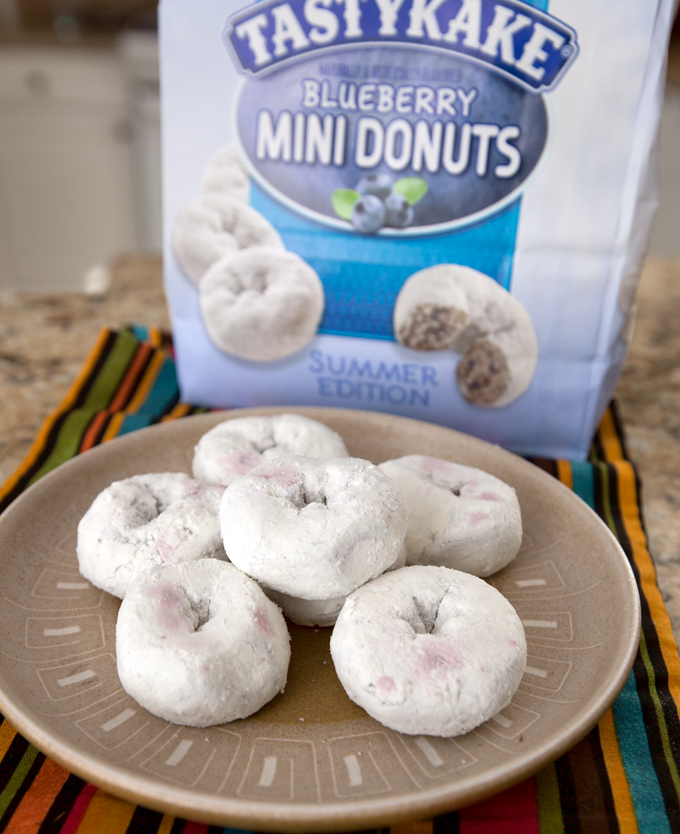 First we tried the Tastykake Blueberry Mini Donuts.  On the exterior, little bits of leaky purpley-ish blueberry coloring on the powdered sugar coating is visible.  Taking a sniff, I didn't get much of a blueberry smell, but whatever.  The whole point of a powdered donut is the metric truckload of confectionery dust that beshrouds these dangerous little sugar bombs. 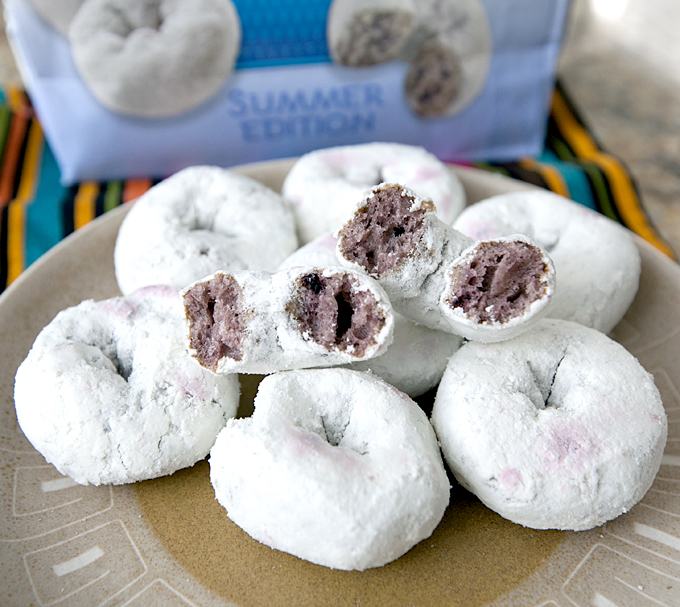 I busted one of them open and found a rather bright shade of purple.  Maybe even some darker areas of actual blueberries.  Taking a bite (and marking the occasion of my first powdered donut since my teen years) I got a chewy donut texture, the in-yo-face sweetness overload from the powdered sugar, and the flavor of a mild blueberry muffin.  These were good as a super-sweetened treat and I can see how they'd be too easy to eat, a downfall of any powdered donut, but I think if they had a little extra juicy tartness from the actual blueberries then these would have been a knockout.  As is, they're tasty, but just not spectacular. 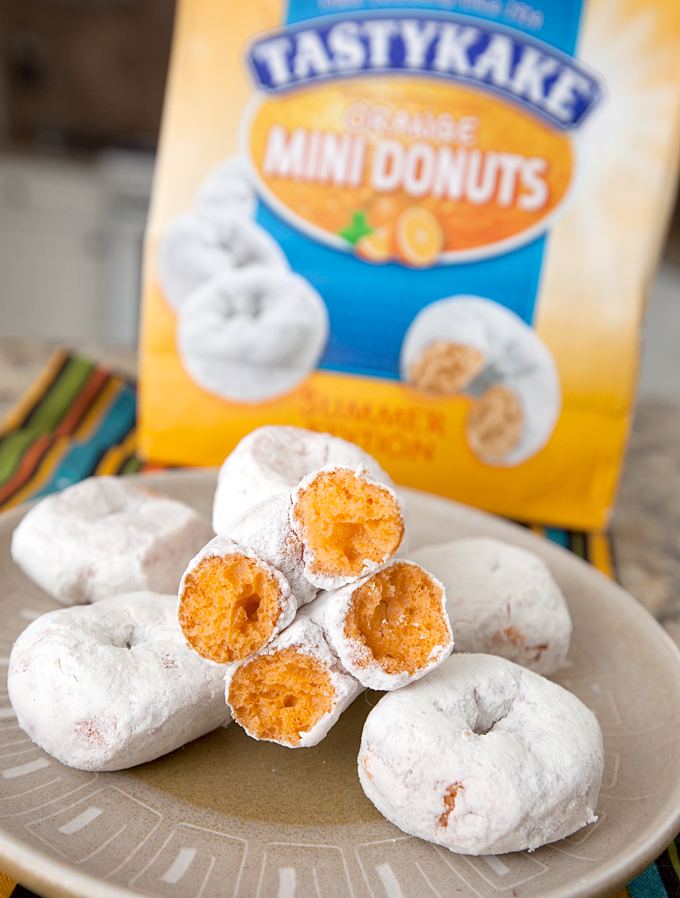 I was intrigued by the Tastykake Orange Mini Donuts since I am a fan of citrusy-flavored cakes and confections.  Plus, I've never had an orange cake donut before (or an orange fried donut, for that matter).  These smelled mostly of a regular powdered donut with a hint of candied orange and on the inside I found a shock of orange-colored cake.  I bit into one and found that the cake was a little more moist than the blueberry version.  The orange taste was mild, super sweet and lacking that nice citrus bite that I like to have, but I did prefer these over the blueberry version.  My overall opinion is much the same - while not wholly spectacular, they're easy to eat and a fun summer flavor to try.  General fans of powdered donuts will get a kick out of 'em. 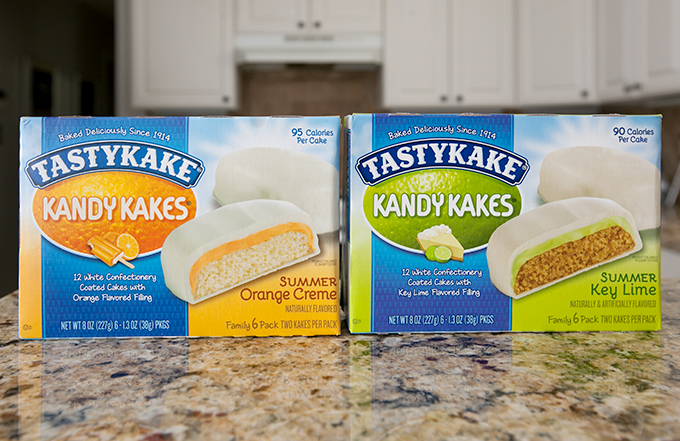 Next we tried TastyKake Kandy Kakes in Summer Orange Creme and Summer Key Lime.  We went into this one completely blind as neither of us have ever had a Kandy Kake before, so we have nothing with which to compare the limited edition varieties of these treats.  Ooh, the anticipation... 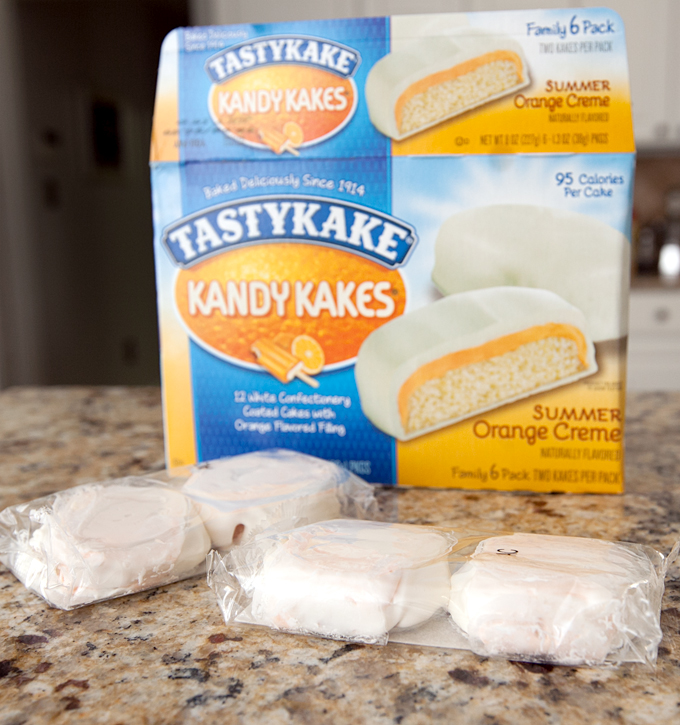 There are six 2-packs of cakes per box, and they are 90-95 calories per individual cake depending on the flavor.  Though I'm unfamiliar with the Kandy Kake line, I'm gonna venture a guess that the thick, soft candy coating ("confectionery coating" as it states on the package) is a key feature of this product. 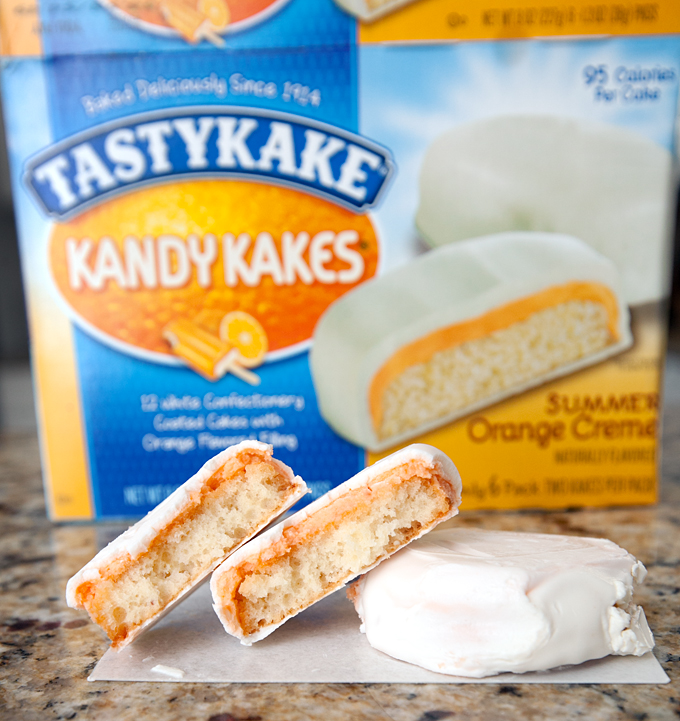 So... Summer Orange Creme first, then. I broke one in half for photographic purposes and was pleased to see that the orange filling spanned the length of the cake and continued down the sides, just like is shown on the package.  I took a bite and found the orange flavor of the filling to be quite pleasant.  The cake itself is a bit dense and not very sweet on its own, which is a nice complement to the filling.  Gotta be honest, though, I'm not a fan of the candy coating.  It doesn't add much in the way of flavor or texture and it's way too thick.  If it had been used as a very thin glaze to keep all of the insides of the cake together then it would have been much better.  In fact, Matt and I chipped off much of the coating of the cake we shared for this review and agreed that these were much better without it. 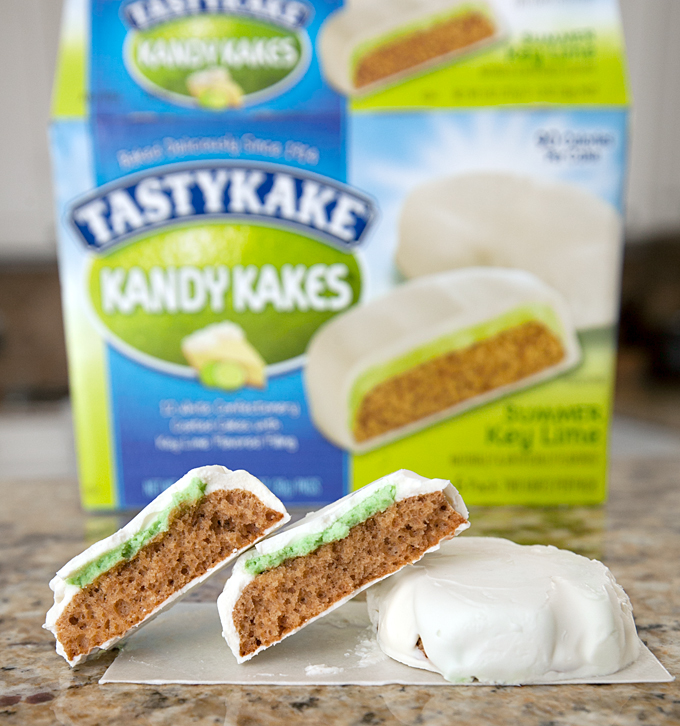 When I saw the packaging for Kandy Kakes Summer Key Lime, I immediately thought of Key lime pie.  Heck, there's even a picture of a pie right under the name!  When I broke one open I was surprised and a little confused to find a dark cake.  When we took a bite, Matt asked if it was supposed to be a spice cake.  I also thought it tasted much like a traditional spice cake and when I checked the ingredients list our suspicions were confirmed with the presence of cinnamon and nutmeg in the ingredients!  Giving it a bit more thought, I bet the cake is supposed to be representative of the graham cracker crust of a Key lime pie.  The lime filling itself is tasty with a sugary citrus flavor one would expect from a packaged lime-flavored product.  As you can see from the photo, there is significantly less of the lime filling than what is found in Summer Orange Creme but the candy coating is just as thick, if not thicker.  As a "Key lime pie" I think these miss the mark.  But ignoring the thick coating, they're not too bad as a spice cake with a little bite of lime.

And now for today's question: In the comments, tell me your most shameful snack - the one that you'd rather eat in private when you're sure no one else is watching.  Confession is good for the soul, my friends!

* The title of this post is a quote by Oscar Wilde: "Between an optimist and pessimist, the difference is droll.
The optimist sees the doughnut, the pessimist the hole!"

We received samples of Tastykake's summer line for the purposes of this review.  We do not accept free product or compensation in return for a fully positive review.  Remember our motto: if it sucks, we'll tell ya!

« Holy Crap, We Bought an RV! Camper Tour
Things To Do at Dole Plantation | Trip Report »