Our first morning on the ship, we awoke to find our little room rockin' and a rollin'.  A quick peek outside told us everything that we needed to know.  The sky was dark with clouds, there were a few sprays of water on our window, and the water was extremely choppy.  It was a sea day, so we knew we were in for a rough ride.

Matt and I have been lucky enough to never experience full blown seasickness on a cruise.  I'll feel a little bit off-balance when in windowless rooms (like the theater or in the bathrooms) on choppy days, but for the most part I'm unaffected.

We quickly learned, however, that this particularly rough sea day was going to put quite the damper on the fun for a few of our members.  Matt's mom and my dad were pretty much down for the count for most of the morning. We had a brunch reservation at Palo for 12:30, and once it became clear that they were in no condition to be eating anything, I called and tried to reschedule.  Unfortunately, the brunch was only being held on the two sea days of the cruise, and the other one was already booked.

Why was it already full, you ask?  Well, because the sweet receptionist told me that there was an epidemic of seasick passengers that day and that many of the brunch reservations had been rescheduled.   Fabulous.

So!  Brunch time came around and Matt's mom decided that she wasn't up for being around food and went back to her room to rest.  My mom convinced my dad to at least try to go, so he weaved and wobbled his way up to the top deck while the rest of us watched him warily, expecting him to projectile puke at any second. 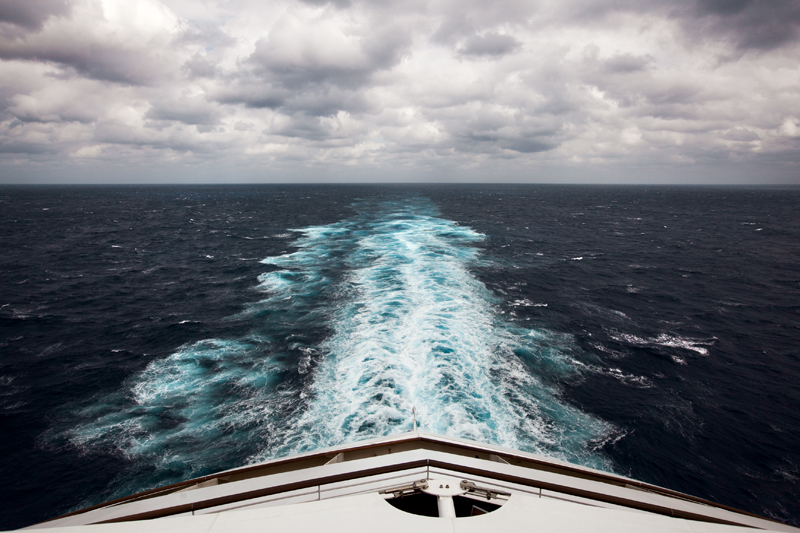 This is from the outside balcony between Remy & Palo.  You can see the dark, heavy cloud cover and the little white caps on the water.  It was not a very pleasant day!  While we were waiting for our table to be ready, I suggested that we go out to the deck so my dad could see the horizon and get some fresh air on his face. 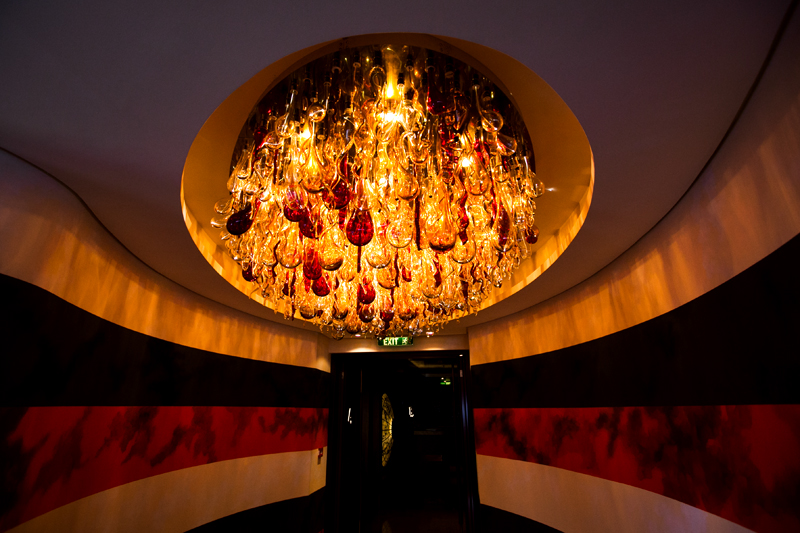 Awesome light at the entrance to the restaurant.  I want one.  I don't know where I'd put it, but... I want one. 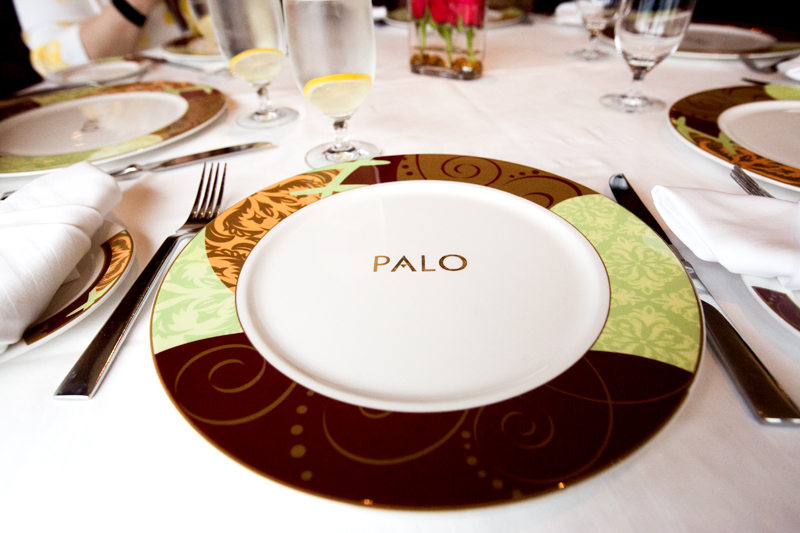 Show plates.  A member of our little group (I won't say who) made a comment about the waiters always 'taking the plates' as soon as you sit down.  It was quite funny. 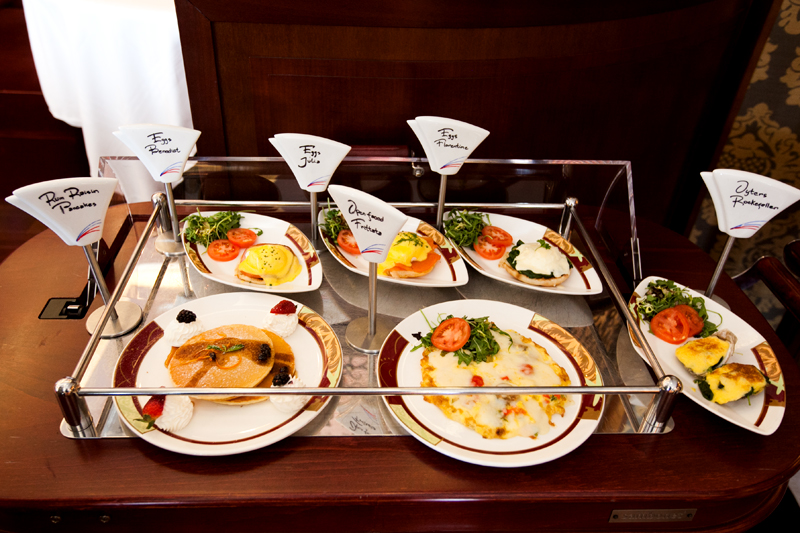 After ordering our beverage, which include a complimentary glass of Prosecco (plain or with orange juice!) or sparkling cider, we got our tour of the buffet.  These are the a la carte "main dish" items that you can order from the kitchen. 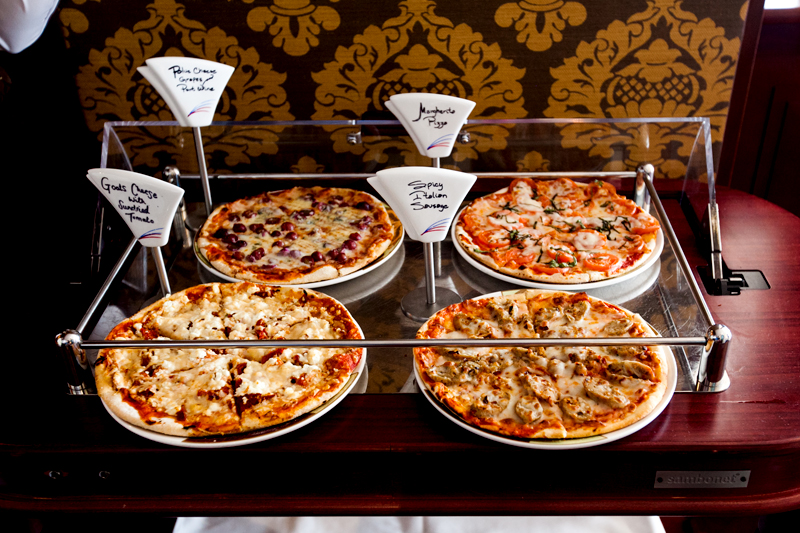 A selection of pizzas.  We ordered a goat cheese and sundried tomato for our table to share. 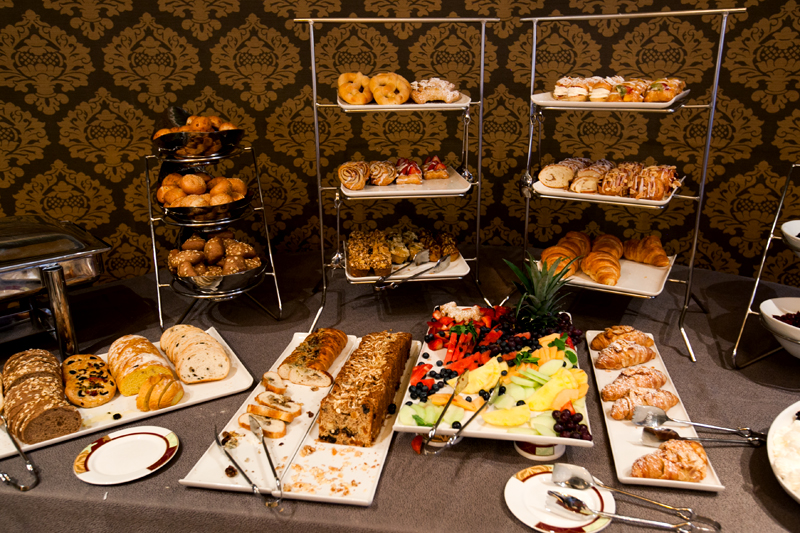 The bread and pastry section.  Gotta say, I loved the Disney Fantasy, but the Palo Brunch spread on the Magic beat the pants off of this one.  The selection was very similar, but the presentation was more attractive on the older ship.  Primarily, the cause for that was location.  On the Fantasy, the buffet is set up on plain tables in a dark windowless corner of the restaurant.  On the Magic, the display plates are better arranged and the buffet is in the middle of a bright, sunny section of the room. 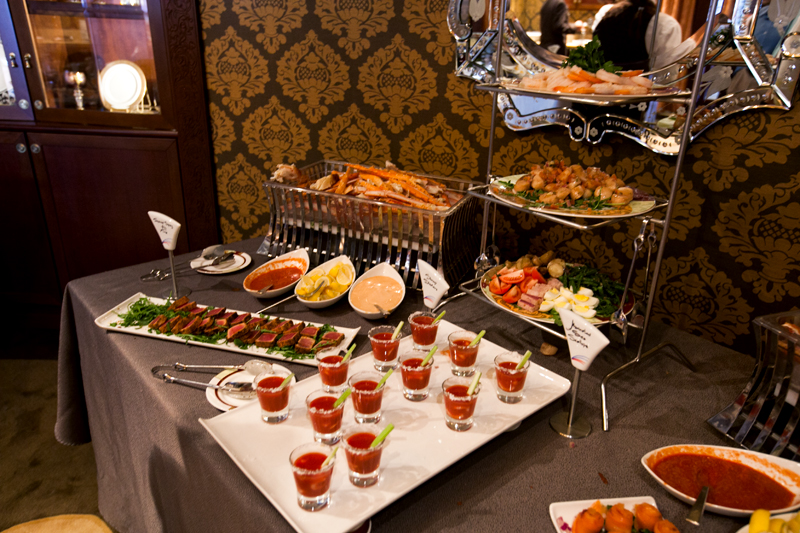 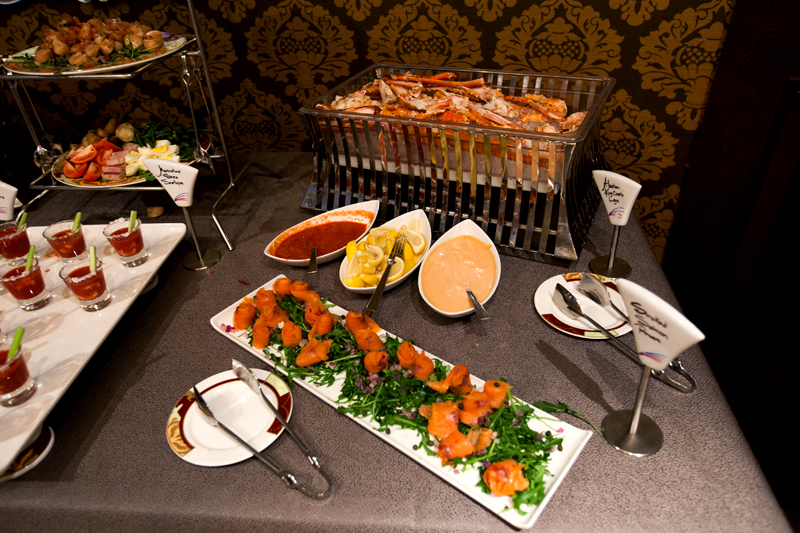 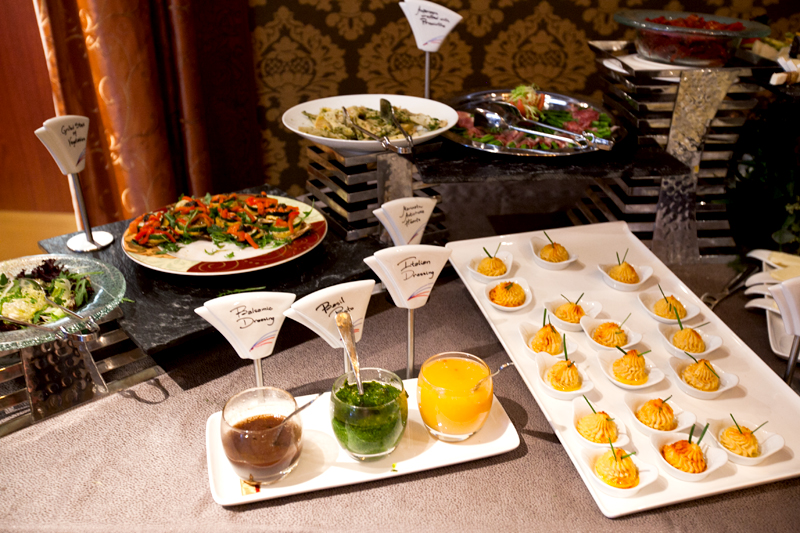 Not long after we sat down to our first round of appetizers, my dad started looking even paler than he did when we first sat down (which was impressive in intself).  He stated that he was going back to the room and bolted from the restaurant without so much as a goodbye.

Anywho, we finished our appetizers, sampled the goat cheese pizza (which was incredible, and I must learn to make it at home), and then this happened... 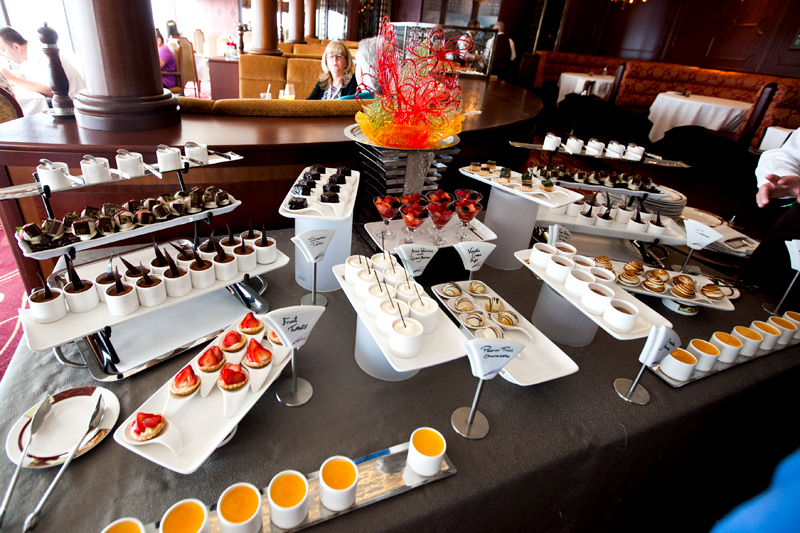 The dessert table.  Your server will tell you about the tiny "magic spoons" that you have to use to eat your Palo desserts.  Supposedly, these mythical spoons remove all calories from the sinful delights. 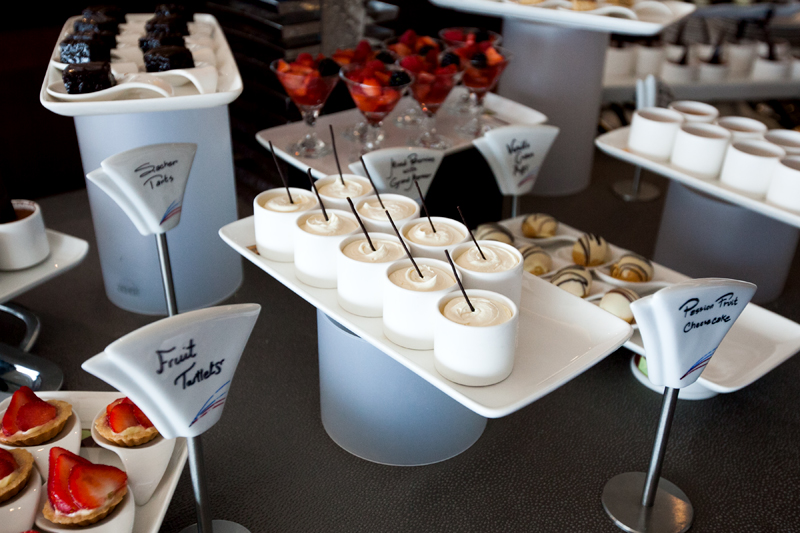 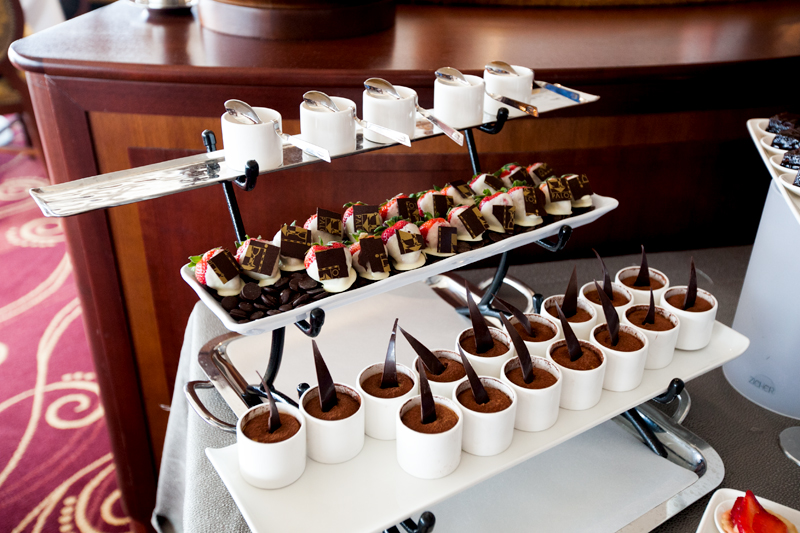 Because I have my suspicious.  By the way, those little mini tiramisu shots kicked butt. 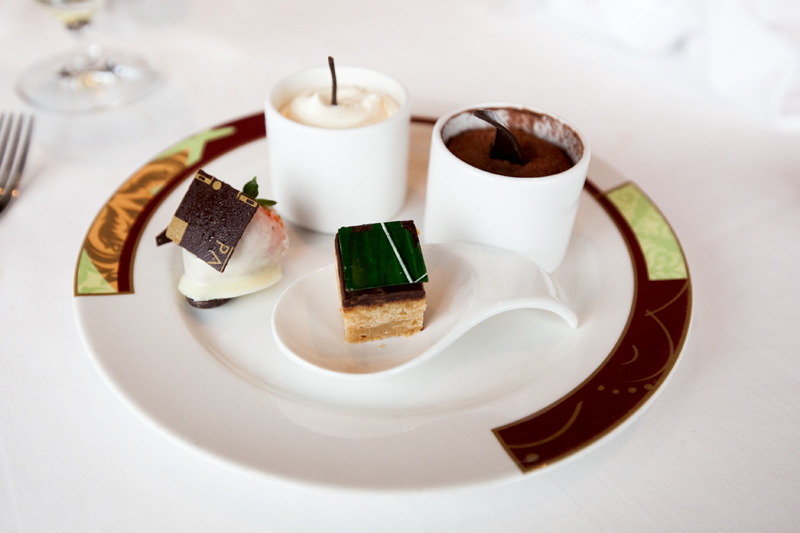 We tried a sampling of several things! 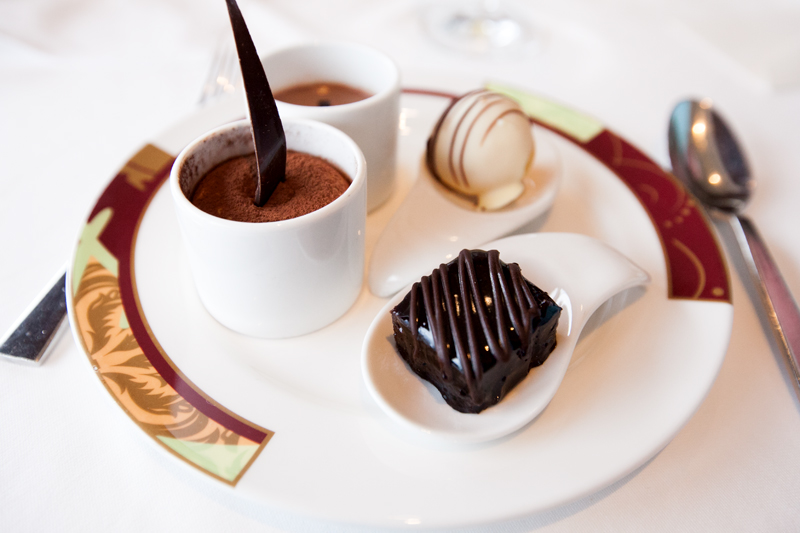 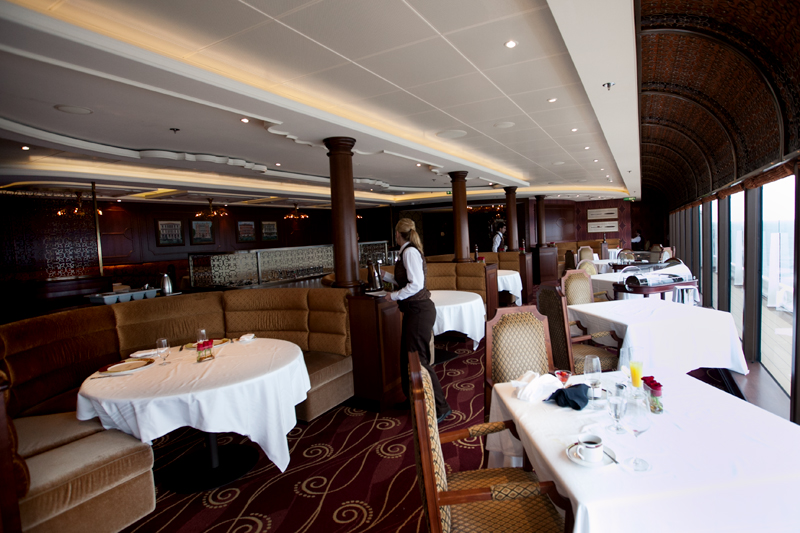 If you needed any more proof of how many people were sea sick that day... the restaurant was completely empty by the time we left.  There were a few people there when we first arrived, but it seemed like nobody stayed long.  The table next to us was a young couple, and the wife was looking a bit pallid and was nibbling on nothing but a green apple that the waitress brought from the kitchen.

Despite the absence of part of our crew, the brunch was wonderful!