It's time again to board a magical carpet and be whisked away to a trip report for another of our annual Disney cruises! 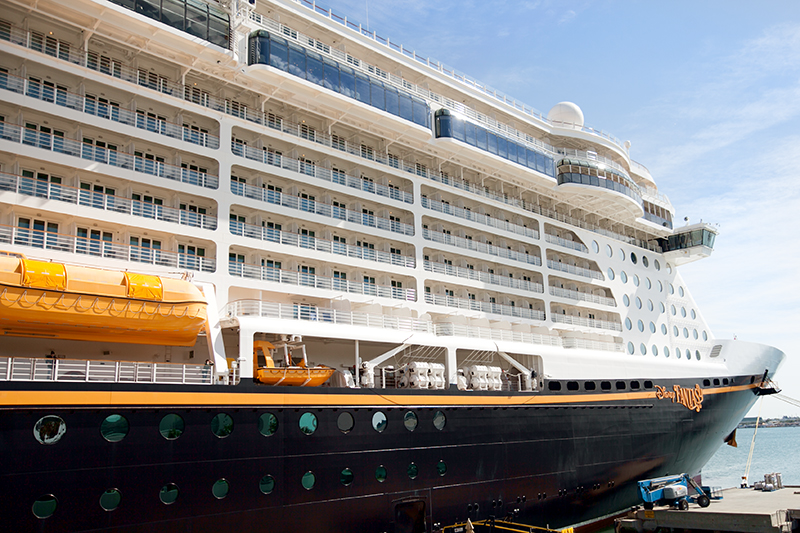 This time we were on board the newest ship in Disney's fleet - the Fantasy!  A nearly identical sister of the Dream, we were so excited to explore! 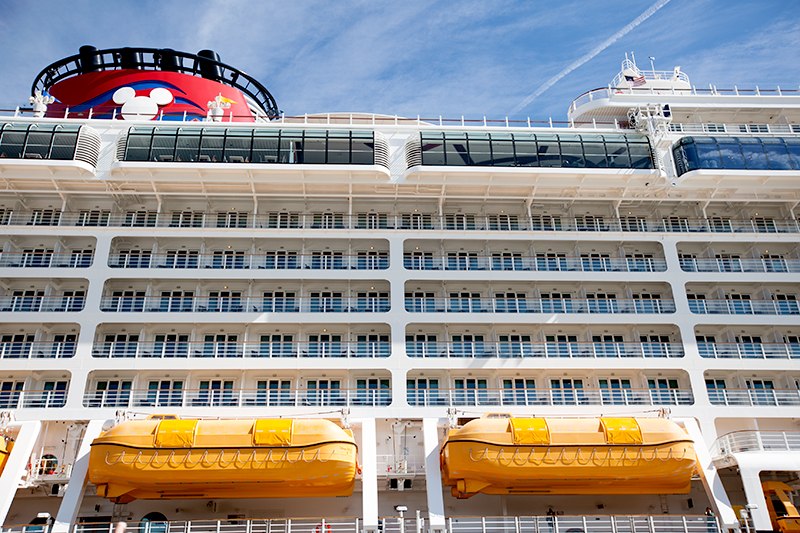 There was one very big difference between this cruise and the ones of years past... 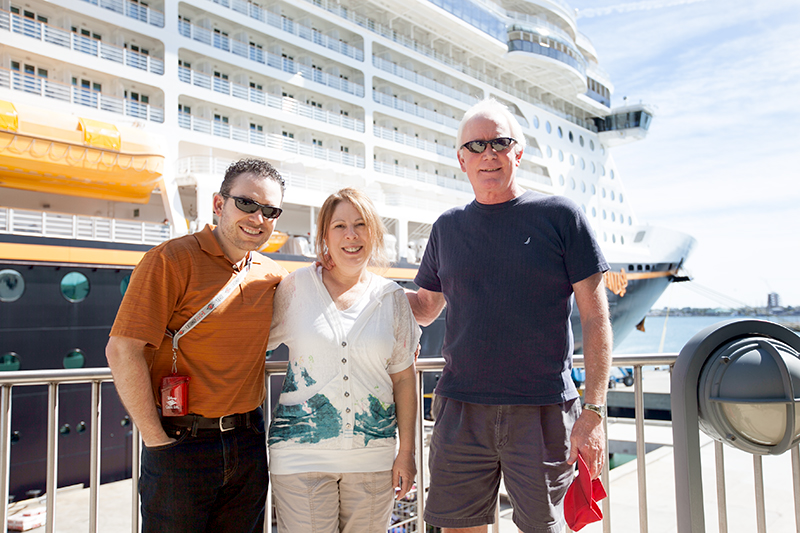 .... Matt's parents came along with us!  They were pretty easy to convince and we had their room booked within a couple of weeks of pitching the idea to them last year.  The one that surprised me, however, was that I also managed to make this happen.... 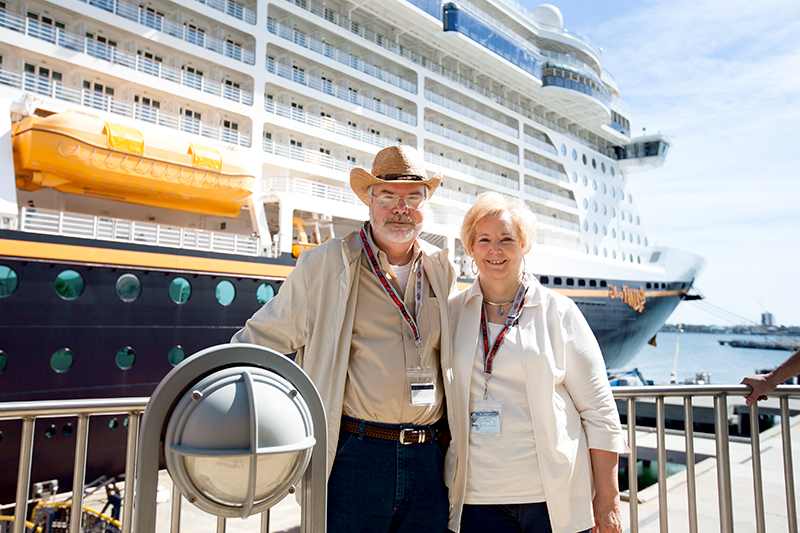 ....MY parents came along too! Making this happen was no easy feat.  It took a lot of arm-twisting, begging, and then, after the cruise was booked, many months of enduring phone calls insisting that they needed to cancel for this reason or that reason.  But uh huh, no way, we weren't taking "no" for an answer.  I still didn't believe they were actually there until they were standing  in front of the ship on embarkation day. 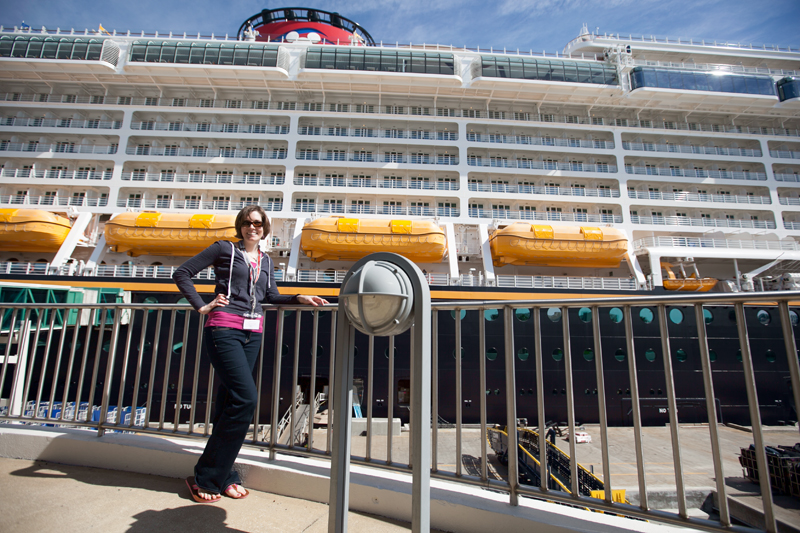 Yeah, I hope Disney never has cause to use those yellow lifeboats.  Did you know each one of those suckers holds over 300 people?  Standing right next to them, it just doesn't seem possible.  I'm convinced they chloroform their guests in an emergency and stack them up like a pile of luggage before cutting the boat loose from the ship.  Cuts down on the panic, you know. 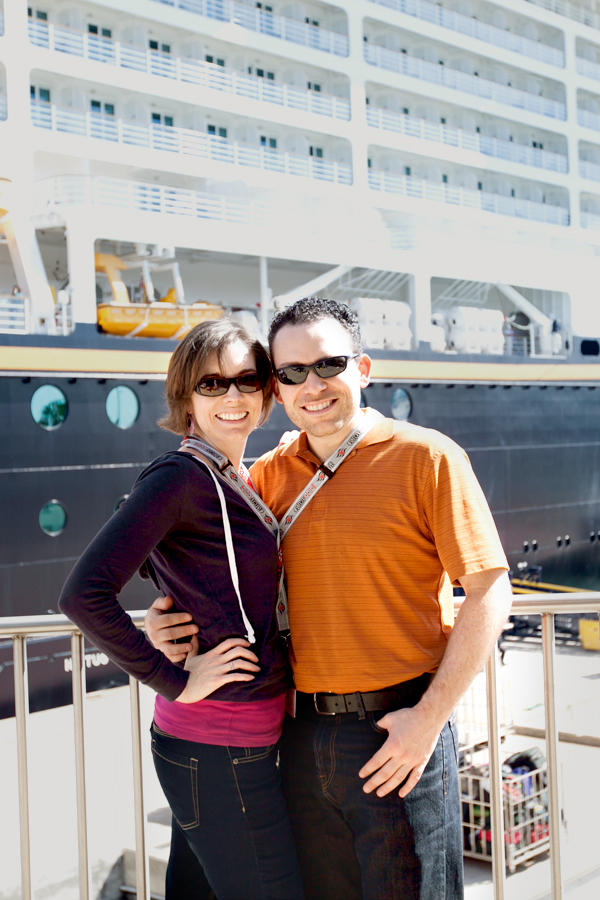 My cruise buddy (he's kind of my husband, too).  Little did we know that our first cruise would spawn a yearly tradition! 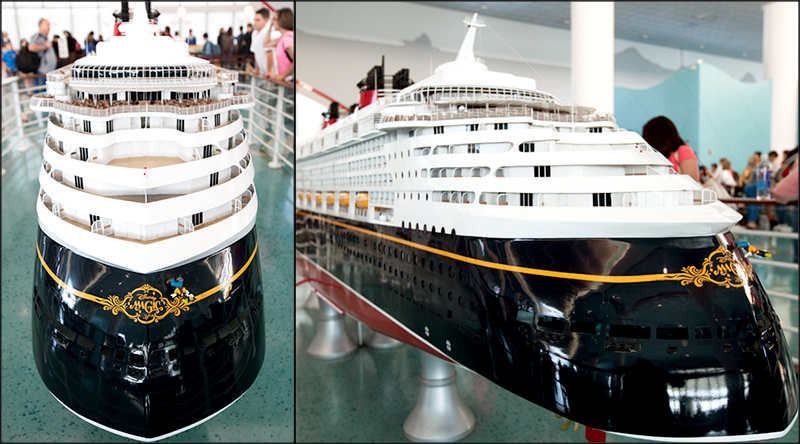 After we took the requisite photos from the terminal's outside patio, we headed inside to check out the model of the Disney Magic.  If there's a Disney cruise in your future, don't miss spending several minutes admiring the detail in this model.  It's quite impressive! 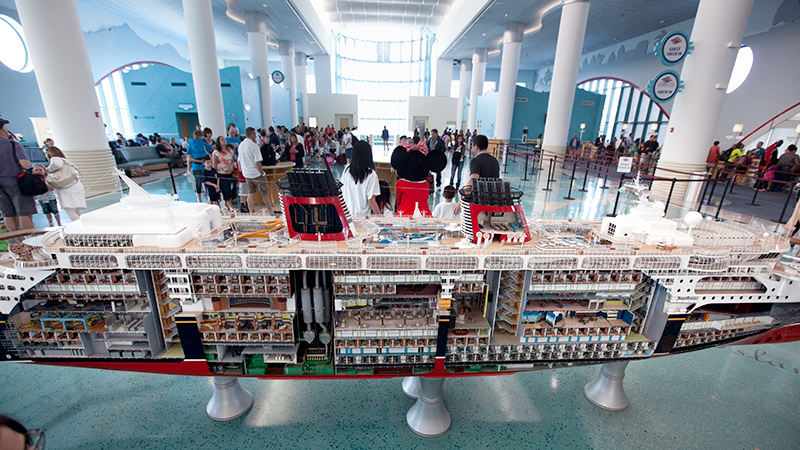 The backside shows a cutaway of the inside, and as a lover of dollhouses and teeny tiny miniature versions of real life things.. I get lost peering into all of the little tiny rooms. 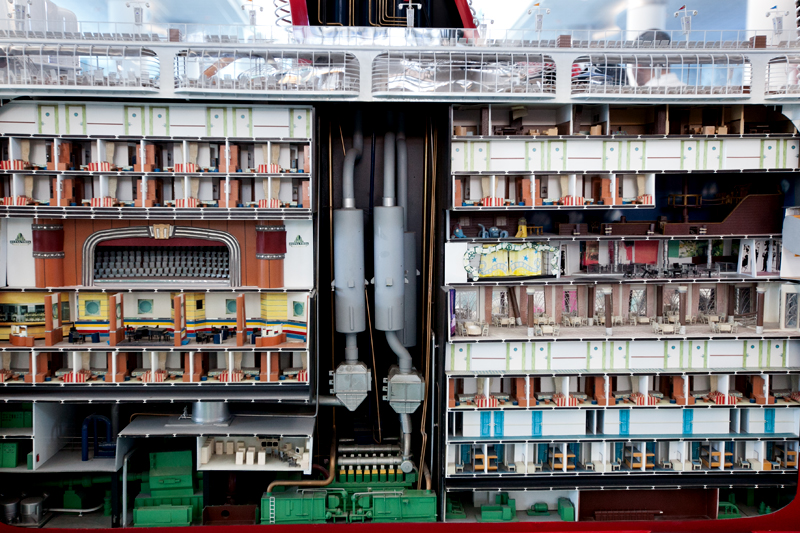 See? Even the little staterooms have teeny tiny beds with teeny tiny comforters. 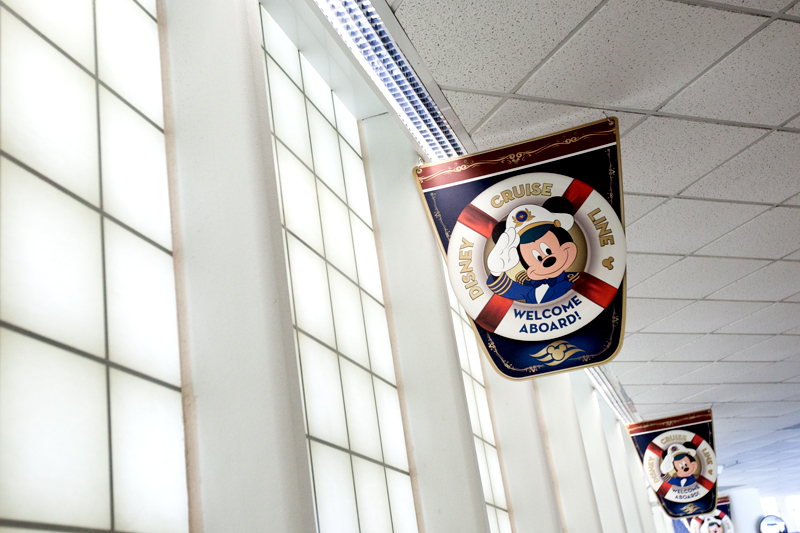 After a pleasantly short wait, our boarding group was called and we made our way onto the ship!  The line is slow at first, as every family is stopped for a photo, but there are several photographers working so it's not too much of a delay.

Once you step onto the ship, a crew member will lean toward you and ask for your last name.  You think they're being polite?  Oh no.. as soon as you utter the name, that deceitful crewperson produces a microphone that was hidden behind his/her back and announces your arrival to the whole blasted ship!  The announcement is followed by a roar of cheering and applause from the other nearby crew members as you duck your head and meekly step into the main lobby, fighting the urge to sprint behind the nearest Mickey Mouse statue. 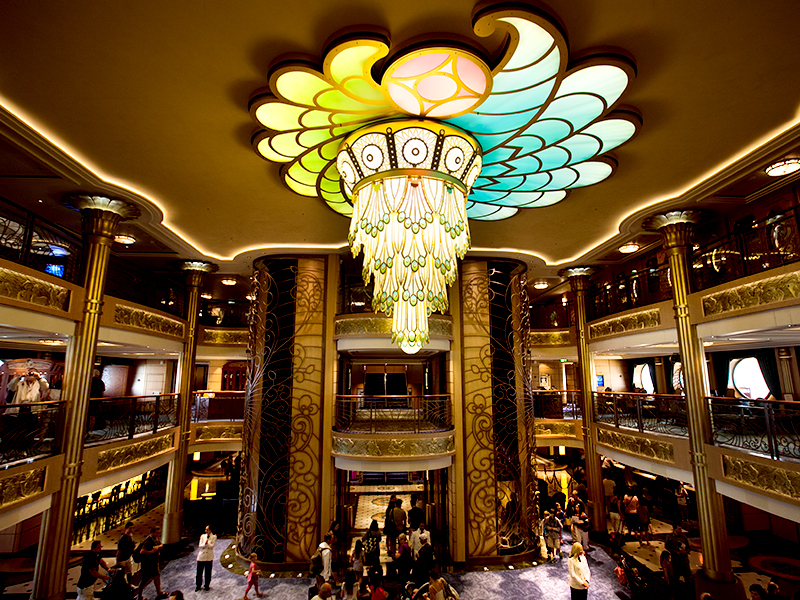 The main lobby of the Disney Fantasy.  While the Dream's color scheme included a lot of blue, the Fantasy's injects a whole lotta green, and it's tastefully integrated into much of the decor on the ship.   The peacock feather theme seen in the chandelier is also found in the carpeting in many areas (more photos of that later!) 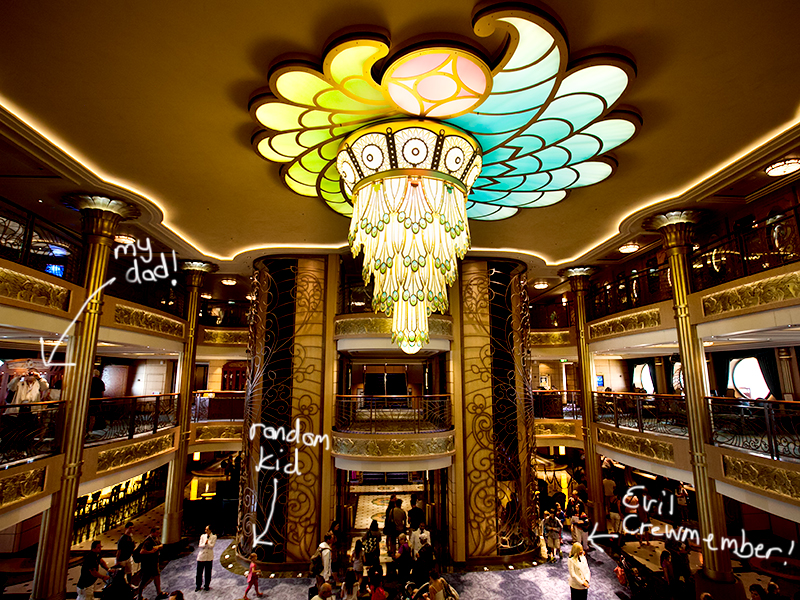 So I noticed something when getting this photo ready for the blog.  My dad appears on an adjacent balcony, and seems to be taking a photo of me taking a photo of the lobby.  Yeah, can't wait for THAT to pop up on the internet somewhere. 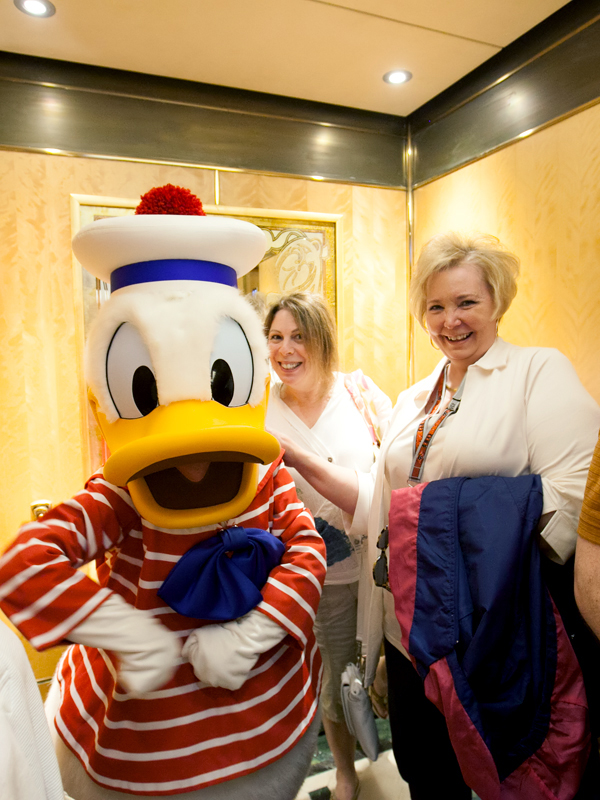 While we were making our way to Deck 9 to check and see if our stateroom was ready, the elevator doors opened and this fella was standing there!  My mom and Diane jumped over for a photo, and then the following conversation took place:

Diane: Where are you headed?

Donald pointed toward the ceiling and then lowered a flattened hand (wing?) to the ground, palm-down.

Donald nodded wildly and excitedly, which consisted of him flailing around enough to make his big cartoon head shake in an affirmative manner.

Donald's Attendant: We're headed up to the children's club!

(yes, all of the non princess/prince characters are followed around by an attendant/body guard.  It seems the sole purpose of these attendants is to translate the body language of the characters, since they are obviously unable to speak for themselves in the proper voice.  Can you imagine how scarred you would be if, as a child, you spoke to Donald only to have a deep, husky male voice respond?  Or worse.. the delicate voice of a female? I mean, that's years of potential therapy right there, and maybe even a lawsuit.  Disney is saving themselves millions of dollars, man.)

(I also like to think that another item in the attendants'  job description is to body check any small child who gets a little rough with the webbed-foot besailored duck.  But that's just me.)

Me: Oh! I mimicked the flattened-palm hand motion he just did. Children's club.. little people.. got it.

Our elevator dinged Deck 9 and we waved goodbye to Donald.  He responded with more excited spastic body movements and I briefly worried that he was having a seizure, but then quickly dismissed the idea.   We headed to the hallways and found, to our delight, that the velvet stanchions blocking the corridor had been removed and we were free to go check out our rooms!  Next up, stateroom tour!